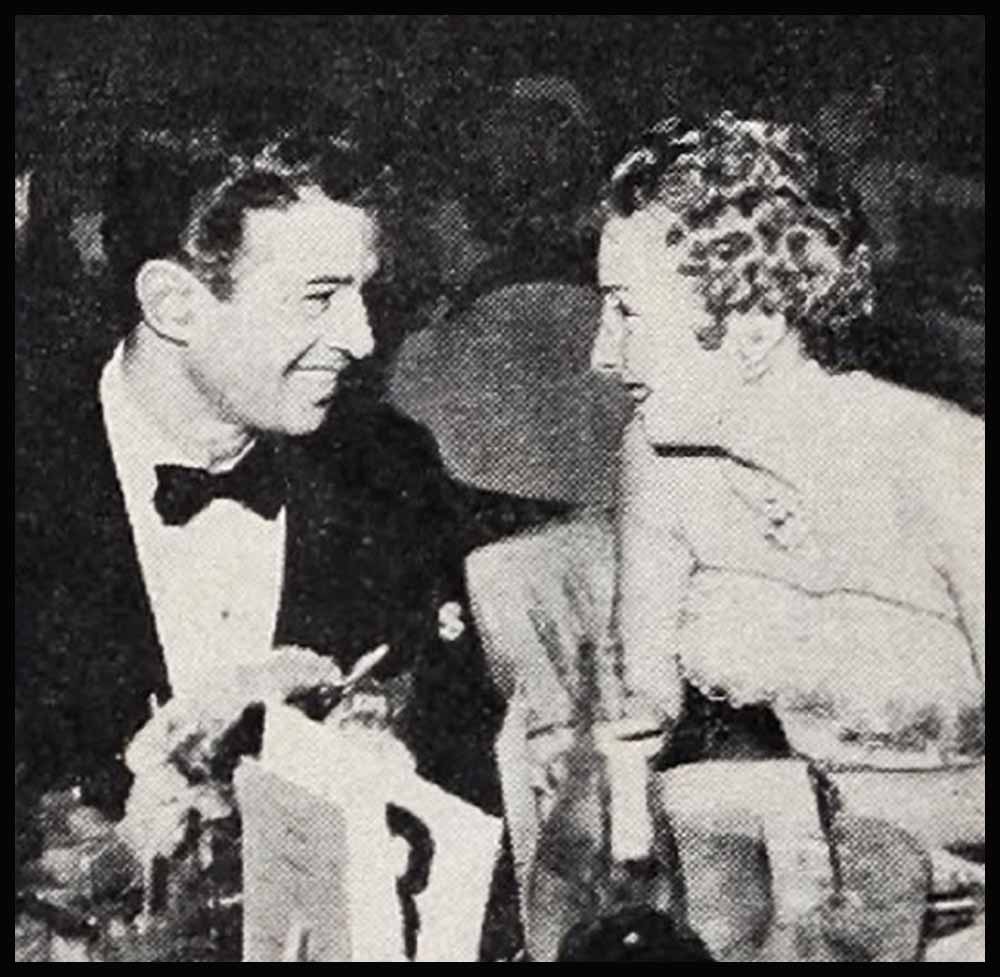 If most Hollywood didn’t have “preemitis” this month, it wasn’t the fault of the studios which fancy-preemed two big pictures within a week of each other. One of these preems was followed by a large party. But there were other openings and parties that brought out the glitter-crowd.

Biggest event was the long-awaited opening of “The Robe.” I can’t remember seeing a bigger star and studio-brass turnout. Most of the celebs who streamed into the theatre, sashayed over to Romanoff’s later to sip, sup and dance to Freddie Karger’s divine beat. Jean Simmons, under Stew Granger’s beaming eye, took congratulations for her performance, wear ing a lovely gown of draped white jersey, floor-length, topped by a tong, white jersey stole banded in dark mink. Susan Hayward was in a light beige lace, ballerina-length gown; Betta St. John, so delightful as Miriam in the film, wore emerald green taffeta, trimmed in velvet; Joan Caulfield, a blonde doll in black crepe. Joan’s spouse, Frank Ross, who produced “The Robe,” is one of the best p dancers in the world. The gals kept Frank dancing all eve and the kudos kept him in a daze for days!

Surprise twosome at the same preem: Mona Freeman and Bob Wagner. Mona in a flowing, floor-length gown of white net, with panels of coral net hanging from shoulders to hemline in back. Arlene Dahl (in pink and white net) with Fernando Lamas (natch); Marilyn Erskine, in white sequin-trimmed satin and net, was with Richard Gully—on account of Donald O’Connor was away; Ginger Rogers, plus much poundage—she’s more than plump; Barbara Stanwyck, in a short, strapless, full-skirted dress of rose and gray net, was on Gilbert Roland’s arm; talented TV actor George Nader; Debra Paget with her brother; Vic Mature; the Bob Mitchums; Joan Crawford, with Nick Ray, was a symphony in gray lace, gray mink stole—and hang on! She had her hair dyed gray to match!

Before the party, Joan had quite a hassle at the theatre. Seems she lingered so long in the lobby that when she got to her seats someone else was in ’em—and wouldn’t get out! La Crawford was feeurious and left. Never did get to see the picture—not that night, anyway! And Bob Mitchum got into an argument with an usherette that had the gal in tears. There were almost as many celebs a few nights later when “Mogambo” came to town. Clark Gable couldn’t be there (he was busy in Holland filming “The True and the Brave” with Lana Turner)—but Ava Gardner, looking gawdgess, garnered enough sighs and applause for three stars. She was in a so-low-cut pastel satin gown, skin-tight from bustline to hemline and embroidered all over with beads, sequins and paillettes. Skirt was slit to the knee in front. A long stole of white fox set off her short, short hair-do. Ava’s appearance was rather a surprise. F. Sinatra had told me, just a few days before, she would be with him that same night—when he opened his act in Las Vegas.

Another preem, another party: Glamour galore showed up for the brilliant opening of Ty Power, Anne Baxter and Raymond Massey in their stage fling with “John Brown’s Body.” Glimpsed were June Allyson (in pale blue taffeta with “I think forty-four petticoats,” said June) and Dick Powell; Clifton Webb and his ma; Mitzi Gaynor with Jack Bean (he’d been shopping for an engagement ring that day!); Jeff Chandler with his estranged mate, Marge. Jeff, not to be outdone by Gil Roland’s bright pink dress shirts, has taken to wearing pale blue ones with his tux. Brings out the color of his eyes like crazy! Tom Conway, Roberta Haynes, the MacDonald Careys, Sheila Connolly with Geary Steffen, were others on hand for this big-time evening.

Ty Power tossed a party at his home later that lasted until five ayem. Anne Baxter wore a pale gray jersey dress, with a draped bodice that criss-crossed up into a halterneck. The slim skirt too, was slightly draped. John Hodiak, who had come hack-stage to congratulate Anne during the show, did the durndest thing at Ty’s place. When Anne came in the door, he ducked out the back!

I said previously that I couldn’t remember seeing a fancier turnout than that which greeted “The Robe” preem. True. Nor can I recall a cafe bow that’s ever brought out as many stars as ringsided for Tony Martin s return to the Cocoanut Grove. Aside from Tony’s terrific popularity, the eve was dedicated to the benefit of the Denver Hospital—and Tony donated his salary, along with the Grove’s proceeds that night. over $20,000 was raised, as Martin sang and sang.

Tony’s beauteous Cyd Charisse, breathtakingly lovely in a ball gown of white satin and white chiffon, hostessed a tableful that included Corinne Calvet, in a strapless black velvet, trimmed with a garland of pale lowers across the bustline, with John Bromfield, of course; the Bill Perlbergs; Donna Reed and Tony Owen; Marie McDonald and Harry Karl; Phil Silvers; Bob Taylor and Ursula Thiess there too; and Greer Garson in a flaming red dress —but not quite the right shade to flatter her own flaming tresses.

Jerry Lewis and his cute Patti were tabled with the Spike Joneses. Bob Hope; Kathryn Cray son with Benny Than; Jimmy Durante; Janet Leigh (she being a long-bobbed blonde), Tony Curtis and Donald O’Connor; Debbie Reynolds with John Anderson; Dean and Jeanne Martin were others lending an ear. Before Tony went on, Jer’ Lewis went up to the room reserved for entertainers, tore the draperies down from the windows, tore off Tony’s tie, mussed up his hair, tore his shirt off and otherwise “mussed up the place.” Jerry said he did it to keep Tony from getting nervous!?

An opening of a different sort took place in London (after all, with so many Hollywood names abroad, how can I skip things that go on across the ocean?)—the gala premiere of “Paratrooper.” My spies say Piccadilly looked like Sunset Boulevard. Alan Ladd, star of the picture, was the one overseas star missing. He happened to be toiling in Canada that week. But the following filmville pets were in Blighty—and rolled up to the theatre in Rolls-Royces, Daimlers and such, while an honor guard of Empire Troops lined up at each side of the entrance: Lana Turner and Lex Barker; Clark Gable (who flew over from Paris) ; Ava Gardner and Robert Taylor (who hadn’t yet left England); Cornel Wilde and Jean Wallace; Paul Douglas; Carlos Thompson; Pier Angeli; Mel Ferrer beauing Mary Castle—and lots more. Just like a Hollywood preem!

Agent Henry Willson, the agent who’s given some of your favorite males such names as Rory Calhoun, Tab Hunter, Rock Hudson, Race Gentry, etc., in place of their own monickers, busted out with a nice cocktail-through-midnight party at a new home of his own in Bel Air. Setting was his cellophane-enclosed patio, charmingly lighted with hurricane candle lamps—and a beautiful view of the huge sycamore trees (also lighted) lining the hillside of his property. Rock Hudson mas there with Terry Moore in a strapless cocktail dress—Terry, that is! And talented George Nader, as busy with movies as he is with TV these days; Miriam Nelson; the Keith Andes’; Touch Conners and his Mrs.; John Smith (whose name used to be Bob van Norden!).

Odds and Ends: Gene Nelson—of all people—was emcee for the Diane hand-knit fashion show at Mocambo. Need I add that Jane Powell was one of the many star-models whose outfits Nelson had to describe? . . . Denise Darcel wrote from Paris that the newest craze in that high-fashion town is to carry a “Sweet Beastie”—a little stuffed monkey, turtle, bear, etc., made of the same fabric as the costumes it’s to be carried with . . . But the French gals have nothing on Janet Leigh, who was seen leaving Teitlebaums wearing leopard skin toreador pants!

Terry Moore started a fad with an ermine patch over the eye that had been bothering her for weeks. Shelley Winters, who mas having a little orb trouble herself, adopted the “style.” Shelley really has gone fashion-conscious. Before she went to Las Vegas for her night club debut, she rounded up a group of girl friends and modeled her fabulous PA gowns. Such squeals over the flame and gold and white brocade numbers she pours herself into!