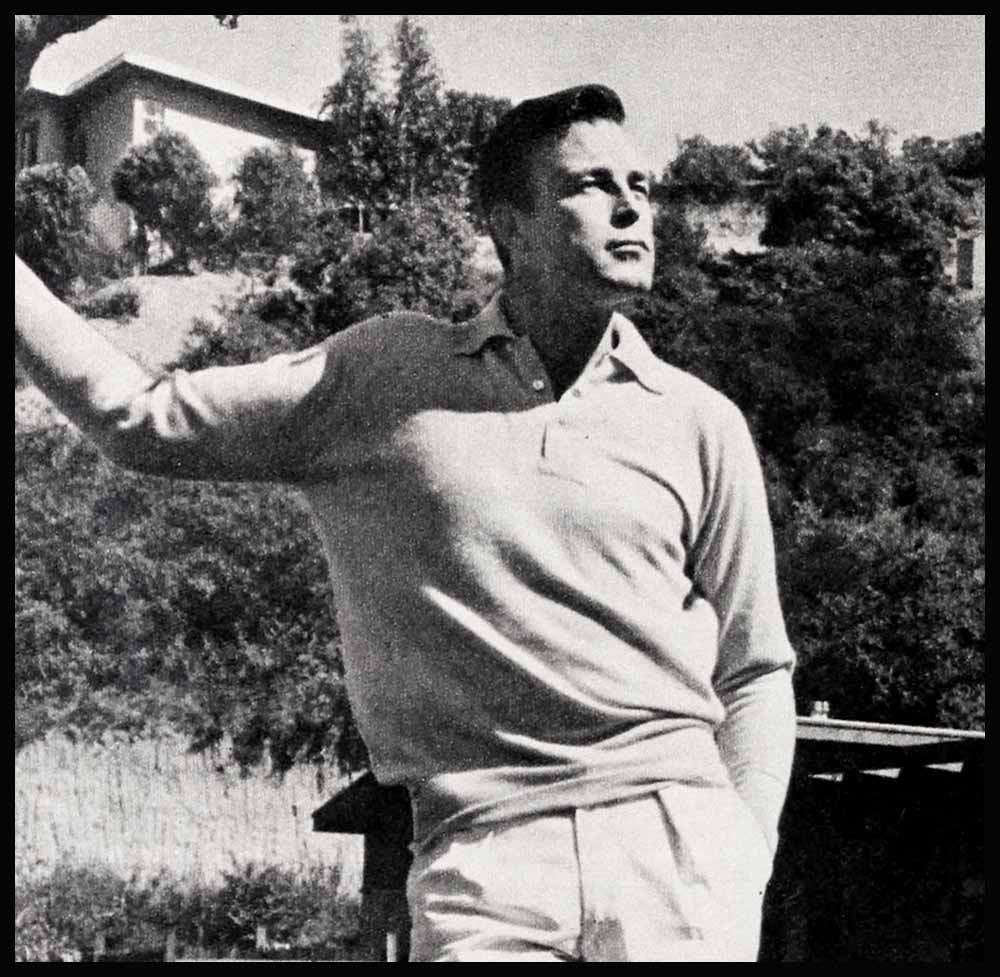 Afraid To Fall In Love?

Scott Brady glared. I had just asked him how come he was such a wolf about Hollywood.

“I’m not a wolf,” he said. “A wolf is a guy whose phone rings day and night with dolls eager for his company. Or he’s ringing dolls’ phones all the time, eager for their company. Neither happens to be true of me. Just because I’m a bachelor, just because I don’t get married . . .”

“That’s exactly the point. Why don’t you? You said, way over a year ago, the night you opened in the stage show of ‘The Moon Is Blue,’ that you’d marry Dorothy Malone the moment she’d have you. What happened? Now she’s dating somebody else! Or what about Elaine Stewart? Or Anita Ekberg? Or Janice Rule? Or Piper Laurie? Or Yvonne DeCarlo? And what about those dates you had with Ann Blyth and that really love-tossed poetry you wrote to her?”

“Now get off my back,” Scott said. “You know that every man who meets Ann puts her on a pedestal.”

“Yes, but Dr. McNulty was the man who put the ring on her finger. Why didn’t you?”

We were lunching at a little sidewalk cafe in Beverly Hills. It was an exquisite day, and there were still tourists in town. Every one of them who was feminine spotted Scott at forty paces, and sighed happily. A score of them came timidly round the hedge that separated the table from the street and asked for autographs. Scott flashed his friendly smile and dashed off his signature, and when the ladies moved on, they were bedazzled.

“Look,” I said. “Just look how easily you made those girls happy But what you’ve done to our Hollywood girls!”

“Now you look,” said Scott. “Practically speaking, I’ve never known anything but Hollywood girls and one of the troubles with them is that they never give you time enough to fail in love with them.

“Oh, I’d dated a few girls before I came here—but after all I was only seventeen when I went into the Navy, and right after I got out, I came West. I’d had one special girl back home in Yonkers, and I did call her, when I got out of uniform. We hadn’t been too serious, just sort of at the hand-holding stage. I hadn’t written to her too much, I’m afraid, but I still thought she’d remember me. So I called her up, asked how about a date, and she said she didn’t see how she could make it. She said she and her husband wouldn’t know where to find a baby sitter on such short notice.

“So then I hit Hollywood—and started to meet Hollywood girls. What a surprise I was in for! These girls are so sane they’re completely unromantic. The first girl I dated out here was typical. I won’t tell you her name because she’s married now, but I’ll never forget that date. First of all, she wouldn’t drink, because that was bad for her complexion. Then she would only nibble on a little food because a square meal was bad for her figure. And she had to be home by nine o’clock because she was due on the set next morning by eight.”

Scott paused. His eyes became serious. “The first sight of these kids out here puts a guy off his rocker. They have the most beautiful faces, and the best figures—but they never relax. Never. I like driving around with the top down on my car—but not these girls. That will ruin their hairdo. I don’t own a tux, but these girls would eat it up if you took them on an every-night date that required a black tie. And this throws you off, because you get a sense they’re not out with you for the pleasure of it, but for the publicity.”

“Oh, now, that can’t be true of all the girls in Hollywood!”

No, of course not. There are some exceptions. Take Dorothy Malone, for instance. There’s a wonderful girl, and a beauty and a fine actress. Maybe I stayed interested in Dorothy longer than I did in any of the others because she laughed longest at my jokes. But she’s got a thing; she has to be a big girl back in her home state of Texas. Can she go back there between pictures and just relax? No, she has to be doing something every moment. once we were in San Francisco together. Could she just have laughs? No, she had to play every hospital in the area. Sure it was a good deed Terrific. But romantic? No! I think Dorothy would make a terrific mother, if she’d settle down. But she’s always racing, always seeking.

‘Maybe the trouble is that Hollywood girls have to dramatize everything. Yvonne DeCarlo, for instance, is a very fine cook—but she takes it too big. I’m a pretty good cook myself, but I can settle for a steak any time. But you get a glamour girl in a kitchen and nothing less than a four-course meal will satisfy her and you starve to death while she’s out putting those special touches on it.”

‘What about the very, very important bachelor girls around town?” I asked. “Girls like Joan Crawford.”

“The Greg Bautzer circuit?” said Scott. “Oh, that’s too big for me. I haven’t got that dignity thing. I don’t want to go to the smartest restaurants every night and play the distinguished young devil. First, I couldn’t get away with it, and next, I like laughs.

“The first thing I have to find out about any girl is if she can take a joke. Why, the first time I had a date with Anita Ekberg I went unshaven. That was an accident, really. I’d come home from the studio and I was all undressed and ready to shave when I discovered I was out of razor blades. The idea of getting all dressed again, out into my car and to the drug store, then back and undressed and redressed seemed just too much. So I put on my things, put the razor in my pocket, and went to Anita’s.

“When she answered the bell, I went right in past her. I’ll be busy for a few minutes,’ I told her, and I walked into her house, I tossed off my coat, found her bathroom and went in and shaved. She laughed like crazy and that made us friends from the start.

“I pulled a stunt like that on Jane Nigh once, too. I had a late afternoon date with her and she told me she was going out for dinner that night with a business-man. She said she had to be on very formal behavior, and that seemed a shame, for such a fun-girl.

“So, just before I was due to leave, I slipped out into her kitchen and left the kitchen door ajar. Then I said good-bye, walked out the front door, and drove my car just far enough down the Street so she couldn’t see me from her windows, but where I could keep a bead on her door.

“Pretty soon, the big-business type drew up in a big car. I waited, and when I was sure they were just settled down to talk I slipped in through the kitchen door. I tiptoed upstairs, took off all my clothes and turned on the shower. Jane came tearing up and pounded on the bathroom door. ‘Who’s there?’ she screamed. I wrapped a towel around me, stepped out and said, ‘Yes, dear?’ She was a real great sport about it, and I must say, so was the guy.”

Scott’s eyes were dancing with mischief. “Of course, she married someone else,” he said. “Not me.”

“And of course,” I said, “you know if you had pulled a stunt like that with Ann Blyth. Ann’s Uncle Pat would have killed you.”

“What are you saying?” Scott asked. “Nobody could think of a stunt like that around Ann. Why, Ann is like that dream of girls you have when you are a kid. She’s perfect, and she’s beautiful, and she has a great talent. Girls like Ann happen only once a century, I guess.”

“So it was your mother you brought along with you to Ann’s wedding reception.”

“Yes,” said Scott, “and Ma nearly chewed my ear off for it. She kept asking me what was the matter with her three boys, none of them making her a grandmother. I tried to calm her down. I pointed out that Eddie had been married for two years, even if he is divorced now. And I told her that though I couldn’t speak for Larry, I could say for myself that the moment I fell really in love, I’d marry.

“The trouble with me,” Scott went on, “is that whenever I meet a girl, and start to get serious, I begin to think beyond her beauty. I get thoughts like if I were married to her, she’d probably hang freshly washed stockings in the shower, and leave combs in the washstand. I’d start to dress and she’d say, ‘No, dear, don’t wear your checked coat. Wear your plain one.’ And she would insist that I eat more salad and less pie. And the night I wanted to stay home, she’d want to go out, or else every fifth night she’d make me climb into a tuxedo and play social.”

There was no point to going into the lecture department to tell Scott how Gordon MacRae says that it’s the things he and Sheila have learned together that have given his life its flavor. It wouldn’t have done much good to remind him how that rugged he-man, Burt Lancaster, goes to PTA meetings with his wife, Norma, and is having a wonderful time planning the kids’ college educations. Or how Alan Ladd says, ‘‘There never is anything I want to do without Susie.”

So I merely said, “Scott, I don’t believe you have ever been remotely in love.”

His face came suddenly very serious. “You know,” he said, “you could be right at that. But I do know this much. A good friend of mine got married not so long ago to the plainest little girl I ever saw. He d been like me. He liked a modern house. He liked good. simple food. He liked to barge around in old clothes.

“One night he asked me to call. I walked into a house all pink lamp shades and furbelows and bows. All the food was fussed up, too, and there was that plain little girl looking up at him as though he’d just dropped down from heaven that morning.

“So I pulled him aside and I asked him how come. Didn’t those bows throw him? Didn’t he miss not seeing glamour girls?

And you know what he said? He said, ‘Is the house fussy? Isn’t my wife glamorous? I’ve never noticed it, because my life’s so wonderful.’ I guess that’s love. Now it I can just find a girl with Ann Blyth’s spiritual qualities, and Dorothy Malone’s sense of tun, and Elaine Stewart’s colorfulness, all pretty neatly packaged, well, I’m available.”

So that’s how it stands with Scott—a sensitive, rather timid guy, who’s trying to hide behind a rather smooth exterior, and who’s getting a little lonely. But one day the right girl will track him down, and she probably won’t look a bit like Elaine or Dorothy or Ann. But she’ll be his evasive ideal. And she’ll get herself a fine husband and S. Brady, bachelor, won’t be frightened any more.