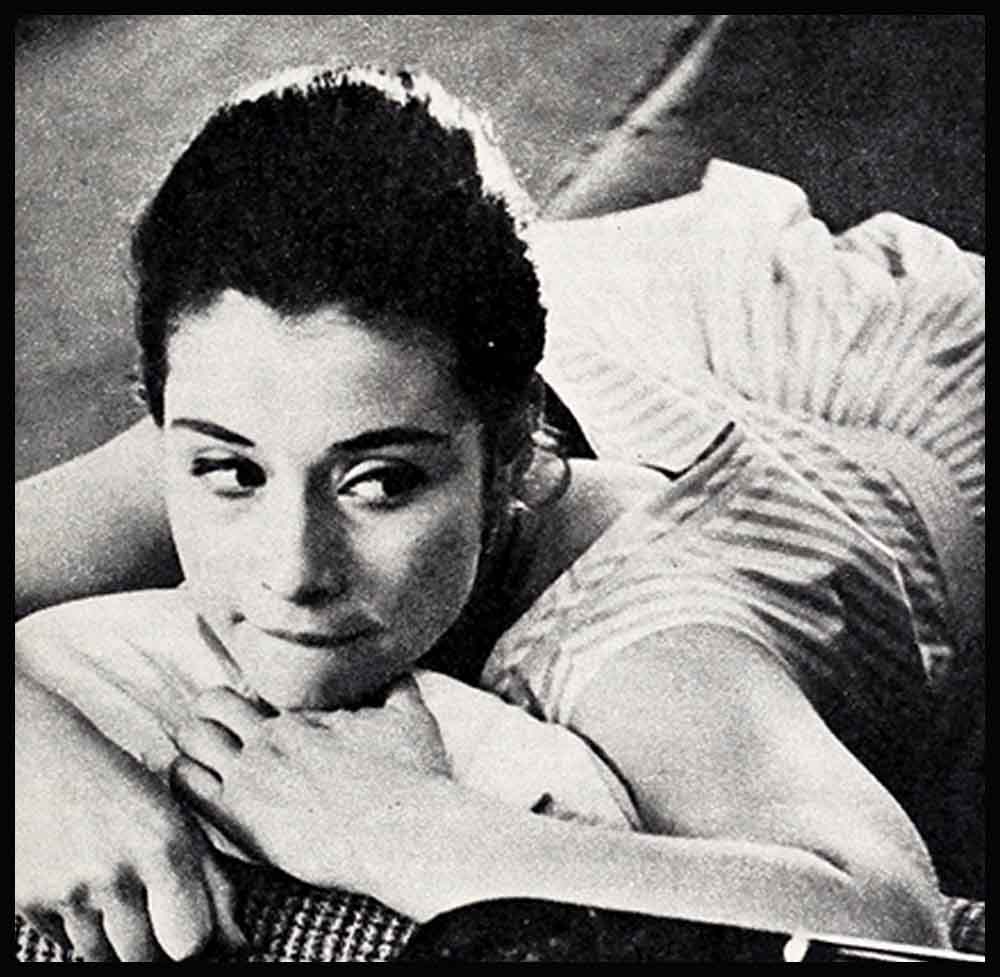 The Danger of Being an Actress

One day, as I dashed out of my little apartment—I live alone, as do many young actresses—I realized that I had forgotten my car keys. So I ran back upstairs to get them, only to discover I had left my apartment key inside the apartment! I was locked out. I ran next door to get my uncle, who was also my landlord, but he wasn’t there. Some men were working on construction nearby and there didn’t seem to be any other solution so I asked them, “Can you lend me your ladder, so I can climb into my apartment window on the second floor there?” But the men said no. They didn’t want to get involved in a possible accident; it involved insurance risks and they felt they couldn’t take the chance.

I was due at the studio, and I was nervous, and, wondering what to do next when a young man who had the ground-floor apartment drove up in his black T-bird. He was a thin fellow, with glasses, who had moved in while I had been in Greece on location. My uncle had told told me that this youth was an aspiring actor from New York. Although I had never exchanged a single word with him, this time I said, “Would you help me get into my apartment? I’m locked out.” Ordinarily, I would not talk to a stranger, even though he was a neighbor. İt was bad enough getting unwelcome phone calls (despite my unlisted number) and receiving notes in my mail box from strangers. I kept to myself in the neighborhood. The fellow said, “All right,” and ran out and somehow dug up a ladder. When he got to my window, he called out, “It’s locked and you’ll have to find me a screwdriver so I can force it open.” He threw me his key and said, “Go into my apartment and get a screwdriver. There’s one on the kitchen table.” I got the screwdriver, and threw it up to him. He pried the window open, climbed in, and opened the door from the inside. I was so relieved, I thanked him and said, “If I can ever help you, l’ll be happy to.” Then I had to dash away to get to work.

“Well,” I said to myself, “he seems a nice fellow.” The fact is that I don’t make friends easily; l’m rather shy. Also, l’m cautious. After all, I live alone. And all girls who live alone have their bad moments when a friend becomes too amorous or a stranger becomes menacing. But with a young actress, it’s worse. Her face is familiar and her personal life is well known through the gossip columns, and that attracts all sorts of neurotics. She receives bawdy, vitriolic and sometimes obscene letters and phone calls. She becomes alert to danger.

Three days later, my boy friend, Tom Allen, was visiting me for the evening. Tom is a struggling young actor, and very understanding. As it happened, we were discussing the problems of Hollywood’s young actresses. Suddenly, there was a knock on the door. It was the youth from the apartment below, seeming very tense as he said, “I want to talk to you for ten minutes.” But I had to tell him, “No, l’m sorry. I have a guest here, and I cannot leave my guest.” He became angry and snapped, “Okay, if that’s the way you want it!” He stared at me with open hostility and I looked at him astonished. His eyes were burning and there was a strangeness in him. When I tried to explain that I just couldn’t see him that moment, he ran off in anger. Five days later, I was driving my car into our driveway just as he was coming out in his car. I tried to be civil and waved, “Hi!” But he gave me an icy stare, and drove right by without pausing. I shrugged my shoulders and wondered,

I was too busy learning my lines for a TV show to give it much more thought. Then one night I came home tired, about 8:30, loaded with papers and groceries. He drove right in after me—I had a feeling he had been parked nearby, waiting for me—and he watched me step out of my car. I tried to be cordial and said, “Hi!” He said, “I want to talk to you right now!” I hesitated, and he said, “I want to talk to you for ten minutes—if you can spare ten minutes of your life!” I wondered if I was doing the right thing, but I replied, “Well, ten minutes.” He protested, “We cannot talk out here in the driveway; it’s embarassing. Let’s talk in your apartment.” But I didn’t want him in my apartment, so I said, “All right, we’ll talk in yours.” We got out of our cars and he walked into his apartment while I stood in the doorway. Something told me I shouldn’t go in.

“Afraid of coming?” he taunted me. “Afraid l’m going to rape you?” I tried not to show alarm. “İf you want to tell me something,” I insisted, “tell me. Do you have something to say?” He snapped, “Yes, I have something to say.” I snapped back, “Good! Then say it!” He became angry and yelled, “İf you are in such a rush, then go!” By now, I was so annoyed, I forgot to be frightened. “Well, then, say it,” I said impatiently. “Stop acting like a child! Only children act this way.” He eyed me with suspicion. “I know the whole story,” he suddenly exclaimed. “I know why you want to come in and look around!” I glanced around the room to see what he meant. I saw piles of theatrical trade papers and religious articles on the table. Also, I saw girlie photos cut out from men’s magazines and pinned on the p wall, with moustaches and other distortions pencilled on.

I had the uncomfortable feeling I was 74 in the presence of a very disturbed person. perhaps a deranged person. I didn’t like the pencilled obscenities on the photographs.

Now he was looking at me piercingly and said, “Okay . . . You really wanted to know about me! It was a pretense! You are trying to find out about me! You knew I was not easy to attract!”

Now I was sure I was faced with danger. I could feel my heart pounding wildly. I knew that he was building up to an emotional explosion, and I tried to put on an act of calmness.

“I don’t know you,” I assured him, quietly. “You mean nothing to me. I haven’t been trying to attract you. I don’t know what you want from me.”

I knew I was trembling and I was worried that he might notice it and overpower me.

He started to shout at me. “When you went to my apartment to get the screwdriver so I could jimmy open your window . . . Well, you did that so you could snoop around!”

“Please!” I protested. “I’m not interested in what’s in your apartment, not at all.”

I knew without doubt now that he was sick, very sick! I knew I should get out. And fast.

Then he sprang toward me, shouting, ”Don’t leave!”

Although I was terrified, I said firmly. “I am going to get out of here.”

I was terrified. but I put on an Academy-winning performance of nonchalance.

Suddenly, he shouted, “All right! You can leave!”

“I certainly will leave!” I snapped.

“Something’s wrong with you!” I blurted out, forgetting it would have been wiser to run away quickly.

“This is not the end! I’m going to see you in court!” he flung at me, as I ran out of the building and into my uncle’s house next door. I was hysterical. I threw the papers and groceries down, and sobbed out the story about the mad boy.

My uncle listened quietly, and said, “I was afraid something was wrong with that boy when I rented him that apartment . . . Come, calm down . . . I’ll go next door and talk to the boy.”

By the time my uncle went out, the boy had jumped into his car and was off.

My uncle then told me that he under- stood the boy had had a bad experience trying to get a job in a play. He had been rejected at the same time his girl friend had been chosen for a part. Apparently, he had become angry at all girls.

I suspected that the boy was torn between wanting my advice about his career and his hatred of all girls.

I went back to my apartment and locked myself in. Then I brooded. Should I call the police? But I was afraid the police would probably be unable to charge him with assault since he didn’t actually touch me. Besides, I felt this type of police-case publicity would not do my career any good.

I decided, instead, to call my boy friend. Tom went to his boss immediately and told him an emergency had arisen and he had to leave. Then he raced over to my apartment, an hour’s drive.

After a while, my uncle phoned to say the boy had returned and was hysterical. “He says he didn’t want to harm you, and that it’s your fault for trying to get rid of him when he was aching to talk to you.’’

My uncle said he’d come over with the boy and we’d talk it over.

When he arrived, I opened the door an inch, but kept the chain on. I was afraid to let the boy in, even with my uncle there. But as we were talking, Tom arrived.

With Tom present. I had enough courage to open the door and let all three come in.

At once, Tom wanted to hit the boy; but I intervened, “Don’t hit him! I’m sure he didn’t mean to harm me!”

Then I tried to get everybody to calm down. I offered the boy a cigarette and tried to make him feel we were his friends. I managed to get him talking about his career, and he confessed that he had been panicky about getting jobs. “I had been warned it was tough getting jobs in this town,” he confessed. “But it’s really terribly difficult. I don’t know where to turn!”

He admitted he had been very depressed, that his head was hurting, that he felt exhausted. We sympathized with him, and urged him to return to New York where he had parents. After about a half hour, he was calm enough to leave.

I was glad I hadn’t phoned the police. I knew it was not a police problem; it was an emotional problem. And I wanted to help him resolve his problem rather than to punish him.

The next morning, my uncle told me that the boy had moved out during the night. A week later, a phone call came from New Mexico from the boy; but I refused to accept it. I was so afraid that he might misinterpret my sympathy.

Hollywood is filled with such youths. And when they blow their top and select a girl on whom to vent their monumental anger . . . it can be very dangerous!

They represent only one of the many dangers that face the girl who lives alone.

Diane’s next film will be “Nine Hours to Rama,” for Paramount, soon to be released. 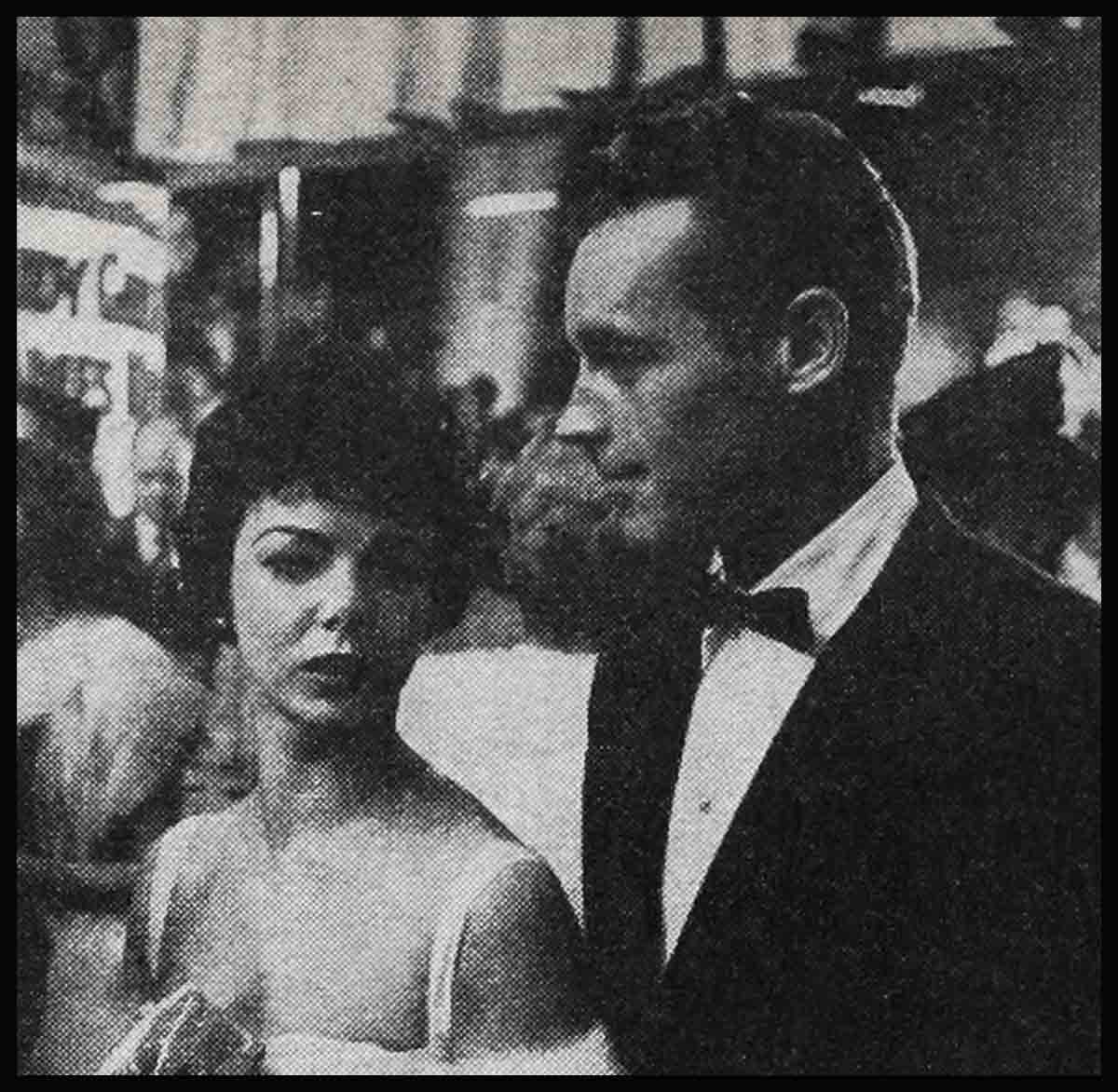