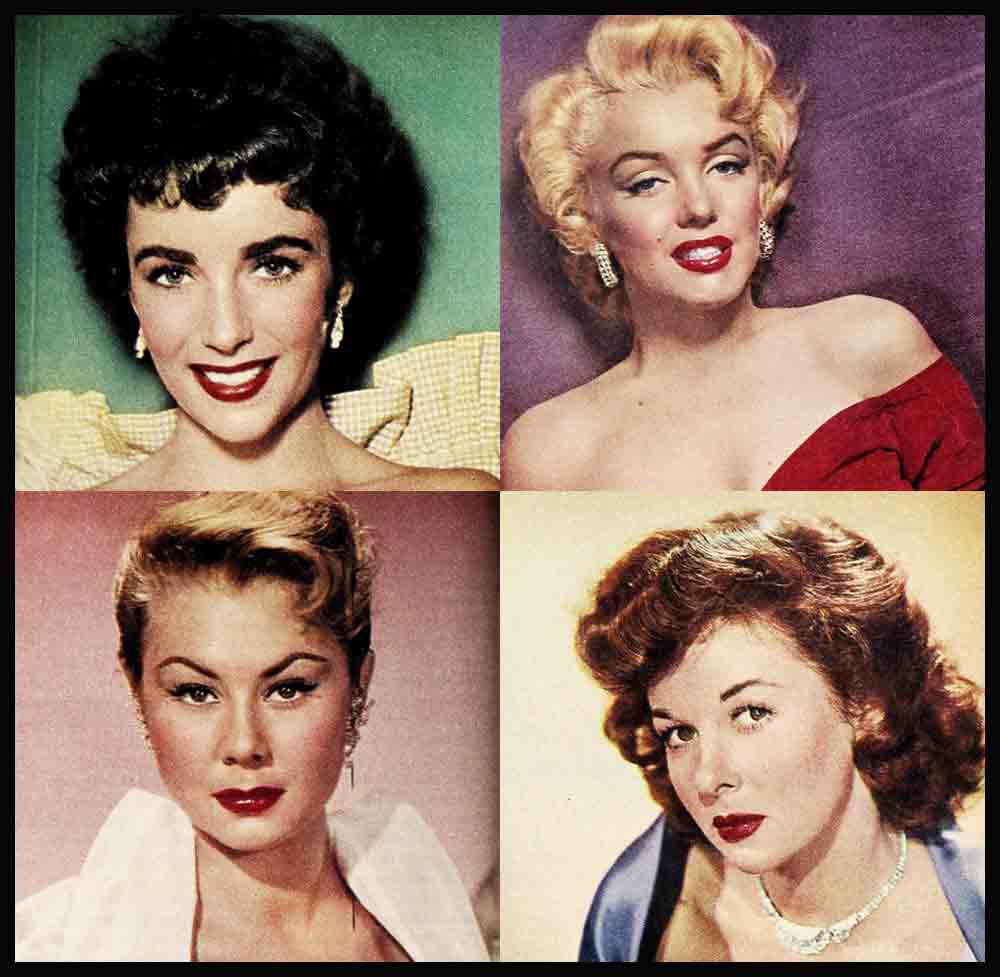 Is Hollywood Carrying Sex Too Far?

Pronounce sex backwards and you come up with excess. And that’s exactly the state of affairs in Hollywood, which is going all out in a hysterical effort to sensationalize—only here we call it glamourize—the female of the film species. It’s a wild-eyed pageant of sex on celluloid and off—the like of which hasn’t been seen since the decline and fail of the early motion picture empire.

A blonde bundle, sixty-five and one-half inches high, soft and cuddly all ’round—and I don’t have to tell you her first name is Marilyn—is the spearhead of this new type of Monroe Doctrine. open your mouth, remove the underwear, pose in the nude, show your legs, show your bosom, split your skirts, V to the waistline, front as well as back, and never mention anything quietly domestic—this is the snowballing formula for success in Hollywood, which now believes nothing succeeds like sucsex.

There is only One top movie star in Hollywood who refuses to be stampeded by Mile. Monroe—Betty Grable, the Queen of Curves at Twentieth Century-Fox, before the throne was kicked out from under her glammer gams by the bold, brash newcomer. When needled with “How about that Marilyn taking over the studio?” Betty replied nonchalantly, “More power to her. There’s always plenty of room at the top.” Brave words. But I’m told Betty burned a bit when the MMmmmm girl stepped into her dancing shoes for “Gentlemen Prefer Blondes.”

And Olivia de Havilland says, “There’s a big difference between vulgar and voluptuous, and some of these girls don’t seem to realize the difference.” But Livvy must be mentally amending those words a little, because her agents are looking for “something feminine and glamorous.”

Of course, nudity and the flaunting of the female form divine is nothing new. Eve started it, and down through the centuries, the fair sex, from the Duchess of Alba to Mata Hari, has used its undraped assets for propaganda, power or passion. But the Duke of Alba, unlike Tyrone Power, didn’t take to the strip act, and threatened to paint portraitist Goya in his own blood. Ty’s reaction to the furore following the published photos of wife Linda’s undraped marble form, was a proud smile of possession, plus a place of honor for the sexy statue in his garden by the swimming pool. Their guests have a look—then cool off in the water.

But to get back to the theme that Nature by any other name spells Monroe: The sudden rise of the luscious beauty was no accident. She was under contract three years ago to Columbia, labeled an all-American girl—the kind who lives next door—and she got exactly nowhere. Because this beauty has brains, she sat down on her delectable derriere and figgered out why—and she came up with a sex campaign as deliberate as D-Day.

Jane Wyman tossed out drammer and Mother Hubbards, split her skirts and wore leotards in “Just For You.” And now you’ll find her at most benefits in long opera hose and abbreviated panties.

Mitzi Gaynor, an ingenue if ever I saw one, performed an almost indecent dance on the stage here in “Jollyanna,” doing blush-making things with a tassel. And her studio, which was on the verge of not picking up her option, did a figurative double-take, and picked her up, tassel ’n’ all.

Corinne Calvet, a shrewd French gal, directed world-wide attention to her mammary assets with a million dollar law suit against Zsa Zsa Gabor, whom she claimed said she didn’t have enough to hang a bra on. When Corinne made “What Price Glory,” she even dared to tangle with director John Ford, who wanted her blouse over her shoulders. But as fast as John pulled it up, Corinne wriggled it down.

When dyeing her brown hair blonde didn’t land Anne Baxter in “Gents Prefer . . .” she agreed to keep her hair yellow for “My Wife’s Best Friend,” and, to clinch her new sexiness, Anne The Dignified did a belly dance in one sequence.

Terry Moore was nothing at Columbia, even in a picture with Glenn Ford, until a hep male friend told her that the best way to avoid being a bust was to show it. Now little Terry is bustin’ out all over.

Vanessa Brown, former quiz kid, believes her brains are a terrible handicap on the road to stardom. “I was caught like a rat in the trap of my I. Q.” So about six months ago, Vanessa performed a mythical operation, and made over her outlook almost as completely as any schnoz remodeled by her plastic surgeon husband, Doctor Robert Franklyn.

But I suspected a little trickery was afoot when Vanessa’s high powered press agent called to say that she was posing completely nude for a camera magazine. It turned out that her husband was taking the photo. He posed her with her back to his camera, and his finder stopped at the second last vertebra in her spine. Vanessa wasn’t a quiz kid for nothing.

I was forcibly reminded of the new Sex Deal at a party around Jimmy McHugh’s pool, when I complimented Jeanne Crain on her trim figure and lovely face. (After the birth of the last baby she’d been letting herself go). “Got to be chic,” she flipped, “we have a Monroe at the studio.”

And Jeanne, who thinks she’s as smart a girl as the next, sat down to do some calculating on the why of Marilyn’s zoom boom. And she came up with the fact—and I don’t know how smart this is— that Marilyn is minus children and has never had a home-shot layout in the magazines. So now it’s taboo to talk to Jeanne about her charming kids or to take pictures of her with them. And I think that’s a pity, because there was something madonna-like about Jeanne with her brood. And what’s sauce for Monroe could make a goose out of Crain.

Esther Williams is another femme star to put her kids out to pasture in the name of sweet publicity. Her popularity isn’t as high as it was a year ago, and she sincerely believes—or maybe her studio does—that she has overdone the open-air-girl routine, which comes naturally. Esther is now calculatingly going in for glamour.

Joan Crawford used to have a ball with her quartette of kids for the press, and with homey domestic shots. But Joan has a keen nose for a trend. And since she practically invented glamour for the screen, she’ll be in there pitching till the Angel. Gabriel blows his horn over Hollywood.

When Lamas let Lana down with a verbal thump that shook our insular world, she didn’t cry—not in public anyway. Like most people in business, she took inventory, noted her charms, and decided the lily could be gilded. She’s growing her hair longer and she’s very blonde again. If that’s what the public wants—for Lana the public is men—that’s what they’ll get.

Janet Leigh, who was showing what little girls are made of from the waist up long before Marilyn beat her to the inch, is now attacking the area from the toes up. As Mrs. Houdini, she wears tights and a spangled leotard most of the way. And as Mrs. Tony Curtis, her street dresses are split to the knee and molded to the body. Liz Taylor has taken to the “show-as-much-as-you-dare” routine, too.

They’re exposing June Allyson in a pantie-bra during her current “Remains to Be Seen” film—with heavy make-up, black transparent negligees, and nail polish for the first time in her up-’til-now girlish life. But it remains to be seen whether June rhymes with glamour.

Susan Hayward revealed a lot of charm in “David and Bathsheba”—and is nearly as revealing in the clothes she’s wearing off screen these “undressed” days.

Remember the sexy dance by Cyd Charisse in “Singin’ in the Rain”? Wait till you see her little number on top of a mountain during a Technicolor thunderstorm in “Sombrero.” Excited Metro praise agents describe it as the hottest dance ever seen on celluloid.

And they’re dusting off the sexiest oldies at Metro—and we mean pictures as well as people, for remakes—like Harlow’s “Red Dust” with Gable, for Gable and Ava Gardner. Ava, like Jean, will take a bath in a rain barrel.

Why are they making so many Biblical stories in Hollywood? Because they’re chockful of passion as well as preaching.

Prim misses like Diana Lynn are not only giving their all, they’re showing their all, for Life, Look and what have you. And Elaine Stewart, who makes her own clothes, is using less material these days!

Hollywood had become too serious, say the popular-opinion pulse holders. So let’s jazz it up a bit and give the customers what we think they crave.

But I can’t believe they really crave the sight of nineteen-year-old Debra Paget, running around the Twentieth Century-Fox lot at nine in the morning in a low cut evening gown and no shoes . . . Or Nancy Olson, scaring the natives by swimming nude in Honolulu. And Jean. Peters, re her “Blaze of Glory” role—“Holding my lips half parted to produce that sexy look. It cramps my facial muscles. And hip swinging makes my sacroiliac ache.”

Jennifer Jones, a million miles away from Bernadette in her latest movie of passion, “Ruby Gentry,” broke her arm swinging at Charlton Heston and left teeth marks on his nose during a wild love scene.

The moral letting down in pictures is reflected in the private lives of the stars, or vice versa. Much of what’s going on is reminiscent of the Fatty Arbuckle era which blackened the name of Hollywood.

Look at the billboards! They scream of Hollywood’s new attitude and latitude. Bustlines get bigger and more revealing, while the level of good taste goes lower and lower. And I’m wondering how it will end. Because there is little more than a metaphorical G-string between the possible and the impossible. Won’t take too much to snap.

Then what happens? We’ve been handicapped enough by a forced puerile approach to the realistic facts of life because of too much licentiousness in pictures before. Can’t we be adult, and amorous without being salacious? We don’t want blue noses meddling again. But we don’t want red faces either.

Let’s not go under trying to go overboard.