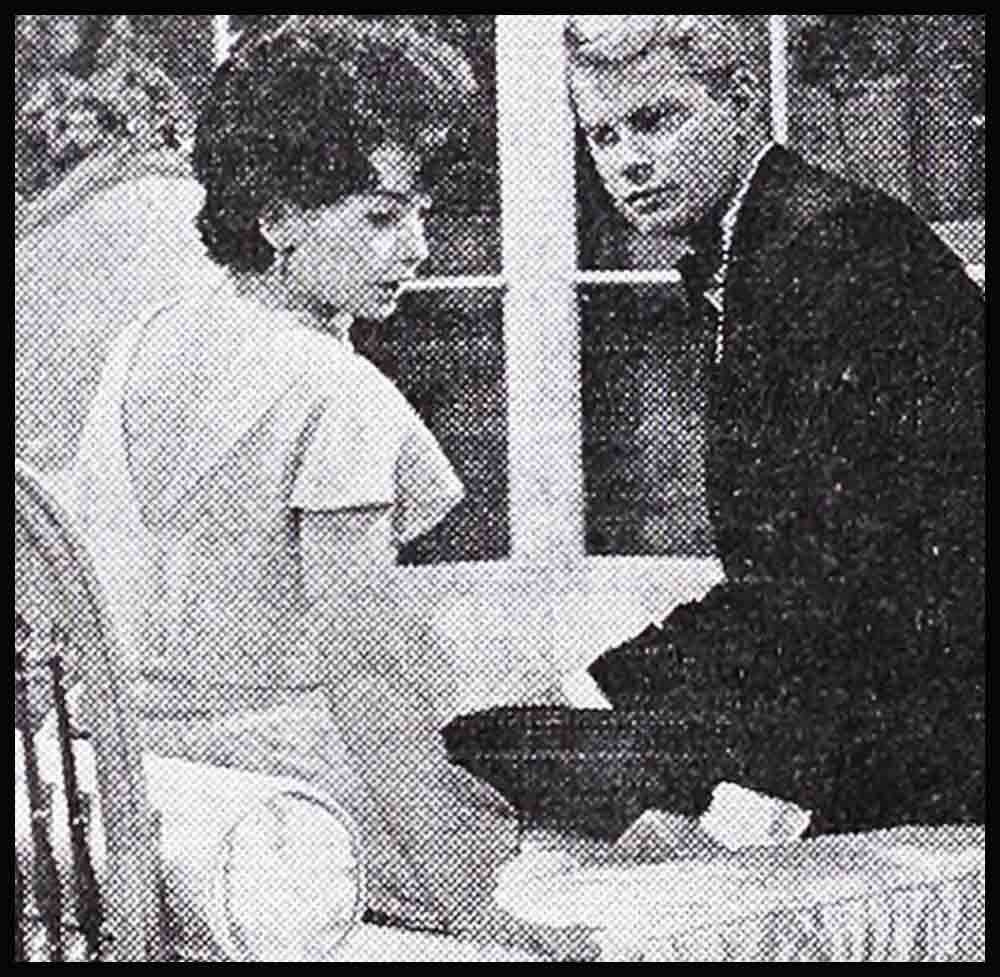 WHAT’S IT ABOUT? A teacher’s loving battle to reach the imprisoned spirit of a deaf and blind child—Helen Keller.

WHAT’S THE VERDICT? Simple, powerful, unsentimental, this version of the stage bit is a real movie. Though Anne and Patty are playing special people, the story tells us a general truth that fits any family: Parents (Inga Swenson and Victor Jory in this case) who spoil a child are, in truth, being brutally selfish without knowing it.

WHAT’S IT ABOUT? Farm boy and girl go for show-biz girl and boy, to the music of Rodgers and Hammerstein.

WHAT’S THE VERDICT? It’s big and bright-colored as a prize-winning fruit (grown more for display than for firmness and flavor). New and old songs, young and veteran stars (like Alice Faye) are all highly attractive. For a romantic surprise, Pamela and Bobby play it proper, while Ann-Margret and Pat Boone . . . why, Pat!

HELL IS FOR HEROES

WHAT’S IT ABOUT? All too human GI’s show their mettle when German forces have them pinned down in a tough spot.

WHAT’S THE VERDICT? This blunt account of World War II action has a look of reality, borne out by matter-of-fact performances. Even comedian Bob Newhart fits in, as an unmilitary soldier who’s useful in the highlight sequence, when an isolated squad tries to pretend that it’s a whole company, too strong to tackle.

WHAT’S IT ABOUT? Looking for romantic freedom in Italy, an American girl discovers she can’t live up to her talk.

WHAT’S THE VERDICT? Maybe we needn’t save our money to visit Italy—the real thing couldn’t possibly look as lovely as this travelogue-with-trimmings. The plot won’t take anybody’s mind off the scenery, though Suzanne is a welcome newcomer, and a boy named Hampton Fancher scores in a Jim Hutton role, played “straight.”

WHAT’S IT ABOUT? Our hero fights a grim war on a Pacific isle (chasing a pretty nurse and a harmless Japanese).

WHAT’S THE VERDICT? As cheerful egghead and social misfit, Jim and Paula used to be more fun than the film’s stars. Now that they’re the stars, Jim’s not so bright, Paula’s wildly popular, and the team works hard to get chuckles out of a low-geared entry in this service-comedy race which is mildly amusing.

WHAT’S IT ABOUT? As present-day homesteaders, a happy-go-lucky family has government authorities baffled.

WHAT’S THE VERDICT? Most of the way, it’s a cheerful homespun comedy with easygoing songs and funny lines; so it can be forgiven for slowing to a near-standstill at the finish. Elvis, as a good natured backwoods kid, and Anne, as a smart tomboy, make a romantic team that suits the picture’s fresh approach.

WHAT’S IT ABOUT? Escorting a wrecked movie queen, a failure returns to his boss-ridden Southern town to seek love.

WHAT’S THE VERDICT? So Tennessee Williams is just an old romantic! Here are Paul and Shirley playing true love gone wrong (in the shape of two pretty stupid types), while Geraldine portrays fallen grandeur with superb dash. The closeups, however, show that she’s too young to he cast as a star who’s too old for closeups.

WHAT’S IT ABOUT? A lawyer can find no legal way to shield his wife and daughter from an ex-convict’s revenge plot.

WHAT’S THE VERDICT? The idea seems to he just to scare us, and Mitchum’s the actor to do it. Breathing utter evil (with no hint that his character’s sick in the head), he makes the nice folks look weak and unconvincing. But then the story as a whole isn’t realistic—though it goes into unnecessary and distasteful detail.

WHAT’S IT ABOUT? Emotional disaster looms when a gentle European joins a rich, unhappy American household.

WHAT’S THE VERDICT? A strong cast (including Richard Beymer and new teenager Annette Gorman) builds some moments of interest in this adaptation of a well-regarded play. But the talk and three of the talkers get so irritating that interest wears thin along with the theme. Comes an urge to holler, “Oh, shut up!”

THROUGH A GLASS DARKLY

WHAT’S IT ABOUT? With husband, father and brother standing by, a young woman struggles to keep her failing sanity.

WHAT’S THE VERDICT? This straightforward modern drama about entirely believable people whose feelings we can share, is as sad as its grey seacoast settings. But director Bergman gives it an inner light and warmth with the same message as in “Wild Strawberries”—the difficulty and importance of loving.

WHAT’S IT ABOUT? At a luxury hotel, once a palace, a woman is haunted by a man who may he her past or future lover.

WHAT’S THE VERDICT? This puzzling, oddly fascinating film doesn’t make the least effort to tell a readily understandable story. It plays subtle tricks with time and draws no line of distinction between the real and the imagined. Scenes are repeated like themes in music; every shot is filled with beauty and with mystery.