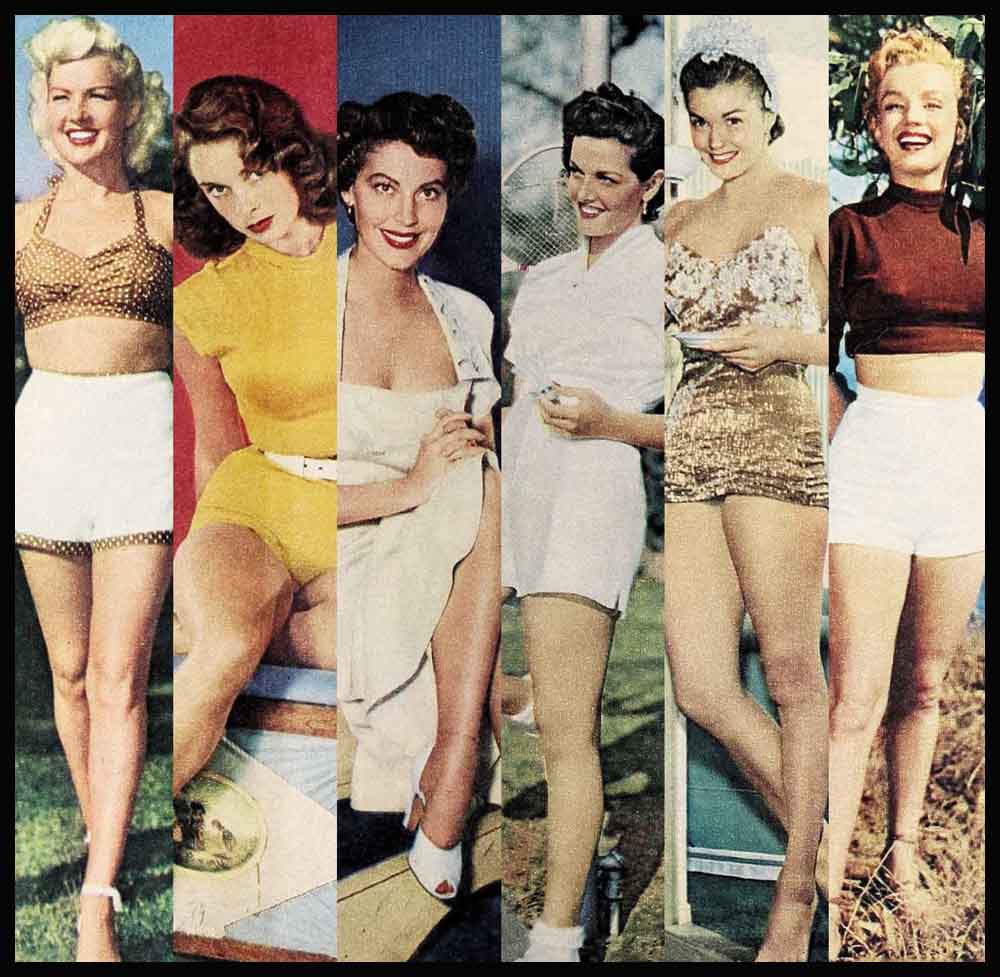 The Prettiest Legs In Hollywood

The Betty Grable legs, acclaimed in song, story and headlines, now win Photoplay’s poll conducted among Hollywood’s most eligible bachelors, plus some married men—just to give the whole thing balance. However, many of the married gentlemen preferred not to have their names or selections mentioned: wife-jealousy department. Hollywood’s beauty-wise male eyes are wolfishly aware of the new girls in town with beautiful gams, such utterly utter underpinnings as Marilyn Monroe’s or Mala Powers’s or Vera-Ellen’s.

All these dolls and Dietrich, who has not been forgotten, got a vote here and there. But the consensus went overwhelmingly to the pin-up pet of Twentieth.

As Richard Widmark said when I asked him for his first, second and third choice among the leg-lovelies, “Betty Grable comes first. For second, I choose Betty Grable and there can be only one possible girl for third. That’s Grable.” Then Dick pointed out the feminine beauty secret I doubt any woman would have thought of—and which I was to hear repeated by Scott Brady and Kirk Douglas and Farley Granger, even though they were talking of three other girls.

Said Dick Widmark, “Grable’s legs are wise legs that have learned how to be beautiful.” Said Kirk Douglas, choosing Joan Crawford’s as Hollywood’s most beautiful stems, “I pick them because they are the most consciously dramatic legs. You know, those legs that have worked for their expression.” Said Farley Granger, picking Janet Leigh, “It’s since she’s taken up ballet that Janet’s legs have caught my eye. They’re professional, you know.” Murmured Tony Curtis, “Janet is so beautiful, head to foot, but since she’s been studying ballet, why—” and then he went off into a bunch of statistics about thigh, calf and ankles.

Robert Mitchum picked Jane Russell’s long stems as his favorites. “I may, of course,” remarked Robert, who has the dramatic sense of always being different in his statements, “be the only man who ever got around to noticing her legs.” But he wasn’t. Jane came in fourth in our over-all count, Esther Williams fifth, and Marilyn Monroe sixth.

Bob was the only man, incidentally, who didn’t have Grable somewhere on his list. (He chose Jane Russell first, Janet Leigh second and Ava Gardner third.)

Macdonald Carey summed up the Grable gam glamour best. “Those legs are a legend,” he announced. “You might as well try to forget the Taj Mahal by moonlight, the Roman Colosseum by daylight, or Stardust at your first college prom.” He gave his second vote to Marie Wilson’s because “they smiled” and his third to Ruth Roman’s because “they make me think of days in the sun, playing tennis or swimming or fun things like that.”

Scott Brady didn’t choose “fun” legs. That quality of “work” came in again. Scott chose Moira Shearer first and Grable second, with Leigh third—and all for the same reason: These were legs that were beautiful because they know how to do more than wear nylons—and did it without any tense muscles showing.

That long-limbed look won, in Hollywood, even as it has won, now for years, in Atlantic City when Miss America gets chosen. One very-much-married star, who supposedly doesn’t know that any woman other than his wife exists, said, “Lately I have been increasingly conscious when that Leigh walks in anywhere, it’s murder.” Another married star reported, “I wish I were as young as Tony Curtis when Leigh comes breezing into a room. Then I wish I were younger, when Marilyn Monroe appears. It has taken me several meetings to realize that Marilyn has a face. But when Ava Gardner enters, I go home and fast. There is the beauty as far as I am concerned, legs, figure and face in that order.”

Probably it was because her face is so attention-arresting that Ava’s limbs get only third-place position. Bob Mitchum said that he felt it was almost impossible for any man to take his eyes away from her face long enough to be conscious of the rest of her. Yet it also had a lot to do with a quality that Kirk Douglas pointed out—the quality that is the reverse of what made Grable win. “Ava’s are showgirl legs,” Kirk announced. “They are just simply beautiful—and I’m not knocking that—but I still claim that legs that combine beauty and—well, technique, the technique of discipline, hard work, mastering one’s art—those are greater.”

You undoubtedly remember that not so long ago Howard Duff and Ava Gardner were a very real item. Now Ida Lupino is Howard’s favorite date but when it comes to picking Hollywood’s most beautiful gams, Ava still wins with bachelor, Duff. Dietrich comes second with him and then—OOPS—here she is again, Miss Grable.

Howard’s reasons for his choice? He won’t give. He grins and says, “It’s enough that I’ve given you these preferences, or how unwise can a bachelor be? Even this statement may ruin some enchanted evening for me in the future.”

If Photoplay had polled one mere woman, said dame would undoubtedly have pointed out that under this ruling Esther Williams would have rated very high and Jane Russell wouldn’t have come in fourth. Because, while Esther’s stems doing a flutter-kick obviously don’t work as hard as Grable’s doing a tap routine, they still do work and constantly. As for Jane, she goes in for a few sports but no dancing, no professional swimming. “It’s that length,” sighed one of the married males. “Those legs of Jane’s seem to go straight up to her armpits.” “They have glamour,” retorted another. “But not like Dietrich’s,” snapped back Farley Granger, the eternal romantic.

It was Farley, too, who came up with the likeliest expression of why Esther probably didn’t rate higher. “A fellow thinks of her all in one line,” he said, “and there is something so healthy about her that while the sight of her makes you happy. it doesn’t set you dreaming.”

Marilyn Monroe explained her own sixth place spot in this poll. “I’m thankful even to have got one foot in the Grable class,” she said in that small, perfumed voice of hers, “but confidentially, I’m starting ballet lessons almost at once. This poll just proves that a girl shouldn’t leave a limb unturned.”

So let all this be a lesson to you if you want more beautiful legs. Ballet lessons would be ideal. Swimming is enormously beneficial. And walking is a big, big, help. But specific exercises are even better.

Exercise 1. Place your telephone book on the floor, and in your bare feet, balance your toes on the edge of the book. Hold your arms out straight ahead of you. Without stepping off the phone book, lower your heels as far back as you can, then—again without stepping off, rise to tiptoe. This is a wonderful exercise for strengthening the calves of the legs, reducing or developing them as needed. (Don’t forget that exercise builds up or takes off equally and nature seems to know which needs to be done.) Do it slowly for development; faster for reducing.

Exercise 2. Slant your ironing board against a sturdy chair. Lie down and get someone to tie your legs to the board with a towel, or something firm but not binding wrapped around your ankles. Then with your heels higher than your head (and the ironing board fastened down, too, so that it can’t slip) pull yourself up to sitting position, then go back to the lying position, and with your hands holding tight on either side, give a good long stretch. This is great for the upper thigh muscles.

Exercise 3. The old familiar squat—but nothing surpasses it. Stretch arms before you for balance, rise to your fullest tiptoe height, then slowly go as deep to the floor as you can without bending knees.

Exercise 4. Another old familiar—bicycling. A real wheel is best but, if you haven’t one, lie on your back and pedal an imaginary one at least twenty-five times a day for each leg. Fast pedaling reduces, slow pedaling builds up.

Keep these up with enough persistence and it could be that you can say to your boy friend, “Grable? What’s she got that I haven’t got?” and all he’ll be able to reply will be, “Harry James.”

Farley Granger is in “Behave Yourself, Richard Widmark in “The Frogmen,” Macdonald Carey in “Meet Me After the Show,” and “The Cave,” Tony Curtis in “The Prince Who Was a Thief,” Bob Mitchum in “His Kind of Woman,” Howard Duff in “Fine Day,” Scott Brady in “Montana Belle,” and Kirk Douglas in “Ace in the Hole.”

Betty Grable is in “Meet Me After the Show,” Janet Leigh in “Two Tickets to Broadway,” Ava Gardner in “Show Boat,” Jane Russell in “His Kind of Woman,” Esther Williams in “Texas Carnival,” and Marilyn Monroe in “As Young as You Feel.”