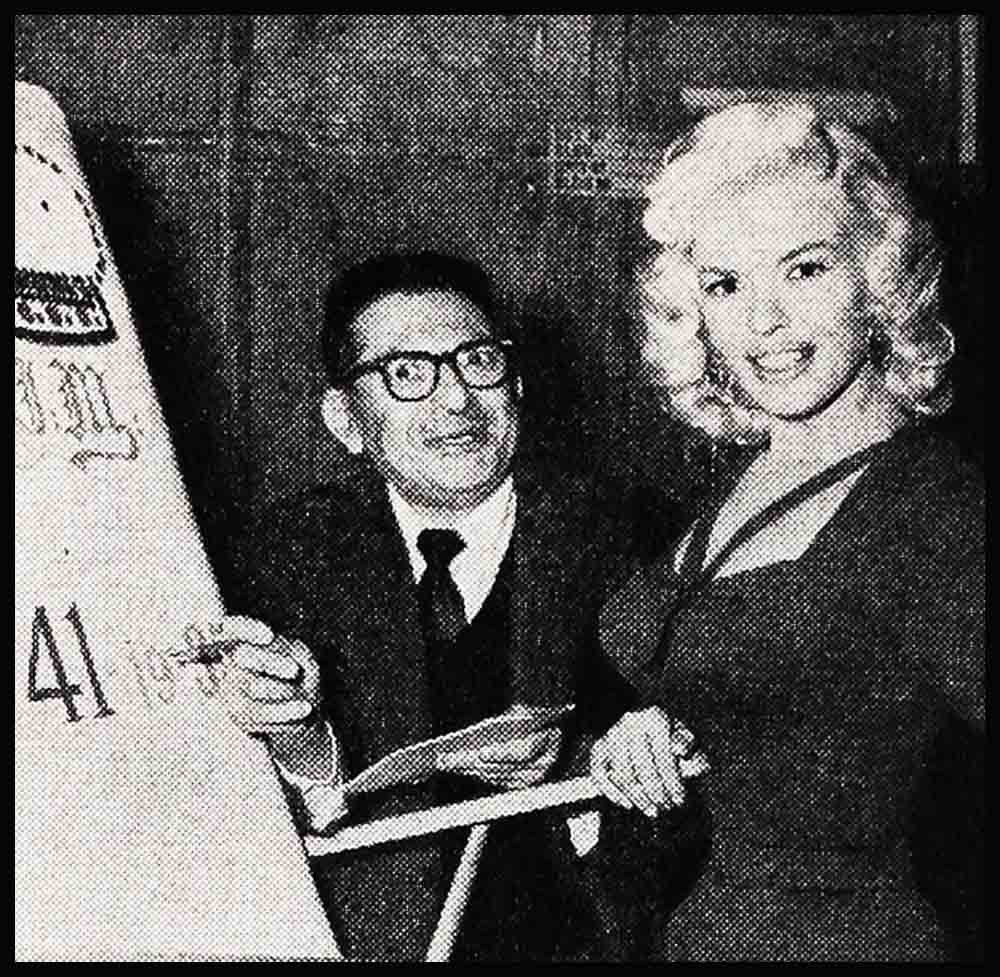 I’d say Jerry Lewis is out to prove he can be a success alone. Dean Martin isn’t. . . . Tab Hunter is taller and stronger than be first appears to be. . . . Cheesecake: The first performer to whom the label “cheesecake” was applied was Elvira Amazar, a Russian opera singer, when she arrived in this country back in 1915. . . . Elia Kazan finally got around to discovering a red-hot sex dish for the screen: Carroll Baker. . . . When I’m talking to Jayne Mansfield, she’s standing closer to me than I am to her. . . . Cary Grant was hypnotized (by wife Betsy Drake) to stop smoking. It worked so well that Cary not only gave up cigarettes but also liquor. . . . Frank Sinatra has good taste in wine, women and songs. . . . Admission tickets should be sold to visit Debra Paget at home. . . . Kathy Grant’s real name is Kathryn Grandstaff. And as I put typewriter keys to paper, it’s still a big question whether the name will ever be Kathy Crosby. . . . After seeing one of the longie movies which shall be titleless, Sheree North commented. “Enough is too much.”

Rod McKuen is an actor to watch. A word to the wise is supposed to be sufficient. . . . I wonder if the prize fighter Rory Calhoun is helping the popularity of the actor Rory Calhoun, or vice versa. . . . Cleo Moore said it: “If you want to learn more about men, become a blonde.”

I believe Bob Wagner would do better if his insecurity wasn’t showing. . .. You just know Kim Novak is in the place because she is a loud laugher. . . . I’m pleased Shirley MacLaine is in a big hit (“Around the World in 80 Days”). Now I’m waiting for a movie in which Shirley dances and exhibits her legs. . . . Anne Baxter is getting sexier. Well, to me anyway. . . . Beefcake: First actor to get the coined beefcake label was Tony Curtis. . . . Little-known fact: Tony Perkins wears contact lenses. Tony also carries a small recording machine with him to important conferences. . . . Regardless of whether they dub in her voice or her singing, they don’t have to dub in Anita Ekberg. She’s for real. . . . By the way, Audrey Hepburn fell in love with Mel Ferrer when she saw him in “Lili.” Never underestimate the importance of a good movie. . . . Hollywood is an over-populated village trying to act like a city. . . . Barbara Nichols’ definition of a genuine movie star: “One who’s still one when they show his movies on TV.”

Doris Day is representative of the All American girl, and I wish all All-American girls could be as wealthy. . . . With very few exceptions, night clubs are a relic of the past. . . . My favorite view of Hollywood, despite fog and smog, is from Sunset Boulevard at night: the town is spread out and appears to be miles and miles of vari-colored electric lights, and they don’t spell out anything. . . . Natalie Wood admits she falls in love too easily. “It’s not really love, I guess,” explains Natalie. “I guess it’s fascination. It’s also fun.” . . . Liz Taylor telling Mike Todd about a certain actress: “She had more money than she could afford.”

I don’t care what anyone says, Tony Curtis is improving as an actor and as a person. . . . I wonder if Gary Cooper has kept count of the number of actors who have been called “another Gary Cooper.” . . . Rod Steiger is very popular in London, and I don’t mean just with Diana Dors. . . . After a preview, Mike Curtiz was asked: “Is it possible for this movie to be a hit?” Mike replied: “Nothing is impossible if it’s possible.” That’s Hollywood for You.