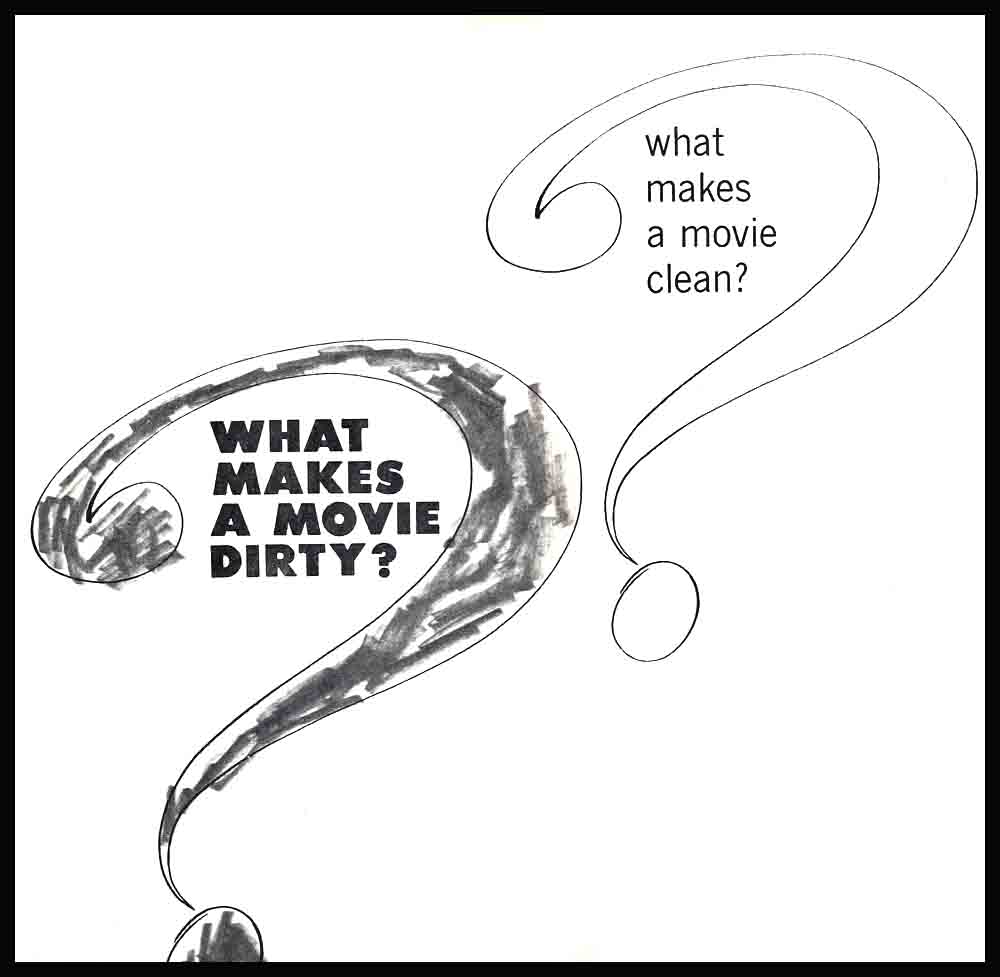 What Makes A Movie Clean And Dirty?

After viewing enough samples from today’s crop of motion pictures, one can almost dream up an imaginary mother-daughter conversation going on all over these United States.

“Mother, oh Mother, what makes a three-letter word like sex turn into a four-letter word? I mean—into something that’s not very nice . . .”

“Why that’s obvious, my darling daughter. The manner in which sex is treated can turn a pure and natural thing into a four-letter word.”

“Mother—do you mean Hollywood? Do you mean the movies?”

“Oh. But Mother, what makes a motion picture dirty?”

“Oh. But Mother, those themes have been the backbone of great literature down through the ages.”

“Exactly, my darling daughter. But as I said, it’s the manner in which such themes are treated that makes for the end result. Sex is only shameful when the treatment degrades it—just as the human body can become shameful if we bathe it under a sheet, implying it’s too obscene to be seen.”

“But Mother, what seems obscene to one, may not to another.”

“That, my darling daughter, has made censorship a bone of bitter contention for many, many long years.”

“But not for box-office appeal, my darling daughter. Not to sell tickets and fill seats in a movie theater.”

Yes, the old, old controversy still rages today, and the questions are unchanged: Who, if anyone, shall say what is to be shown on the screen before an audience? By what standards are censorship boards chosen to sit in judgment on what makes a movie wholesome, tasteful, artistic; or sly, dirty, obscene? What equips judges—ranging from churchmen and Legion of Decency members to average, every-day citizens—with the ability to decide what is morality or immorality, culture or savagery, good taste or bad? “Lady Chatterley’s Lover,” once banned as indecent, has now been moved over into respectability, while “A Roll in the Hay” remains under the censorial axe. Who is to decide these things? Who is to decide whether Henry Miller’s “Tropic of Cancer,” which recently passed from twenty-five years of exile into acceptance, is a masterpiece of literature or a cesspool of “reelistic” filth?

To any of these questions there can be no single answer. Standards change from person to person, from situation to situation. A hairline separates beauty from indecency. A woman’s shapely body, photographed in the nude, can be beautiful. But put a pair of slippers on her feet—only slippers, nothing more—and the picture may take on a strange obscenity. By the same token, Tennessee Williams’ writing might shock you, while exciting my admiration for his artistry.

Besides, standards of morality flex and bend with the times. The Victorian code of social behavior is as different from the Twentieth Century’s code as long underwear is from bikinis. “Pregnant” used to be a hush-hush word. Today a woman can be seen having a baby on the screen in “The Case of Dr. Laurent.” Approval of the film was a long time coming, but the miracle of childbirth finally emerged from the shameful. Censorship works both ways, its wonders to perform.

Time’s pendulum swings both ways, too. There was an era when Hollywood decreed that every movie must have a happy ending or the customers would go away dissatisfied. Romance was sentimental to the point of stickiness. Now the pendulum has swung to the other extreme. Swung? Let’s say, rather, that it was given an enormous, massive push by the exponents of the socalled “new realism.”

Now realism—an honest portrayal of life—is one thing. But fake realism—exploiting shock for shock’s sake, sin for sin’s sake, dirt for dirt’s sake—is something else again. In their eagerness to get away from the old saccharine Pollyann-ish view of life—all sweetness and roses—many movie-makers have gone altogether too far in the opposite direction. They’ve come up with an image of American life in which racketeers, gangsters, prostitutes and pimps are everybody’s next door neighbors. Instead of being shown as the vicious or misguided exceptions, they are offered up as the “norm” of our population—and putrid language is tossed off as everyday grassroots American colloquialism. What must the rest of the world think of us?

Nor is our image abroad purified and sweetened by such foreign films as “La Dolce Vita.” In that Italian award winner, a handful of leisured Americans live it up in the lowest of dissolute Roman high life. Ordinary tourists would hardly recognize their fellow Americans in these characters, but it isn’t the tourist type that gets into foreign films, it’s the sex-debaucher. Yet, evidently pressured by today’s violent trend toward “adultness,” our own decent National Legion of Decency has seen fit to give this picture its approval—though with a reservation that it be “restricted to mature adults.” The pendulum swings far.

History shows us that revolutions ultimately work their way back to middle ground. Perhaps the film industry will do just that—hit a happy medium between Victorianism on the one side and obscenity on the other. On middle ground there is plenty of room for sophistication and morality both. And certainly a compromise is preferable to any threat of rampant censorship. The very word “censorship” does not seem to fit the American mouth. It is doubtful if the Greeks had a word for it. The Russians certainly have.

Meanwhile, protests against the low-low level of movies continue to mount, organizations and committees are formed—yet it remains a nasty sex o’clock. Certain Hollywood producers pull out all the stops and let go with devious tricks for evading their own Production Code which guarantees the purity of the product. . . . Adult audiences upset the applecart by staying away from the worthwhile pictures and standing in line for the bawdy ones. . . . The film makers wail, “If we don’t give them what they want, the foreign pictures will put us out of business.” . . . To placate the moralists, producers nod their heads to a new proposal that the more questionable pictures be labeled, “For Adults Only” . . . and the whole device seemed admirably calculated to whet the curiosity—and probably the appetite—of the very youngsters to be protected. And these films aren’t for children!

We get what we ask for

But if the adults are equally titillated by the lurid promises implicit in such a label—which is more than likely—let them have it. They deserve what they get. If enough of them asked—demanded—stayed away until they got pictures of stature— they’d get them! The dictum of the people is the most potent censorship of all— because it is the most profitable.

This is not to protest that Hollywood does not produce films of artistry and stature, or that all such are box office flops. Heaven forbid! But too many family stories like “It Happened to Jane,” “The Last Hurrah,” “Old Man of the Sea” and “The Diary of Anne Frank” lose money, while the wages of sin, sadism, violence, drug addiction, rape, incest, homosexuality and prostitution add up to profit.

So in a little prairie town surrounded by an ocean of nothing else, the sole motion picture house will flash across its marquee, “Naked in the Night.” And in a town the size of St. Louis, Missouri, the offerings will range from “Teacher is a Sexpot” to “Dark at the Top of the Stairs.” Because in general, sex pictures pay off for what higher grade films stand to lose. And the industry knows that altruism and big business do not mix.

Obviously, the responsibility for good-or-evil influence on the young cannot be loaded onto the shoulders of a commercial enterprise like the film industry. On whose, then? The answer, of course, is: home, school and church. These are the well-intentioned of the world, whose task is to sow the seeds of high morals, decent standards and good taste. And of the trio, it is the home that should, of necessity, be the determining factor.

It would be extreme to charge that crime and sex films tend to create a nation of killers and rapists. There is insufficient evidence to prove it. But what is certain is that a diet of dirty movies cannot nourish or enrich a growing, young mind.

It is also true that only one percent of American youngsters are juvenile delinquents. The other ninety-nine, for all their exposure to “prurience,” have the intestinal fortitude to come out first-rate citizens. Whatever the rest of the world has been led to think, our national gesture is not to the hip!

No, today’s boys and girls are keen, almost frighteningly well-informed. They are exciting backbone-of-the-nation material. But how sad that any percentage of them should have to fight the pull of confused standards, insufficient parental supervision, an educational system in dire need of re-evaluation.

A first-class youth is a proud boast that we can still make! But our youth deserves better care-and-feeding of the mind and soul. They deserve protection against any conscienceless movie producer who, for the sake of a fast buck. would bog down the level of our national culture.

60's, A Roll in the Hay, Baby Doll, Come September, Dark at the Top of the Stairs, Dusty magazine, For Adults Only, For Mature Adults Only, Henry Miller, It Happened to Jane, La Dolce Vita, Lady Chatterley’s Lover, Les Liaisons Dangereuses, Magazine, Naked in the Night, National Legion of Decency, News, Old Magazine, Old Man of the Sea, Old News, Paparazzi, Parrish, Periodyssey, Pregnant, Retro, Retro News, Saturday Night and Sunday Morning, Teacher is a Sexpot, Tennessee Williams, The Best of Everything, The Case of Dr. Laurent, The Diary of Anne Frank, The Last Hurrah, The Mark, The Moon is Blue, Tropic of Cancer, Twentieth Century, Vintage, Vintage Paparazzi, What Makes A Movie Clean And Dirty