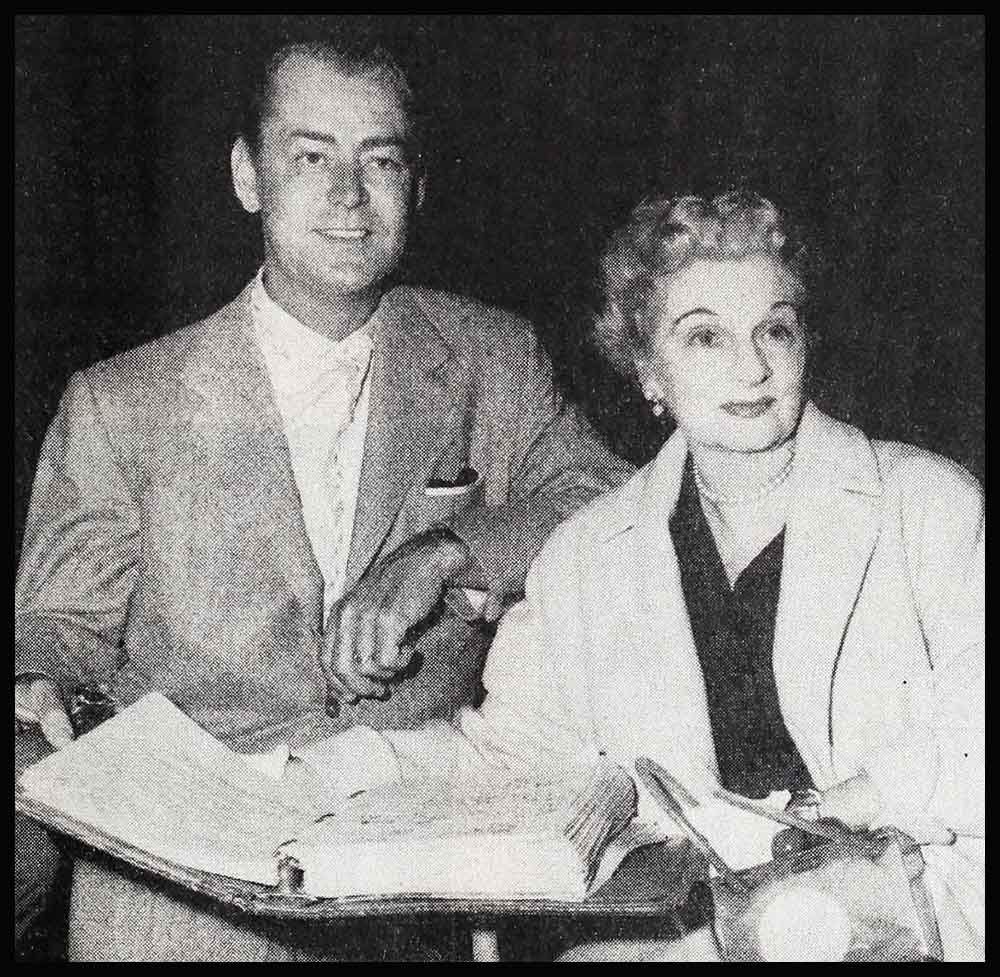 This month in Hollywood: Hair shades are growing darker, with brassy blondes on the wane. And skirts shorter, shorter, shorter . . . Even the strictest dieters now agree one avocado a week keeps the skin lubricated from within, and never mind the calories . . . Fashion note for Hollywood cowboys: Dale Robertson, of TV’s “Wells Fargo,” has his out-west hats made to order in Rome. When they get ’round to Sack Chaps by Dior, I’m headin’ for the last roundup, pardner! . . . The girls have gone splashy print mad—the bigger and louder the print frock the better . . . The painting craze has returned with a venegeance—portraits, still life and sheer madness, with Dusty Anderson (wife of director Jean Negulesco) and Claudette Colbert the best of the amateurs . . . They’re discussing Lana Turner’s built-in heartache and her wisdom in consulting psychiatric specialists . . . They’re drooling over the records with music taken directly from the tape of a star’s various movies. The first out—Dot’s “Bernstein: Background for Brando”; the second, “Background for Brynner” . . . They’re having a fit over Gary Cooper’s reputed face lift, murmuring, “But it was Coop’s lines we loved.” . . . The boys have taken to paisley print silk as linings for their daytime jackets and the girls are wearing print or bright colored shoes to match their dresses . . . They’re chuckling over the way the French Academy passed over its own Brigitte Bardot to give the best acting award to the American Marilyn Monroe, who hasn’t made a movie since “The Prince and the Showgirl.” But if plans do go through for Marilyn Monroe to play “Catherine, the Great” to Rock Hudson’s “Peter the Great,” the cultural exchange between Russia and the U.S. will blow up like a sick Sputnik. Mark my words.

Home, Home Again : Like a fresh summer breeze, Sandra Dee blew into Hollywood from Paris after weeks of French flittings and fancy emoting in “The Reluctant Debutante.” Sandra’s mother, Mary Douvan, who accompanied her daughter abroad, tells me, “I had a hard time keeping up with Sandy in Paris. She thought nothing of popping into the kitchens of the most renowned cafes to explain to chefs how to charcoal broil a steak. They didn’t understand a word of English, and Sandra’s French was laughable.” But everybody seems to have gotten the charcoal message.

The day Sandy trotted off to a Dior fashion showing (the day after she walked all the way up the 984-foot Eiffel Tower—“I just wanted to be different from all the rest of the American tourists”) designer successor St. Laurent spotted Sandra in the front row and pressed her into service. Somewhat timid at first, Sandra modeled before the most knowing of Parisian style sophisticates. It was her hardest modeling job in many moons for Sandy.

Because she hasn’t had a free day to herself in ten months, Sandra’s mother ordered for her a pink mink and a matching pink Thunderbird, both waiting for her on her return. And you never heard such goings on in all your life. Such swooning and mooning.

Incidentally, Sandra has been loaned to Columbia for the star role in “The Gidget,” a story of teenagers. And personally, I’m all for sending Sandra abroad every year as an example of what American youngsters are really like. Bright, gay, sweet. What better ambassadress could there be?

Set of the Month: If plaques were given for the busiest actor in Hollywood, Alan Ladd would win hands down. No actor in the business makes more pictures, more fans, more friends—and more money—than Alan. And a visit to the M-G-M set of “The Badlanders” explained why—at least in part. Here’s a film, both Alan and director Delmar Daves tells me, that’s a villian-ridden epic if ever there was one. And yet the atmosphere was one of light-hearted cooperation and a “glad-I’m-in-this-one” attitude among the cast. In fact, I found myself joining Alan, director Daves and the crew in a long round of applause for a group of varmints who finished their Iast scene and walked off to a “no salary” period with hearts full of good cheer. And that speaks well for Alan.

TV’s Thin Man, Pete Lawford and his wife trekked to Europe, but without Frank Sinatra, who had to cancel his world tour due to a bad throat. Have a hunch Frankie disappointed Ava Gardner in Rome (who, it was whispered, squelched her letdown with a Mario Bandini romance) and La Brigitte Bardot in Paris, who, it was rumored, stipulated in her contract for “Paris by Night,” that she would co-star with Frankie “Only if Lauren Bacall stays home.” “We should make some interesting chemistry,” Brigitte told a startled press! Hmmm . . . And speaking of Lauren, some say her now-famous command, “Don’t mention me in the same breath with Frank Sinatra,” was an admission that Frankie prefers freedom to marriage. But others of us know it was only a flip, impulsive answer to a Hollywood reporter Lauren did not want to talk to. She may still feel deeply for Frankie, and his co-starring role with Brigitte doesn’t exactly add to her happiness. But then, that’s Frankie, “all the way.”

Since “Bonjour Tristesse,” David Niven, who springs from movies to TV with the greatest of ease, isn’t the least bit worried about over-exposure. Claims he’s really a sort of “misplaced Cary Grant” and people don’t actually notice him. I disagree. A pleasant ride over the hills of Beverly with David in his swanky new imported car, had me hoping people would notice me! And they did. Never mind about “over-exposure.” I felt like a misplaced Marilyn Monroe. And that feels good.

Kim Novak and Gen. Rafael Trujillo of the Dominican Republic. were ablaze with romance during those late spring days while the General was in town. A youngish man with inexpressive features, and given to clam-like silences, Rafael seems the ideal heart throb for Kim, who is already heralding his return with the same date-by-date routine that marked Mario Bandini’s long-awaited visit. But now, says Kim, it’s all different. The generalissimo will arrive early in July—“or by Labor Day, for sure”—or maybe he’ll just be comin’ ’round the mountain when he comes, say I. Leave none of us hold our breath in the meantime! . . . More romances: Newlyweds actress Frances Farmer and radio-TV management consultant Leland Mikesell and newly engaged Marlon Brando Sr. (Marlon’s dad) and Anna Parramore and Jean Seberg and Francois Moreuil.

Party of the Month

Loretta Young’s party for daughter Judy, with both Loretta and Judy’s friends as guests, was the sort of party that’s seldom written about in Hollywood, where parents and teen-agers mingle with the greatest of ease and enjoyment. From the sidelines of the patio of Loretta’s beautiful Hollywood home, I watched the handsome young men, mostly non-professionals, dancing with mothers and daughters alike. But the one that caught and held my attention was handsome nineteen-year-old Pat Wayne. Pat danced first with his hostess, whirling Loretta around in a laughing, dancing frenzy. Judy was his next partner, and then, for the most marvelous of rhumbas, Pat chose his beautiful mother, Josie Wayne. What a handsome couple they made, so alike in their dark good looks and having such a ball!

People—Places—Perhaps: Tab Hunter, who recently made up his spat with Venetia Stevenson, will be so glad when the handsome Jacques Bergerac returns to Europe for a movie. Jacques has a Gallic eye fastened on the lovely Venetia, and you know those Frenchmen. . . A reader from Ohio writes that everything she reads about Russ Tamblyn has to do with what he doesn’t like in a girl. Her clothes, her make-up, her voice. “What does he want?” she asks. And here’s the answer: All Russ wants is that you remember him, please. Keep him in mind during his two years in the army. Drop him a line now and then at Fort Ord in California. And never mind the clothes, the make-up, the voice. Just don’t forget him.

And to the fan who writes,“Is Nick Adams for real?” I can promise Nick is just about the realest person in town. And after his performance in “No Time for Sergeants,” he’s becoming one of the best actors, with a nibble or two from producers for his future services. And the girl on his arm most often these evenings is the sweet and lovely Margaret O’Brien. . . The Parisians looked askance at Vicki Thal’s snug toreador slacks. Wherever she and John Saxon roamed, eyes were riveted disapprovingly on Vicki’s form-fitting pants. In Paree they’re considered had—pardon the expression—form.

. . . Jayne Mansfield is reaping a fortune from those Mansfield bot water bottles made with Jayne’s exact topography—all hills and valleys. Jayne claims the plastic hags are ideal for summer picnics. Make wonderful pink lemonade containers. I tell you the world’s gotta blow up. I can’t go on like this!!

Behind the Hollywood Curtain

Glimpses About Town: Leslie Nielsen and his Sandy strolling hand-in-hand in Beverly Hills, stopping to window-shop at Raf’s, the record shop. . . . Mothers-to-be Janet Leigh and Rosemary Clooney comparing notes and sporting the newest, chicest maternity chemises. . . . Tommy Sands and his mother disagreeing over career problems. . . Joanne Woodward up and down ladders painting and decorating the new house while Paul finished chores on “Cat on a Hot Tin Roof.” Joanne claimed she was a tired cat with a bot hoof after all the exercise. . . . Eyebrows shooting higher than kites over those printed statements that Phyllis Hudson is now reading by candlelight, all the utilities having been shut off. And rumors have the Brandos helping to support Phyllis until the divorce hearing. In the meantime, Rock trekked off to Acapulco to supervise the building of his new home. A place to get away from it all. . . . Another marital breakup: Judith and Bill Campbell. Bill, Judy charged, insisted on taking “long leaves of absences” from matrimony. . . . See you next month!