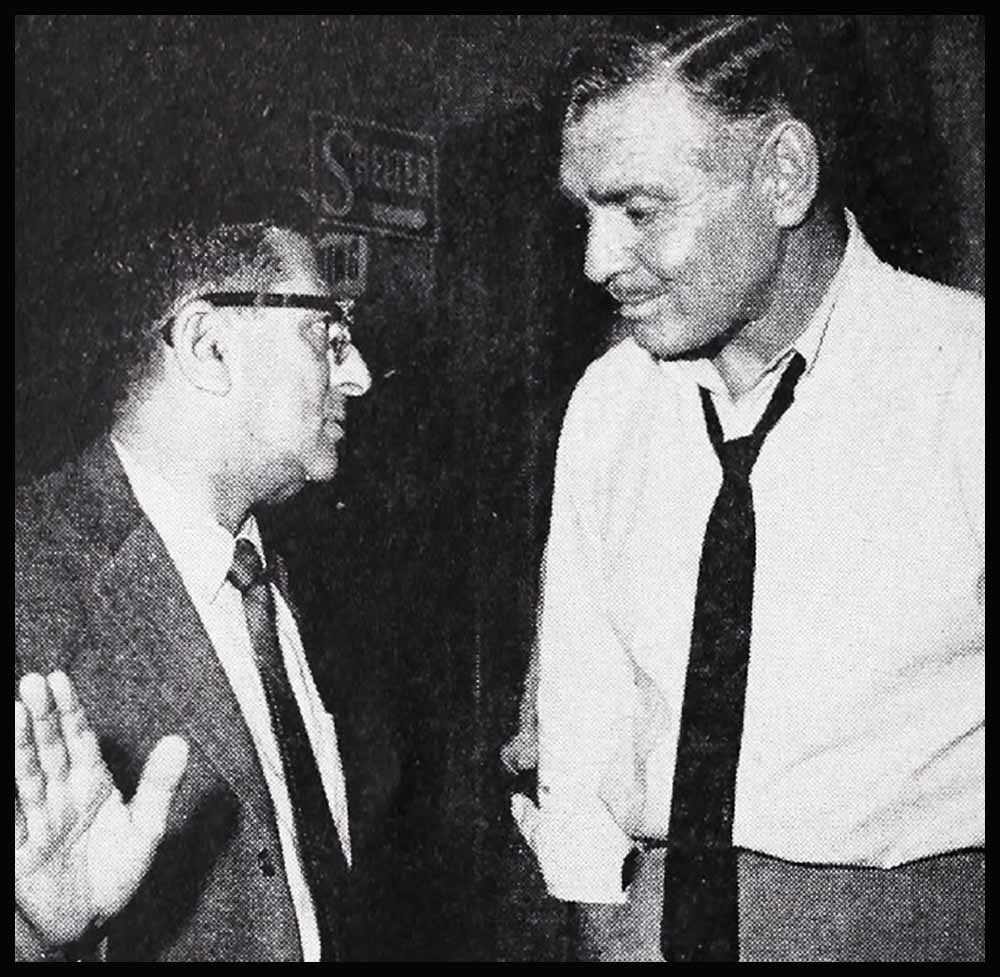 I ask you: Do you feel safer now that Elvis is in the Army protecting you? . . . Dorothy Malone seldom admits anything is impossible, and has an Oscar to prove it . . . If there ever was an actress who looked like a silent movie star, it’s Kim Novak . . . I find Brando of the T-shirt and Grant of the dress shirt similar. Both are great businessmen who can take the shirt off a producer’s back when collecting for making a movie . . . Kathie Hepburn always seems to be tossing her hair out of her eyes . . . Pouting Brigitte Bardot could be called “France’s Angry Girl.” Her kind of anger is welcome.

Clark Gable is a great actor, and he proves it in “Teacher’s Pet.” He was able to give an excellent performance, despite the fact he had to play scenes with me . . . On his TV shows, Dean Martin is letting the public see him as he is behind the scenes: a very funny fellow . . . Hollywood is a divorced father borrowing his son for lunch and the Dodger ball game. It’s the agent saying, “I told you I’d phone you if there was anything.” . . . For a change, I’d like to hear about the people who went to the Actors’ Studio and didn’t become stars . . . Beneath that fierce determination, Maria Schell is a sentimentalist.

I’m in favor of Gisele MacKenzie having a TV program next season . . . Interesting fact about “South Pacific”: On the stage the critics praised it because it employed movie technique, such as using the equivalent of a dissolve to speed into the next scene. On the screen many critics found fault because it was too much like a stage play . . . Henry Willson has the name Bessie Mae Mucho ready to give to an exotic actress . . . I’ve learned that the best way to entertain most actors is to listen to them.

I wonder if Marlene Dietrich lies about her age, claiming to be older than she is, so people will say how young she looks for her age . . . If Monty Clift wasn’t doing Marlon Brando in “The Young Lions,” you tell me who he was doing. I loved it . . . Remember when singers used to close their eyes while singing? Now they snap their fingers . . . No girl on TV can allow the camera to come as close to her as Polly Bergen does, and still look gorgeous . . . Hollywood is a nobody standing in the footprints of a somebody in the forecourt of Grauman’s Chinese Theater while the somebody is behaving in such a manner that he stands a chance of becoming a nobody. It’s tourists mistaking other tourists for movie stars . . . I wonder what would happen if Jim Arness gave Clint Walker a day to get out of Dodge City . . . I think Julie Harris is sexy across the footlights but not on the screen . . . The difference between an actress and a model, claims Suzy Parker, who has been a model and is trying to be an actress, is that an actress is given her lines while a model has to develop her own.

Tab Hunter isn’t going to take singing lessons. It might improve his voice and ruin him . . . To quote the person, starlet Googie Schwab said: “It’s nothing when I have to look unhappy in a scene. I simply wear a pair of shoes that are too tight.” This is her method, Mr. Strasberg . . . Jerry Lewis walks onstage as if he were a messenger boy running to deliver a telegram … I know a fellow who wouldn’t walk across the Street to see John Wayne in a movie. He stays at home and sees John Wayne movies on his TV set for free . . . I believe one of the troubles with the movies is too many new faces. Audiences (include me in) aren’t given the necessary time to become acquainted with most of the new faces before another parade of new faces is marched before them . . . Suggested to Henry Willson for his names file: Gina Lollobridge on the River Kwai . . . When questioned if love interest might be added to TV’s “Wyatt Earp,” Hugh O’Brian answered: “I sure hope so. I’m getting mighty tired of that horse.”

I know Natalie Wood doesn’t like to wear a nightgown because it’s like wearing a sack. But why does Natalie wear a sack dress? . . . Audrey Hepburn and Mel Ferrer look as if they belong together . . . William Holden has a face that someone said resembles a map of the United States: open, agreeable, forthright . . . Hollywood’s the girl at the soda fountain at Schwab’s waiting to be discovered for pictures. It’s the welcome rain and the unwelcome floods on Sunset Blvd. It’s a movie executive at home watching TV and bemoaning the fact that people aren’t going to theaters to see his latest movie . . . Honestly, I saw Jayne Mansfield holding a copy of “The Hidden Persuaders” and wished I had a camera with me. No one would need persuading to look at that snapshot! . . . That’s Hollywood For You.