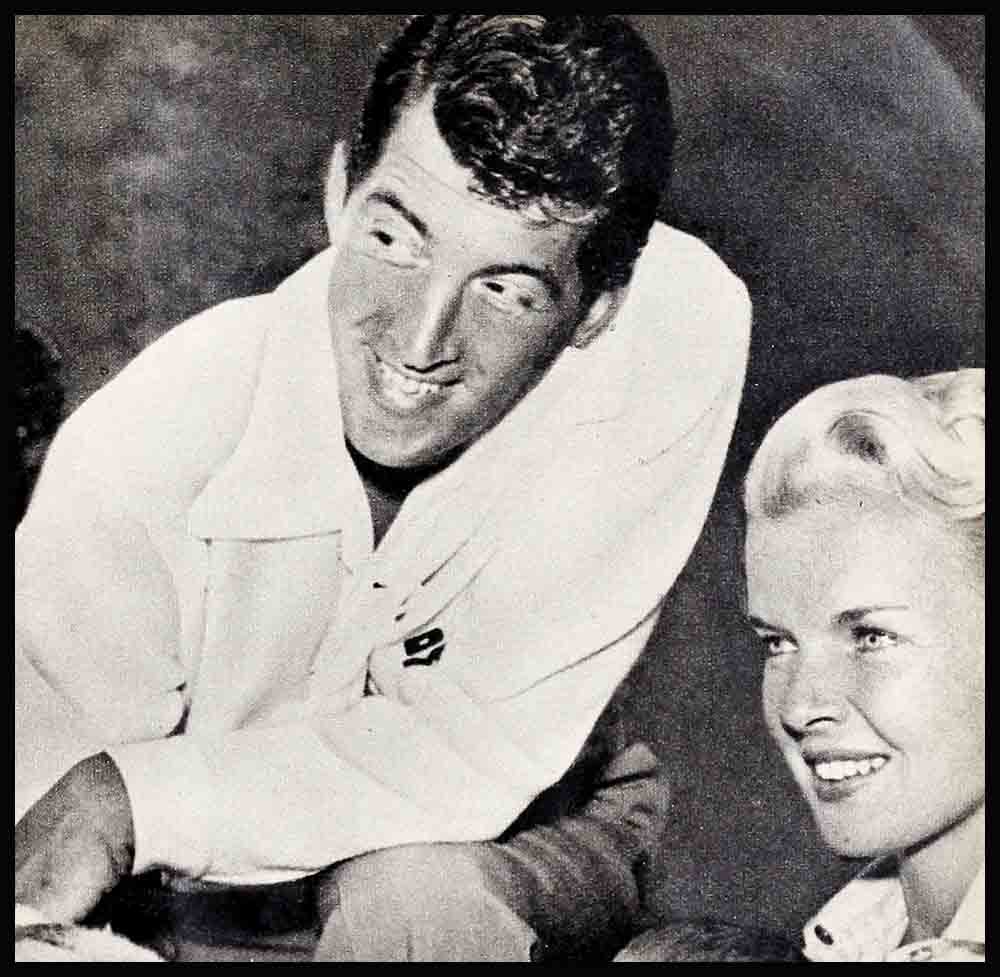 At Photoplay’s Gold Medal Awards dinner, when Dean Martin and Jerry Lewis stood in front of the assembled Hollywood celebrities entertaining the crowd, Jerry cracked: “I don’t mind paying half of Dean’s alimony. But why can’t I have half the fun?” It was a funny line. And it got a laugh.

But nobody present except Martin and Lewis knew that—even then—Dean Martin was no longer living at home.

Early that morning, without any fanfare, Dean had quietly folded his tent and as quietly moved away. Pipe in mouth, his golf bag over his shoulders, three suits on his arm, he’d headed his Jaguar away from the fourteen-room French Colonial home in Brentwood and moved into the apartment of his friend, Mack Cray.

Hollywood as a whole wasn’t too surprised. For months there had been too many rumors to ignore. And they all had one theme—that things were no longer harmonious in the Dean Martin household. Cynics were quick to conclude that for Dean and Jeanne the song had ended—even if the melody should linger on.

The handsome baritone, who cloaks his thoughts and emotions with a quip and a song, would say nothing for the press.

But to his pals, he spoke casually, “Well, things haven’t been going too well for some time. I thought it might be better for us if I’d get away for awhile.”

There were the usual rumors about a third party. But this, Jeanne herself quickly squelched. “There’s nobody else. Not for either of us. We’ve had some misunderstandings. But in three years of marriage, I think a couple is entitled to a tiff. It’s just that Dean is under an awful lot of pressure. He has a lot on his mind. And I’m sure I’ve made mistakes. But Dean never says anything. He’s the quietest guy in the whole world.” She was serious and intent. “I wish he would criticize me more. It’s like hitting in the dark. But when we get this straightened out, I’ll do everything in my power not to make the same mistakes again.”

She had no intention of filing for divorce, she said. “I feel sure we’ll work things out, and I’m very much in love with Dean.”

And Dean, despite his seemingly imperturbable mien and impassive brown eyes, told a friend, “No matter what happens—she’s still a wonderful girl.”

Despite the fact that, to the general public, their difficulty seemed to come out of a blazing bright sky, those close to them felt it had been building for some time. And in a sense, almost from the night they met, when Dean first saw the pretty blonde model in the blue dress and big picture hat sitting ring-side at the Florida night club where Martin and Lewis were packing them in.

Born Dino Crocetti, ten years before Jeanne, Dean’s background was right out of Damon Runyon. A self-made success, he is the son of a barber in Steubenville, Ohio, and he’d gotten a start in show business as the protege of some hometown gamblers who bet on him. He’d been a boxer, he’d cut his first note as a crooning croupier, and he sang and slugged his way up to the championship. Jeanne Bieggers, petite and curvaceous and with big blue eyes, was the Queen of the Orange Bowl, the glamour darling of her own collegiate crew-cut crowd.

And this, as Jeanne once said, seemed to be part of her attraction for him. “Dean liked the fact that I hadn’t been around. That I wasn’t of show business. I was the ‘untroubled youth’ Dean never had.” And Jeanne herself? She fell like a Miami moon for the handsome baritone. Three weeks after they met, Dean told her casually, “We’re going to get married.”

Their marriage began with laughs. With Dean leaving the wedding license home, and Jeanne throwing his wedding ring into the trash can and holding up the ceremony at the last minute to dig through the trash until she retrieved it. With Jerry donning Dean’s pin-striped suit and christening it in the swimming pool, and Dean putting on Jerry’s best-man’s suit and jumping in to keep him company.

But recently their laughs together have seemed to be fewer and far+her apart. And those close to Dean and Jeanne are not too surprised. Many of their intimates felt from the first that the going might be difficult. There’s been the feeling that perhaps Jeanne had come into the picture a little too late in Dean’s life and a little too early in her own—that with her youth and inexperience and with no knowledge of show business, she might be too fragile to weather the demands and make the adjustments required.

It’s no reflection on either of them that they’re a study in contradictions. It was this very thing that attracted them to each other, but it seems, since, to have proved a strain. For that matter, Dean’s a contradiction all by himself, and his pals know that there’s small likelihood he’ll ever change. Nor would his pals (who are sold on him the way he is) think of encouraging him to. Nor could they.

Dino’s a real casual character. The kind of real casual character people think Crosby is. Let him puff a pipe, swing a golf club, sing his song. On his own time, he’s unbothered, unworried, unhurried and as relaxed as a lullabye. Away from the strenuous pace of his work and its hilarity, he’s devoted to golf and quiet and asks only that life be as simple as possible. No night clubs for him—that’s too much like work. No social shindigs, and no formalities. Just let him play with his beautiful bambino, little Dino, Jr., and doze on the rug in front of the TV set.

But—and it’s an important but—his pretty blonde wife, understandably enough, would occasionally like to take her mink coat out for a breath of fresh night air. As Jeanne once said, “Dean’s already lived. He’s been everywhere and done everything. But I’d like to live a little too.”

Yet, for a guy who meant to saunter through life, Dean Martin’s gone way, way off course. For a guy who’s never welcomed pressure of any kind, he finds himself today one of the most pressured individuals alive—responsibilities, both professional and personal, closing in from every direction. At times, when he feels himself almost smothered by them, he’s been heard to remark that he might “deal” himself back to Steubenville. As he says, “I didn’t have these problems there.”

But for all the $2,000,000 Dean makes a year, to long-time friends he hasn’t seemed a thoroughly happy guy for some time. As one pal puts it, “I think Dean feels he’s kind of a guest in the house.” It’s been no secret’ that Jeanne, on the other hand, has felt she’s been excluded from Dean’s hemisphere. On this subject, Dean’s friends have pointed out that it’s been up to Jeanne to prove she belongs there, and that she should hold no hope of ever changing Dean to fit into her own. As a close friend says, “Dean’s the kind of guy who wants to be married—but who should remain a bachelor.”

As we went to press, there was good reason to believe that Dean and Jeanne would reconcile their differences. As one friend said, “They have nothing in common. That is—nothing but love.” His only worry was that if they didn’t get together soon, there wouldn’t be time to “book” a reconciliation, what with the five months’, European tour that’s scheduled for Martin and Lewis

Some cynics were insisting that the song had really ended for the Dean Martins— but they were reckoning without the possibility that Mother Nature has a way of writing special lyrics of her own. As for their friends, they were giving odds that Dean and Jeanne would work out their happiness—if the rest of Hollywood would stand aside and let life and love turn the next card.

And, as a matter of fact, there was reason to believe that life and love already had done so.