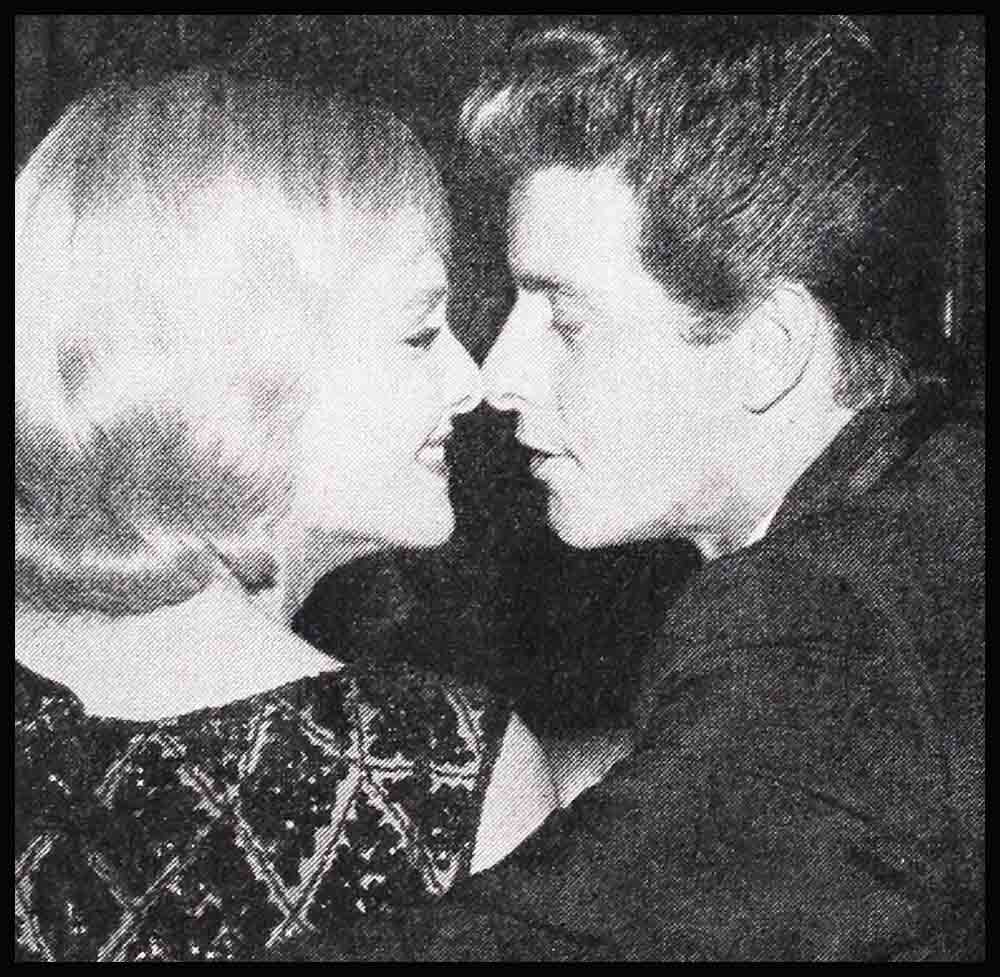 The surprise twosome of the month: Desi Arnaz and Keely Smith. And what a fiery combination. They met while Keely was recuperating front hospital stay in Palm Springs. Desi finally up hope that Lucille BalI would come back him. In fact, he gave his blessings when announced that she and Gary Morton getting married in New York.

Don’t you believe that Troy Donahue and Suzanne Pleshette are altar bound. The romance took a sharp freeze as soon as to returned from the Italian location of “Love Must Learn.” Suzanne’s real love is a New York executive, and all that coo and going over turned out to be a lot of pufflicity. Troy even taken up again with his old flame, Nan Morris. Another former love, Sally Todd, may married on the rebound. She and her husband two months, Charles Cochran, announced separation in October.

Apparently Horst Buchholz wants to for his near fatal accident last summer in German by staying away from that country. He and wife, Myriam (she’s ezpecting in March) want to make America their home. They’re buy a house in Beverly Hills.

I don’t think Harry Karl appreciated calling Carrie from Rome on her fifth birthday. And speaking of the Karls, could it be that Debbie and her mom are on the outs? I noticed that it was Harry’s sister, Mrs. Sol Pollock who cared for Carrie and Todd when Debbie and Harry stayed at the Beverly Hills Hotel (their new home was being readied).

Marilyn Monroe and Yves Montand exploded with perfect “chemistry” in film ing “Let’s Make Love.” It was nothing compared to the chemical mixture of Elvis Presley and Connie Stevens, though. These two have never made a picture together but have discovered each other in a big big way. Elvis dropped Anne Helm like a Fabian record, and Connie politely told Ray Foster she had been spoken for.

Connie and Elvis were together on the location of Presley’s picture, “Kid Galahad,” near Palm Springs. The whole company couldn’t help but notice that the two had more than singing in common. Previous to this, they wouldn’t even admit that they knew each other much less admit to dating I discovered how they kept their romance such a secret: Elvis’ ingenuity. He would never take Connie to a popular spot. They usually met at a San Fernando movie house and both entered separately to rendezvous hand-in-hand in the darkened aisle.

There’s a few years difference in their ages, but ex-Princess Soraya and George Hamilton don’t care. I hear he has made her forget that Hugh O’Brian ever existed and George really lost interest fast in Susan Kohner. But Susan’s seeing Montgomery Clift! George and Soraya were at Lee Anderson’s fancy party for the Bel-Air clam and danced every dance.

staged their big love scene for “Cleopatra.” Liz, I gathered, felt that Eddie would have become embarrassed. And from what I heard about the footage, Eddie probably would have turned a bright orange.

Quite an embarrassing moment at the birthday party Marilyn Maxwell gave for Rock Hudson. One of the unexpected guest was Glynis Johns, who’s dating Marilyn’ ex-husband Jerry Davis.

It was kept very hush, hush but didn’t Gracie Allen suffer a severe heart attack November? George Burns, however, claimed it was only a touch of virus that went her to the hospital.

Glenn Ford probably won’t like this, but the handsome young man with Hope Lange at a beach restaurant recently was Stephen Boyd. I recall the day when Steve admitted freely that if Hope wasn’t a married woman (then Mrs. Don Murray) he would sweep her off her feet. So the day was come, hasn’t it, Steve?

Scooping around: Apparently love has made Esther Williams forget she’s a mother. Her ex-husband, Ben Gage, has assumed chore of rearing the two boys as Esther and Fernando Lamas continue their European junket. . . . A little colt told me that Audie Murphy merger is in hot water gain. . . . Rod Taylor and Anita Ekberg may be getting married any day now. . . . Gardner McKay’s gal who won’t say hes, Dolores Hawkins, may give up her 70,000-a-year modeling career—but only make her debut as an actress in a TV series. . . . Guess Diane Varsi can’t shake drama out of her system. I mean that she’s back acting, but not in the movies. She produced, directed and appeared in one of those method acting dramas in San Fransisco. . . . Joanie Sommers’ movie debut “Everything’s Ducky” was a disaster. They had to use another female’s voice for lip movements. Joanie’s voice didn’t register on the soundtrack. . . . Likewise, Natalie Wood’s songs in “West Side Story” are sung by another. Natalie had taken singing lessons for the role, but she had to be old that acting, not singing, was her forte. . . . Diane McBain and Charles Feldman, aging producer, are an item.

Aren’t Edd Byrnes and Bob Logan (the new parkling lot attendant in “77 Sunset Strip”) on the outs? I don’t think Edd likes build-up Bob is getting. Edd used to have the parking chores, and since he has been promoted to detective, Bob’s roles are getting larger. Figure that one out!

Luciana Paluzzi winged into town (minus baby and her mother) to divorce Brett Halsey. She avoided seeing Brett for days, and dated his best friend, David Hedison. However, the estranged ones met accidentally in a Beverly Hills restaurant, and don’t surprised if they never get the divorce. They didn’t appear on the outs while sharing pizza that night.

Guess The Clan didn’t take the hint from heir rude actions at Eddie Fisher’s opening. They gathered again for Sammy Davis, Jr.’s opening night at the Cocoanut Grove. Leader FS wasn’t on hand because he was appearing in Las Vegas, yet the rest of the members (Dean Martin, Joey Bishop, Lawford and even Sammy) came through with the same unfunny jokes and unfunny routine. Despite this, Frank appeared to be back in good standing with President Kennedy when the latter was in Los Angeles for a big dinner at the Palladium.

The longstanding rumors of trouble between Tony Curtis and Janet Leigh were renewed when she changed her plans and came home from the “Taras Bulba” location in Argentina ahead of Tony. She claimed she wanted to bring the children home for Thanksgiving, but can’t you buy a turkey in South America?

Isn’t the reason Natalie Wood spent two months finding another place to live because Warren Beatty had to approve the domicile, too? He may be hanging his levis there one day soon.

Short takes: The John Waynes are building on another room for the baby due around Apple Blossom time. . . . Ben Gazzara swore that he and Janis Rule weren’t altar bound—then he married her! . . . Didn’t Rosemary Clooney turn down another plea by Jose Ferrer to let bygones be bygones? . . . The Mickey Callans could announce some stork news at any time. . . . Seems that those on the inside weren’t surprised at all by the Dinah Shore – George Montgomery split. “It’s been coming for two years,” their friends said.

Could George Jessel be behind the Henry Silva-Cindy Conroy split? The estranged Cindy and George seem to be very friendly, and he has dedicated his new book, “Halo over Hollywood,” to her.

Pamela Tiffin really trustrated the Hollywood wolves. She turned down date after date while in town tor “State Fair.” She frankly told them she got many more kicks studying Latin than going out on the town.

No, Lee Patterson didn’t get his nose bobbed. He had to have it re-set because of an old injury in which it was broken and healed improperly.

Scooping around: Frankie Avalon has a big crush on Ann-Margret, but it’s wealthy young Bert Sugarman who has her sewed up. . . . I don’t think the Alan Ladds are too high on their daughter Alana’s romance with Robert Westbrook, who made all those nasty charges in divorcing Judi Meredith. And it didn’t help matters when Bob took Mrs. Ladd for a spin in his new sports car, and she wound up in the hospital as a result of an accident.

What a Freudian touch to the film, “Freud”—Montgomery Clift portrays Freud as a man, but a five-year-old girl plays him as a boy. Naturally, the girl is dressed like a boy.

Sign ot the times, Louis Prima didn’t d so well without Keely Smith at the Moulin Rouge. The show closed tar ahead of its planned run through the Christmas holidays. Keely is negotiating to do a situation comedy TV series, and doesn’t plan any nightclub work for a long time.

So far cupid has been stymied in the romance of Dick Beymer and French actress Dany Saval. Her husband refused to give her a divorce last September. Dick confided to a friend that she may have to get a Mexican divorce. But then I heard from another source that the romance may be kaput anyway.

Friction seems to be eased a bit with Sammy Davis, Jr. and May Britt. They were near splits-ville right after the baby was born. But now I hear they’re expecting again.

The Inside: I don’t think Cary Grant and Doris Day will ever be teamed in a picture again. They had another blow-up on the “Touch of Mink” set. And Doris didn’t make any friends of the others in the company, either. Cary gave presents to the cast and crew, but Doris walked off the last day without even saying so much as goodbye—much less a thank you. . . . Isn’t Dorothy Provine trying to get out of Her Warner Bros, contract now that they dropped her “Roaring Twenties” series? . . .

Since the split, Efrem Zimbalist, Jr. has been living at a motel. Must be a lonely life, but Efrem doesn’t seem to mind it. Stephanie is staying at the house.

I’m glad Eva Marie Saint is happily married. Her love scenes with Warren Beatty in “All Fall Down” are more realistic (if that’s possible) than the amour stuff between Warren and Natalie Wood in “Splendor in the Grass.” They even had to cut a couple of scenes in “All Fall Down” that were too hot for the censors.

Puzzler of the month: What one time big actress believes she still looks like a 20-year-old and spends thousands of dollars each year for delicate, involved face-lifting treatments?