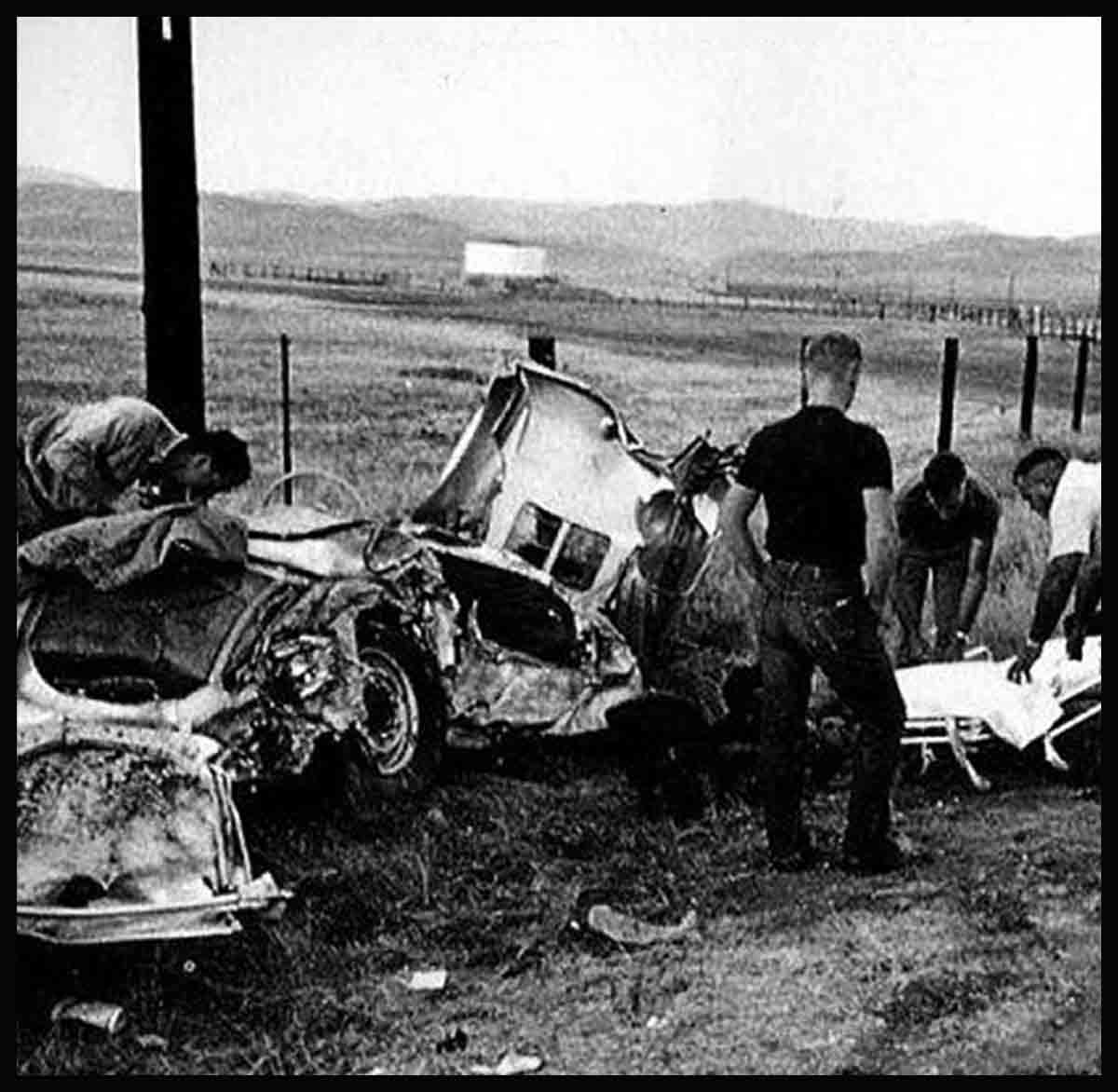 Can Dean Stockwell Shake Off The James Dean Jinx?

In those hours after he climbed out of the twisted wreckage of his car and left it behind . . . in those hours Dean Stockwell started taking his first steps in the tong walk away from a shadow . . .

The shadow that has followed him and haunted him since that da of September 30. 1955, when Jimmy died . . .

Now what made me think of that? Dean thought, cruising in his Renault that bright summer day. He felt the hot Hollywood sun warm the side of his face and neck. Traffic was light; the road ahead was clear. From his radio, he could heat the beginning of a Bach cantata. The music’s like acting, Dean thought. Like working with Connie Stevens, Mark Damon or Millie Perkins, in the theater group. Building together. Finding the elusive themes of a great play and slowly fusing them until the play really lives—and you live because it does.

Aw, come off it, he thought. Stop sounding like a hammy philosopher. Or worse yet, like the sound-track of one of his movies. Twenty-three movies, he thought. And all of them before he was fifteen. Dean laughed to himself. And then he concentrated on the road ahead.

Automatically, he slowed down at an intersection, even though the light was with him. A sudden blurring squeal on his right made him clench the wheel and slam down on the brake. But it was too late. Something blotted out the sun on his right. Something that didn’t stop but kept on coming. Then the horrible jarring crash . . .

Dean opened the side door of his car and got out. He wasn’t hurt. He saw that his car was only slightly damaged. And the other driver seemed okay. A minor accident, yes; but a major event in the life of Dean Stockwell. He had been in a collision, he had been uninjured, he had walked away. And in walking away, he hadn’t just walked away from an accident; he had also walked away from a jinx—a jinx that had been haunting him for three years, ever since the tragic death of Jimmy Dean. . . .

A jinx. . . . it didn’t matter that Dean Stockwell had never met Jimmy Dean, had only seen him in pictures. After Jimmy’s death, people began to accuse him of aping Jimmy, of copying his acting style and personal habits. It was silly. Sure, there were some likenesses; but there were more differences than similarities. But this didn’t stop magazine writers from trying to get Stockwell into the Jimmy Dean mold. And it hurt. Stockwell had the highest respect for Jimmy Dean, the actor—the only Jimmy he had ever known—but he wanted to be accepted for his own abilities as an independent, unique human being.

But the magazines wouldn’t let him. They harped on the similarities between the two, manufactured others where they didn’t exist.

There was the business of their physical appearance. Articles were published stating that they looked very much alike. But anyone who took the trouble to really compare their photos could see that this just wasn’t true. A faint resemblance, yes; but ‘twins’ (as one magazine put it), no.

And their height: A magazine claimed they were both five-foot, ten-inches tall. Stockwell was five ten, but Jimmy—although the studio biographies claimed he was that height, too—was actually only five seven. And Jimmy weighed a good deal less that Dean.

True, they both wore horn-rimmed spectacles, and for the same reason. Neither could see very well without them. In fact, Jimmy was blind as a bat without glasses, although he didn’t wear them onstage. And once, because of this, in the middle of a play he almost tumbled into the audience. Stockwell, on the other hand, doesn’t wear glasses at all any more, except when he’s driving or reading. He needs them all the time. But he doesn’t wear them in public ’cause he doesn’t want people to say he’s copying Jimmy.

A jinx. . . . Copying Jimmy . . . Once a critic, in reviewing Stockwell’s performance in the picture “Gun for a Coward,” accused him of “incredible mimicry of Jimmy Dean.” Kind of a funny accusation, a friend of his pointed out, when you realize that Stockwell had been an actor long before Jimmy dreamed of being one.

A jinx. . . . One writer pounced upon the fact that both boys had been unhappy at college, that both had left before graduation. The writer was right, but he neglected to point out that they had left college for exactly the opposite reasons. Jimmy left after two years because he wanted to be an actor, not a lawyer. Dean left too, after one year, because he had been an actor. It was because his fellow students remembered him as a famous child actor, and treated him like a celebrity instead of just another fellow, that he gave up college. Quite a difference.

A jinx. . . . Some people claimed that Jimmy Dean and Dean Stockwell were both rebellious, sloppy and offbeat. But these people never bothered to say exactly what they meant by these words.

“Rebellious,” for instance. When they used this word in describing the two boys, what they should have been saying was “honest.” If you ask Dean Stockwell a straight question, he’ll give you a straight answer. If he has a strong feeling, he’ll express it—directly. He’s bluntly honest.

And Jimmy was the same way. When Pier Angeli married Vic Damone, Jimmy was still head-over-heels in love with Pier. So he stood outside the church while the wedding was taking place. Exposed and painful as an aching tooth. No attempt to hide. Hurt. Suffering for all to see. What mattered wasn’t what others thought. He had to be there. He had to be true to his own feelings, to himself.

Sloppy? That’s a funny word to apply to Dean Stockwell. And the word was first used about him when someone didn’t bother to find out why he was doing what he was doing. And what was he doing? Wearing light, seersucker pants in New York in the middle of winter. And why? He had come to New York to rehearse for a play. In California he wore the usual summer suits. But in New York he was so busy rehearsing during the day and studying his lines at night that he hadn’t found time to buy warm winter clothes. So somebody wrote that he was sloppy and compared him to Jimmy Dean. To Jimmy—who also threw himself so fully into what he was doing that sometimes he just couldn’t be bothered to worry about such things as suits and ties.

Offbeat? Well, maybe. In their taste for music, at least. Unusual stuff. Stockwell digs Charlie Parker and Miles Davis the most. But also he’s seriously studying the piano and is crazy about Bach, Beethoven, Brahms and Mozart. A columnist said that the night his picture “The Careless Years” premiered he went to a concert.

Jimmy also seriously studied the piano, with the composer, Leonard Rosenman, in the winter of 1953. Like Stockwell, he was crazy about Bartok. But his first love, as everyone knows, were the bongo drums.

Jinx. . . . The one thing that Jimmy and Dean Stockwell had most in common, according to the magazine writers, was speed. True, Stockwell was once crazy about fast cars and drove a flame-red racer with the throttle wide open. Off he’d go, alone, not caring where he was heading, passing everyone on the road. Fast. But today, all that is over. He’s outgrown his need for high speed.

Yes, one day three years ago on the road to Salinas, Jimmy Dean ran out of luck, smashed up his Porsche and died. And after his death, another Dean—Dean Stockwell—seemed jinxed, jinxed to always walk in the shadow of Jimmy Dean. But a few months ago, when Stockwell was in a minor accident, he was lucky. He walked away from a collision—and from a jinx. A jinx that will never haunt him again.

It is a quote. PHOTOPLAY MAGAZINE NOVEMBER 1958