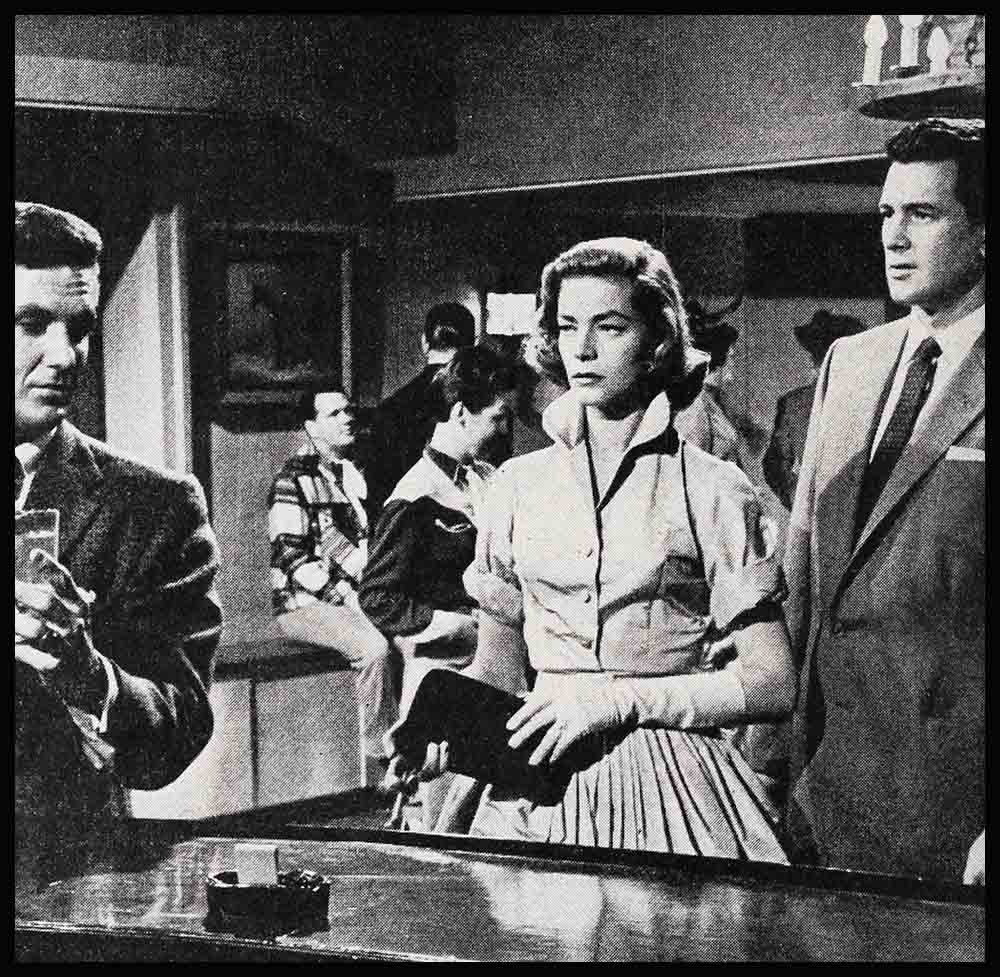 Ernest Borgnine, Ray Milland and other able players add warmth and humanity to a near-documentary treatment of the “security risk” problem. Suggested by a real-life case, the suspenseful story casts Borgnine as a long-time civilian employee of the Navy. Suddenly, he is called a security risk and suspended from his job. His plight also brings tragedy to his wife (Virginia Christine), his teen-age children (Diane Jergens, Warren Berlinger) and even to little Sandy Descher. Lawyer Milland takes on the touchy assignment of defending Borgnine; Navy officers Frank Lovejoy and Nina Foch are thoughtful investigators; Dean Jagger is the third “brave man” of the title. FAMILY

Never mind what you think the title means! The pas-time in question is baseball, especially as played by the Little Leaguers of the country. Here’s a bright, sprightly family comedy, with wonderful Tom Ewell as the suburbanite husband and father, persuaded by wife Anne Francis to cozy up to their rather aggressive male child. ingratiating Rudy Lee. But Anne isn’t too happy when Tom gives way to his baseball mania by agreeing to take on the managership of a local (and losing) Little League team. It’s a noble gesture on Tom’s part, but it backfires right in his innocent face. For one thing, little Rudy is on the opposing (and offensively winning) team. For another, comely widow Ann Miller has a son on Tom’s side, and Tom misunderstands her motherly maneuverings. FAMILY

A dazzling title-role job by newcomer Carroll Baker speeds up the leisurely study of an eccentric lot of Southerners. Luscious in limb and feature, Carroll portrays a rather retarded lass, a nineteen-year-old who refuses to be a wife to her husband until her twentieth birthday. Apparently a child in mind, she is both shrewd and shrewish with the impatient Karl Malden. Like the falling-down old mansion they share with her maiden aunt (Mildred Dunnock), they’re lost in a vague succession of days—until a wily alien barges into their midst. Eli Wallach, a Texan of Sicilian descent (formidable combination!), has a vendetta with Karl, who sets fire to Eli’s too-profitable cotton gin. Sex is tossed into the moviegoer’s face with about as much subtlety as a Mack Sennett custard pie. ADULT

Lively rock ’n’ roll music and the gay antics of some attractive young players give interest to a teenager-parent tale. At ease in his secondary role in “The Unguarded Moment,” the very handsome John Saxon has more difficulty with this lead. He’s expected to follow in the footsteps of his doctor father (Edward Platt), but his mother (Fay Wray) and his sweetheart (Luana Patten) sympathize with his musical ambitions. The tension builds as John and his youthful bandsmen compete in a disk jockey’s contest and pitch for a summer-camp job. George “Foghorn” Winslow is appealing as John’s kid brother. But Sal Mineo’s following won’t be pleased with the minor chores assigned to him. However, Sal beats the traps and wrestles with his girlfriend enthusiastically. FAMILY

Elvis Presley’s first picture shapes up as an agreeable Southern-type Western, sturdy in content but apparently slapped together in too much haste. As his older brothers, Richard Egan, William Campbell and James Drury have fought the losing battle of the Confederacy. The trio made off with a Union Army payroll, and they have the loot with them when they return to mother Mildred Dunnock. For Egan, who was believed dead, the homecoming is marred by the discovery that his ex-fiancee, Debra Paget, is now Elvis’ wife. The emotional conflict between the brothers is brought to a climax when Union officials seek the missing payroll. Presley’s song numbers fit into the proceedings pretty smoothly, and he’s commendably relaxed in quiet scenes, but the dramatics at the end throw him. FAMILY

Written on the Wind (U-I, TECHNICOLOR)

Though Rock Hudson and Lauren Bacall lend balance as two likably normal people, it is Robert Stack’s performance that gives conviction to this flamboyant drama. As the irresponsible son of oil millionaire Robert Keith, he meets secretary Lauren on a trip to New York, wins her in a quick courtship. In Texas as his bride, she’s plunged into a hopelessly involved situation. Jealousy is mingled with Bob’s friendly devotion to Rock, for his father relies on the steadier man in running the firm. As Bob’s sister, Dorothy Malone is addicted to drinking and man-chasing. And Rock has trouble concealing his love for Lauren. In the violence that inevitably explodes, Bob remains a believable person. ADULT

Here’s an ingenious mystery that puts the moviegoer right into hero Richard Basehart’s situation, to feel with him growing bewilderment and desperation. Dick expertly plays a talented movie producer, exiled from Hollywood because of a scandal involving a woman. A reformed character, he is now the right-hand man of British producer Roger Livesey and is happily married to the boss’s daughter (Faith Brook). But a series of letters threatens his future. They’re from a girl begging for his love and claiming that she has been his mistress. Blackmail? No. This Dick realizes when he meets the writer—sweet-faced, straightforward Mary Murphy, doing her best work so far, as an American actress in England. Though Dick is sure he’s never seen her before, her story and her manner are so convincing that he begins to doubt his own sanity. It’s a neat puzzle. ADULT

A beautiful Spanish film (with titles in English) quietly captures the atmosphere of Spain’s countryside and the religious feeling of its people. Told as a sort of legend, the story centers on a small boy (enchantingly portrayed by Pablito Calvo) brought up by a group of Franciscan friars. As a baby, he is left outside their monastery. Since his parents cannot be found, the brothers decide to adopt him. Surrounded by love and understanding, he grows into a delightfully normal, mischievous boy. Each of the friars is presented as a distinctive personality, so the movie is rich in character. FAMILY

Like most of the important Japanese films brought to this country, this sturdy tale of action pictures the Japan of centuries ago in one exquisite shot after another. The seven men of the title are all samurai, but they aren’t the splendidly attired, mighty warriors that the term suggests. They are simply tired, tough professional soldiers. Like Kipling’s Tommy Atkins or the peacetime GIs of “From Here to Eternity,” they are neglected or distrusted by the civilians—until their fighting strength is needed. These seven are brought together through a frightened appeal from a village threatened by bandits. ADULT

Two Loves Had I (JACON, TECHNICOLOR)

Opera-lovers will find moments of interest in this Italian-made music-film (dialogue in English) based on the life of Puccini. Portrayed by Gabriele Ferzetti, the composer of “La Boheme” and “Madame Butterfly” is seen first as a brash unknown storming the musical citadel of Milan. Success comes quickly, overshadowing his personal affairs. Marta Toren is lovely and wistful as the sweetheart who bears him a child before he’s gotten around to marrying her. Hers is a life of lonely waiting, but Puccini’s heart remains with her, in spite of his brief fling with prima donna Nadia Gray. While artists from La Scala are heard in excerpts from the operas, the picture could have used more music. ADULT

Rumble on the Docks (COLUMBIA)

The junior version of “On the Waterfront” is notable chiefly as the debut of James Darren, a good-looking youth who shows some acting promise. As leader of a teen-age gang that’s constantly attacked by rougher rivals, he has traits of decency and responsibility. But a feud with his crippled, crusading father (Edgar Barrier) makes young Jim easy prey for the persuasions of union racketeer Michael Granger. Even his gentle girl friend (Laurie Carroll) can’t make the boy see that he’s lined up on the wrong side. There’s plenty of action and tension, and a vigorous rock ’n’ roll number is contributed by Freddie Bell and his Bellboys. FAMILY