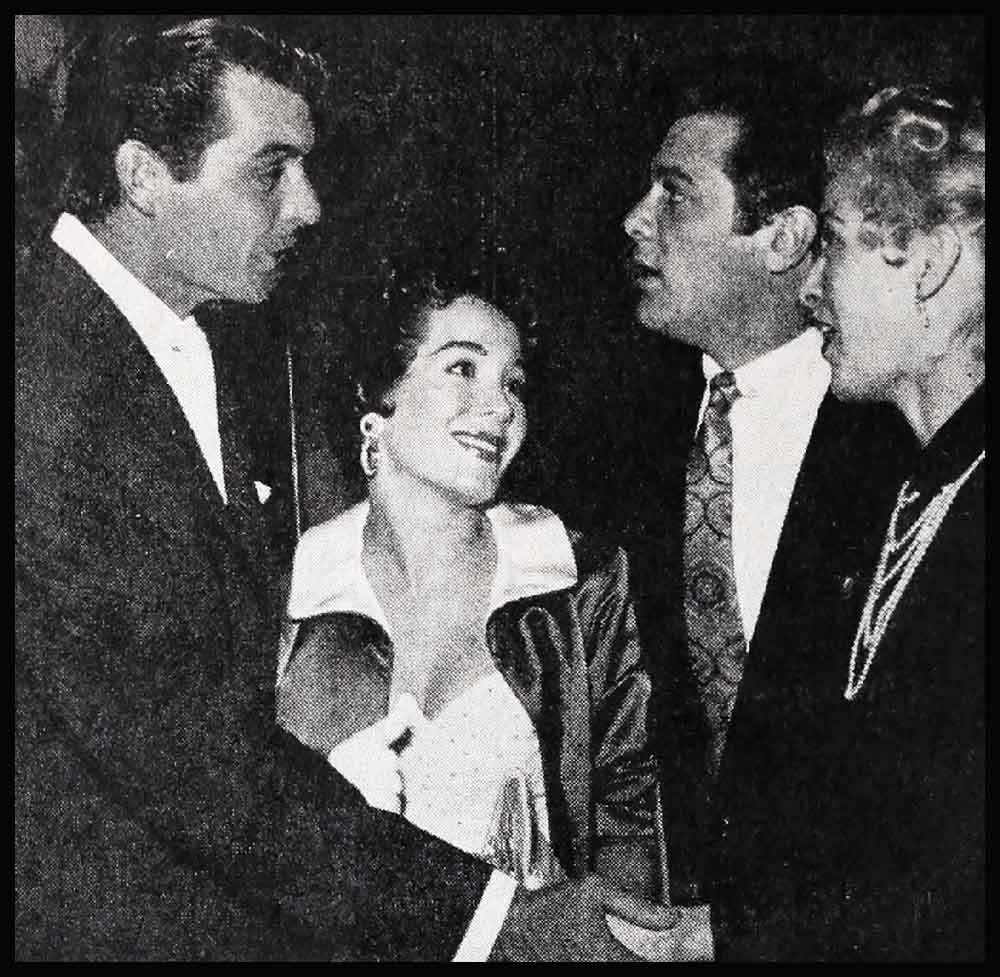 There were lots of after dark doings at which Hollywood glamour-pusses had fun, ranging from the offbeat to the crazy.

On the legit side was the exciting opening of “Anniversary Waltz.” with Howard Duff and Marsha Hunt. Ida Lupino, looking lovely, was as nervous as all git-out, finally calmed down before the final curtain when her hubby got so much applause for his fine performance. Saw Leigh Snowden with Dick Contino; Eleanor Parker, Jane Withers with Kurt Hirsch, the Edmund O’Briens to name a few.

When Estelle Allardale opened her new Beverly Hills salon with a fashion show and party. Jack Dempsey, her best b.f. acted as host! Ogling the all pink and white decor, sipping and supping a lavish buffet, were the Jack Webbs, Eleanor Powell, Cesar Romero, Sonja Henie, James Dean (!) Jeff Donnell and Aldo Ray, Gaylord Hauser and a bunch of local socialites. And if that isn’t a mixed crowd.

But you ain’t heard nothing yet. There have been many crazy offbeat reasons for staging parties, but the one given by the Villa Capri (an Italian food cafe that gets a big play from the film crowd) takes the cake—or should I say pizza? Anyway, owners of the Capri tossed a big cocktail and dinner party (strictly invitational) to celebrate it’s completion of two new washrooms. James Dean was there with Lili Kardell: Bob Stack brought party Rosemarie Bowe, Bob Francis and May Wynn were a two. Ditto Gary Crosby and Barbara Drake. The Bob Mitchums, author Herman Wouk were among those having fun.

A different sort of party was given by author Danny Blum who jammed his place with old and young to honor old-time stars. Some of the kids there who already have their names in lights never even heard of the guests of honor: Mary Pickford, Kathlyn Williams, Queenie Smith, Alice Joyce, Anita Stewart. Mingling among them were Bob Stack with ever-lovin’ Rosemarie Bowe, the John Lunds, the Hestons; James Dean, George Nader, Jeanne Crain and Paul Brinkman.

Mickey Rooney, that talented bundle of dynamite. found time to whip up a night-club act and have himself an exciting opening night at the Cocoanut.

When Janet Leigh and Tony Curtis discovered Rory Calhoun was doing a one-hour live TV drama “The Champion,” they sent wires to about 200 of their friends saying: “Such courage deserves recognition so we’re giving Rory a party.” And they did—at Romanoff’s. On hand were Julie Adams and Ray Danton, Kim Novak with Mack Krim, Virginia Cray, Bob Wagner. Rita Moreno with Jeff Hunter, Joan Weldon with Alfie de la Vega, the Guy Madisons, the Andy Devines, the Bob Mitchums, Jayne Mansfield and Hugh O’Brian, the Jack Lemmons, May Wynn and Bob Francis, the Groucho Marxes, Pat Crowley, the Kirk Douglas—to name only a few!