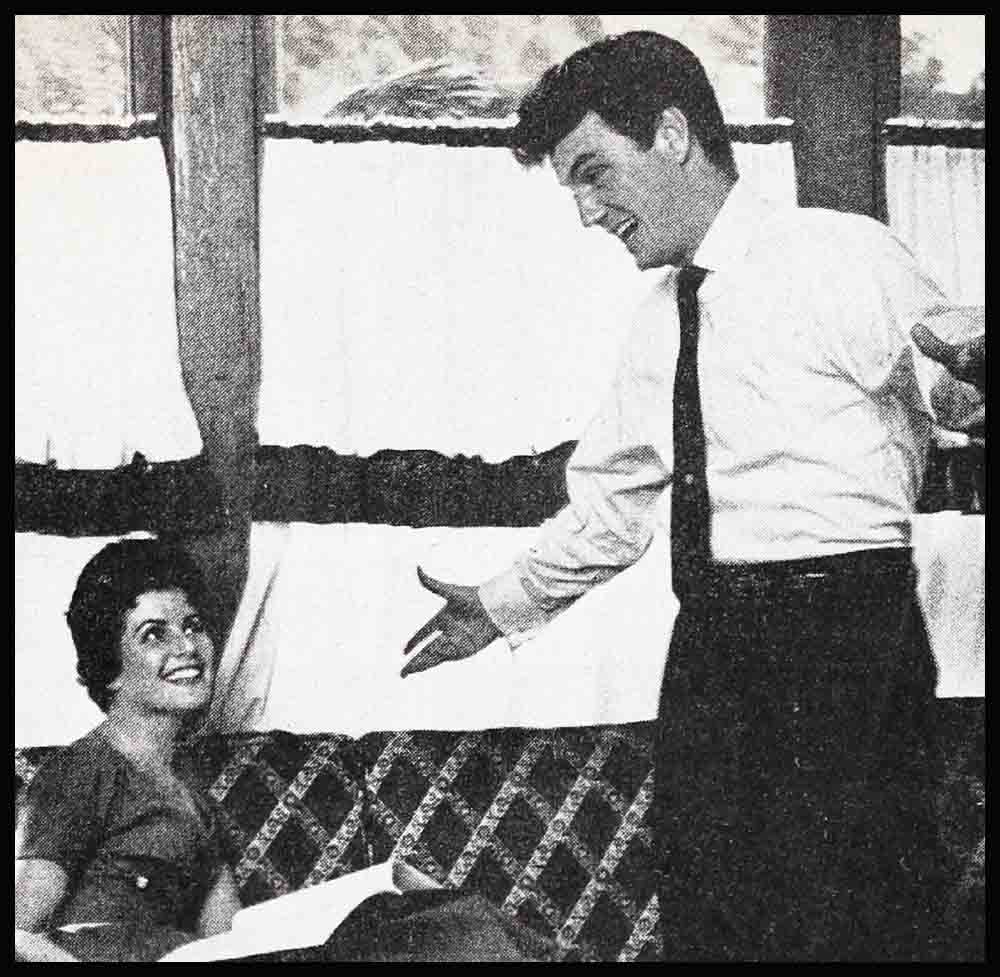 For six years, Bill Campbell was just the kid with the engaging grin, doing one small role after another—now you see him, now you don’t. There were times when he himself thought he’d never get any further. And the idea hurt because he was filled with driving ambition. This is the boy who once had the sheer, brassy nerve to try stealing a scene from Spencer Tracy, of all people. Tracy got back at him by becoming his ardent patron. It was this actors’ actor who told a discouraged William Campbell, “You quit and I’ll spank you!”

Bill didn’t quit. Now, after six uneasy years, he has had two excellent parts in succession: the naive farm boy of U-I’s “Man Without a Star”; the depraved young criminal of Columbia’s “Cell 2455, Death Row.” He has contracts with Wayne-Fellows and with Kirk Douglas producing unit. Best of all, he has a wife who, in his own words, “looks like Ursula Thiess or Elizabeth Taylor, but with the spiritual quality of Ann Blyth. To think,” he exclaims, “that this beautiful woman would marry me, when she could have had some beautiful guy.”

Attractive as Bill is, he could hardly be described as beautiful. He has alert hazel eyes under quizzically arched brows, black hair often worn at a length that makes Tony Curtis’ usual coiffure look like a crew cut. But a couple of fortunate accidents during Bill’s childhood (a fall and a blow from a misaimed hockey stick) broke his nose twice and gave his profile an interesting irregularity that takes him safely out of the pretty-boy class. Born in Newark, New Jersey (on October 30, 1926), he still has a pleasant tang of Greater New York in his voice.

As a youngster, Bill sometimes dreamed of an acting career. He never mentioned this faint yearning, because his parents were solid, sensible people, whose idea of a proper professional man was a doctor, a lawyer or an accountant. At sixteen, just out of high school, he beat Uncle Sam to the punch by enlisting in the Navy. Afterward, he found himself at loose ends. His service on a mine sweeper in the Pacific didn’t qualify him for any particular civilian job. He thought of one, then another, and couldn’t stand any of them. Finally, he decided to take a journalism course at Columbia, fondly picturing himself as the dashing cub reporter, hat pushed back, announcing, “I’m the press!” But the glamour chilled very quickly. “I didn’t have the temperament for it,” Bill says. “I needed something where I could yell a bit.”

It was a former high school teacher of his who steered him in the right direction, sending him to the Feagin School of Drama. As Bill had expected, this step aroused no enthusiasm in William Campbell. Sr. “I’ll give you six months.” Pop said. It didn’t take William, Jr., quite that long to prove himself, and no words were needed for his answer. After a school production of “Dinner at Eight,” the big, proud smile on his father’s face told Bill that he had won his point.

He moved on to the American Theatre Wing. Here he took twelve courses a day, getting up at 6:00 A.M. in order to reach New York by 7:30, sometimes returning home at 1:00 or 2:00 A.M. “I didn’t want to miss anything,” he explains. He haunted the Museum of Modern Art, seeing all the movie classics in the Film Library’s collection. In three years, he did thirty plays in summer stock. Eventually he reached Broadway, but the two plays he appeared in folded with near-record speed. When he was offered a role in the road company of “The Man Who Came to Dinner”—a bit that gave him about one minute on-stage—Bill told his agent, “I’ll take anything!”

As it turned out, this was a wise choice. For one thing, the role earned him ninety dollars a week. For another, the company’s Los Angeles engagement brought Bill two cards from studio talent scouts. His introduction to the movie business, however, was pretty frustrating. At the first studio, he was enchanted to find a big car waiting for him at the gate, to whisk him across the lot to the scout’s office. “It was like a dream,” he recalls. This heady sensation continued after he’d done a reading. “Where’ve you been?” the scout demanded. “When you get signed and you become a star, you remember to speak to me!”

A still dazed Bill found himself in the boss’ office—“all gold and plush.” Just as he sat down, the phone rang. The big man stayed on the phone for more than ten minutes, pausing only to give quick decisions to employees who came in with questions. Bill sat there patiently. When the boss hung up, he told Bill graciously, “Drop in any time”—and waved him out of the office! Outside the building, no studio limousine was waiting for the baffled young actor; be had to walk all the way back to the gate.

At Warners, he was luckier—at first. Beginning with “The Breaking Point.” he made four pictures? After seven months, Warners let him go. “I was really in a fright then.” Bill admits, “despairing and unhappy.” Then M-G-M offered him a role in “The People Against O’Hara,” a Spencer Tracy vehicle.

“I was afraid of Mr. Tracy.” Bill says. “Every time I saw him on the set Pd hide behind a camera.” But eventually the two had to do a scene together, and Bill recklessly planned to steal it from the star.

The scene cast Bill as a stubborn witness, being furiously cross-examined by Tracy,. Bill was shaking and dry-mouthed. But his purpose was unchanged, and he did manage to get the first line out. “Then I felt I was starting to move. Mr. Tracy was really getting mad, and I knew I had him.”

When the cameras stopped rolling. Bill saw Tracy walking slowly toward him, slowly clapping. Stopping in front of Bill, Tracy said softly. “You . . . little . . . so-and-so! . . . Are yon under contract?”

“You will be by tonight.” Promptly, Tracy put in a call to Dore Schary, head of production at Metro. And the prediction came true. But, in spite of Tracy’s backing, leading roles proved elusive, and again Bill was dropped.

At U-I. Bill tested for “Six Bridges to Cross,” which, of course. went to Tony Curtis. But Kirk Douglas, planning “Man Without a Star,” saw Bill” test and said, “I want him!”

As soon as Bill felt that he had a real foothold in movies, his first thought was of his parents: “Now I can repay them.” His father. whose roots are in Newark (according to Bill), wouldn’t come to California, though he may make a visit after his retirement from the Water Department. So Bill resolved to give his mother a real vacation whirl in Hollywood. At the airport, he slipped up and put his hands over her eyes. Her first words were: “Bill, don’t you dare tell your father how much that airplane ticket cost!”

The newest member of the Campbell family is that beauty the former Judith Inmore. Bill first met Judy six years ago. They began going steady immediately. but with no marriage plans, for Judy was interested in a movie career of her own. Bill eventually found that the career was less Judy’s idea than her mother’s. “I saw myself as a knight on a white charger.” he laughs, “riding to her rescue, ordering, ‘No career!’ ”

However, Judy’s mother gave in gracefully, and Bill and Judy were married on October 25, 1952. In the young Campbells’ circle of friends are many people outside show business, some dating back to Bill’s Newark days.

“When I was little,” he says, “I never knew there were different sets or groups.” Bill realizes that now it may not be so easy to keep his balance. But one fact makes it extremely unlikely that he’ll ever have a case of swollen ego. “I’m afraid of my father. If I didn’t keep a level head. he’d let me have it light in the kisser!”