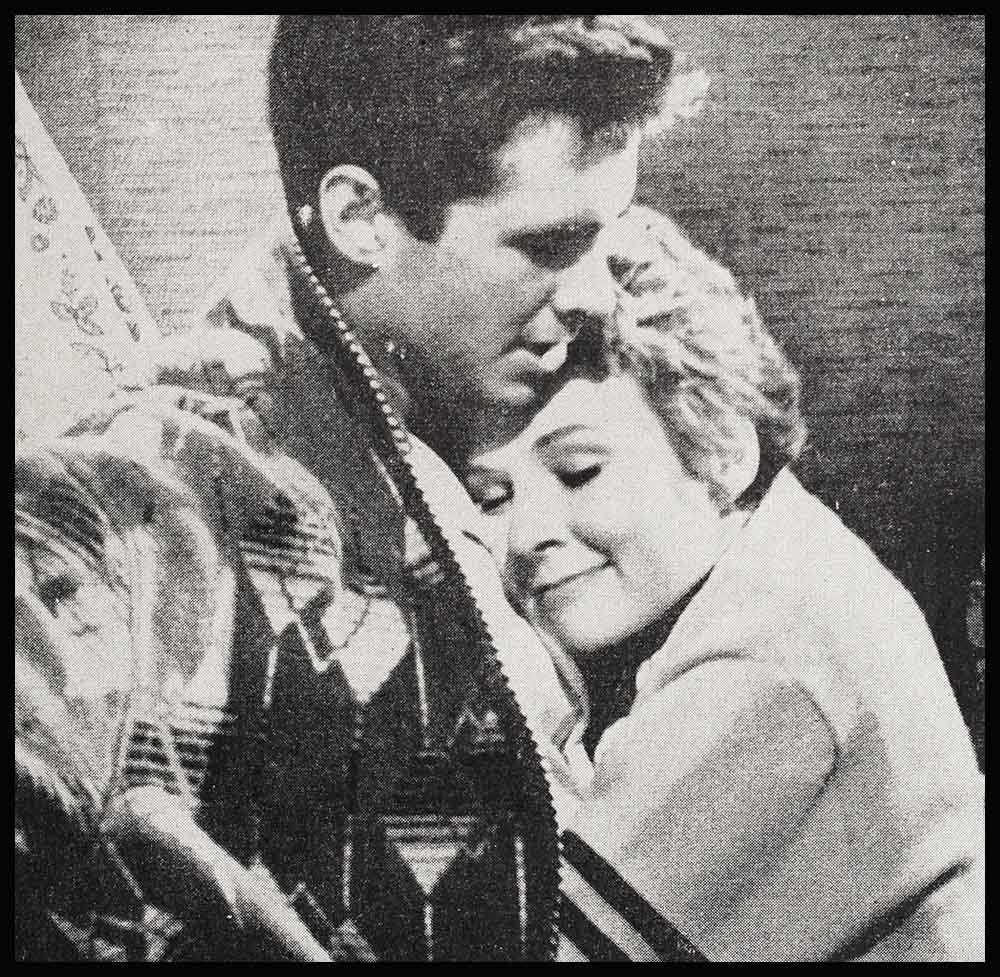 Here is one of the rare tales of high adventure that accents personality over physical action. Casting James Stewart as the young Charles A. Lindbergh seemed doubtful, but the result is a triumph. Though close-ups reveal that Jimmy is not twenty-five, his acting creates the illusion of youth and re-creates one of history’s great individual exploits. Almost thirty years ago, Lindbergh made his solo transatlantic flight, in a plane that now looks like a frail silver toy. With his performance, Jimmy shows why that flight captured the imagination of the world and rushed it toward the air age. Flashbacks give amusing glimpses of early aviation, but the focus is on one man, facing death alone. Family

Simple yet intense, this searching look into a troubled soul places Anthony Perkins in the forefront of young actors. He plays an actual person, Jim Piersall of the Boston Red Sox. But this isn’t a baseball story; it centers on family relationships. As Jim, Tony has been under pressure from boyhood. His is a poor family; his mother, portrayed by Perry Wilson as a wistful wraith of a woman, has a history of emotional disturbance. In the capable hands of Karl Malden, his father becomes an exasperating, pathetic figure. Frustrated in his own baseball ambitions, Karl drives and drives the boy, eventually to the point of crack-up. Not a glamour type, quietly appealing, Norma Moore is Tony’s wife. Family

A lively marital farce presents Lauren Bacall and Gregory Peck as a decorative, spirited pair, truly in love but battling a mad variety of problems. New Yorkers both, they meet and marry in California, return to find they’re of two different worlds. Greg’s a sports writer, ill at ease in designer Lauren’s snazzy apartment, astonished at her wacky friends of the fashion and theatre fields. She’s equally appalled at his poker-playing cronies, even more at a punchy ex-fighter hilariously done by Mickey Shaughnessy. Greg’s voluptuous former girlfriend, the dashing Dolores Cray, sets up more obstacles. The pay-off comes when Greg’s columns denouncing a racketeer bring gangland vengeance down on him. It’s breezy fun, with an occasional bit of singing and stepping. Family

Latest in the long series of Astaire partners, Audrey Hepburn teams charmingly with Fred in a light, imaginative tune-film about high-fashion high-jinks. As editor of an ultra ultra fashion magazine, expert comedienne Kay Thompson looking for a new model to show off a Paris collection. It photographer Fred who discovers the girl, in the seeming hopeless guise of Audrey, a severely intellectual type whose clothes tastes run to black cotton stockings and sensible shoes Audrey agrees to the Paris trip only because she’s eager meet a certain philosopher there. So we have a combine fashion show, Cinderella story (Fred as her prince) and travelogue, with Audrey proving adept at comedy dances, well as the dreamy ballroom sort. Family

Affable, easygoing, the first Martin-minus-Lewis film casts Dean as heir to an International hotel chain (thus explaining the title). In Rome to take over a new property, he steps out with Eva Bartok, but quickly falls victim to the campaign put on by her kid sister, Anna Maria Alberghetti. There’s a hitch in Dean’s marriage plans: His fiancee’s musician father (Walter Slezak, most assured member of the cast) won’t let Anna Maria marry until Eva and the other older sisters (Lisa Montell, Lisa Gaye) have found husbands. Desperately, Dean makes himself a one-man matrimonial agency. And he has a rival for Anna Maria in flyer Dewey Martin. The idea is tricky; songs and backgrounds are pleasing; but a faster pace would have upped the laugh and entertainment content. Family

As the James brothers ride again, in the handsome persons of Robert Wagner and Jeffrey Hunter, the film’s write get off the historical hook by practically admitting they’ve looked more to legend than fact. The picture opens with the hold-up that turned the gang’s luck into disaster, then flashed back to show how Missouri farm boys became dreaded bandit Though Bob’s manner as Jesse is a little too boyish, he doe manage to show his character change. The first robbery planned to get money for farming in hungry days after the Civil War. Jeff, as the gentler Frank, and others join in. But Bob finally goes headline-happy. Agnes Moorehead plays the boys’ mother; Hope Lange and Rachel Stevens, companions is the domestic half of their double life. Family

A fascinating study of upper-echelon intrigue in Nazi Germany gives a powerful role to Curt Jurgens, top European star recently corralled by Hollywood. As an air-force general, feeling secure in his position, Jurgens sneers at the Nazis and their Gestapo. But, as a conscientious military man, he must look into test-flight crashes, possibly caused by sabotage. A weary sophisticate, he finds his lost illusions personified in the young charm of Marianne Cook (seen in “Four Girls in Town”). Along with suspense and romance, there’s a revealing cross section of a brutalized, dying society (though its deepest horrors are only hinted at). Ger-man dialogue, English titles. Adult

Science-fiction movies find a refreshing variation on the themes of over-sized monsters and space travels. All the creatures and objects of this neat chiller are familiar—but seen on a terrifyingly altered scale. A good-looking six-footer. happily married to Randy Stuart. Grant Williams suddenly finds that he is shrinking in physical size. Tests show that chance exposure to atomic radiation and Chemicals has had a deadly effect, yet Science can’t help him. Reduced to a child’s height. he finds temporary consolation with a pretty carnival midget—until he begins shrinking again. At last, marooned in his own cellar. he is so tiny that to him sewing thread is heavy rope; a straight pin becomes a spear for defense against a spider. The plot has no subtleties, but set designs and photography are so ingenious that the story is haunting. Family

Kelly and Me (U-I; CINEMA-SCOPE, TECHNICOLOR)

Set in the era when talkies were new and vaudeville appeared doomed. this sentimental comedy casts Van Johnson in the conventional role of swell-headed small-timer. He’s saved from failure when a partner gets into his corny act—the white police dog Kelly, a thoroughly engaging beast. Thanks to Piper Laurie. daughter of movie producer Onslow Stevens, Van and the dog hit the screen in a highly popular series. Of course, Kelly is the real box-office attraction, and Van grows bitterly jealous. Married to Stevens, Martha Hyer gets involved with Van. Though this movie gently kids the typical dog picture. its hero runs true to scene-stealing form. Family

The palatial residence of French royalty becomes the background of a dis-jointed film pageant that employs many top names of the country’s movie industry, along with a couple of Americans. In the passing parade of kings and their mistresses, Sacha Guitry is outstanding as Louis XIV; Claudette Colbert, as Mme. de Montespan. Orson Welles, in makeup that is a total disguise, plays Ben Franklin; Edith Piaf sings a rousing ballad of the Revolution. French dialogue, English titles. Adult

A dual role is any player’s delight, but Eleanor Parker goes this ideal one better. She has a triple role, yet she is actually playing one person. As a drab, nervous employee in a museum, she finds mysterious, threatening notes in her handbag. Joan Blondell, as the boozy, cheerful aunt she lives with, won’t take the notes seriously. But Eleanor eventually follows the advice of neighbor Hugo Haas and consults psychiatrist Richard Boone. He discovers that she has a second, submerged personality, which sometimes takes command. This is Lizzie, a painted, hard-drinking hussy—who writes the threatening notes. With hypnosis, Boone unearths still another personality, the sweet, normal girl Eleanor might have been if childhood tragedy had not deranged her. There have actually been such cases, but the film’s heavy-handed treatment does not make this one plausible. Adult

The psychoanalyst’s couch gets a comic going-over in this agreeable, offhanded farce. As an analyst whose patients have more trouble with their hearts than with their heads, David Niven shows a superhuman detachment and calm—until his own heart gets involved. Tony Randall, doing a superb clowning job, is a young man utterly unnerved by a disastrous love affair—with Barbara Rush, now the doctor’s fiancee. Though she seems too sensible for her flutter-brained role, Barbara contributes charm. So does Ginger Rogers, as a discontented wife who consults Niven because she feels useless in her marriage to movie star Dan Dailey. The problems of the whole quintet become wildly entangled before the happy finale. Adult

Turned out as briskly as most Audie Murphy Westerns, his latest gives him an unusual supporting cast—mostly feminine. A Texan who fought for the Union, he deserts his frontier post when he hears that his home territory is endangered by Indian raids. With the men off at war, only women and children are on hand, and they at first resent their “renegade” rescuer. But Audie finally gets his petticoated command into fighting trim, with Amazonian Hope Emerson as drill sergeant. Among the other gals: Patricia Livingston, his one-time sweetheart; Kathryn Grant, a spunky tomboy who wins his respect (and more). Family

The Strange One (COLUMBIA)

Darkly attractive, forceful in his acting style, Ben Gazzara makes a promising debut in this overdrawn drama of life in a Southern military school. As a suave bully with a grudge against the world, he apparently has the title role. But most of the other characters are mighty peculiar, too: Arthur Storch, a cowardly prig; James Olson, a moronic football player; Pat Hingle, Ben’s stooge. When Gazzara’s hazing results in an innocent cadet’s expulsion, George Peppard (a likable, normal type) urges rebellion. Adult

The beautiful Bergman and a delicate, enchanting use of color make this picture a pleasure to the eye. But the mind and the emotions go unsatisfied. Ingrid plays a Polish princess trying to make her way, with charm but without money, in turn-of the-century Paris. She could marry a rich businessman; she obviously returns the affections of thoughtful Mel Ferrer; but she gets involved with the political career of gallant Jean Marais. A military hero, Jean is being pushed toward dictatorship by a selfish clique. He himself doesn’t want power; he just wants Ingrid. Evidently, this is supposed to be light comedy, but laughs are scarce. Family

A suspenseful but seldom convincing courtroom drama stars Jeff Chandler as a flashy criminal lawyer. After he has successfully defended a wealthy, no-good married couple (Elaine Stewart, Philip Reed) against the charge of killing the wife’s lover, Jeff finds himself on the defensive. Sheriff Jack Carson, who took a fatherly interest in the murdered man, frames the lawyer by persuading juror Gail Russell to swear that she was bribed. In the crisis, Jeanne Crain returns to husband Jeff. At first she is motivated just by loyalty, but the estranged couple draws together under the stresses of Jeff’s trial. Adult