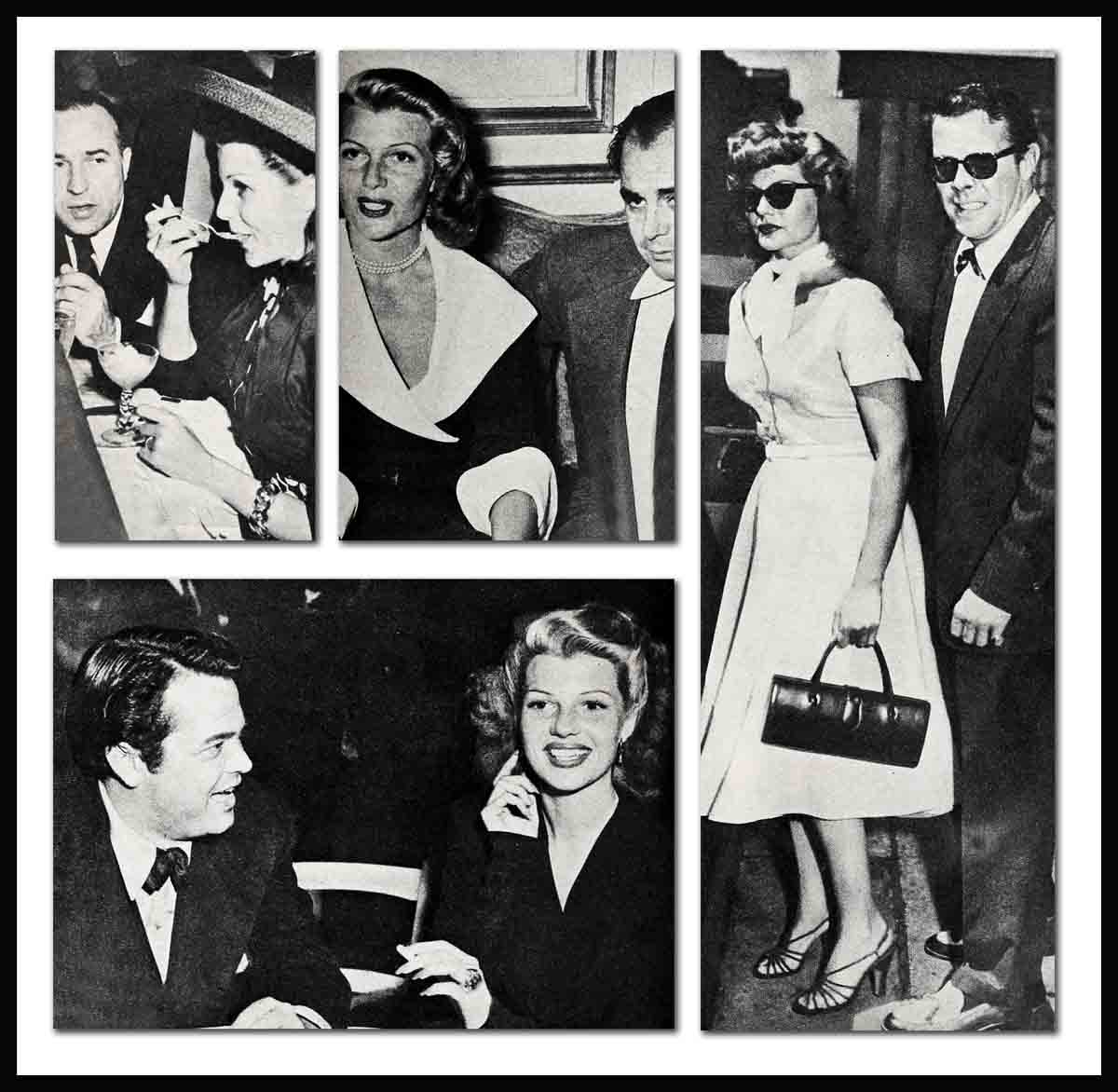 Rita Hayworth is in love again! And when her passionate heart begins turning flipflops nothing else is so important to her as being with the man who’s the cause of it all.

This time it’s Dick Haymes. Dick is still married to Nora Eddington, who gave up dashing Errol Flynn to become Mrs. Haymes. However, Nora tells me her marriage to Dick has been washed up for some time,’so there will be no problem if Rita has the patience to wait until he’s free again.

Hollywood, as usual, is agape with surprise at this new romantic turn. Everybody’s wondering how it happened. How did these two discover each other?

I inquired of Nora, and she assured me she really doesn’t know. “When I left Dick, he was desolate. Maybe Rita caught him on the rebound,” she purred.

Proximity is notoriously Cupid’s closest ally. With Rita .and Dick, proximity played its part when she was starring in “Salome” at Columbia and he was making “Cruising Down the River” there. They met sometimes during the luncheon hour at the Naples restaurant nearby.

Dick was then in the painful process of breaking up with Nora. Rita was being seen at night with handsome young Manuel Rojas, the Argentine polo player, and gossips were busily wagging tongues. But Rita explained it, “There is positively no romance in my life right now. I just like to go out to-dinner once in a while.”

Then came the big night of March 25 at the Stork Club in New York, where a party got under way after the premiere of “Salome.” Dick had been on a personal-appearance tour to promote the picture, “All Ashore.” He wound up in New York just in time to be invited to the premiere and the party. Rita went with a publicity man and Dick staged it. They got together and danced again and again and again. The flickering flame came to warm life when his arms held her close as they glided around the floor. It burned brighter and brighter as the night wore on, and when Dick escorted the tired, happy Rita back to her hotel, she knew he was the guy.

The New York columnists weren’t slow to get hep. They linked the names of Rita and Dick. Harry Cohn, head man at Columbia, snorted in disbelief. He should have known Rita better. He’s been coping with her romances these many years and ought to realize by this time that when she falls for a fellow the fascination is fatal—while it lasts.

Years ago, Cohn had stood looking on when she renounced all for Victor Mature, after dissolving her marriage to Edward Judson. Then, when Vic was off on naval duty in the cold North Atlantic, she transferred her affections to Orson Welles, and this looked like the real McCoy for a while. She tried to change her personality for Orson, snipping off her lovely red tresses and bleaching them to a washed-out blonde shade. She let Orson saw her in two in a silly magic show and went the whole gamut by allowing him to direct her in a picture that laid an egg.

It wasn’t long after she’d sloughed Orson off that Rita’s earth-shaking romance with Aly Khan exploded on two continents. Her career as a film star was tossed away like an old shoe. Harry Cohn stewed in vexation over the loss of the best boxoffice bet Columbia had ever owned. While Rita played on the Riviera, Harry helplessly counted the money they were losing every day she ignored work.

Aly couldn’t slip a plain golden ring on Rita’s slender finger immediately because his then current wife wouldn’t let him, but that minor barrier did not cool their torrid love. Rita had little thought for the tongues that wagged in disapproval. She acted as if she never intended to return to Hollywood and the movie job that had earned her more luxuries than even Prince Aly could give her.

But if Rita’s career proves anything it proves this: She can fall out of love as swiftly and completely as she falls in. And inevitably the day dawned when the cool blue waters of the Mediterranean and the green hills rising from its shores no longer looked as attractive as her own Hollywood. There, a steady weekly paycheck awaited her, certainly a pleasanter prospect than the pile of unpaid bills that she was accumulating as Aly’s Princess.

Love lay dormant in Rita’s heart during the months when she was trying to decide whether or not to divorce Aly. Much dickering over finances went on among lawyers before she finally got her divorce in Nevada. But no one seriously believed that this flaming femme fatale was permanently done with love. That just wasn’t in the cards that life had always dealt her.

And if Harry Cohn hoped for this, even he must have realized that it was a vain hope. He knew it for sure when Rita and Dick Haymes returned to California from New York. They were together constantly but arranged their dates cleverly, avoiding publicized night spots and the prying eye of the professional gossips. They would dine together at the Bel Air Hotel and pass long hours at the Naples where their blaze had started to smoulder.

When Rita finished “Miss Sadie Thompson” at Columbia (and that incidentally is the finest job of acting she has ever done) she decided on a vacation in New York. She boarded the train at Pasadena. Dick was there too, wearing denim slacks and carrying no luggage. Apparently he’d come to kiss her goodbye. He was seen getting on the train. But no one saw him get off.

“Probably Rita had his things along with her own. baggage,” Nora Eddington surmises. She has been watching this romance with mild amusement. “Dick showed up in denims just to throw the press off the track. Not that I have the least hard feelings in the matter. I’m willing to get a divorce if that’ll help them to get married.”

It was almost immediately after Rita and Dick returned from New York that one more snarl appeared in the tangled fabric of their romance. Dick was suddenly faced with the possibility of deportation. An Argentine citizen, he had neglected to clear with the proper authorities when he went to Hawaii to join Rita while she was there on location. Although stories circulated at the time implied that he was being accused of draft evasion, there was no foundation in fact for these. He had attempted to enlist in the US Army, he said, and was rejected because of hypertension.

This development, while it cast a shadow over the romance, in no way deterred it. Nora, at that time, said she was quite sure that Dick and Rita were eager to marry as soon as possible. Dick, Nora said, was urging her to get a quick Alabama divorce to make that possible. But her lawyer had advised against it.

Nora’s plan when I talked with her was to obtain her divorce in Nevada, contingent upon settling her money matters with Flynn. And to Rita and Dick openly dating in New York, even staying at the same hotel (though separated by several floors), this must seem desirable.

A Nevada divorce would of course clear the way for Dick to marry Rita before he goes abroad. If Nora should sue in California they would be required to wait a year before they could be legally married. And if I know Rita she’ll be Mrs. Dick Haymes long before that.