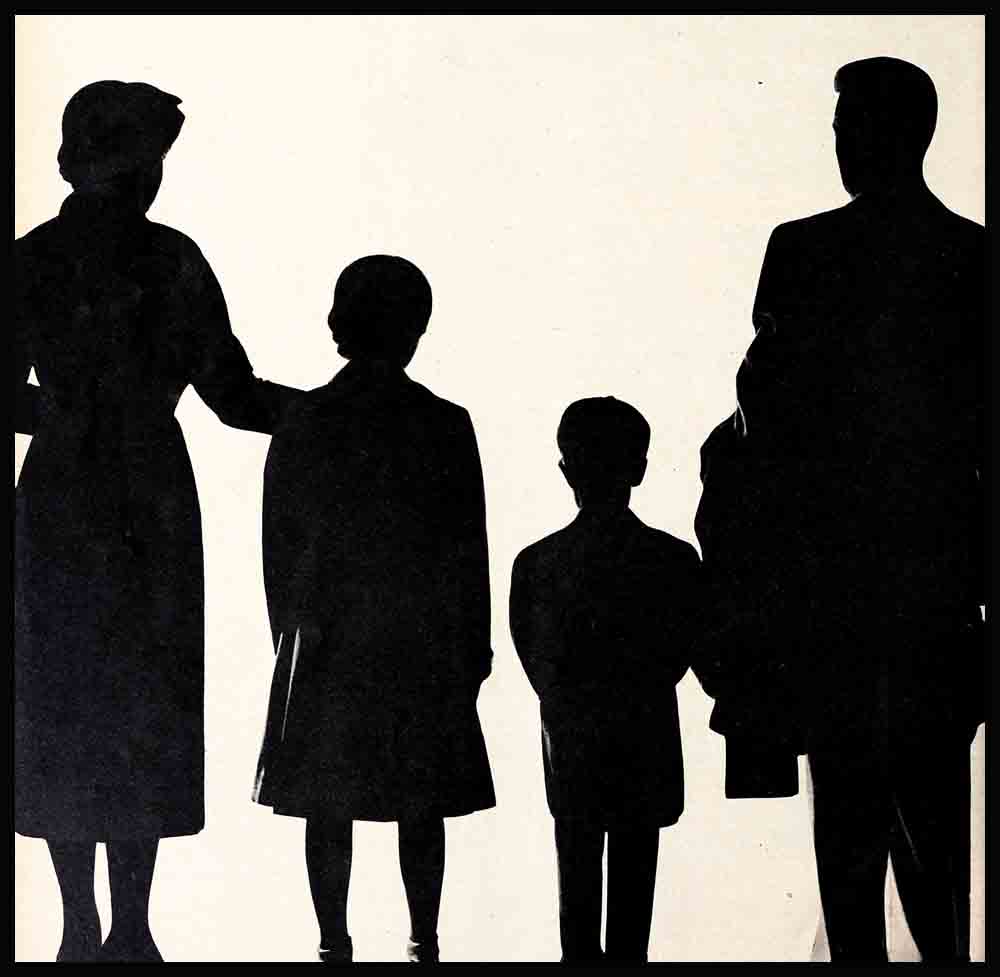 “I always thought that English was the language I spoke,” said Sue Ladd. “But I’m finding out how wrong I was. English is English and American is American—and it’s amazing how different the two can be!” She was sitting in front of the fireplace in the drawing room of Highclere, the Victorian mansion she and Alan are renting during their stay in England. “The words may sound the same. But that doesn’t hold true for the meanings.”

Alan himself was at nearby Shepperton Studios, filming “Red Beret,” story of Britain’s paratroopers, and Lonnie and David, their two youngsters, were sightseeing in London with their tutor, Miss Martin. Sue kept a watchful eye on the clock for her husband’s expected return.

“Alan and I were in England once before—for a Royal Command Performance—but only for a few days and we stayed at a London hotel. This time, with the children along, we’ve set up regular housekeeping and I’m learning what it’s like to be a housewife and mother under British conditions.

“First day shopping,” Sue reminisced with a smile, “I really got myself tied in knots. We needed a hammer and some nails so we drove into the village and I asked where the hardware store was. All I got was a blank look. It took me five minutes to find out what I wanted was an iron-monger’s!

“The vegetable store became the greengrocer’s, the drug store, the chemist shop, and no ice cream sodas either.

“It couldn’t be working out better, though,” Sue said, as she walked from the cosy warmth of the drawing-room fire into the draughty corridor so much a part of English homes. “We decided not to take a flat—there’s another word, ‘flat’ instead of apartment—in London because the kids are used to space. Of course, we miss our home in Holmby Hills,” she admitted, referring to their exquisite eleven-room French provincial home located in one of California’s most beautiful sections. “But we were really lucky to find a house big enough for all of us, and close to Alan’s studio. Also, very important—to Americans used to such conveniences—this house has a good, modern refrigerator.”

Their British kitchen is old-fashioned and sprawling; the gleaming refrigerator stands out like a shiny beacon against the somberness of a coal-burning stove, wooden sinks and a cold-storage room like grandma used to have. Beyond is the large, barren room with desks, chairs and a piano which serves as a school room for the children. To safeguard their education, Sue asked Jean Martin, Lonnie’s former second-grade teacher, to accompany them abroad. Here, she conducts classes for the children two times each day.

The sound of two auto horns announced the simultaneous arrival of Alan from the studio and Lonnie and David with Miss Martin. Alan sat alongside the driver in the beige Cadillac he brought from the States, making faces through the window at the car behind, where the children jiggled the door handle, impatiently waiting to spring out. They rode in the bright blue Jaguar sedan Alan and Sue bought shortly after arrival. It’s exactly the same model as Michael Wilding’s and the kids adore it.

“Tea’s ready,” announced Mary Thompson, the maid, from the front doorway Lonnie yelled “Come on, David!” as the two youngsters raced in to be first at the cucumber sandwiches.

“I’m going to shoot a few holes of golf before dinner, dear,” Alan said, going up to change. “The weather’s so good it’d be a shame to miss it.”

“This living in the middle of a golf course,” says Sue, “is spoiling Alan. On a morning when he has a late call, he can roll out of bed, eat his kippers and cornflakes and be at the First tee in about five minutes.”

But Alan managed time for far more than golf when he wasn’t working in “Red Beret.” He has made himself one of the most effective ambassadors Hollywood has ever sent abroad.

Alan arrived in England during the height of the period of British Equity hostility against having Americans play roles which might well be filled by British actors. But he won both the public and the press over to his side at once. So popular did he become personally that the entire squad of airborne commandos who had been recruited to work in “Red Beret” named him an honorary member of their regiment; a group of four hundred young. British fans gave a huge tea in his honor and newspapers tagged him as “One on America’s best exports to this Isle.”

Sue is radiant about this British sojourn “We’ve been wanting to take the kids abroad for so long,” she said, “but the cos would have been too great if Alan weren’t working here.

“When he decided on the script of ‘Red Beret’ I had only five weeks to get the whole family ready. There was never any question of leaving the children behind. We’re too close a family to be apart. Why if one of us isn’t home for dinner it seems like a pall’s over the whole house. Alan and I so seldom go out it’s reached a point now where the little ones are quite insulted when we do. Six thousand miles between us! We’d all be too unhappy.

“Lonnie, my baby girl, wanted to take the whole house with her when we came. She settled for three dolls and her complete set of Nancy Drew mysteries. At the last minute, she was given a doll’s trunk so she stencilled L-A-D-D on it and carted it along. Having their own possession, makes them feel more at home.

“David was really the funny one. He insisted on bringing his tricycle, his Teddy bear and a pair of Alan Ladd guns. Somehow he also got the idea he could fish of the side of the Ile de France but we talked him out of his fishing rod.”

Alan strode in with his clubs just as the children finished their tea. “What did you see today?” he asked them.

“And she has a little boy, too,” David cu in, “And his name is Charles. The policeman asked me my name and he said the Queen’s uncle has the very same one . . .

“And we saw the changing of the guards and ate lunch in Fleet Street and went to the zoo in Regent’s Park,” he summed up with shining eyes.

“See what I mean about education?” asked an approving Alan. “When I was a child we were too poor for me to travel anywhere. That’s why I’m so strong on first-hand learning. With Miss Martin to guide them, this trip will do more good than a library full of books.”

Highclere stands on a slight rise, giving a clear, high view of the surrounding fields, shade trees and hedgerows. And here the Ladds expect to remain through March and possibly April before taking a Continental holiday. They haven’t decided on a vacation spot yet. The whole family likes the sun, and after an English winter they’ll need it, especially Alan, who begins work soon on his next picture, “White South.” Sue has been Consulting travel folders comparing the French Riviera to Majorca or Capri.

“Above all, Alan enjoys informality. He wants to wear those loud shirts he brought home from our Hawaiian trip last year. Wherever we go we’ll take a villa.”

Alan assuredly deserves a rest. With all his quiet good humor and affectionate attitude toward his family, signs of fatigue can be detected on his face. After all, in eleven years since he first found fame in “This Gun for Hire” he has made twenty-six pictures, each a roaring box-office hit. The infant born Alan Walbridge Ladd thirty-nine years ago in Hot Springs, Arkansas, has come a long way since his poverty-stricken family moved to California in 1921.

Warner Brothers gave him his first full-time job as a “grip”—“the guy who does anything nobody else will risk.” Acting appealed to him more than breaking his neck stringing lights on the ceiling, so he studied hard, drifting finally into radio.

When agent Sue Carol heard him she convinced him to try for the movies. Producers refused to take a chance because they considered his five feet, nine inches too short and they weren’t interested in blond actors.

Since the part of Raven in “This Gun for Hire,” catapulted him into the top box-office spot, his popularity has never waned. Before “Red Beret,” he completed “The Iron Mistress” and “Desert Legion,” which are now being shown.

Through it all, Sue Carol Ladd has been wife, mother to their two children, adviser and friend. His conversation always returns to her. “You can ask Susie if I’m right,” he’ll say. “Am I right, Sue?”

After dinner that night, Miss Martin took David and Lonnie up to change for bed. A short while later there was a delighted squeal. Lonnie came rushing to the head of the stairs.

And there stood the nine-year-old Lonnie Ladd in her woolly nightshirt, excited beyond words because she had curlers in her soft blonde hair for the very first time.

Alan and Sue looked at each other tenderly. “Our baby’s growing up,” Alan said.

She stirred up the fire, her eyes misting a little. The glowing coals were symbolic—a symbol of the fact that the Ladds manage to create warmth and a real family oneness wherever they are—their greatest success story of all.