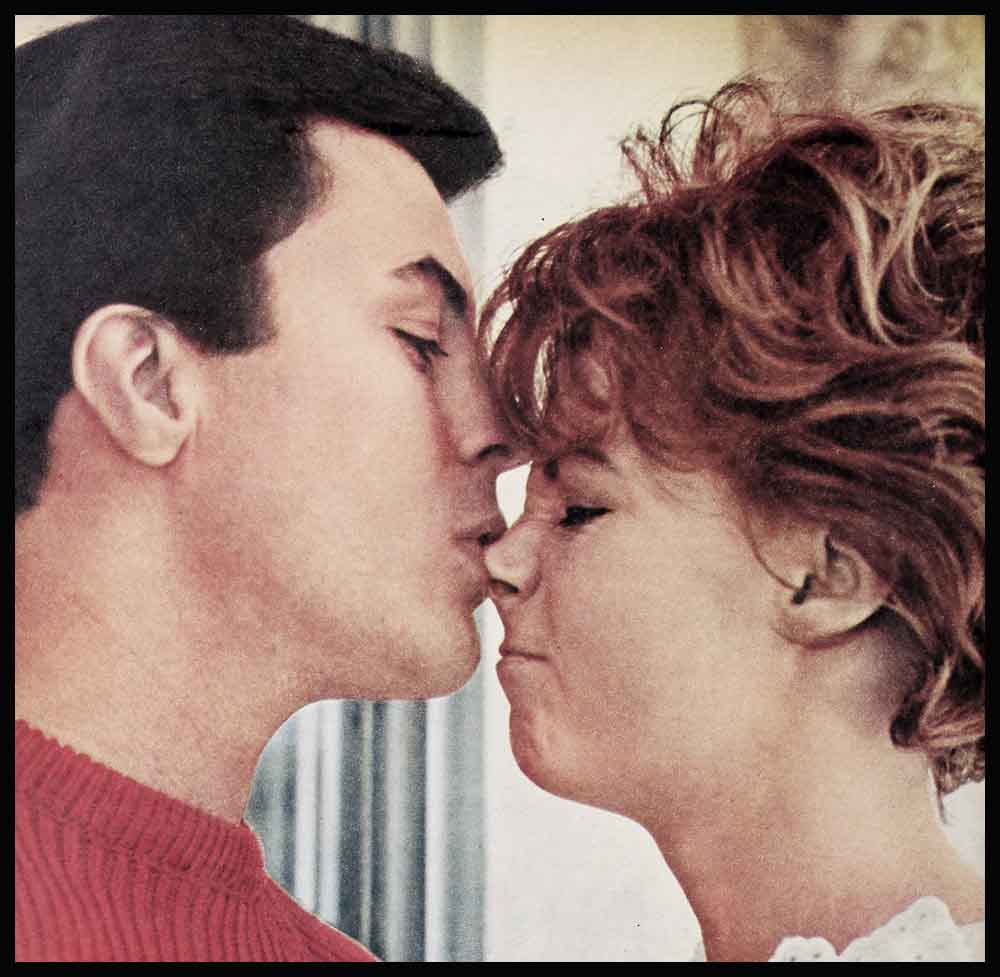 Jimmy Darren: “Evy Have I Lost A Son?”

“Goodbye!” he shouted. The car picked up speed. The little boy chased it all the way down the block. “Goodbye,” he cried. “Goodbye. Daddy. Goodbye!” . . . Jimmy Darren drove on. That high, wistful little voice rang in his ears all the way home.

He still heard it as he turned the key in his apartment door. . . . His wife came running out of the kitchen.

—even though he was wondering if I really would let him out. This time he must have seen how disappointed I was. He kept asking me if I still loved him, he kept wanting me to kiss him. Evy . . . have I lost him?”

“Of course not,” she said gently. “All that was to show you that he loves you.”

“Yes,” Jimmy said. “He loves me, and so he feels guilty because on a sunny Saturday he wants to play with another child instead of spending the day with me. He loves me and I love him, and so, at five years old, my son has to start feeling guilty. He looked so sad. I can’t take it! The poor kid.”

Evy nodded. “And poor you,” she said. “Next time, you tell him, ‘The heck with Joey, I’m your father. I only have one day a week with you, and you’re coming with me!’” She looked at her husband. “Now you go wash your hands and we’ll have lunch, Darling,” she said. “It’s all ready.”

He nodded. He left the room. But he didn’t go down the hail to the bathroom. Instead he opened a partly closed door and walked into a quiet, sunny room. There, in a crib, slept his other son—Christian, his second-born, the child of his second marriage. At the sound of footsteps the sleeping baby awoke. He saw his father’s face and cooed with delight, holding out his arms to be picked up. The man swung him out of the crib and held him tight.

God, he thought, let this child at least always smile for me. Let me be able to make the world safe and happy for him. Let him never be afraid. Holding Christian in his arms, he went to his lunch.

It hasn’t been easy for Jimmy Darren to see his two sons growing up in different homes. But then, he never expected that it would be. Several years ago, when he and Gloria were slowly coming toward divorce, Jimmy had cried out in anguish: “I know my marriage is over—but what if my wife gets married again? How will I stand it if my son calls some other man ‘Daddy’?”

All too soon he learned that he would have to bear just that. It began with an unexpected bad break. Just after Jimmy and Gloria were divorced, Jimmy s studio ordered him to Europe to film an important picture. They told him he would have to be gone at least six months—six work-filled months.

Up until that time Jimmy and Gloria had tried to protect Little Jimmy from the fail force of their split. During the first days of their separation, Jimmy had gone home every morning in order to be there when his son woke up. Later, to accustom the two-year-old to being without his father, Gloria had taken him east for a long visit with her family.

But he knew that even if Gloria reminded Little Jimmy about his father every day that he was in Europe, showed him his picture, read him his letters, “Daddy” would soon become a meaningless word. And it wasn’t even likely that Gloria would be doing that. She would be trying to forget, not remember. She would want to build a new life for herself, not live in the ashes of an old, discarded one. And this was easily understandable. Gloria would remarry and her life would go on. And Little Jimmy would have a brand new daddy.

It was a dismal situation, but Jimmy tried to look at the bright side. The new movie would be good for his career, and Europe would be a wonderful place for a honeymoon. He was engaged to Evy Norlund then, and decided to marry her in New York before leaving. That way they could go together and he would be able to meet her family in Denmark.

He knew that she was thrilled about their plans, and he didn’t want to spoil her pleasure . . . but he had to talk to her. He had to tell her what was troubling him so deeply. He had to explain about his son.

“He will, Jimmy,” Evy said. “Even though a child forgets, a little memory always remains. It will awaken when you return. He will still be your son.” She smiled at him sadly. “And Jimmy, there is nothing you can do about it. You have to make the picture.”

He went, of course, and Evy went with him. When he got there, he worked hard. He spent his free time with Evy and her family. He became very sure of his future with her. They made plans for their return to the United States. But even in the excitement of planning a new life, he did not forget his son. At toy Stores in a dozen cities he carefully chose gifts, reminding himself each time that Little Jimmy was growing older and maybe lonelier month by month. The toys would bring him joy.

Finally it was over. He had been away not for six months but for nine months. When his plane landed in New York, the first thing he did was find a telephone booth and break a ten dollar bill into a vast assortment of quarters and nickels and dimes. He placed a person-to-person call to Jimmy Darren, Jr. in Los Angeles.

There was silence at the other end. “Jimmy?” he said. “Jimmy, can you hear me? This is your daddy.”

“Who?” the little boy said.

“Daddy.” Jimmy repeated patiently, making his voice as loud and clear as possible. “This is your daddy.”

Jimmy laughed. It was a game, obviously. He turned to smile at Evy’s anxious face, watching him through the glass door. “Daddy-Jimmy,” he said, playing along with the game.

There was a long silence. Then Jimmy Darren heard his son’s voice, raised in bewilderment, speaking to his mother. “Hey, Mommy,” Little Jimmy demanded. “Do I have another daddy?”

In the hot, cramped phone booth Jimmy Darren’s heart missed a beat. Another daddy. As clearly as if he had spoken them aloud, he heard the words from the past: “. . . how will I stand it if my son calls some other man Daddy? . . .”

Stop it, he told himself sternly. You should have expected it. You knew Gloria was getting married. He leaned his head against the glass. He told himself to grow up. He told himself to be glad for his son’s sake that instead of grieving over an absent father, the child had found comfort in a new one. He tried to calm himself, but when he emerged from the booth, he couldn’t keep his voice from trembling, his hands from shaking.

But happily, when he returned to California, his reunion with Little Jimmy was a success, the child now manfully boasting that he did, too, remember Daddy Jimmy. But there were so many ways in which Gloria’s new husband, Barry, had replaced him as a father.

There was the day the two Jimmies went walking together and Little Jimmy pointed to a cross-topped building and remarked, “That’s a church.”

“Yes, it is,” Jimmy agreed. Then he took the opportunity to ask the question that had been bothering him for weeks. “Jimmy . . . do you ever go to church?”

He wasn’t sure what answer he was expecting. But he couldn’t help being startled when he heard his son say, “No. I go to temple with Daddy-Barry on Saturdays sometimes.”

Talking it over with Evy later, Jimmy said, “It isn’t that I mind. As long as he has some faith, some religion, I don’t mind that it’s Jewish instead of Catholic. After all, Gloria is Jewish and so is Barry, and so it’s natural—it’s probably better—that Little Jimmy is brought up in their faith. But . . .”

“But what, darling?” Evy prompted.

Jimmy sighed. “I just wish I’d been consulted about it, that’s all.”

When Evy gave birth to Christian, Jimmy was jubilant. And, happily, Little Jimmy’s reaction to his new half-brother didn’t pose a problem. From the first time he was brought over to see Christian, he was fascinated with him. Before the baby could hold a toy, Little Jimmy had brought him a dozen of his own. As soon as the baby could sit up, he spent delighted hours rolling balls toward him, retrieving the ones Christian missed and starting all over again. For some reason, he never tired of this game.

“You see,” Evy told Jimmy, “in some ways it is good that Little Jimmy does not live with you. He is not jealous; he doesn’t feel that Christian is a threat to him.”

That set his mind somewhat at ease about Little Jimmy. But what about Christian? Christian must never go through what Little Jimmy suffered—he must never feel deserted. Jimmy felt so strongly about this, he had trouble letting the baby out of his sight even for a few hours to go to the studio . . . to go for a drive . . . even to go to the store.

When Christian was three months old, Jimmy had to go east on a business trip. Even though their friends and doctors assured them that Christian wouldn’t even notice they were gone if he were left in competent hands, Jimmy couldn’t do it. Instead, he and Evy bundled Christian onto a cross-country train. For two days and three nights they huddled in a compartment with him, struggling to get bottles warmed and food prepared, nervously tucking him into a berth at night; spending a three-hour stopover in a Chicago hotel room. They finally arrived at their destination exhausted.

“But if we had left him and he didn’t know me when we got back,” Jimmy said, “like Little Jimmy. . . .” And Evy, understanding, nodded her head.

Then, gradually, Jimmy began to relax. It became easier for him to accept the realities of his very complex relationships with both his children—both his loves.

One day he delightedly discovered that Little Jimmy had amassed a complete collection of his recordings and played them at home on his junior-sized jukebox. “You see,” Evy told him, “even when you’re not with him, he thinks of you—and hears your voice.”

Today there are still problems for Jimmy Darren. Doubtless there always will be. He will probably always feel the bitter-sweetness of joy and sorrow when he hears Little Jimmy telling a total stranger that he is “So lucky to have two daddies.”

But he no longer feels the need to ask constantly, “Evy, have I lost a son?” He knows now that human relationships do not necessarily depend on the number of hours spent together. And he knows that he need not struggle to hold his first-born son, because the tie that binds them cannot be broken. It adapts to all situations, changing and changeless.

Jimmy’s next picture will be “Gidget Goes Parisian,” for Columbia Pictures.