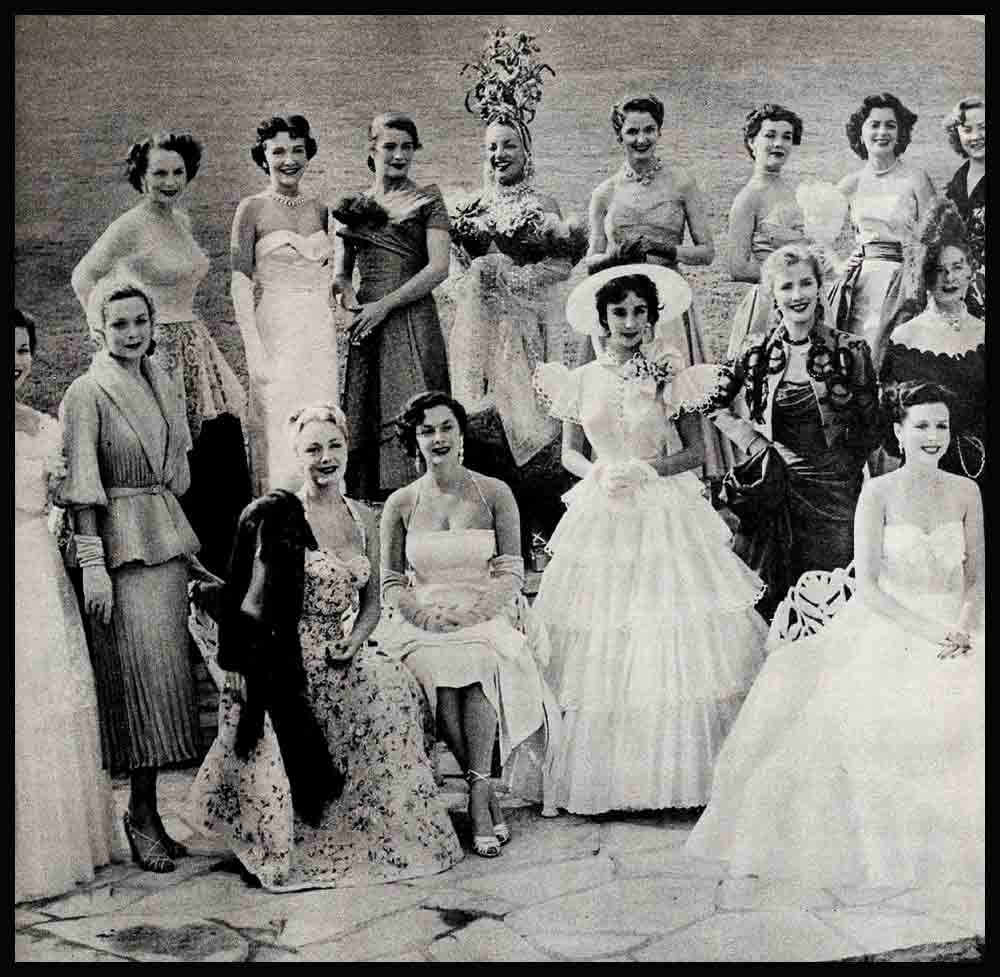 What a month it has been for parties. You couldn’t get an appointment at any of the leading beauty shops. Dressmakers took on extra seamstresses. The studio designers, who had dolls as well as girls to dress for one of the shindigs, were only a little short of being frantic.

Hollywood lived up to its name. It was one hundred per cent the fun-loving, partying town it so often is pictured. It also, if I’m to tell the whole truth, was Hollywood at its very best—going all out to support its favorite charities. And if you think the Hollywood girls are competitive about their star status, their appearance and their gentlemen—well, you should see them when they’re running parties, for charity, especially.

At a cocktail party Betty Hutton cornered Sue Ladd. “Do you have your Whoop De Do tickets?” she asked.

“No,” said Sue, “Alan and I . . .” But she got no further. Betty opened her bag and dropped two tickets into Sue’s hand. Then, dipping into her bag again, she told Sue, “I have a better idea. You and Alan bring your own crowd, pay off some obligations. Here’s eight more—tell Alan he owes me one hundred and twenty-five dollars.”

Sue took the tickets. A gleam came into her eyes. Opening her bag she counted out ten tickets and pressed them upon Betty. “They’re for the County Fair we’re having out at our ranch for the Crutcher Chapter for Crippled Children. It’s just before your Whoop De Do. Just mail your check.”

The next night at Ciro’s there was a fine to-do. Everybody saw them, both of them supposedly happily married to someone else—standing close, her arm on his shoulder, whispering, and she supposed to be his wife’s best friend. They stood in the shadows, but as cars drove in they were headlighted momentarily.

At first people pretended not to notice. But after a while, after they got inside, they began talking . . . talking . . . talking. . . . Their talk continued, too, for days—until the man’s wife, all innocence, laughingly told how she and the star who had been seen with the husband, had ganged up on the poor man, planned for the star to corner him outside Ciro’s and tell him a sob story that would touch him so much that he would agree ) to be a Whoop De Do auctioneer—which he previously had downright refused to be.

They stop at nothing, these stars, for the success of their party. In no other community but “that horrible, horrible Hollywood” do I know women with difficult, taxing jobs and homes, husbands and children, who work so untiringly for charity.

No wonder their parties net such fabulous sums of money. The County Fair set up at the Ladd ranch raised $15,000 to help blue babies—so it was worth the work that went into it. Professional divers and swimmers staged an aquatic show in the pool. There was an enormous platform for square dancing. A cowboy quartet and dancers performed on an adjoining hillside. There were games of chance. And Bill Demarest emceed a show in which Dorothy Lamour and Burns and Allen, among others, were starred.

Not much appeared about this in the papers except for a story about a couple who attended the party and were later arrested for drunken driving. “Ladd Party Guests Arrested” the headlines ran.

The Chuck Wagon Whoop De Do at the Beverly Hills Hotel, co-hostessed by Betty Hutton and Esther Williams, put over $30,000 in the building fund of the Nursery School for Visually Handicapped Children.

Jane Wyman got $950—from Mike Romanoff—for her doll, dressed in pale pink mousseline de soie with a lavender sash.

“That’s okay,” Red Skelton, one of the auctioneers, told Mike. “You’ll make that back, easily, on three steaks.”

Marie McDonald sold a single package of cigarettes for $500. Ann Blyth, Arlene Dahl, Nancy Davis, Mona Freeman, Betty Garrett, Janet Leigh, Ann Miller, Donna Reed and Ruth Warrick, as cigarette girls, did all right too But they had to bow to Marie as a super saleswoman.

Betty Hutton spent the evening doing at least two dozen things at once. She even worked the spotlight. She sparked the party, really. No wonder she was hoarse the next day. She well might have been exhausted too. So might Esther Williams. For both these girls and all those associated with them worked long and hard to make this party as fabulous as it turned out to be.

The formal Crystal Room at the Beverly Hills Hotel was transformed by the Paramount Studios, inspired by Betty, into a proper setting for square dancing and western hijinks. M-G-M, inspired by Esther, contributed the Chuck Wagon and the big straw figures of Esther and Betty.

The prizes for the waltz, square dance and Charleston contests were donated by the hotel and the Brown Derbies, among others. The tobacco companies supplied the cigarettes. And Henri Sadacca of the Noma Company donated the electronic dolls, dressed by the stars and their designers, which talk, laugh and sing.

Leave it to Betty and Esther to see that no expenses ate into the take.

It takes a bit of doing, as I know well, to organize a party as big and pretentious as this and to see it through to the last infinitesimal detail. Not only does it take doing on the day of the party, but for weeks beforehand.

Elizabeth Taylor was there too, with the doll Helen Rose had dressed in replica of Elizabeth’s wedding dress in “Father of the Bride.” Liz’s doll, which opened the auction, was bought by Mrs. Leonard Firestone. This, in spite of the fact that Nick Hilton, Elizabeth’s husband, sentimentally determined to have this doll, had put up his check for $5,000 which, in the confusion, was forgotten.

Speaking of the Firestones, Red Skelton —trying to raise a bid of $1,900 for the Betty Hutton doll, dressed as Betty was dressed for the “Oh, Them Dudes” number in “Let’s Dance,” to $2,000—offered to stand on his ear for the higher bid. He got it, promptly, from Leonard Firestone. And he made good. Whereupon, Betty tried to stand on her ear, too. Only she fell down.

The Community Chest tea and fashion show followed the Whoop De Do party by only a few days. Mrs. Anthony Micheli, head chairman of this event, is unstinting in her praise of the way the members of the film colony worked.

The admission to this little affair at the home of the millionaire hotel man, Arnold Kirkeby, was trifling—only one hundred dollars. So the cream of the movie industry and Los Angeles society was there.

Among the committee members were many familiar names; Rosalind Russell, Mrs. Nelson Eddy, Ida R. Koverman, Ann Rutherford May, Doris Kenyon Mlynarski, Claire Windsor, Mary Pickford. Mary an honorary committee member, worked ten times harder than an honorary member of anything is supposed to work. But Mary Pickford, bless her, never has assumed that an “Honorary” before your name was meant to let you off anything.

The Kirkeby home boasts an elevator which runs from the second floor to the subterranean pool. This the younger stars took turns running, calling out the floors . . .

Assisting at the tea tables with Mrs Kirkeby were Claudette Colbert, Irene I Dunne, Joan Fontaine. Eleanor Powell, Esther Williams, June Allyson and Jeanette MacDonald. Jeanette, about to embark upon a concert tour which took her, tor the first time, to Carnegie Hall in New York, had a schedule jammed with singing lessons, practice and fittings. But it never occurred to her to use this as an excuse to be let off anything.

Eve Arden, commentator of the show, was a great success. But she never seemed to know it—so inordinately proud was she of her small daughter, Liza Bergen, who, with Carla Kirkeby, opened the show by scattering tiny red feathers down the long runway in the garden.

However, lest you get the idea that the stars are all efficiency, I will tell you that just before Elizabeth Taylor was to go out to model the Helen Rose dress of white organdy she discovered a run in her stocking. She couldn’t sit down—the dress would wrinkle. And there wasn’t time to take it off. So Phyllis Kirk and Audrey Totter held Elizabeth’s dress high over her head while she shed her damaged stocking and donned another.

Practically all of the girls who modelled left some of their belongings behind. Mrs. Kirkeby was weeks discovering who belonged to what, including shoes, articles of lingerie, jewelry and purses.

However, this party, by which the Hollywood Community Chest is almost $8,000 richer, also was a great success.

That, if you ask me, is stupid nonsense.