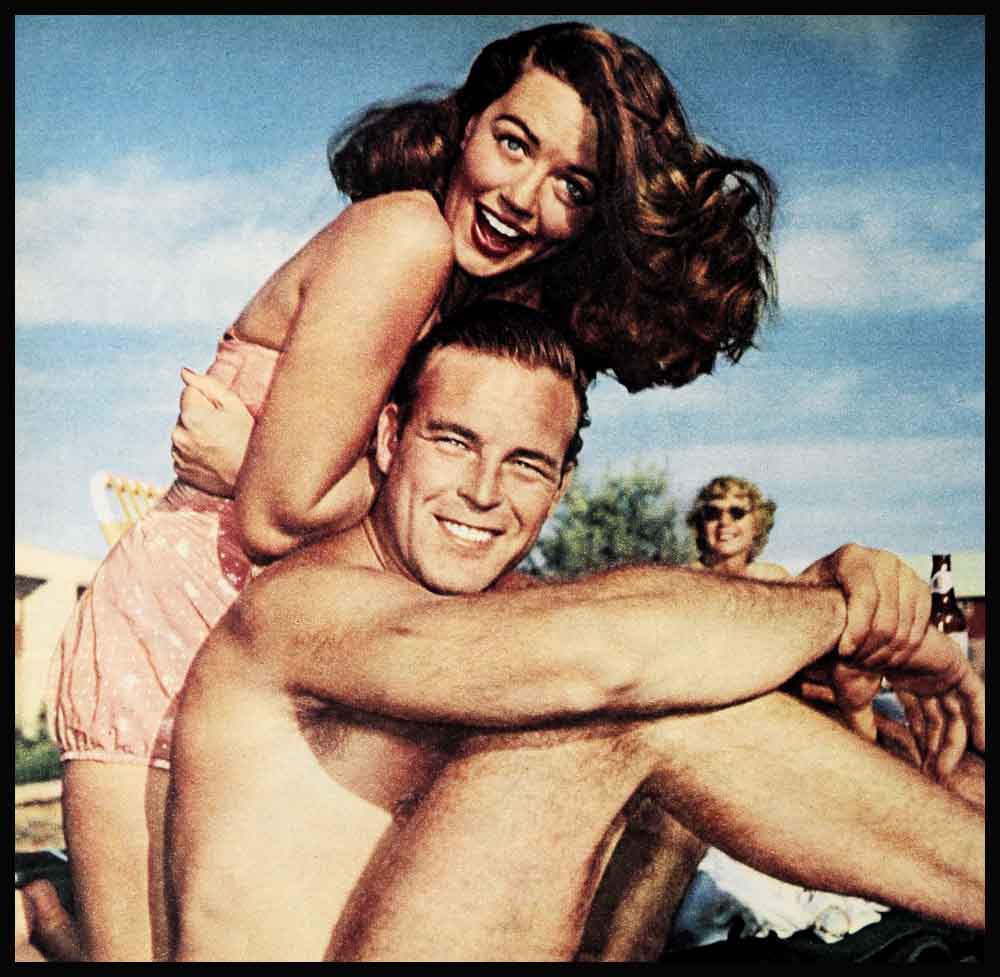 GENIAL GENTS: It’s Bob Hope’s crack after returning to Hollywood from making that smash hit in London’s Palladium: “I just got back from England and your money sends regards to everyone!” . . . According to Red Skelton: “If the John Hodiaks have another baby, Anne Baxter (who now smokes ’em!) will pass out the cigars” . . . It’s Jack Benny’s definition of the most practical man in the world: “A guy who would throw away a Marilyn Monroe calendar—because it was no longer up-to-date!” . . . Clifton Webb said it to Barbara Stanwyck when they were trying to think up a title for their new picture. It concerns the sinking of the Titanic, only the names can’t be used. Cliffy boy suggested: “Bottoms Up!”

TWO’S IN THE NEWS: Best of all, Piper Laurie likes to travel and go to the movies. And best of all, if those dates are serious, she’ll be doing some of same with David Schine, son of the hotel-and-chain-theatre owner . . . They may have quarreled and m ay be it was just that the spaghetti was good, but Joyce Holden and Dok Stamford in a dark corner at the Villa Nova never looked happier . . . Following a five-year absence, Helmut Dantine’s back. Vera-Ellen’s got him—at least for dating purposes. The provocative Austrian says he’s a little older and a great deal wiser (we don’t know what that means, either!) . . . Ann Blyth’s a bright star. Palmer Lee is newest and handsomest of U-I’s leading men. Put them both together, which they are these days, and what do you have? A publicity romance . . . Unpredictable Jane Wyman’s marriage to her orchestra leader Freddie Karger really rocked Hollywood. One week previous the evasive Jane was redecorating her home and the masculine touch was conspicuously missing. And everyone is just as pleased as can be over this union.

IT’S MERELY MONEY: When she was at Warner Brothers, Joan Crawford received $250,000 per picture. Eventually they came to the parting of the ways. A settlement was made because, “Crawford’s name no longer draws at the box office.” Believing poor scripts can kill any star, Joan went out and set up a terrific independent deal for herself. By the time the now sensational “Sudden Fear” completes its run, Joan’s percentage alone will net her around $800,000. Needless to say, every studio in town is trying to get La Crawford under contract again.

ACCORDING TO CAL: When you meet her in person, the soft and soothing tones of Lori Nelson’s voice make her sound just like Ava Gardner . . . People were saying Scott Brady made a mistake in turning down that role at U-I and washing up his contract there, but Scott says ’tain’t no mistake. He has a picture coming up at Twentieth plus a couple of other outside films . . . Time to time, rumors have Marge and Gower Champion heading for New York to do the choreography for a Broadway musical. But with their M-G-M pictures such hits you can bet they’ll be kept busy on the sound stages in Hollywood . . . Dale Robertson tried to talk Tab Hunter into changing his name. And when Tab told him it had already been changed, Dale tried to talk him into changing it back again!

EVERYONE’S AMUSED BY: Those “dirty” looks Terry Moore’s casting in Mitzi Gaynor’s direction these days. It all revolves around rumored reasons concerning that fabulous top studio executive . . . The silly scuttlebutt that the Humphrey Bogarts were such rabid Stevenson fans, they fired their vegetable man when he voted for Ike . . . That fan letter received by Ray Milland, which reads: “Am looking forward to seeing your picture on television when I get out in 1963.” It was signed: “The Thief.”

HOLLYWOOD HIGHS: Carleton Carpenter and Barbara Ruick’s recording of “No Two People.” No two people have ever been better . . . Ethel Merman’s admiration for Donald O’Connor’s talent. She even came to the studio on her first day off to watch him do a number for “Call Me Madam” . . . Marlon Brando’s stirring speech as Marc Antony in “Julius Caesar.” Hundreds of extras (who understood every word) applauded like mad . . . Ann Sheridan’s “Academy Award” performance. She kept right on acting during a scene for “Flame of Timberline,” when a bee flew into her bustle!

HOLLYWOOD LOWS: The disheartening waste of Van Johnson’s name and talent. His glorified bit in “Plymouth Adventure” gives credence to the rumor that he won’t re-sign when his M-G-M contract expires . . . The casting of Ray Bolger opposite Doris Day in “April in Paris.” Talented and terrific the dancing comedian is, but as a romantic lover he makes a charming story seem ridiculous . . . The way gossips are trying to make a romance item of Barbara Stanwyck’s friendly and professional interest in her young co-worker, Bob Wagner.

ACCORDİNG TO CAL: Robert Horton has every director on the M-G-M lot trying to reserve his Services for future pictures . . . By the time you read this, that secret we promised Angela Lansbury we’d keep—may be public property . . . Pity poor Rock Hudson! He’s tom between sex and selfishness. Marilyn Monroe looked at his hide-away house in the hills while he was in Europe and now she wants him to forfeit his lease so’s she can buy it . . . Janet Leigh is exhausted from making so many movies, she says she’ll have to have a baby to get a good rest. Tony promises to cooperate. . . . Glimpsed at a recent Palm Spring tennis tournament: Ginger Rogers and Jacques Bergerac holding hands. Ginger is taking French lessons now that handsome Jacques has an M-G-M contract. After all, a gal does have to understand a guy—just in case he pops the question.

PIRE OF PEACE: Currently all’s well with the Frank Sinatra’s. To prove it, he escorted Ava to Africa where she’s making “Mogambo” with Clark Gable. The night before their last Hollywood flare-up, the Sinatra’s and the Gottfried Reinhardts went to Chasen’s for dinner. Frank and the producer rode in one car alongside of Ava and the producer’s wife in another. At red light intersections, Mr. S. gaily leaped out of his car, dashed over and bussed the beautiful Mrs. S.! Tempestuous though it may be, no one doubts their burning love for each other. On the other hand, sometimes the tum it takes is mighty confusing to everybody!

BEHIND THE SCENES: Reading in a column that Robert Wagner took Barbara Stanwyck to Romanoff’s, some of Debbie Reynolds’ prize pixie friends tried to induce her to finagle a date with Robert Taylor! . . . Run don’t walk to the nearest newsstand when Steve Cochran’s next interview appears. He’s calling it “Sex After Six,” a subject he finds interesting at any time.

IN CASE YOU CARE: From Canada, Gary Cooper goes to Mexico and then heads for England. He’ll be out of the country for eighteen months or more, which could be for tax purposes . . . Three non-professional wives altered an edict. Mrs. Ray Milland, Mrs. Jimmy Stewart and Mrs. Fred MacMurray (so improved in health) did a TV coffee commercial, the money going to charity . . . When Tony Curtis went to pick up Janet Leigh in a beauty parlor, he kiddingly called out: “Here I am, Mrs. Schwartz.” Two fat ladies bearing the same name came running out of their booths!

TRUTH ABOUT FEUDS: The usual mischief mongers would have you believe there’s feudin’ and a-fussin’ between Doris Day and Peggy Lee, who’s now at Warners too. ’Tain’t so. Doris wouldn’t feud with anyone. Besides, each songbird is terrifically talented in her own style of singing, but so opposite in type and temperament that they couldn’t possibly be rivals for the same roles . . . It probably makes better copy to say that “Gentlemen Prefer Blondes,” and Marilyn Monroe and Jane Russell prefer to ignore each other away from the camera. The truth is, the “Big Four” (as the gang on the set refers to ’em) happen to like each other very much.

LIGHTS, CAMERA, ACTION: Alan Ladd is Hollywood’s greatest ambassador of good will. Reports on his careful consideration of everyone during the making of “Red Beret” are an object lesson in diplomacy for other actors making pictures in Europe . . . The cast and crew of “Remains to Be Seen” was taken to task for kidding June Allyson. As a groovy young band singer, she wears skintight, low-cut gowns and all the glamour trappings. Whenever she took a step, everyone wolf-whistled at Junie and she got so embarrassed it affected her performance . . . As background music for U-I’s “Sioux Uprising,” the studio decided to use a special theme song. Jeff Chandler, who does a big switch and plays a cavalry officer in this one, suggested: “Sweet Sioux!”

FOR YOUR INFORMATION: Judy Garland’s favorite singer is Ann Sothern. Her inimitable style reduces Judy to tears every time Ann sings at a Hollywood party . . . Jack Benny gives the most lavish tips in Hollywood. Actually a very generous guy, he’s sensitive about having his “stingy” radio character confused with his true self . . . Leslie Caron loves the ridiculous way George Hormel’s eyebrows grow together and won’t allow him to “make alterations” . . . Susan Hayward really lived up to a redhead’s legend for having a temper, when a top studio executive invited her to a private screening and didn’t invite husband Jess Barker . . . Burt Lancaster finally relented and posed for group shots when his family visited him on the Fiji Islands where he was shooting “His Majesty O’Keefe” . . . Marlon Brando does a highly amusing impersonation of James Mason which he tried out the first time the Masons invited him to dinner! The reviews on “John Brown’s Body” were so great for Tyrone Power, he says: “They read as if I’d written them myself.”

Mr. Big: Ask any up and coming young actor which star he’d like most to be like and you get one answer, Cary Grant! They see all his pictures, they study his acting technique, they even buy clothes where Cary shops. Recently, an actor new to Hollywood introduced himself at a party. “Mr. Grant,” he said politely, “would you mind telling me who cuts your hair?” Always the realist, Cary answered: “Not at all—anybody!”

Date with Fate: When Aldo Ray tested for “The Marrying Kind,” Jeff Donnell assisted him. He had no friends in Hollywood, so Jeff and her radio-producer husband rented him a room in their valley home. Later, when his career was set, Aldo moved to Malibu Beach. Time passed, now Jeff and her husband are divorcing. Until his own divorce became final, Aldo never dated anyone. Recently he and Jeff began making appearances together in public. Friendship or romance, Hollywood is asking. Cal says: The important thing is that two very nice and very lonely people found each other.

Stalking the Stork: Hungry lunchers watched with amusement when Shelley Winters and Ruth Roman greeted each other at Romanoff’s. Both pregnant and both looking it, they exclaimed in unison: “What’s new?” . . . Elizabeth Taylor and Michael Wilding are building a wishing well for their baby. It’s a wonderful idea! Every time a guest throws in a coin a kind wish goes with it. By the time he’s twenty-one—young Wilding could be a millionaire! . . . There’s a new baby at director Charles Vidor’s house—a baby monkey. They sent away for him and so help us—he arrived wearing diapers.