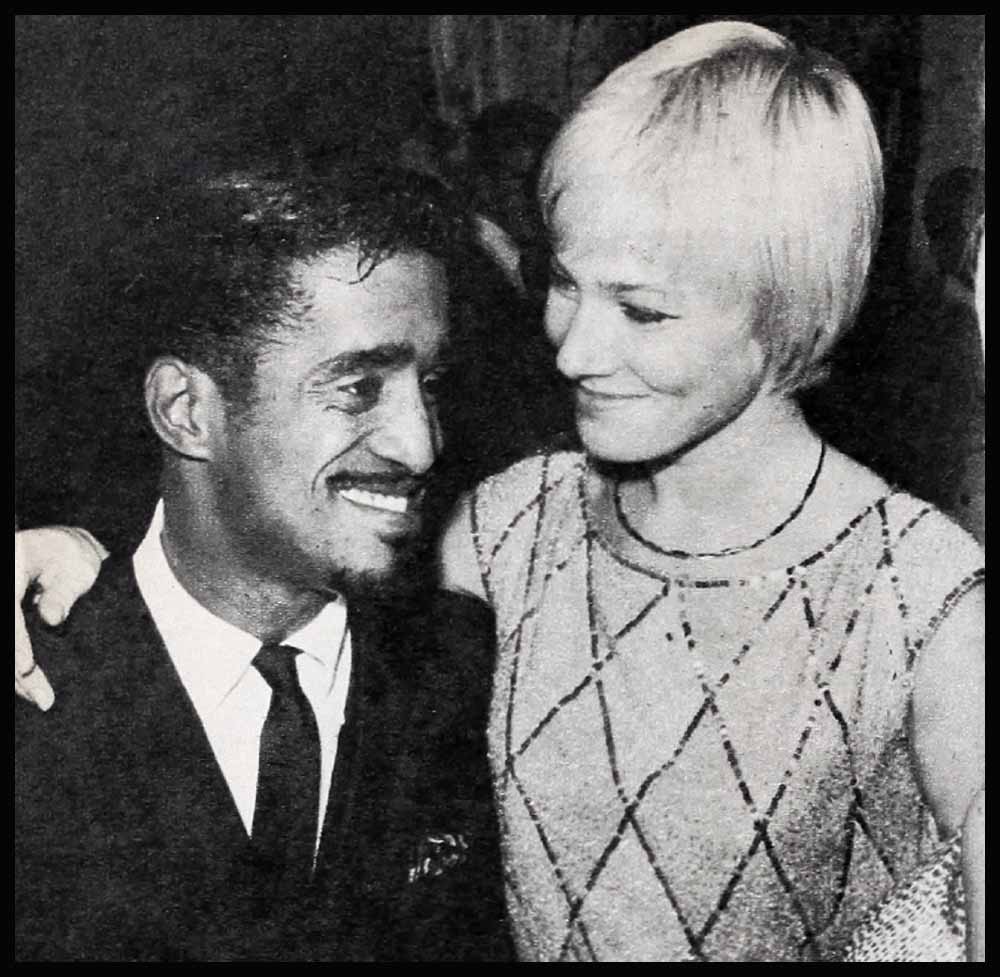 “How May Changed Me As A Man?”

All you have to do is look at me to see how much marriage has changed me. Man, I’m a different person now!” That’s Sammy Davis speaking with passionate intensity but complete objectivity about his marriage to May Britt—now nearly three long, memory-filled years old. Three years which have taken Sammy and May across a vast divide—separating the unhappy, hectic, troublesome early days of their marriage to the present ebullient, exciting and joy-filled life they share together.

“I wouldn’t trade what I have in this life for anything else you could offer me,” Sammy said with feeling. “I have found the real meaning of happiness in my marriage and that’s all that can count for me.

“It’s made a different man of me. And I can’t say how much I love it.”

Sammy didn’t have to say that he changed—it was easy to see that he had. He had changed in a thousand ways, and yet he hadn’t changed at all. That sounds contradictory and perhaps it is. But the truth of the matter is that Sammy is still that amazing and talented young man with the gift for fine rhythmic, agile dancing, melodious song and deft ad libs. But there is more to the new Sammy Davis.

The days of, as he puts it, “Sammy the swinger” are gone. He can still move like a lithe racehorse injected with several hot charges of hyperthyroid, but his course is no longer the freewheeling, swinging, gay party route he once cavorted.

I’m just a homebody now,” Sammy said with pride, as if he had achieved a life long ambition. “I think it’s okay to have a fling. Everybody does. I’ve had mine—but now I’ve shed it. And I’m glad.”

The credit for this change in Sammy belongs, of course, to his honey-blond Swedish wife who has herself undergone a major metamorphosis since exchanging “I do’s” with the man she chose to live out the rest of her life. (You read how marriage has altered May Britt in last May’s Photoplay.) In reaching his present heady, delicious State of matrimonial bliss which Sammy describes as “the greatest feeling a guy can have,” he had to lumber over some of the most treacherous terrain any man has traveled in his pursuit of happiness. There were many problems.

What was Sammy’s biggest hurdle as he started out toward the goal that he has finally reached with May?

“Our careers,” Sammy said, referring to both his and May’s. At the time of their marriage, back in late 1960, May Britt had a promising future in Hollywood. She had already established herself as a gifted actress in Europe and her star was on its ascendancy here. As for Sammy, he was riding the crest of success as one of the most popular and highly paid entertainers in the country. There were many people then, as there are now, who ranked Sammy as one of the most phenomenal artists ever seen in the realm of entertainment. They say he’s another Al Jolson.

“Right from the beginning, I knew our decision to marry would do something to our careers,” Sammy related. “I didn’t know what May’s studio would do, but I didn’t expect them to cheer us. Yet I knew I had to talk to May about it, to warn her.

“First off, I had to ask myself if my affection for May, this wonderful human being, was enough to fill the void in her life that would come about for lack of a career. It was a predestined thing that our marriage would bring her career to a kind of standstill until all the public reaction was observed and counted.”

Sammy cited the immediate boycott imposed by theaters in the South on May’s latest film, “Murder, Incorporated.” Some of her previous films were not banned; in fact, a few were re-released. But the handwriting was on the wall—May’s future in the South was dim indeed.

“But I felt I had enough love to give May to make up for her lack of career,” Sammy said earnestly. “I was honest enough to discuss these matters with May. I had to tell her what she had to expect.”

May’s reply to Sammy was just what he expected from the woman he loved.

“First comes what we have, and then comes whatever artistic thing or feeling that I might have,” May told Sammy.

Nothing was so dreadful as the slings and arrows flung by a rabid few at Sammy as he made his rounds of the night clubs during those trying early days. The announcement of Sammy’s and May’s intention to marry was made in London.

“Right away,” Sammy related with grimness as he recalled the events of that day, “we became the target of the hate groups. That night we went to a restaurant. . . May’s father, who had come in from Sweden to visit us, came along. And the Nazis came, too.

“I was absolutely shocked. You know, it’s frightening to see those guys in uniform, wearing swastikas, parading up and down with signs carrying messages like, ‘Mixed marriages are taboo’ and ‘We do not want a Negro Jew.’ They also brought a little dog and it had a sign on its back saying, I’m black and I’m not a Jew.’

It was the same thing in the United States—and not in the Deep South—but in Washington, D. C., and in Hollywood. These were times of real terror for Sammy and May, but especially for Sammy who became the prime target for most of the racial and religious slurs that were hurled by the irresponsible hate mongers.

“I had expected it,” Sammy said, “because I didn’t think the haters would come over to my side. There’ll always be the haters. There were hate letters even before I was married, and they kept coming in larger numbers afterwards. But, thank God, they have stopped at last.”

Actually, as Sammy explained it, there is still an occasional nasty letter. But nothing like it used to be. As May had indicated in her story, the hate letters suddenly stopped after the baby came.

With little Tracey Hillevi to show the world that the love between Sammy and May was meant to be as permanent and enduring as anything in this life can be, not only did the prejudice diminish greatly but their life together—Sammy’s and May’s—started to change very quickly.

“The pressure was off,” Sammy explained. “Now we didn’t have to face those outside problems, the ones that were apart from those which any two married people must ordinarily face. I was glad it came down to that. I never wanted a lot of people to presume they could deprive me of my right to a full life and pleasure with the woman I love—and with the baby that we had brought into this world.”

He fooled them all

The changes in Sammy became evident in many ways. No one would have bet a plug nickel on his chances of ever breaking away from the raucous, feverish routine of partying and night life that seemed to be an integral part of Sammy’s life. Yet he fooled them all.

Actually, Sammy had begun to slow down long before Tracey Hillevi was born. But when the baby came, you could almost hear the screeching of tires as Sammy jammed the brakes on his fast-paced past life. Certainly he remained the best of friends with his pals, Frank Sinatra, Dean Martin, Peter Lawford and Joey Bishop. But they were no longer the hub of his life. Now there was May—and the baby.

Now there was a far greater responsibility on Sammy’s shoulders. Far greater than on the overwhelming majority of men who enter the happy domain of fatherhood.

“It’s tough for anyone to bring up a baby in this kind of world, but with us I knew, and May knew, that it was tougher.”

They faced the challenge determinedly, hopefully, but most of all, with unbending courage. And as the days and weeks passed, whenever he and May stood over Tracey Hillevi’s crib and gazed down on their tiny offspring, Sammy felt a growing conviction that his presence in the nursery was the most important thing in the world.

“The three of us together showed me,” Sammy said, “that there is nothing stronger than the knot that ties the family together.

“I knew now that my place, as much as May’s, was in the home. I realized the job which lay ahead, of raising a little girl and of teaching her the proper values of life. I didn’t want our little girl to grow up wondering about her place in this world.

“The way I want things to be is that when Tracey Hillevi reaches the age of understanding, she’ll already have an idea of the love her mother and father have for her and for each other.”

For those reasons, Sammy had to drastically alter the pattern of his past and assume the character and poise of a “domesticated” man. It wasn’t as simple as it might seem, for Sammy is not like most fathers who work from nine-to-five and return home in time for dinner and an evening with the family beside the hearth. As an entertainer, much of Sammy’s time must necessarily be spent away from home. Sometimes, he’s away from his Sunset Strip home for weeks. But when he returns, he spends almost every minute at home with May. with Tracey Hillevi, and now with Mark, their two-and-a-half-year-old adopted son.

“My life is full and complete,” Sammy said with a glowing smile. “No man could ask for anything more.

“I used to be Sammy, the big spender. No night was complete unless I showed a first-run movie at home for my friends. Even after we were married, I would sit up with May through the night to watch those films.

“But we don’t do that any more. Now I’m satisfied with television. May is, too. And it’s a lot cheaper. Mind you, I’m not complaining about the money. Fortunately, I’m well off. I never have to worry where my next dollar will come from. But it’s a sign of the change—maybe it’s a new maturity. Who knows really? Does any one?”

Marriage to May Britt has forged still other changes in Sammy Davis.

“I hold to a new sense of values,” Sammy said. “I hold them with a determination that I never knew I had before. I don’t want ever to lose what I have now. So I do everything I can to preserve these wonderful possessions.

“For example, I don’t take any more chances with this new-found happiness of mine. I used to fly all the time. No more planes for me. Now I take the train. I play it safe for the family. I know they need me—and I want to be around for their sake, always.

“I’ve got to be around,” he said urgently, “to watch over ray family. Together with May, I want to teach the children to be good, and to hope for their happiness as we hope for our own.

“Our world is no longer as hostile as is used to be. It is a quieter. much more peaceful and better place. The first year of our marriage was the toughest. I’m glad that’s behind now.

“If anyone could have told me back in 1960 that would be this happy—man, I wouldn’t have believed it.

“If anyone could have told me then that I would have changed as I have—man, I wouldn’t have believed that either.

“But there it is. I have changed—and it’s the greatest.”

You can see Sammy Davis, Jr. in his latest, “Three Penny Opera,” Embassy.