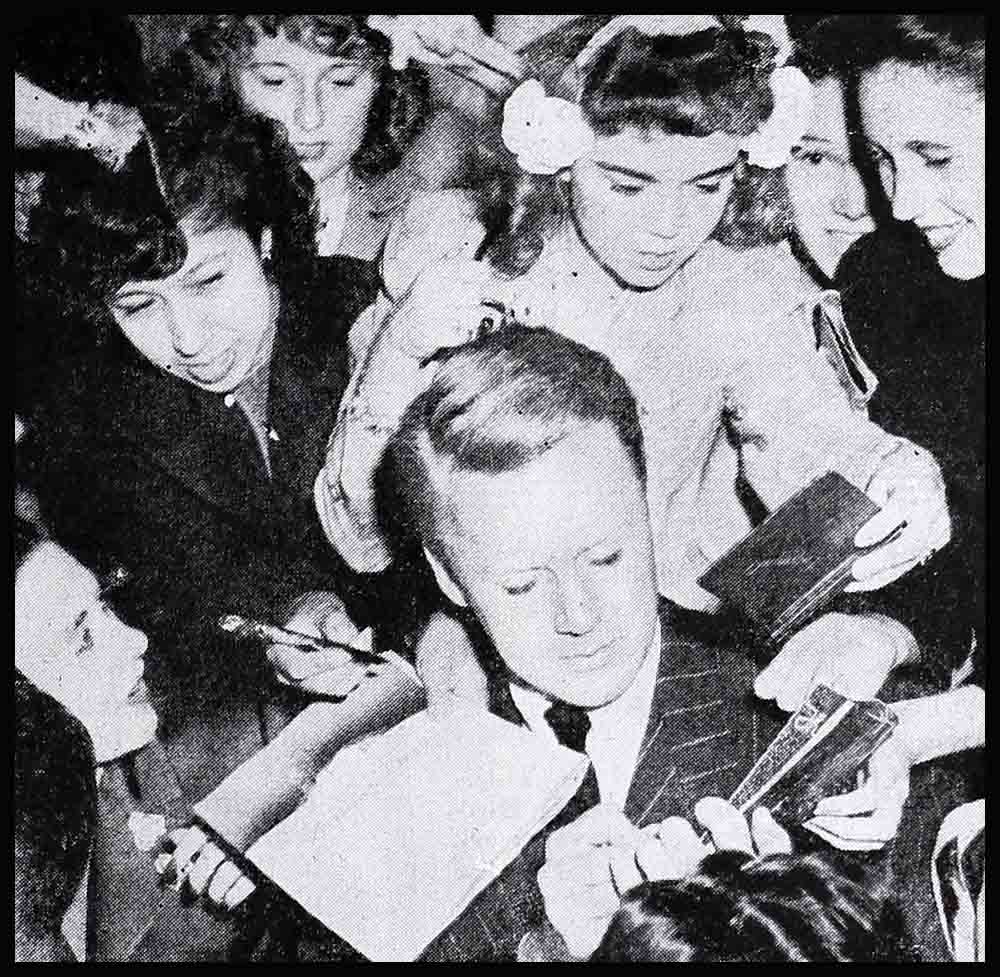 ABOVE all when I think of 1945 lying only a handful of days before us, I think of and pray for peace, a peace which will be enduring and fling the four freedoms—freedom from want, freedom from fear, freedom of speech and freedom to worship—over the length and breadth of the earth.

For myself in 1945 I hope for a continued association with Hollywood. Hollywood is so young and stimulating and aware and so crowded always with people doing all manner of interesting things—and doing them exceedingly well.

I love Hollywood because I have found so many important and wonderful things there, including friends. For some of these friends I have New Year predictions to make; several of which will, I think, surprise you. . . .

I predict, first of all, that Cary Grant will spend much of the next year traveling; both here and abroad—with his beautiful little Barbara. However, I suspect he will make one picture anyway. For he’ll need money to pay his traveling bills. Cary isn’t rich. I have his word on this. “Cary, how much money have you saved?” I asked him recently. “Are you well off?” He shook his head. “I have an income for life, Elsa,” he said, “but it’s most modest.”

However, Cary wants to learn about the world; what there is left of it. At lunch the other day he said, “I’m going to get around and learn about the things and the places that Barbara knows and loves. So I’ll be a better companion to her than I was in the past. Previously, I know, I just didn’t have enough first-hand knowledge of the world to compete with the people and places Barbara has known all her adult life.”

Next I predict that Jeanne Crain, who not long ago made her bow in “Home In Indiana,” the Technicolor picture that was such wonderful propaganda for the corn belt, will—before 1945 ends—be right up in the front rank of top-notch stars. Jeanne makes sense. She is a conscientious worker. That’s half of it. Jeanne also is charming to look at and possesses, to an nth degree, that indefinable chemical attraction which keeps men trailing her and finds girls understanding why. All of which, you’ll admit, is something!

Incidentally, after Jennifer makes “Love Letter” I look for her to appear in her first comedy role and to be a sensation. She has a lovely lightness which no screen role has yet given her the least opportunity to display. Further-more, I shouldn’t be surprised if Jennifer appears on the New York stage before 1945 is over. Her heart is set on it.

I do not think her heart is set on anything or anyone now, only her career. She married Robert Walker after a school-chum friendship and, although they are the best of friends, love is as far from Jennifer’s heart as I am from Mars. At parties I have seen Bob constantly join her but not in the romantic way. After all, they have two small children and I don’t think they wish them to be brought up in the atmosphere of divorce where children feel the lack of one parent.

SPEAKING of the stars who will spangle 1945 screens, there are, also, Gloria De Haven and June Allyson. These two “flitter bugs” are now running neck and neck in the eternal race for popularity. On the big Metro lot where they work they are very definitely rivals. Gloria soon may surpass June. She’s “showier.” But only for a time. In the year’s run I am sure June will come out ahead. June, in appearance and personality, is more familiar to most of us than Gloria. And we always love best those we understand best. Besides, June—having come through a youth which was physically handicapped—is more finely tempered.

“The Voice” will go right on sweeping everything before him, as before. He’s no flash in the pan, Frank Sinatra. He has terrific appeal for others than bobby-socks. At my party to celebrate the liberation of France he faced a brilliant and discriminating audience as he stood before the mike on a stage erected in my garden. He was, if any man ever was, on the spot. And he knew it. Frank is not remotely stupid. To my amazement the greatest stars, who I would have thought would look upon Frank as a phenomenon, were as “swooney” as the bobby-socks ever were. Loretta Young, her hand clasped in that of her husband, Colonel Tom Lewis, and father of their infant son Christopher whom both she and Tom adore, said to me: “Elsa, what is there about that boy that makes you feel he is singing to you—and you alone?”

Tom Lewis smiled, “I suppose I should be jealous,” he said, holding Loretta’s hand tighter, “but Loretta has never been sweeter to me than since she heard Frank sing.” Incidentally, when Frank came to the end of his program the applause was thunderous.

No doubt about it, Frank Sinatra is rich in that magnetic charm which, in all phases of show business, is the thing which makes great performers. It has brought him along and it will help him endure.

Dana Andrews, not long ago a lesser light on the Warner lot earning $75 a week, a paltry sum in Hollywood, unquestionably will be one of the year’s outstanding heavies. With his new technique, as seen in “Laura”—which the girls like so much—I believe Dana will leave Humphrey Bogart and George Raft and other screen bullies far behind him.

For Van Johnson I predict indescribable good fortune. Van doesn’t have a perfect profile. He doesn’t have any of the physical features which usually promote gentlemen in feminine good graces, actually. However, the increasing jingle of our money flowing into box offices proclaims he has something else, that elusive charm which springs from the inside. Metro’s hopes for bright-haired Van, consequently, are high. Even so, I say he will exceed their fondest expectations.

I need no crystal ball, after all, to make this prediction. During the past year Van has come along amazingly, although he has appeared only in comparatively few pictures in addition to playing the young student doctor in Lionel Barrymore’s “Dr. Gillespie” series. Next year he’ll have his fine performance in “Thirty Seconds Over Tokyo” to recommend him further. And his role of the bomber pilot in “Weekend At The Waldorf.” The fine and mature actor, Walter Pidgeon, does credit to the first male role in this picture, but Van—especially in his love scenes with Lana Turner—gives his audiences something to remember him by.

Will Van marry during this coming year? I very much doubt it. Always the past is the best yardstick we have to measure the future. And while Van has always liked feminine company he never has been thrown off balance. He seems to have the wonderful faculty of taking ladies or leaving them. Which makes him irresistible, of course! Besides, I think Van—don’t forget his Swedish blood—is a man to concentrate upon one thing at a time. His career now is uppermost in his mind. He will not, unless all previous signs fail, minimize his Hollywood opportunities by letting romance becloud them.

Miracles can happen, of course. But usually they don’t.

Speaking of “Weekend At The Waldorf,” I predict this will be the top picture of the coming year. The all-star cast—Ginger Rogers, Lana Turner, Bob Benchley, Xavier Cugat, Walter Pidgeon, Van Johnson and Constance Collier—appear as guests at this great hotel and each contributes his or her own story.

In the Year of Our Lord, 1945, I doubt if you’ll see Orson Welles sawing a woman in half or acting on the screen. And, wonderfully as he has done these things in the past, I’m glad this is so. There are more important things for a genius like Orson to do. (I do not refer to him as a genius carelessly. Gradually Orson has been weaned away from motion pictures and the stage. He wants to be a statesman, diplomat or politician. He loved Mr. Willkie. He adores ex-Vice-President Wallace. He admires Mr. Morgenthau, whom he put on the air last June. Remember? Henry Morgenthau is not an imaginative man and I have never thought him a very good speaker. But when Orson trained him, helped him write his speech, produced him on the air, really, he was very fine.

Orson is a great believer in mankind. He a]so is devoted to Franklin Delano Roosevelt who, in turn, regards him highly. Very likely, someday, Orson will find himself in a high post, minister to one of the Latin American countries perhaps. He has traveled down there and speaks languages fluently.

Garbo will not, I say, make another picture here. But, after the war, she will go abroad to make pictures in Europe.

Bette Davis, unquestionably the Duse of the screen, will—in 1945—be the first actress to play the classics on the screen. I see her as Ibsen’s immortal Hedda Gabler, as Portia in “The Merchant Of Venice.”

I also look for Bette to marry in 1945. She is distinctly a one-man woman. She never has and never will be given to light affairs of the heart. When Bette cares she cares tremendously. Therefore I doubt very much she would have gone to Georgia on her vacation to visit Corporal Lewis A. Riley unless Corporal Riley was the man in her life. And when a girl from New England falls in love she gets married.

Lucille Bremer will be a name to remember in 1945. Lucille, a beautiful creature, dances like nothing in this world with Fred Astaire in “Ziegfeld Follies.” And Fred, dancing with her, is a new man.

I predict Charles Chaplin will give the screen “Landru,” the French black-bearded murderer who did away with six-teen wives I shouldn’t be surprised if he called this picture “Lady Killer.” In it he will not wear a black beard, only the well-known mustache that Herr Hitler copied. And, count on it, “Landru” will be hilarious. As I understand it his wives will be all so obnoxious, emphasizing the worst traits, that there will be approval when they come to their abrupt ends.

JOAN FONTAINE will marry again. This time her husband won’t be an actor. He’ll be a banker. I wish her happiness. For Joan has a sense of inner beauty as great as her outer beauty.

Underscore the name of Clifton Webb when you make out your screen shopping list for next year. For in “Laura,” Clifton—combining sophistication and ultra-elegance—becomes a great new screen character. Completely sinister, he plays the suavest, most believable and most delightful murderer you ever saw.

Lauren Bacall will be another must on your list in 1945. Her first role in “To Have And Have Not” earned her four stars. Now she’s working—again with Humphrey Bogart, in “Big Sleep.” But then I predicted just success for Lauren—who’s real name is Betty Bacall—almost in the same minute I laid these old eyes upon her, before she ever had appeared on the screen. It is almost a year ago now that I wrote, glowingly, about her in Photoplay.

Greer Garson will reach new heights when, following “Valley Of Decision,” she appears in a picture with Clark Gable.

Also, when MacArthur has recaptured Manila, keep your eye on Greer. She will bend every effort to go there as soon as her picture commitments permit, in a USO camp show or some other capacity, to see her husband Richard Ney. Furloughs now are not in the cards for many men in the Pacific theater. Hence, since Richard can’t come to her, Greer will go to him.

Here’s to 1945! May it prove, for all of us and so for the world, a year of fulfillment. And it will, if we will work to make this so.