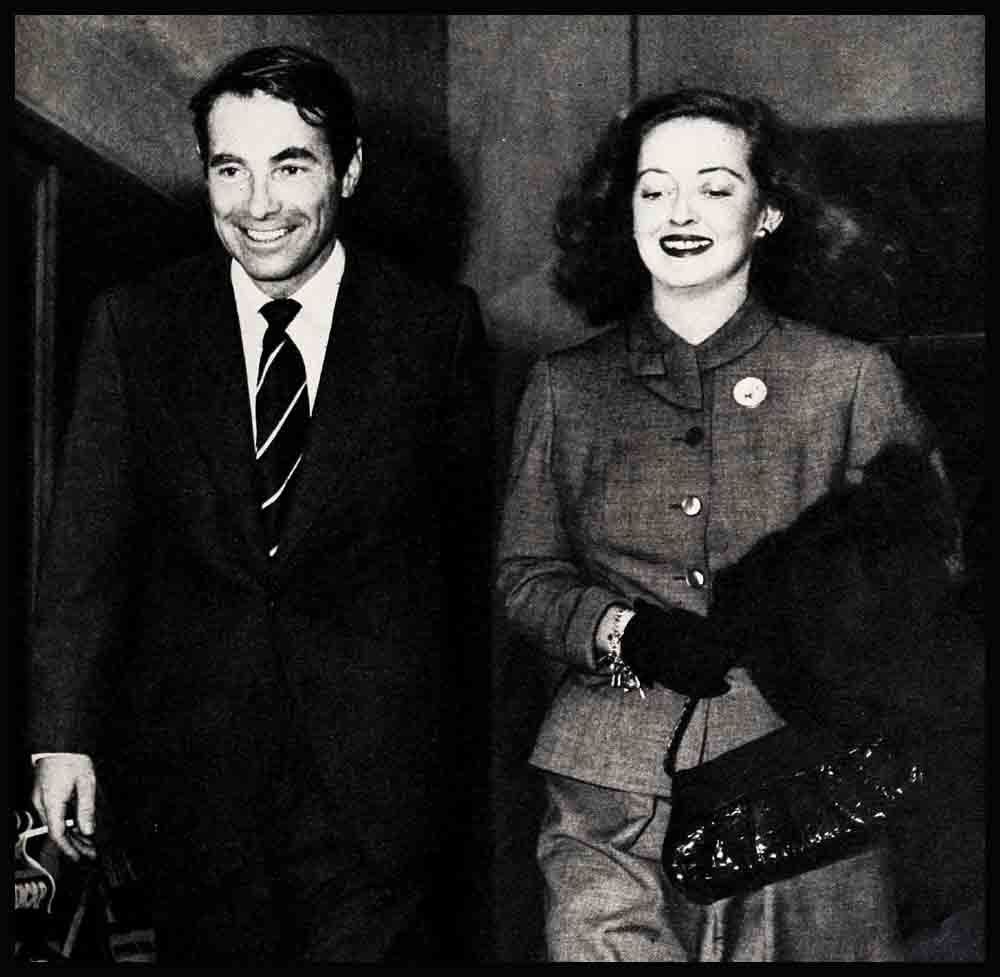 Our girl Bette is a very grateful character these days. She is grateful to Claudette Colbert because she bowed out of “All About Eve” after she twisted her spine in a backstairs tumble. She is grateful to the Curran Theater in San Francisco for being so heavily booked that director-writer Joe Mankiewicz, who insisted upon authenticity in his theater scenes for “All About Eve,” couldn’t wait for Claudette to recover.

Thanks to “All About Eve,” Bette won herself a husband (Gary Merrill) and comes March, she also may win herself an Academy Award (Oscar). All in all, fairly lively going for Miss Davis.

Now it isn’t so difficult, really, for an actress to get an Academy Award in Hollywood. It happens every year. It has happened to Bette twice. All a girl needs is a good part in a major production and enough acting know-how not to ruin it. But getting a good husband is something else. The bachelor girls of Hollywood are not bachelor girls because they like it, and you can say that again.

Bette Davis and Gary Merrill first met at Twentieth Century-Fox studios early one Sunday morning last April when Gary was testing for the part of the young director in “All About Eve.” Bette had seen him in “Twelve O’Clock High.” And she had heard his voice over the air many times on such New York radio programs as “Theater Guild,” “Helen Hayes Theater,” “Gangbusters,” and “Superman.” But the two had never met until that eventful Sunday morning.

“Certainly wonderful of you to come to the studio on a Sunday,” Gary said to her.

“For this part,” said Bette, “I would come to the studio seven days and nights a week.”

The first two weeks the company worked at the Curran Theater in San Francisco. Bette, who usually has more pep than a bottle of vitamin pills, was a mess. Her marriage with artist William Grant Sherry had ended disastrously, and in brutal headlines. She was hurt, humiliated and heartsick. She kept strictly to herself. Bette never dramatizes herself. If she has a problem to work out she never discusses it with anyone. As Perc Westmore, formerly director of make-up and hair styling at Warner Brothers, once told me, “If Bette’s heels went da-da-da down the corridor in the morning I’d know she was in high spirits and we’d have lots of yaks. But if they went dum—dum—dum I knew she was worried and would sit in silence for hours.”

In the Curran Theater those heels went dum—dum—dum. The cast was considerate and busy. They left Bette alone. “I was miserable, utterly,” said Bette. But one member of the cast was most sympathetic. Gary Merrill. Would Miss Davis like coffee? A cigarette? A sandwich? Someone murdered?

“You don’t know when you fall in love,” Bette answered the question I shot at her. “I guess I just liked Gary from the beginning—that’s all. I met a guy I thought was wonderful. And we fell in love while working in the picture.”

And she added hastily, “Now, really, I’m too old for romance stories. That’s kid stuff. Let’s just say I am wonderfully happy. I feel that this is a good marriage.”

Back at the Hollywood studio Anne Baxter, George Sanders, Celeste Holm and other members of the company noted that Miss Davis and Mr. Merrill found a lot of things to discuss in Miss D’s dressing room. Once more her heels went da-da-da across the set, once more she laughed easily and heartily in the Davis manner.

Following Gary Merrill’s El Paso divorce (he was married in 1941 to Barbara Leeds but had long been separated) Bette flew out from New England where she had been vacationing with her family and daughter Barbara. Bette and Gary were married in Juarez, Mexico, on July 28th.

“We drove East after we were married,” said Bette. “I have driven across the country several times in the past, but Gary never had done so. And he thinks he never will again. One thing was great fun. We stopped at auto courts all across the country and were seldom recognized.”

They carried cameras along. “We tried to take a few snapshots of each other for the fun of it,” said Bette. But after a half-hearted go at photography they gave it up. Neither of them knows one end of a camera from the other. “Gary thought we should have a few pictures of our honeymoon for the records. He isn’t a sentimental person ordinarily.”

Maybe not ordinarily. But about some things Gary can be very sentimental. He didn’t want Bette to see “All About Eve” (some couples have their song, but Bette and Gary have their picture) without him. So when it was shown in Hollywood recently at a gala premiere at Grauman’s Chinese, Bette appeared for publicity purposes, in the forecourt where the day before she had planted her feet in cement. She refused to see the film until Gary got back from Germany and she could see it with him.

Despite the fact that she describes herself as stubborn, balky and opinionated, Bette is as sentimental as a Victorian lady with lace cap and rustling taffeta gown. She rarely makes new friends because she loves her old ones so much. And when she was making “Payment on Demand” at RKO last winter she had little Barbara play a scene with her in the film.

“A sentimental gesture, utterly,” said Bette. Then she eagerly pointed out that Barbara had received $55 for speaking one line. “Not bad for the child of an actress who once struggled along for ages on $35 a week,” said Bette proudly.

Bette and Gary honeymooned at West- port Island in Maine. They lived in one of the back-to-nature shacks, sans bathroom. Little three-and-a-half-year-old Barbara visited them for a week, and was completely dismayed by the Chic Sale. Bette did the cooking on a wood stove by the light of a kerosene lamp. Bette has never been one to take an active interest in cooking. But Westport Island brought out a hitherto undiscovered domestic streak. “I specialized in soups,” said Bette. “Definitely not the kind that comes out of cans. It was quite an experience cooking on a wood stove. Maine was dry this summer and we had to have bottled water. Between bringing in the wood for the stove and rowing the boat over to the mainland for water, Gary was a very busy groom.”

At the end of three weeks the Merrills moved on to Prouts Neck, Maine, where they spent two months—up until the time Gary had to leave for Germany to appear in “Legion of the Damned” for Twentieth.

“Gary used to spend summers at Prouts Neck when he was a child,” said Bette. “I spent my childhood summers at nearby Ocean Park.”

I asked Bette to describe Gary Merrill. “I don’t know how to describe him,” said Bette. “When he was born the mould was broken. He’s definitely an individualist. He doesn’t care what anyone thinks of him. He does what he believes in—and that’s that. This I envy in him very much. I care a great deal what people think of me. And I am always compromising with my better judgment.”

Gary Merrill is an actor’s actor. He loves to act, and lives to act. Unlike so many New York actors, he doesn’t think of pictures as a “gravy train” and “a way to make a fast buck.” Born in Windsor, Connecticut, he has always wanted to be an actor as far back as he can remember. To please his father, an insurance man, Gary attended Bowdoin College, where he received some excellent advice from the Dean. . . . “If acting is what you want to do, don’t waste four years here.”

Best advice he’s ever had, he thinks. He dropped out of college in 1935 and entered the Hilda Spong dramatic school in New York.

“He usually looks like a beachcomber,” said Bette. “He lives in dungarees and a plaid shirt. And has the blackest beard in history.”

When it comes to a sense of humor and a love of gags, the Merrills are a photo finish. A New York stage and radio actor, Gary was completely thrown off by the long waits (camera set-ups usually) between scenes in pictures. When he was making “Where the Sidewalk Ends” he gathered up all the cigarette butts he could find on the stage and scattered them around his chair in his dressing room. When the assistant director appeared at the door to call him to the set he said, “Look, I’ve been waiting so long I’m a nervous wreck.”

Bette likes to play along with a gag. At a Warner Brothers party several years ago (Bette was under contract to Warners for seventeen years and was called the Fourth Warner Brother, a name given her by Bob Hope) Bette, with tongue in cheek, played herself in a sketch called “The Strange Career of Bette Davis.” The sketch started with the day way back in 1932 when Bette Davis first came to the Burbank studio, and Jack Warner (played in the skit by Robert Alda) informed her, “I can’t hire you, my girl. You can’t even spell ‘Betty’ correctly. I’m sure you aren’t very bright.” And ended, several scenes later, with Bette sitting in Jack Warner’s chair, her feet on his desk, smoking a cigar.

At Gary’s request Bette recently rented the Dick Barthelmess house on the beach between Santa Monica and Malibu. “It’s a poem of a place,” said Bette. “Gary is rabid about being near the ocean. He wouldn’t live any place else. I love it too.” The week before he returned from Germany she spent “pushing furniture around” and “up to my ears in pots and pans.” A natural born putterer is Miss Davis. Her home at Laguna which holds so many unhappy memories for her is up for sale. Bette is not particularly an athletic person, but she likes to swim. Most of all she likes to play on the beach with little Beedee. “Gary is heaven with Beedee,” she said.

Dell, Bette’s cook, who has been with her since 1933, and who makes as big a production out of poaching an egg as a chef does out of crepes suzettes, has been installed in the new beach house, and has joined the Merrills’ mutual admiration society.

The only other member of the household is Claus, Gary’s rottweiler (a dog of the Doberman family) who is so named because Gary found him at Christmas time.

Happiness and domesticity will never keep Bette from making pictures. “I’ll keep working,” she said, “until they have to wheel me in on the set. Terrifying, isn’t it?”

While Gary was in Germany he was discussing the merits of various American and English stars with a young British army officer who hadn’t the slightest idea that Gary was married to Bette. Since Gary was most complimentary about Vivien Leigh and Jean Simmons, the Britisher thought he’d better say something nice about American stars. ‘Well,” he said, “at least you have Bette Davis.”

“I sure have,” said Gary enthusiastically. And that’s for sure.