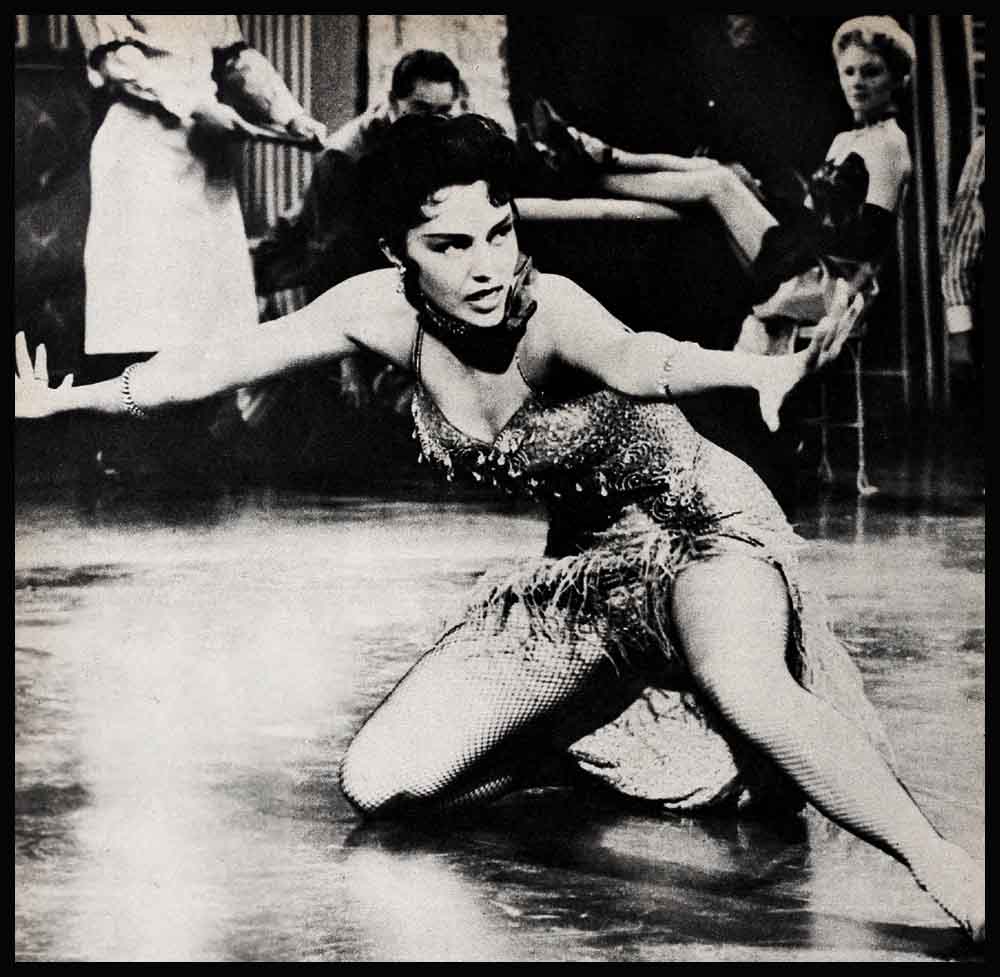 Cyd Charisse may go ’way up in the movie world, now that M-G-M’s leading attraction, Grace Kelly, has become a Princess. And lots of people are already congratulating Cyd on her bright new future.

There’s been talk of her taking over Grace’s role in “Designing Woman,” and she’s already set for the lead in “Silk Stockings.”

Cyd will fill the role as well as the stockings nicely. I made a little boo-boo when I talked to the beautiful “new Cyd Charisse” about this recently.

“What’s that thing in your hair?” I asked.

“A streak,” she replied prettily. “This is the first time I’ve had streaks.”

“A gray streak!” I exclaimed. Then, realizing I’d said something unforgivable, I added, “Oh, you’re too young for gray hair. Come now!”

“But what does a girl with beautiful smoky brown-black hair do to get a blond streak?” I inquired.

(A man runs across more useless information when he writes about glamour girls.)

“Sidney thought of it,” Cyd said.

“Sidney who? Cydney Charisse?” I said, and then threw in a “har har” in the Jackie Gleason manner just so she’d know I was joking.

“No, Sidney Guilaroff, the M-G-M hair stylist who ‘creates’ coiffures for Grace Kelly and the other stars,” Cyd explained.

“That’s something I’ve been dying to find out so I can tell the other fellows,” I aid. “Just how a stylist creates a woman’s coiffure. How does he?”

Miss Charisse and I were having this enlightening conversation at the Hotel Plaza in New York. She took a small sip of her drink before launching into the tale.

“Well,” Cyd began, “Sidney sets the styles. He looks at your hair from all angles, and maybe for one suit he’ll comb your hair three different ways.

“He always sets it the first time. That’s ‘creating.’ Then the next morning, Virginia Darcy, who’s just a wonderful hairdresser with a wonderful personality, takes over and follows the styles Sidney has created. She’s the hairdresser that Grace Kelly took along to her wedding.”

Cyd patted her hair down nervously the way women often do.

“Mine is kinda messy right now,” she apologized. “Neither Sidney nor Virginia did this to my hair. Nature—the wind and the rain—did it!”

“I still haven’t found out about the blond streak,” I mentioned.

“Oh, yes!” Cyd said. “Sidney said that since my hair is so dark, a little blond streak would give it a little highlight. It would make it seem as though a little light was shining in the top of my hair. Give it a little life. And it did!” Cyd added gaily.

“In the picture,” she referred to her latest, “Meet Me in Las Vegas,” produced by Joe Pasternak, “you couldn’t tell there was any streak in my hair at all. But, when I was on television, I heard a couple people say ‘Why, she has a gray streak in her hair!’ It isn’t a gray streak, it’s blond.”

“I know it perfectly well!” I replied, guiltily.

But this is all part of the lovely new Cyd Charisse who came into being when producer Joe Pasternak had “Meet Me in Las Vegas” written especially for her. Her handsome husband, singing star Tony Martin, while sitting in a theatre watching her picture, saw and heard a couple of males in front of him drooling over his wife. Later, when they recognized him, he congratulated them on their good taste.

“Is Tony angry or jealous about this sexy quality that the picture gave you?” I asked.

“Tony just said, ‘Well, I’m glad it was one of us that was talking like that.’ ”

This “new Cyd Charisse” finds herself being called upon now to pose for sexier-looking pictures.

Arriving for one picture-sitting in New York, wearing a tight-fitting dress and a mink coat, she was greeted by a photographer who asked, “Where are the suits?”

“What suits?” she asked right back.

“The bathing suits!” exclaimed the lensman.

“I don’t want to do bathing suits all the time,” she pouted.

“We don’t call them bathing suits,’’ pointed out the photog. “We call them ‘beach fashions.’ ”

“Yeah, and you still look good in them!” still she rebelled.

“When you reach a point where you’re not the one they ask to pose in a bathing suit, you’ll wish for the good old days like these,” a studio spokesman said to Cyd.

So she gave in. And she was good-humored about it.

“You never know, though. Maybe someday somebody will say, ‘By the way, keep this coat if you want to.’ Probably not to me, though!”

Actually, Cyd’s a serious gal who concerns herself with doing the proper thing, with studying foreign languages, and with the upbringing of her sons, Tony, Jr., 5, and Nicky, 13.

“Little T is at the age where he no longer likes being called the baby,” Cyd says. “When I tell him, ‘You’ll always be my baby,’ he won’t buy that.”

While in New York, Cyd spent a lot of time in a famous toy store buying Little T a train that he could drive around the house.

“You can lose your mind and your salary in that store!” she complained cheerfully afterward.

It happened that Cyd was the mystery guest on What’s My Line? the Sunday night after Fred Allen’s death. She worried about the danger of doing something that might be construed as being in bad taste.

“For me to have plugged a picture in front of millions of people grieving for Fred Allen would have been horrible taste,” she said. “Nor did I want to play any jokes with my voice that night. I told them, I’ll be there, but if you want to do a tribute to Fred and forget me, it’ll surely be okay with me.’ ”

As it turned out, Cyd didn’t have to mention the picture, because John Daly did. The panelists guessed her identity readily. Bennett Cerf said, “Where’ve you been, Cyd? I knew you were in town, and I’ve been waiting for you to show up for three weeks.”

Keeping it a secret that she was going to be the mystery guest on What’s My Line? was quite a problem, because it seemed that dozens of people wanted to entertain them that Sunday night.

When somebody asked Tony, “What are you doing Sunday night?” he managed to answer: “Well, we can’t do anything that night. Cyd’s busy.”

And if the invitation was extended to Cyd, she would say, “Tony’s busy.”

over the years, Cyd has studied French diligently, but she found on a visit to Florida with Tony that she hadn’t learned it well enough.

Three French hairdressers converged on her one day with greetings from Joe Pasternak, whom they said they’d just met in Hollywood. They kissed her hand and babbled gallantries and in general were extremely chic and Continental. They told her they had been assigned to do Grace Kelly’s hair at the wedding and would also, do the coiffures of the bridesmaids.

“They talked a great deal about ‘Miss Kellee’ and ‘ze salon,’ but that was about all the English they spoke.”

“So what did they want with you?”

“I never found out—because I couldn’t figure out with my poor pidgin French what they were saying.”

(Miss Kelly, it developed, hadn’t engaged them at all. Maybe they just wanted a better look at Miss Charisse.)

“One thing that worries me,” Cyd remarked, “is where this sexier Cyd Charisse stops.”

“Never mind where it stops,” replied this columnist. “Just be sure that it starts!”

Cyd saw no danger of it not continuing no w that Joe Pasternak has proved that she has the quality. For several years now, Joe has been assuring me and every other columnist who would listen that we’d discover one day that Cyd was not only a terrific actress, but a “real sexboat” as well.

In “Meet Me in Las Vegas,” Cyd’s S.A.— and that doesn’t stand for South America—was brought in forcefully but seemingly accidentally.

“It isn’t a strip-tease that I do,” Cyd insisted. “I’m a ballet dancer, very prim and very proper.

“I’m a ballerina that’s not very used to drinking and I get a little high. I see Dan Dailey going for the girls who strip so she—I mean I—get up and do the same thing!” In “Designing Woman,” with Jimmy Stewart, she is supposed to play a girlfriend of Jimmy’s. She’s a dancer and they go to Florida where he meets Grace Kelly. It becomes a triangle.

“I do not!” Cyd practically shrieked. “I mean bathing suit shots!”

With Her Serene Highness’ future uncertain now as far as movies are concerned, it’s been suggested by enthusiasts for Cyd that she take over the Grace Kelly role in “Designing Woman” if Grace decides not to come back.

“The story’s about a dress designer, that was to be played by Grace Kelly,” an M-G-M spokesman said. “We could probably just change the story around and have the dancer be the one who breaks up the romance and makes it a triangle.”

However, the studio made it clear that, if there’s any chance of Her Serene Highness getting back to work within a year, everybody’s willing to wait.

After all, how many chances do you get to have a real Princess emoting on the screen nowadays?

So Tula Ellice Finklea—that’s Cyd’s real name—is uncertain just now whether she’s going to be the new Grace Kelly or the new Cyd Charisse. In any event, she’s going to be a crisp, crackling new package of some kind, but the Hollywood Set hopes she won’t change her warm, friendly, sincere personality. Because they have many a nice story they tell about her, and frequently they add, “That’s the kind of a gal this gal is!”