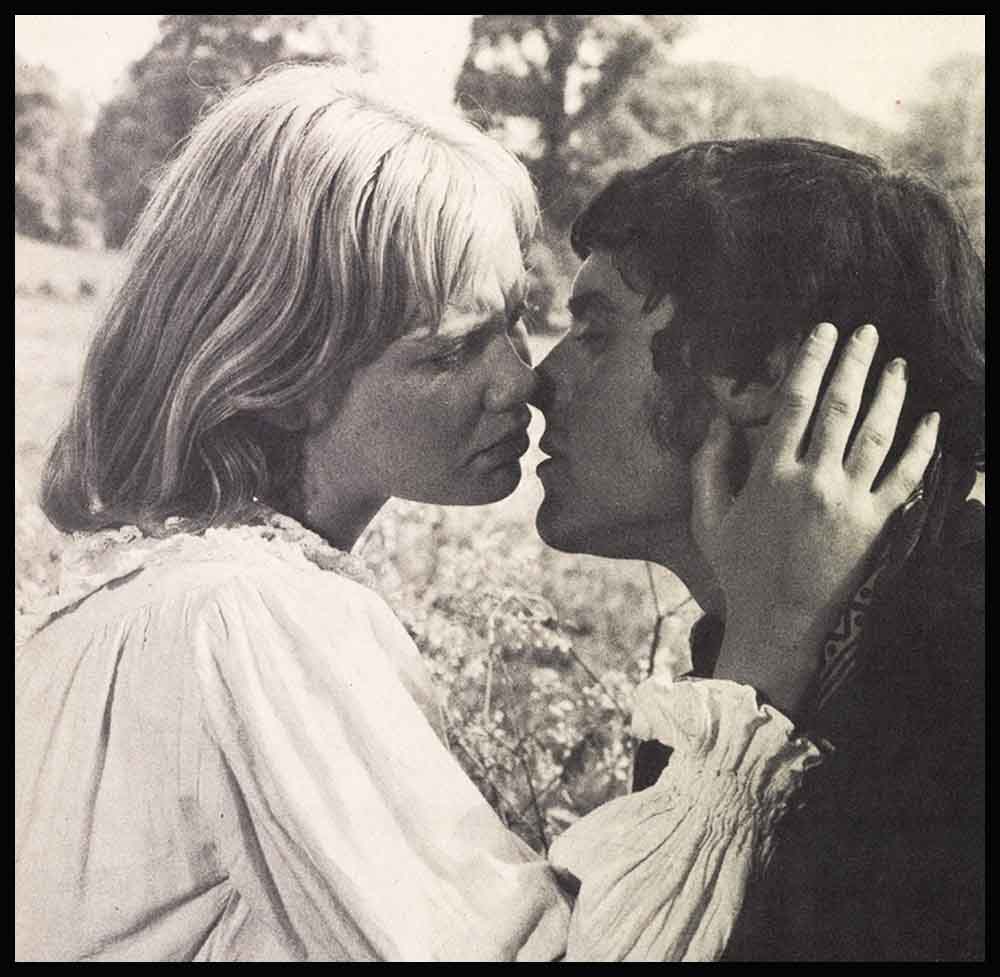 As far as lovely golden-haired Hayley Mills is concerned, she’s as “free as the wind now.” But nowhere in her future, that she talks about so optimistically, does a dashing young man figure in as a permanent fixture. Is she bored with romance off-screen as well? No, she has a “swinging time” dating just like anyone else, but Hayley does have good reason for abhorring love scenes. “There’s always the director to boss things and see that your noses don’t bump embarrassingly—or something like that. And both actors are so afraid of smearing their makeup. It’s Dullsville,” declares Hayley. Of course, her father was around directing the love scenes on these pages, making things a little more difficult for Hayley, who feels that love should be “secret and special.” And she frowns upon public necking, which would naturally make love scenes seem out of place.

However, she only has fond memories of her first off-screen kiss. She was 14, the boy 16; she can’t remember his name, only that he “looked like Frank Sinatra.” Five years have passed since her first kiss but she’s never let kisses lead to anything serious. “I’m sure Hayley has never been in love,” says sister Juliet. “She has never gone steady with any one boy. But I’m sure when she falls in love, she’ll fail all the way, just as I did.” (Juliet was already married when she was Hayley’s age.) That’s why she laughs at Hayley when she comes up with such statements as “I’m not going to marry until I’m 27 or 28.” True, it will probably be a while before she takes such a monumental step. Why? Because Hayley has a natural wisdom about life that goes way beyond her childlike impulsiveness such as buying lavish presents for those she loves, her absent-mindedness which is of great concern to her mother, and her recent stunt of dyeing her now shoulder-length hair red (went back to blonde in 24 hours) while vacationing in the South of France with her parents. “I know that Fm young for my age. But there’s plenty of time for sophistication in the years ahead. Fm afraid if I rush I’ll miss out on some of the little things on which maturity is built,” said a very wise Hayley. For the past year she’s been free to go out alone but her date life hasn’t run wild off camera. She’s too busy loving life, her family, her work to be impatient waiting for the mature love which will lead to marriage

“I don’t really care about sophistication. I think it is a bogus covering for a lot of blemishes that girls want to cover up.”

2- Hayley grew up around her parenfs7 friends—Sir Laurence Olivier, Noel Coward, her godfather—oblivious to stardom.

3- This is the Wick, the old Georgian Home on outskirts of London where the Mills children spent early childhood; the family moved back there last year.

6- Although her dad (a), Horst Buchholz starred with her in Tiger Bay, Hayley ran away with pic and won Berlin Film Festival’s Silver Bear award.

7- Whole family tripped to H’wood w. Hayley for Pollyanna; you can see the Mills‘ dose family life went on as always, at their rented home.

8- Hayley has always been a practical joker and thrived on “wrestling with Jonathan,” her younger brother; he’s no desire to act, yet.

9- Juliet, 19, wed American actor Russel Alquist, 25, in ’61; Hay ley was her maid of honor. She stayed at their California Home when she filmed The Trouble With Angels.

10- . Hayley doesn’t consider singing her forte but her Let’s Get Together sold 1/2 million copies; Summer Magic is her last album.

11- In Feb. of 764 Hayley had honor of being youngest star to have her hand and footprints in forecourt of Grauman’s Chinese Theater.

13- Hayley celebrated her 17th birth- day during the filming of The Chalk Garden; she was absolutely overjoyed with the suede coat her mom and dad gave her, and the Elvis (her long-time favorite) album was the livin‘ end.

14- Buglers from the R.A.O.C. trainees soothe Hayley after she muffed lines to open a fair.

15- Hayley, Peter McEnery had their 1st meeting in London before jetting to Crete to film The Moon-Spinners; they’re close friends.

17- Hayley became pals w. James MacArthur, his wife during Spain location for Truth About Spring. H. was mad about bullfighting, read up on it.

18- She has own car (a Mini-Minor) but Hayley’s usually Go-kart racing in Calif.—whole family’s gone on it.