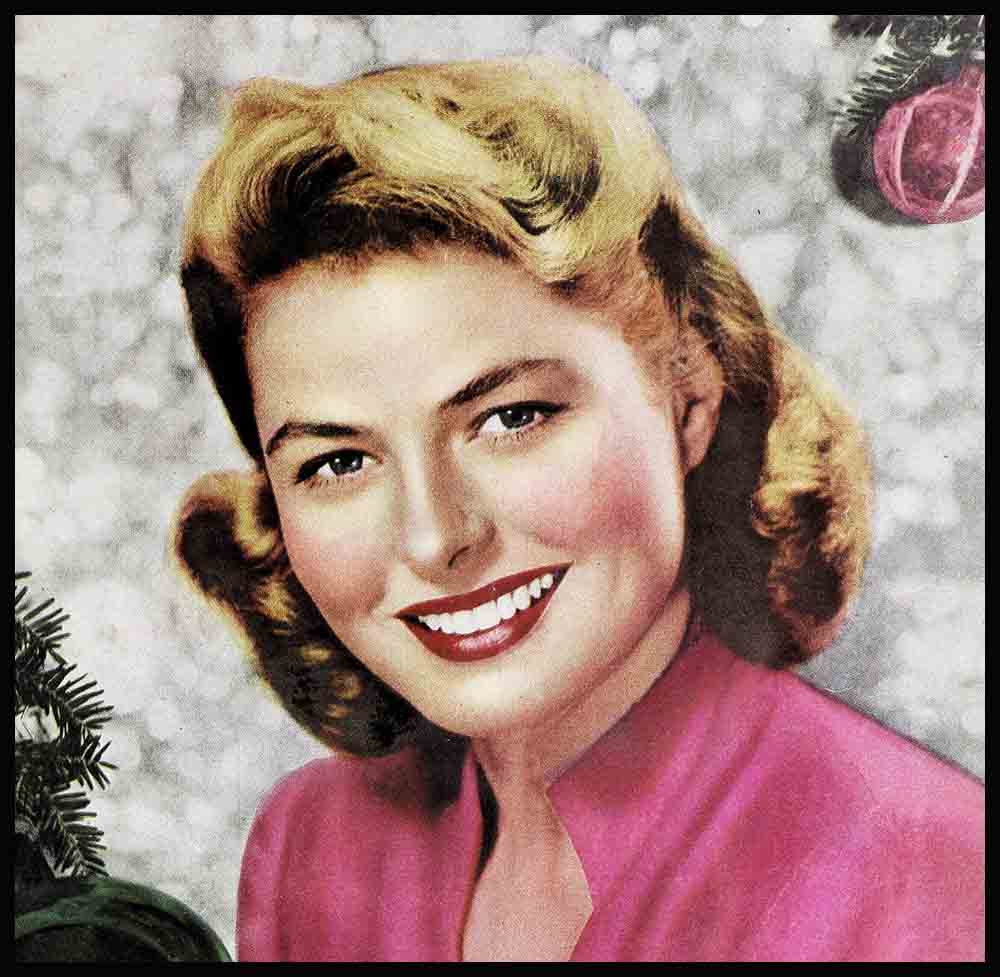 Personal history: Motherless at two, fatherless at twelve, Ingrid Bergman grew up with a family of cousins in Stockholm, Sweden—to win first an acting scholarship and then world-wide fame in the motion pictures of Sweden, Germany and (five years ago) America.

What fills her closet: Peasant clothes of all types—full-skirted dresses in every rainbow color; and bright embroidered blouses; and dozens of brilliant-hued buckskin moccasins. These last are flat-soled, handmade and trimmed with gay appliques in soft leathers. There are also camels-hair coats (every shade and hue) and evening gowns (ditto).

What she wouldn’t wear on a bet: Severe dresses, high-heeled shoes, jewelry, hats and severely tailored suits—particularly the latter! In the picture “Spellbound” her complete wardrobe was one tailored suit—and her complete attitude toward it was sorrow!

The outfit she’s symphonic about: An evening gown with a bouffant white georgette skirt and sleeves, a wine-red bodice—and wine-red velvet appliques tossed hither and yon on the floating skirt.

What she can cook the best: Anything Swedish. Swedish desserts, entrees, soups and salads appear like toothsome magic under her hands on the days when she pushes her cook out of the kitchen and goes to work herself.

Favorite flowers: Garden flowers—never hot-house blooms—worn gaily by every room in her house, but never worn by herself.

Pet between-meal snack: Ice cream—on sticks, in cones, or lolling on a saucer.

What she can do without: Dishonest people, unreliable people, artificial people and insincere people . . . and heavy classical music.

Music she’s entbusiastic about: Folk music of all kinds—such as Russian, Hungarian, Scandinavian, South American—and American cowboy songs. In short, she loves any music that’s characteristic of a country. She proves it by owning an enormous folk music collection of records and by singing folk songs whenever she’s around her house.

Favorite role: Out of Bergman’s ten American pictures, her pet role was the one she played in “Dr. Jekyll And Mr. Hyde”—in which, to her delight, she played a wicked woman instead of a fine one.

Pet form of entertainment: Never restaurants, movie theaters or night clubs—but parties composed of the friends she likes best, in her own home or theirs.

Proudest achievement: The successful combination of a fine career and a perfect home life.

What she wants to be doing when fifty: Exactly what she’s doing today—acting in Hollywood films and living in California with her hard-working husband Dr. Peter Lindstrom and her daughter Pia, who is now six.

What she really looks like: Well, she swings along in her charming peasant clothes with her honey-colored hair shining in the sun, her face lightly tanned, her cheeks red

I with natural color, her mouth pink—and men don’t whistle . . . they sigh wistfully and watch her till she’s out of sight.

Ideal home: She just moved there. It’s a sand-colored farmhouse in Beverly Hills, surrounded by a large garden filled with trees and flowers. inside and outside it’s comfortable—and minus the Hollywood musts of swimming pools, tennis courts and chromium bars. Her ideal home is a home.

What she’s like as a housekeeper: She’s effortlessly efficient. Her house is spotless, her two servants at once remarkably able and remarkably happy, and the meals are worthy of some sonnets to the Scandinavian!

How she begins her day: She leaps out of bed at eight o’clock mornings when she’s not acting, fresh from nine hours of sleep. Fifteen minutes later she’s seated before a breakfast consisting of fruit juice, coffee and toast—and fifteen minutes after that another violently active day has begun for Ingrid.

Just for the record: She is five-feet-seven-inches tall, weighs 118 pounds, has blonde hair and dark blue eyes.

Only ornament she wears: A tiny pin-on watch.

Happiest moments: When she’s busy—which is every moment she’s awake. You’ll find her playing her piano, or swimming, or playing tennis, or riding horseback, or taking long walks, or listening to her folk-music collection, or reading—every second when she isn’t overseeing her house or tending to her career.

Only annoyance that fame has brought her: Autograph hounds—who embarrass and detain her when she’s attempting to lead her private life in public.

Things she likes that other people loathe: Having her hair done daily when acting, costume fittings, working overtime or on Sundays, getting up early, planning meals, wearing a wig in “Saratoga Trunk”—and having her hair cut off for “For Whom The Bell Tolls!” The things that outrage other people make Bergman only smile and shrug.

What she hates that other people love: Being fussed over—only this crisis never comes. Bergman’s not the type!

How she spent her first evening in Hollywood: Thousands of miles from her home in Sweden, she sat down to dinner at a Chinese restaurant in Hollywood—and then met her producer David Selznick. Then she wrote a letter home to her doctor husband in Sweden!

Favorite chore: Shopping—whether it’s for groceries, household bric-a-brac, records, books, or presents for her friends. She loves to drift from store to store until she locates exactly the right thing. Then she pounces on it and carries it home.

Biggest thrill: Sitting in a Hollywood projection room as a famous star, watching her father’s home movies made many years ago unreel before her—of her first twelve birthday parties, of her family in far-away Sweden in far-away times. Never before had she seen these movies, for there was no way for the Bergman family to show them. Never before in her memory had she seen her long-dead mother.

What her diary is like: It’s unique—for it’s completely on film and filled with other people, not herself. She owns both a movie camera and a still one, and wherever she goes she takes pictures—particularly of her daughter Pia, whose entire life so far is written in celluloid.

That addition she wants to build on her house after the war: A projection room—where, at last, she can run off her own movies and others at the flip of a finger.

Most important year of her life: 1937—when she married Dr. Lindstrom, whom she had known for several years—since he had been a medical student; and when she made two movies in Sweden, acted in two stage plays there for the first time in her life—and got her first offer from Hollywood.

What she doesn’t suspect about herself: That she is the happiest person in Hollywood—because she is thoroughly self-reliant and adjusted to life; because she is dependent on no outside influences; because she knew from childhood what she wanted and she worked quietly and steadily at getting it. Of all the citizens of Hollywood, Ingrid Bergman is the most mature.