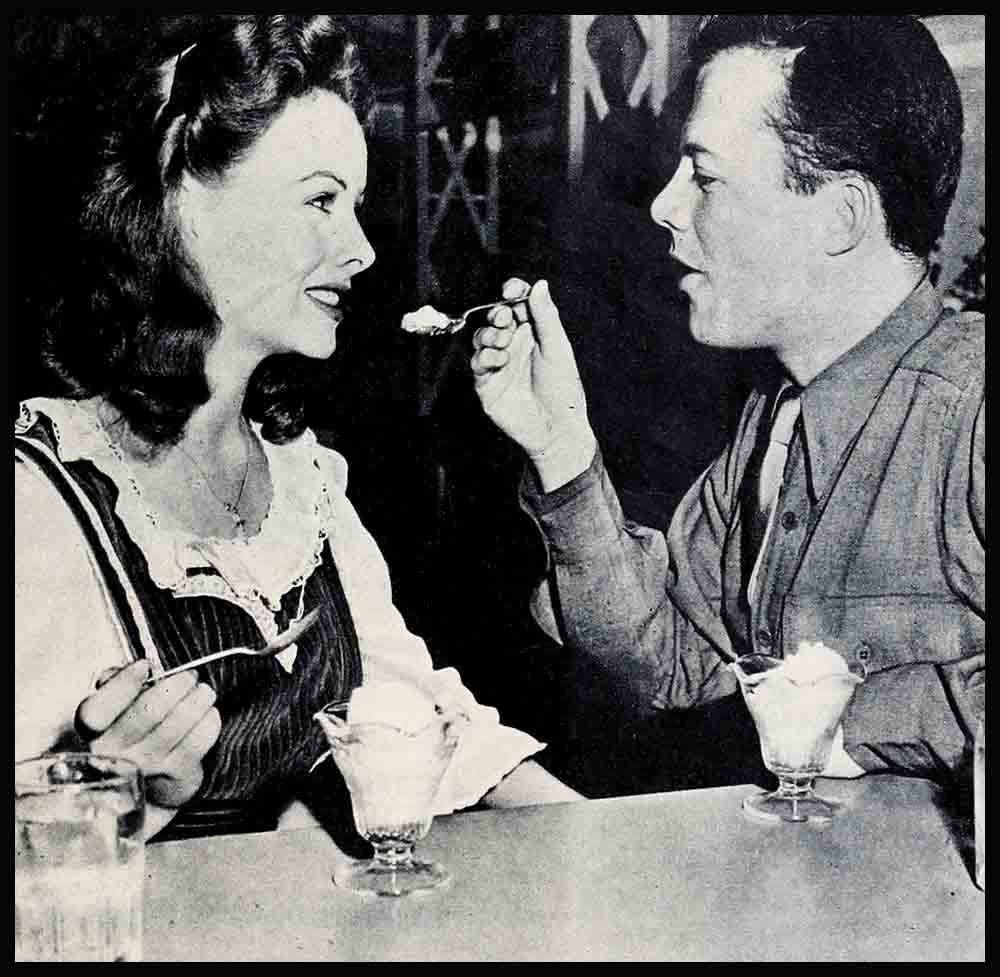 Since I’ve been back in town, Jeanne Crain and I have had a lot of fun reading about our “romance.” We’ve read that we’re about to be married, then that we’re separating. It’s all very amusing. Jeanne is one of the most wonderful girls I’ve ever known, but frankly, we’re not contemplating marriage, nor are we engaged, nor are we even “hot and heavy,” as one writer intimated.

The truth is—I’ve been out with Jeanne very few times, excluding luncheon dates. The premiere of “Wilson” was the first planned date we’ve ever had.

Jeanne has spent several week ends at my home, but I’m sorry to confess it wasn’t a romantic interlude. She came down to swim and eat and listen to records. She likes Mom’s cooking! Another time we went to dinner and a movie. The studio was actually responsible for our meeting when we made “Home In Indiana.” Naturally, when we were on location we had our box lunches and dinners together, but as far as any real “dates” were concerned, we just didn’t have any.

I had lunch with Jeanne the first day I worked in “Winged Victory.” We had a good laugh at all the stories that have appeared in the papers. One of these days, if I can promote a couple of passes now and then, we’re going to try and catch up on some of these dates we’re supposed to have had. Because, intriguing as the idea is, I’m in the Army now and not exactly a free agent. Besides, there’s the money angle.

After the allotment check to my mother and my insurance are deducted, I have about $21 a month left out of my salary. I have to live on that. And it takes a bit of doing. Because occasionally the best laid budget plans go berserk. Even a G.I. is human! Like the night Nancy Walker and I had a date, right after I got back to town. Mother had thoughtfully invited Nancy down for dinner. The cost of eating out these days is awful! And anyway, Mother is a wonderful cook. After dinner, Nancy and I decided we’d like to go down to Venice—the beach that has all the concessions—which is my favorite haunt.

We had a wonderful time. We went on the roller coaster, took in the fun house and ended the evening by two goes on the bamboo slide. You know what that is—the fellow and girl sit on the same gunnysack and slide down like mad. It’s sort of silly, but really a lot of fun. We couldn’t resist the second slide and we were really happy when we left the beach. But when I got home and began to take a reading, it wasn’t quite so funny. I’d spent about $8 out of my $21!

Actually, since I’ve been in the Army, I’ve had little time for dates, other than occasional post theater excursions with a bunch of the fellows, or a “night out for dinner” at one of the service clubs.

When I was taking my basic training at Camp Crowder, Missouri, I was quite literally dateless. I was out of the camp only twice during that initial six-week period, once to sell Bonds and again to spend a lonely week end in Joplin, Missouri.

After basic, I went immediately into a WAC Recruiting Program which toured the 7th Service Command. We played colleges and universities where girls could be told the advantages of enlisting. And although I was with beautiful girls from the opening night until the first of June, I had few dates. Not because I didn’t want to, but for the rather dull reason that I had no time. We played one-night stands throughout Missouri, Kansas, Iowa, Nebraska, Minnesota, Colorado and Wyoming. When we weren’t on the stage, we were moving scenery and traveling by G.I. bus to the next stop.

There was one memorable experience, though, in Northfield, Minnesota. We stayed at a small hotel on the bank of a river. After the evening performance and a late supper, I decided to go fishing. It must have been about one in the morning. Downstream, a few hundred feet, a carnival had been set up and lights reflected wonderfully in the water. We sound of the calliope drifted through night and it was as romantic a setting anyone could want. But I was alone.

Suddenly, almost out of nowhere, a girl peared. She was slight, had whitish hair and a very soft Bergman-ish recent. She sat beside me and we talked. Fished together. Mostly we talked the war—and of her fiance in Italy. Of the importance of being true to person. We talked of all the girls waiting. And of all the soldiers waiting. Discovered what idealism there can be a girl who has been waiting two years! In Kansas City my roommates, Corporal Nat Lund and Sergeant Bill Law and I dated one Madeline McCallister, mother. We dined at the Hotel Continental and danced to the music of “I’ll Seeing You” and “Easy To Love’’—my favorites. Afterwards we walked from city limit of Kansas City to the other, curatively speaking, and midnight at a side-street beanery. It was very reminiscent of one of my last lights in Hollywood, when I walked from Hollywood and Vine to Santa Monica, ending at Barney’s Beanery, one the old gang’s hangouts.

At Fort Des Moines, we entertained thousand WACs. Among them sound an old friend, Pfc. Jo Rainey who, before the war, was Jane Withers’ private secretary. I really splurged that night. Jo had I met after the show and dined a la Hollywood—eight courses, candlelight and the trimmings—at a nearby roadhouse. I knew I couldn’t afford it, but I was so had to see Jo I felt we had to do something special. And, too, I knew she had been going through a pretty intensive training course and hadn’t had much time for fun. And it was worth it! We talked about the old days and planned the new. And then we parted. We have a date to meet in Hollywood as soon as we’re both discharged.

My last night with the WAC Recruiting gang was spent at the Red Cross Canteen at the Omaha Airport. Our commanding officer, Major Bruce McCullough, the six WACs with the show and all of my fellow G.I.’s escorted me to the plane. We toasted everyone—with hot chocolate! And wrote our names on the walls of the Canteen. When the time came to leave, we were all abashedly sad. Suddenly, I hated the Army for forcing me to leave such good friends. But in my next breath, I had to thank the Army for giving them to me in the first place.

Then I was ordered back to Hollywood to do “Winged Victory.” And the most horrible thing happened on my first free night. I was to attend a party that Gene and Betsy Kelly were having! But when I got home, it was so good to see my own bed that I decided to catch thirty or forty minutes’ sleep before the party. I awoke at seven in the morning! I never have recovered from my embarrassment. The worst par t of it was that I was supposed to take Nancy Walker. If she weren’t so good a sport, I don’t suppose she’d have forgiven me.

When Jeanne and I went to the party Elsa Maxwell gave after the “Wilson” premiere, we were as naive as any fans ever were when we saw Tallulah Bankhead there. We both wanted to meet her, so I wangled an introduction. We weren’t at all disappointed, either! The Bank-head Legend is genuine, I’ve found out.

When a fellow unexpectedly gets back to the home town, sometimes the younger girls have grown up so suddenly you don’t recognize them. I didn’t know Virginia Weidler, who’s a regular deb now. It was fun finding Gloria De Haven a glamour star. Gloria and I went to high school together and she’s the kind who is as loyal as she is beautiful. I had a date with her for the alumni meeting of Mar-Ken, the actors’ high school we attended when we were just kids dying for picture breaks. Yes—Gloria’s a charmer!

It’s been fun bumping into old friends. I admire Montez and had a chance to teli her I first met Jean Pierre Aumont when we both still had our first Hollywood roles ahead of us. Tech. Sgt. Dave Rose, who did the music for “Winged Victory,” ran out of gas just as I was coming along the other day and naturally I was glad to see him—and June Allyson, who was with him.

Well, that’s the rather uninteresting account of my G.I. dates. It’s not nearly as glamorous as those I’ve read about myself. I only hope that when folks read those too exciting accounts of how Jeanne Crain and I have been Mocambo-ing, they’ll picture us instead nine times out of ten, sipping an ice-cream soda at Schwab’s Drug Store after the movies. Frankly, I’ve never taken a girl to a flossy night club in my life. I’m not very keen about dancing and that kind of an atmosphere has never had much appeal for me. Also, I hope people will remember that I’m just a G.I. Joe now, and while my assignment on “Winged Victory” is a good one and has enabled me to see a lot of my favorite people, like any other good job in the Army, it can’t last!