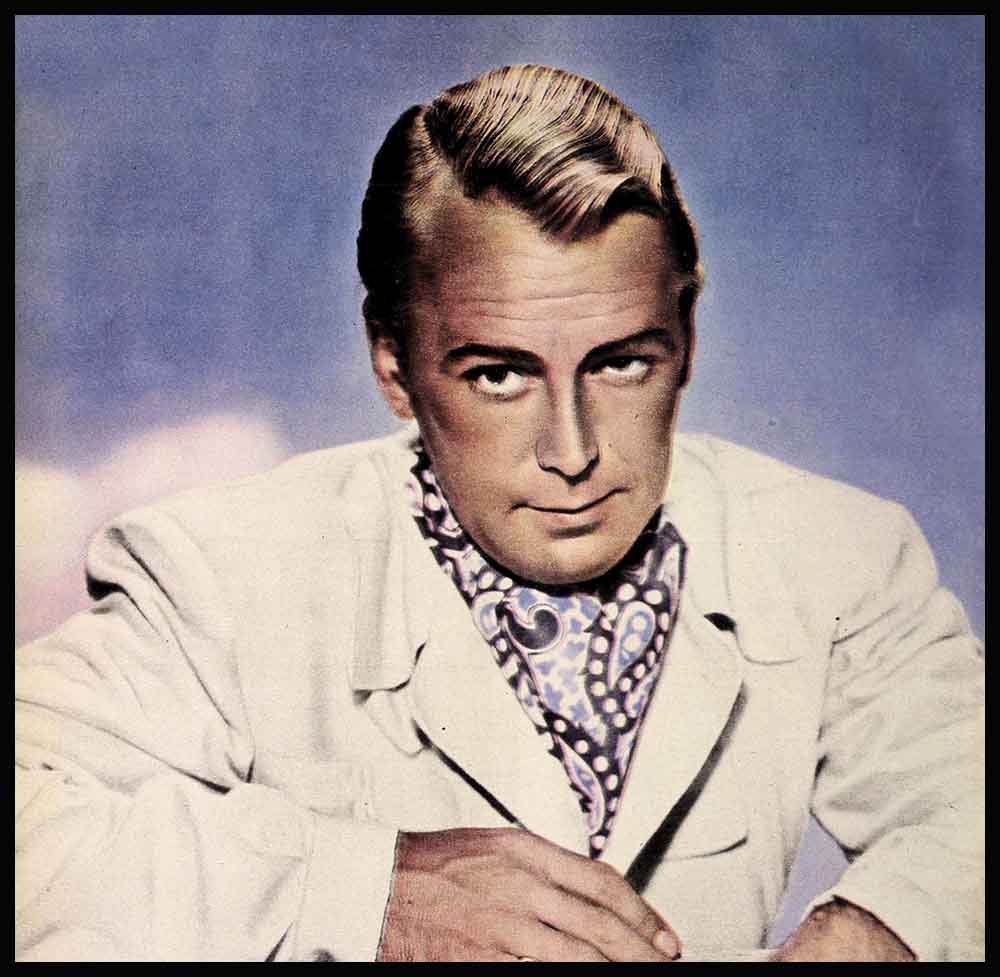 The scowl. This happens

. . . when he’s in the midst of a group of fast-talking, would-be clever women, anathema to the Ladd simplicity;

. . . when Sonny Tufts is taking him over at his favorite game of gin rummy;

. . . when he hears the news of the latest Hollywood marriage breakup. He believes in marriage, is proud that his is a constructive, successful one.

The sentimental look. This occurs

. . . when you catch him in a toy store, picking out a woolly dog for his miniature heart interest, two-year-old daughter Alana;

. . . when you spot him in a florist shop, buying some new plant for his ivy-loving wife, small dark Sue Carol;

. . . when he’s off guard, staring at his ruby quartz ring, birthday gift from Susie and always on his finger;

. . . when from across the room he catches the eyes of Sue—his wife, the person who is his home, his happiness and his heart.

. . . when his doorbell rings and he opens the door lo Kay Kyser and Georgia Carroll, among the Ladd’s very best friends;

. . . when you chalk up compliments for his newest, nicest tie, his one personal sartorial indulgence;

. . . and when, of course, he sees roast pork and chocolate cake appearing, his two favorite foods.

The serious look. This you’ll see

. . . when he’s talking about his newest role. He takes his acting seriously, is ever ready to discuss improvement in his work with his director, coworkers—or you;

. . . when, of a Saturday afternoon, he’s pounding a hammer, repairing small Alana’s screened-in play pen that he built himself in the back yard of the ivy-covered square Normandy house;

. . . when he’s reading. Since, in his busy day, he seldom finds time for a book, he reads himself to sleep every night, choosing from the papers, magazines and books piled high on the table beside his bed.