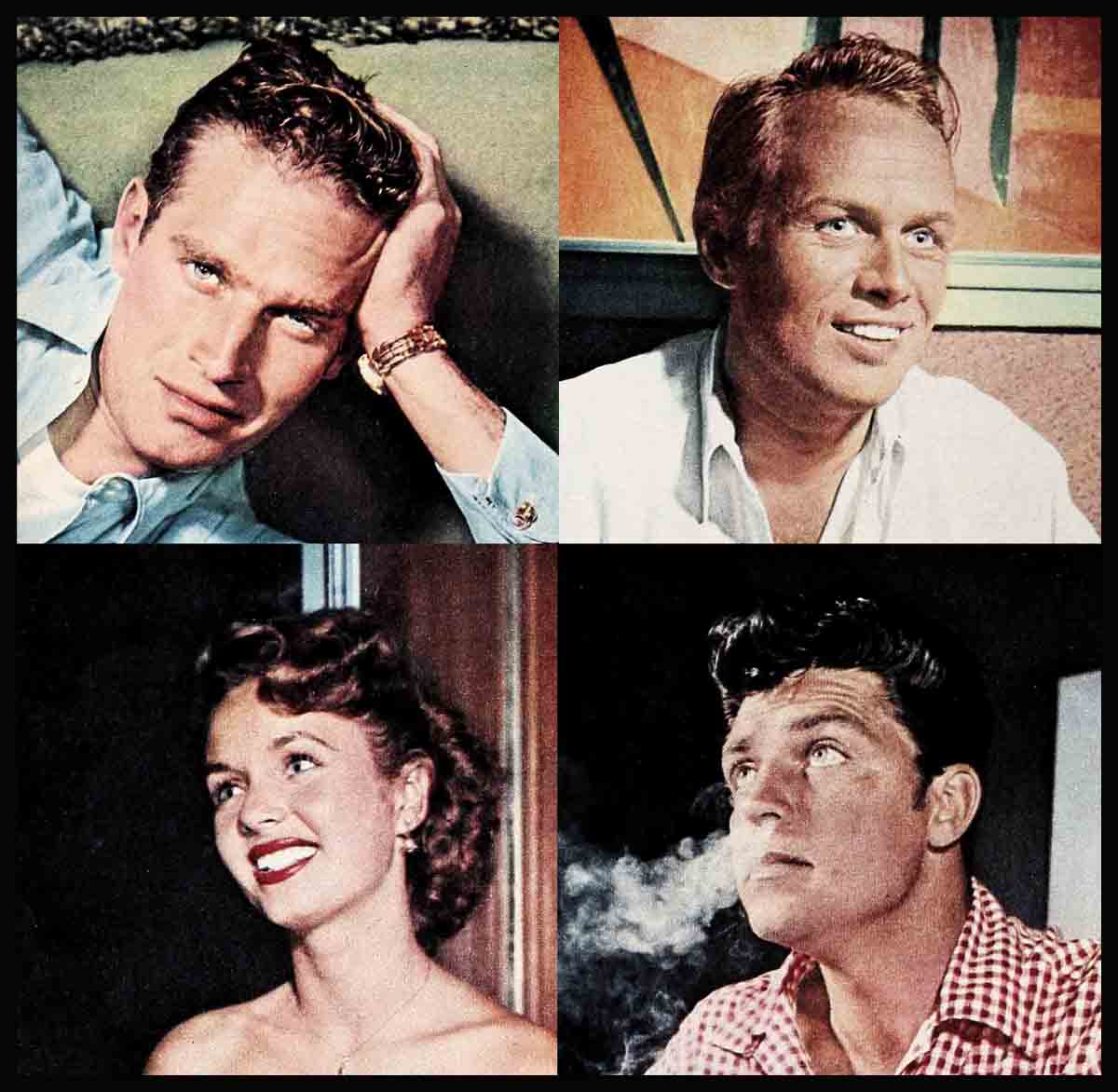 Twos in the News: Tony Curtis and Janet Leigh now double-date with Donald O’Connor and Marilyn Erskine. They go for those Japanese dinners where you sit on the floor yogi fashion and eat sukiyaki—with your shoes off! . . . Marilyn, by the way, gave Donald a ring in return for the one he gave her—a black sapphire . . . Being in love can make you nervous, which Jane Powell was the night Gene Nelson made his dancing debut at the Cocoanut Grove . . . Now that Joanne Gilbert and writer Danny Arnold have announced their engagement, Tab Hunter’s looking towards Piper Laurie.

Behind the Scenes: Shelley Winters insisted that Suzan Ball visit her in Canada where she is working with Alan Ladd in “Saskatchewan.” Suzan’s the young actress who almost suffered a leg amputation from bone tumor, but modern medical care and her own faith saved her. Shelley thought the splendor and quiet beauty of Banff National Park, and seeing boyfriend Dick Long, who is also in the picture, would have therapeutic value. She even shared her room with Suzan to save her money. Of course, Alan Ladd is there with his Sue and their brood . . . Joan Crawford says she sang for herself in “Torch Song,” but studio scuttlebutt says India Adams did the dubbing. Either way, Joan’s been coached by expert Harriet Lee, who taught Jeff Chandler how to belt out a ballad. Joan and Jeff are dating but, contradicting those who say it’s serious, insist the most they have in common is their monogram! . . . Richard Widmark’s first film away from his home studio, Twentieth, was “Take the High Ground,” which pleased M-G-M so much they are borrowing him again . . . On location in Banff, Marilyn Monroe tore a leg ligament during a scene in “River of No Return,” Co-star Bob Mitchum promptly dubbed her “Hop-a-long Monroe.”

Home Sweet Home: Charlton Heston already holds leases on apartments in New York, Chicago and Hollywood. He owns fifteen hundred acres in Michigan and now he’s fallen in love with Bermuda where he played in “Macbeth” this past summer. Yup, he’s leased a place there too . . . Rock Hudson, still in bandages from that broken collar bone, got evicted when the house he rented was sold. Pals pitched in and helped him move into a hilltop home with the most fabulous view in Hollywood. “It’s perfect,” beams Rock, “Except there’s no road to reach it!” Eagles please apply.

Kiddie Corner: Liz Taylor and Michael Wilding took the baby to England to meet his paternal grandparents, cabled an SOS to M-G-M. Of all things, they forgot to take along rubber jiffy pants and couldn’t get them over there. While abroad, Liz made a flying visit to Rome and the famed Fontana Sisters’ fashion salon. Her new gown is called “Ask Your Mirror” . . . Celebrating his daughter’s first birthday, Dale Robertson took her out for lunch. He treated the birthday girl to, of all things, a hamburger!

According to Cal: When Gary Cooper’s wife and daughter returned from Europe, Rocky reported to friends that she and Coop talked for endless hours about their marriage. Net result: no reconciliation but a continuation of their separation . . . A sad John Wayne sent word to his four children letting them know that he hates to humiliate them but it may be necessary, because he’ll “tell all” to protect himself from Chata Wayne’s demands in their divorce trial. Says John: “I hope not, but it may be messy!”

Nice People: Remember wonderful John Ericson in “Teresa”? Well, when he finished playing opposite Elizabeth Taylor in “Rhapsody,” John married Milly Coury, a sweet radio songstress. Their good friends, Lori Nelson, Bob Arthur, Pat Crowley and Tab Hunter, all pooled their money and rented them a honeymoon cabin at Palm Springs. Nice wedding present! . . . And speaking of wedding presents, Ann Blyth asked Cal to tell her fans that she’s personally writing the thank-you notes. Which is why it’s taking her so long to tell you how much she loved your gifts to her.

People and Places: Jane Russell would have to be out of her beautiful mind not to sign that new RKO contract. Executive Howard Hughes is offering her everything but the moon! . . . Arlene Dahl and Fernando Lamas got a stage offer that has them beaming and their agents screaming. There’s more money in Hollywood . . . Farley Granger tells European correspondents that he hopes to be a father before he’s thirty. The young man means, of course, he wants to get married!

Once Upon a Time: Ray Milland was a Hollywood agent with one lone client named Eunice Quedons. Later on she became—Eve Arden . . . Marcia Henderson who played opposite Jimmy Stewart in “Thunder Bay” was the head of his fan club in her native Massachusetts . . . Steve Cochran worked as a doorman in a Hollywood theatre that now runs his pictures . . . Marilyn Monroe applied for a saleslady’s job in a Beverly Hills smart shop, was told to come back when she had more experience. So she went back recently—and bought an expensive evening gown!

Night Life: Doris Day with husband Marty Melcher at Vic Damone’s Mocambo opening: “This is our first night-club date in three years. My feet couldn’t wait for me to take them home and get the shoes off!” . . . And diners at Ciro’s will never again be bothered by seeing pink elephants! They saw James Mason walk in with his little daughter Portland, who was more wide-awake than anyone at midnight.

Homecoming: Advance reports reaching Hollywood insist that Pier Angeli’s way home will be well-lit by the torch she is toting for Kirk Douglas . . . Annie Baxter returned from Europe where she filmed “Carnival,” wearing a Dior outfit with its just-below-the-knee skirt length. Asked whether she liked the new style, Anne replied, “It’s the fashion. What can I do?”

Just for Laughs: Martin and Lewis who knocked them cold at New York’s Paramount Theatre: “In Hollywood if they like you they give you an Oscar. In England, if you’re lucky—a wet tea bag!” . . . Bob Hope at the London Palladium: “Travel is good for everyone. Anyway, it was time that I came back here for a change—in fog!” . . . Scott Brady devised his own method of discouraging gabby females who nail him at parties. “I merely cup my ears and make like I’m very hard of hearing.”

Medical Report: June Haver returned to Hollywood from the convent of the Sisters of Charity on orders from her doctor and religious leaders. She had been ailing for several months but hopes to regain her health soon. Her plans to return to life in the convent are not definite.