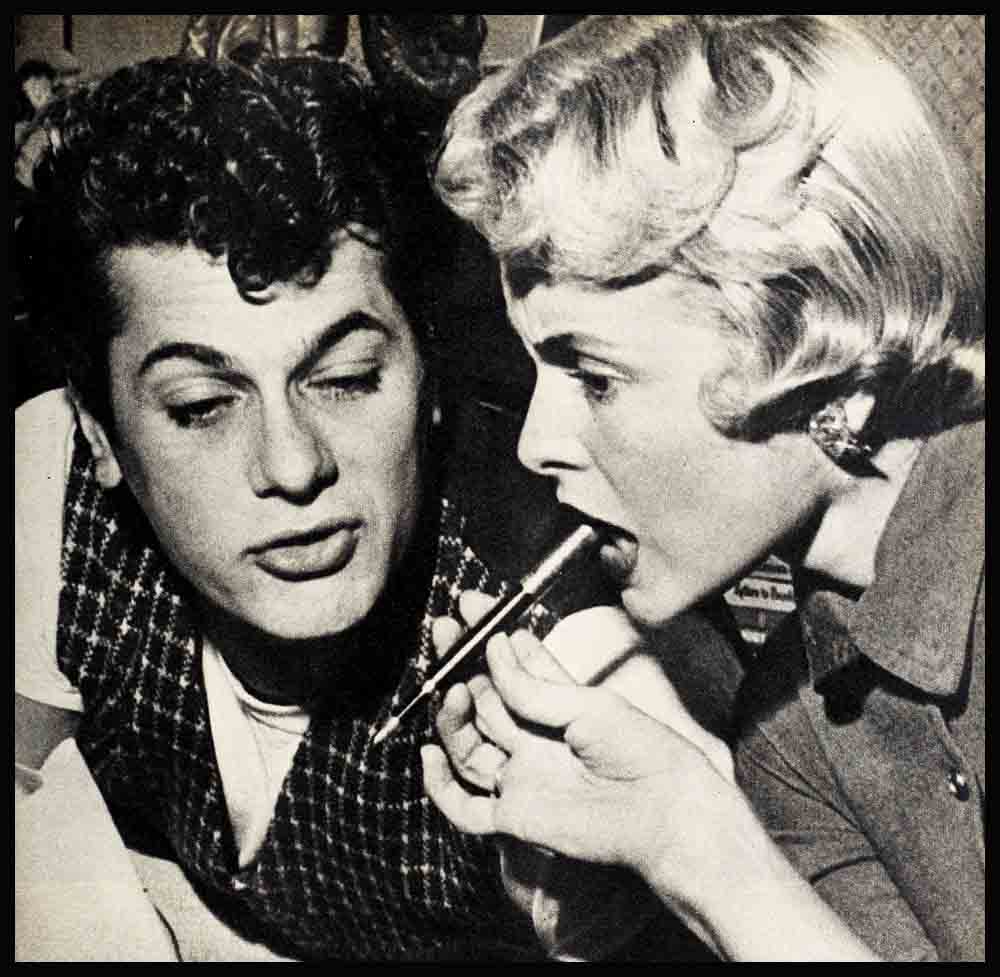 The Threat To The Tony Curtis—Janet Leigh Marriage

A FEW WEEKS AGO, a recently-divorced actress in Hollywood was casually scanning the grist from the day’s gossip columns. Suddenly, her attention focused on an item and froze there as she read:

“What’s with the Tony Curtis-Janet Leigh marriage? At a party last night, Janet kicked Tony so hard on the shins he had to sit down the rest of the evening.”

The actress read the printed words again. She had been to the party mentioned and knew the item wasn’t true. What’s more, as a friend of Tony and Janet she realized how much in love they are, how happy in their marriage. But what of the others who read it, those thousands who don’t know these two kids personally as she does?

Perhaps she was thinking back on her own Hollywood marriage and the myriad problems and pitfalls, rumors and gossip that beset it. She mused, half aloud, “Why can’t they let them alone? Will Hollywood wreck their marriage?”

Tony himself has recently been giving serious thought to these questions.

“Sure,” he admits, “like any other married couple, we have our little differences. Maybe I don’t like a dress Janet likes; sometimes it’s a movie we disagree over. And I always tell her what I think. But that doesn’t mean our marriage is on its way out. Not by a long shot.

“The only way two married people can get along is to let off steam occasionally. It’s good to get your opinions out in the open, it clears the air. But even while we’re doing this, we never forget we’re in love and have each other.”

Tony and Janet feel—and admit—there will always be marital problems they must solve. Like insignificant domestic rifts that suddenly become amplified in importance when they find their way into print. Economic problems that arise from that illogical American tradition, prevalent especially in Hollywood, of “keeping up with the Joneses” whether you can afford it or not. And keeping two careers in the same family free from conflict.

Being human, they’ve found too, it isn’t easy to be a movie hero or heroine twenty-four hours a day. But long ago, they recognized all these threats to their marriage. And everything is under control.

Everything, that is, except irresponsible gossip that snipes at their marriage. This, Tony believes, is the most dangerous of all.

Tony is a nice, even-tempered guy. His friends, his employer, his co-workers and the press will all vouch for this. Especially reporters, who find him always cooperative, always frank. But he grows adamant when he talks of the things that disturb his happiness with Janet.

“You come to expect a few rumors,” he says, “and certain stories have always made spicier reading than others. But this latest lie about Janet kicking my shins was ridiculous.

“Maybe I’m sounding off, but you be the judge,” he says, as he recounts what really happened at the party.

While working out some stunts during the filming of “Houdini” at Paramount, in which he and Janet co-star for the first time, Tony suffered a sprain and fracture of his foot. The injury was more painful than serious and rather than disappoint the people who invited them, Tony went to the party in question, despite the pain he felt. Tony is like that—he seldom disappoints a friend.

Once there, he moved about for a while, greeting friends. But at one point, Tony felt the pain in his ankle becoming so acute that he had to sit down and rest.

It was as simple as that. Yet the incident gave rise to printed speculation that not only had Janet kicked Tony and caused the injury, but that their marriage itself was in jeopardy!

“Sure, I was upset,” Tony continued, his usual smile now replaced by an expression of dead earnestness. “In the first place, when two people really split up, it’s not just because of one argument they may have had at a party; it’s usually deep-rooted and has to do with more than one night’s incident. Our friends know us so well that they don’t believe these things. But what about those who don’t know us? How can we make them understand?”

In Hollywood, Tony has found, success sometimes has a way of backfiring. In his own case, it is ironic that the town which brought him so much he is grateful for should now supply the ingredients to give him concern for his married happiness. Gossip, he feels, is the most serious wrong of all, but there are other problems and here is how Tony and Janet meet them.

“When you’re a movie star,” Tony explains, “everyone thinks you make astronomical sums of money. They read about the salaries of top-bracket actors and think every actor is well-heeled. Gee, Janet and I are practically newcomers in this profession and don’t make nearly as much as people think we do. Yet some expect us to live by a Hollywood code that doesn’t fit us, either economically or emotionally. When we make compromises, they don’t always understand us.

“For instance, we occasionally hear the accepted thing for movie couples to do, when one person is away on location, is for the other to go out with someone else. But the fact that we don’t do it doesn’t mean either of us is jealous and doesn’t trust the other. I stay home when Janet is away because I have no interest in anyone except my wife. Maybe we’re old-fashioned, but our parents operate this way, and why shouldn’t we?”

As for “keeping up with the Joneses,” Tony and Janet don’t even try, thus eliminating at once possible financial pitfalls certain other Hollywood marriages have fallen into by living beyond their means.

“We don’t own a home yet and I can’t give Janet a Cadillac. We know .what we can afford and we live within our income. According to certain Hollywood standards, maybe we do fail short of what’s expected of us as stars maintaining our proper place. It’s a temptation, but we won’t do it on the cuff. We believe, any way, that a happy marriage is not based on such material things but rather on the experiences we can share together every day as individuals.

“Another problem is that everybody is full of advice for us,” Tony avers, “some sincere, others not. And if you don’t listen, right away they start saying you’re taking it ‘big.’ So we listen. Then do what we like—and sometimes get criticized for it. But by making up our own minds, we take full responsibility for whatever we do. And after a while, you come to find out who are your real friends, whose opinions and advice are sound.

“To me, our friends are the most valuable things we have and we choose them, carefully. They’re not just my friends or Janet’s friends, but wonderful people we both enjoy. Some are in show business, others aren’t. Some earn more than we do, some less. But you can’t be happy if you have only wealthy friends; it warps your sense of values.”

It has been pointed out in the past that in Hollywood two screen careers within the same family can be dynamite, leading to unhappiness, jealousy, even divorce. And while this may be a hazard peculiar to some Hollywood marriages, Tony is confident it will never threaten his.

“It may be a little more difficult at times because, no doubt about it, one career is easier to run than two. But I believe two people with careers can help each other if they recognize their problems and use judgment. There are just as many examples in Hollywood where two careers I are working in the same family as examples of failure.

“First of all, you must remember that the other career you’re concerned with belongs to a person you love, so at once it becomes more than a professional interest you hold in it. People in our business are high-strung; that’s why we become actors. And for this reason, sometimes it’s hard to be coldly honest instead of purely emotional. But if you’re really honest with yourself at all times, two careers can work and to advantage.

“For instance, Janet and I have just finished working together in ‘Houdini’ and it proves my point. Janet is a good actress and it helps any actor’s performance if he plays scenes with someone who’s responsive and whose ability he respects; all the scenes play better for that understanding.

“There was another big advantage, too.” Tony now smiled, a twinkle in his eye. “I was probably the only guy at Paramount who had a leading lady to clean up his dressing room.”

These days, there are no crises in the lives of Tony Curtis and Janet Leigh, occasional gossip to the contrary.

One day, Tony confides, they would like to replace their cheery apartment with a home of their own which they’ll enjoy decorating together. And a family that goes with it. “We certainly want both,” says Tony, “but we don’t set a schedule for ourselves. We say whichever comes first will be right and wonderful.”

As for those pitfalls to Hollywood marriages, Tony is more determined than ever that they shall not threaten his own. “By living in Hollywood and being in pictures, the problems of marriage are perhaps magnified more than if we lived in another community,” he explains, “but basically, they’re the same everywhere. In other towns, word-of-mouth gossip causes the same concern to people there that we feel here whenever we see a false story printed about ourselves.

“I feel a man is entitled to his own idiosyncrasies, his own way of life with his wife, whether he’s an actor or anybody else. I don’t question the way anyone else lives. I don’t see why they should question my way. That’s why no one should take me to task, stir up troubles where they don’t exist.”

So the next time you read anything to the contrary, just remember:

Tony and Janet are two talented, intelligent youngsters, crazy in love; and nothing, not even Hollywood’s often puzzling ways, is likely to alter that fact or their marriage.