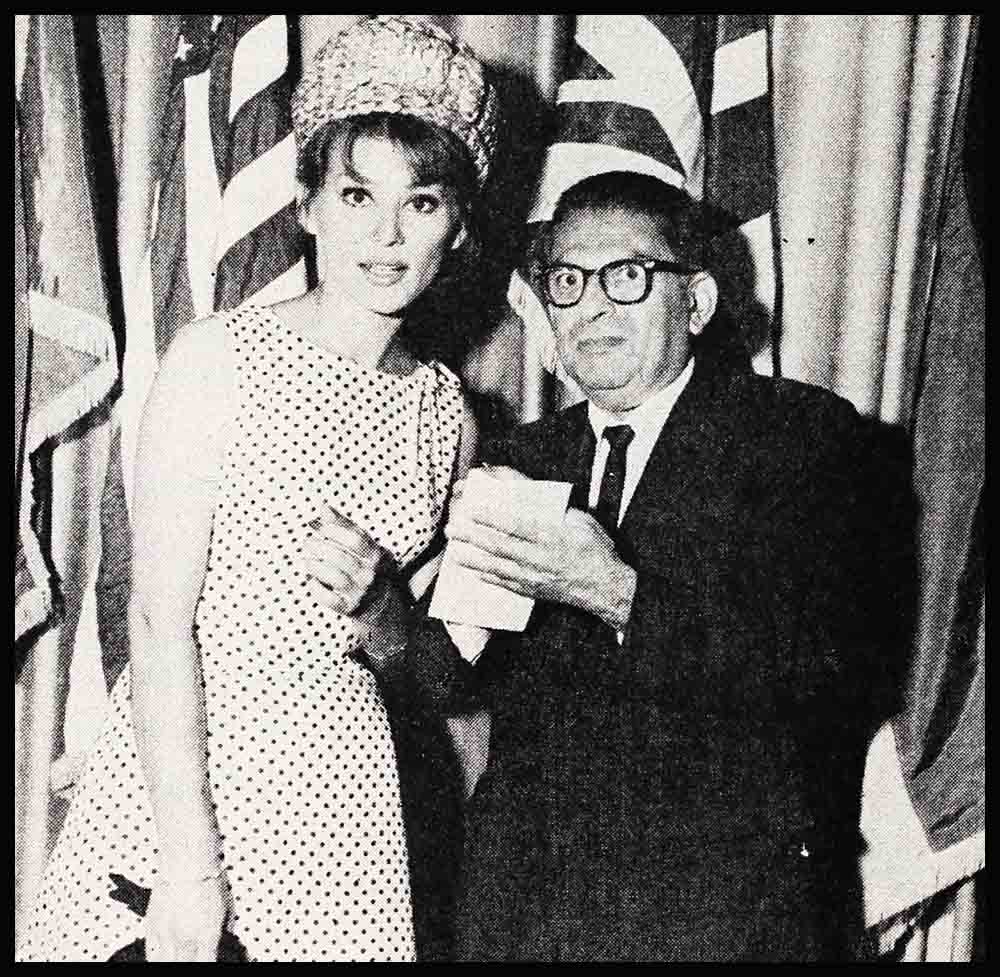 It is sad and tragic, but there is a breed of singers who never achieved true greatness until the Iyrics of their songs had acquired a meaning pertaining to their lives. Judy Garland was popular, but she never had a following of frantic worshippers until the innocent school-girl Iyrics of “Over the Rainbow” related to the sad young woman who sat in front of the foot- lights and whose voice longed for the happiness she sang about—but never grasped. Somehow, we got all tangled up into Judy’s mish-mash of headlines, and then we were rooting for her to get over that rainbow and catch that bluebird of happiness. Judy rated it with us and still does.

A similar type of sad song is silently sung by us, the audience, for Frank Sinatra, the singer. There was that barren stretch of no-song-land for Frankie between the bobbysoxer period and his marriage to Ava Gardner. Then came the sad parting and the down and down climb of Frank. You will notice that I have changed from calling him Frankie—to Frank; it happened the day and night after he and Ava split for good and no good. It was that day and night that Frank Sinatra became a man. It was then, on records or in clubs, that Frank Sinatra began getting under our skin. Frank could become the big shot, a leader of The Clan, a man who knew the President of the United States personally, but this is only surface stuff to us who are hip. We know that in the “Wee Small Hours of the Morning,” he cries his songs to Ava. She is “Little Girl Blue.” She’s the one he’s got under his skin. He likes New York in June, how about you, Ava? She’s the backdrop to every song he sings.

We feel for Frank and we feel every song he sings. We know the hidden meaning of the Iyrics. We’re not so square. And equally, we feel for Ava and love her. Frank is her troubador and her press agent. Yes, Noel Coward never wrote a truer line than that throwaway line in “Design For Living”: How potent cheap music can be!

And now I come to another singer who had a tragic experience which resulted in relating him to the lyrics of the songs he sang. Eddie Fisher was a boy who thought he was Al Jolson, who sang about his Papa and got by on his boyish voice and charm until Elizabeth Taylor made a man out of him by going for the man Burton.

Liz took away his boyish charm and laughter by turning him out in the cold. The songbird ached all over. But when in Rome, do as the Romans do, and Liz did it. Liz, and certainly Eddie, didn’t realize it then, but she turned a boy into a man. I admit it was a hell of a price to pay, his pain for all the world to see.

Eddie didn’t realize it then, maybe didn’t realize it then, maybe didn’t even care—but Liz pushed him out into the cold and into the hot glare of the spotlight that shines on those singers who never achieve greatness until the lyrics of the songs they sing is a souvenir of their lives. Eddie was now in the big league with Sinatra, Garland and company. He was part of the merchandise he was selling.

There was the man Eddie Fisher on the floor of the Cocoanut Grove or on the Ed Sullivan TV Show singing “The Sweetest Song” from Richard Rodgers’ “No Strings”: “The kindest words I’ll ever know are waiting to be said . . . And the dearest love in all the world is waiting somewhere for me . . .”

Who said there was no strings attached? The audience heard between the lines and the notes and the strings were all the way back to Rome and the Cleopatra known as Liz Taylor. Eddie was singing to her—whether he was or not— according to every listener.

Fame and success, if you want it, doesn’t come easy. Ask almost any one of the people who wanted it. Yet ask any of the nobodies at the Schwabadero who are sweating to be somebodies. They’ll tell you strongly and sincerely that it’s worth it at any price. Now they don’t realize and don’t care that a star is denied the privilege of privacy. But, oh, how they fight for this lost right after they have gained almost everything else they sought.

• I met a young lady, Irina Demich (the only young lady in the numerous armies of “The Longest Day”), who is on her way to stardom. Or at least is a former model who is now dedicated to travel the rocky road which sometimes leads to the stars.

This was Irina’s first trip to Hollywood, and she told me she was disappointed because she saw only a few movie stars. I was surprised by her statement because, despite all the Hollywood stars who had worked in “The Longest Day” and the numerous Hollywood runaway stars in Europe, it was an awakening for me that a Hollywood star isn’t a Hollywood star unless he or she is seen in Hollywood.

This certainly speaks wonders of glam- our for Hollywood, despite the empty tales printed in various newspapers and magazines, that Hollywood is a dreary, weary place, no longer the film Capital of the world. In a word of Irina Demich— “Baloney!”

• Which brings my typewriter keys for a paragraph or two to the foolish idea held by most Hollywood producers and Eric Johnston and his office: that the movies must present a perfect image of America to the world. An image of perfection where there are no imperfections, despite I the facts related by the various means of Communications—newspapers, radio, etc. Doesn’t Mr. Johnston and company realize that the lie is more damaging than the unfavorable image? We are trying for perfection and fooling no one but ourselves. We are trying to present a Utopia through our motion pictures when every human being in every country knows there isn’t a Utopia.

Europeans and others know about our Negro problem, to cite one example. Wouldn’t they think better of us if we acknowledge this problem and admit we are trying to correct and erase a deplorable situation? Europeans don’t expect us to solve our problems overnight; but the fact that we have problems, and are trying to do something about them, might set a better example for Hungary, Poland, East Berlin, Cuba and other nations to try and follow.

Get off that stupid kick, Mr. Johnston i and associate producers, that motion pictures must show America in the perfect light of supreme perfection. It’s much better that the movies present us as human beings, because in this manner we stand a much better chance of human beings siding with us—and liking us.