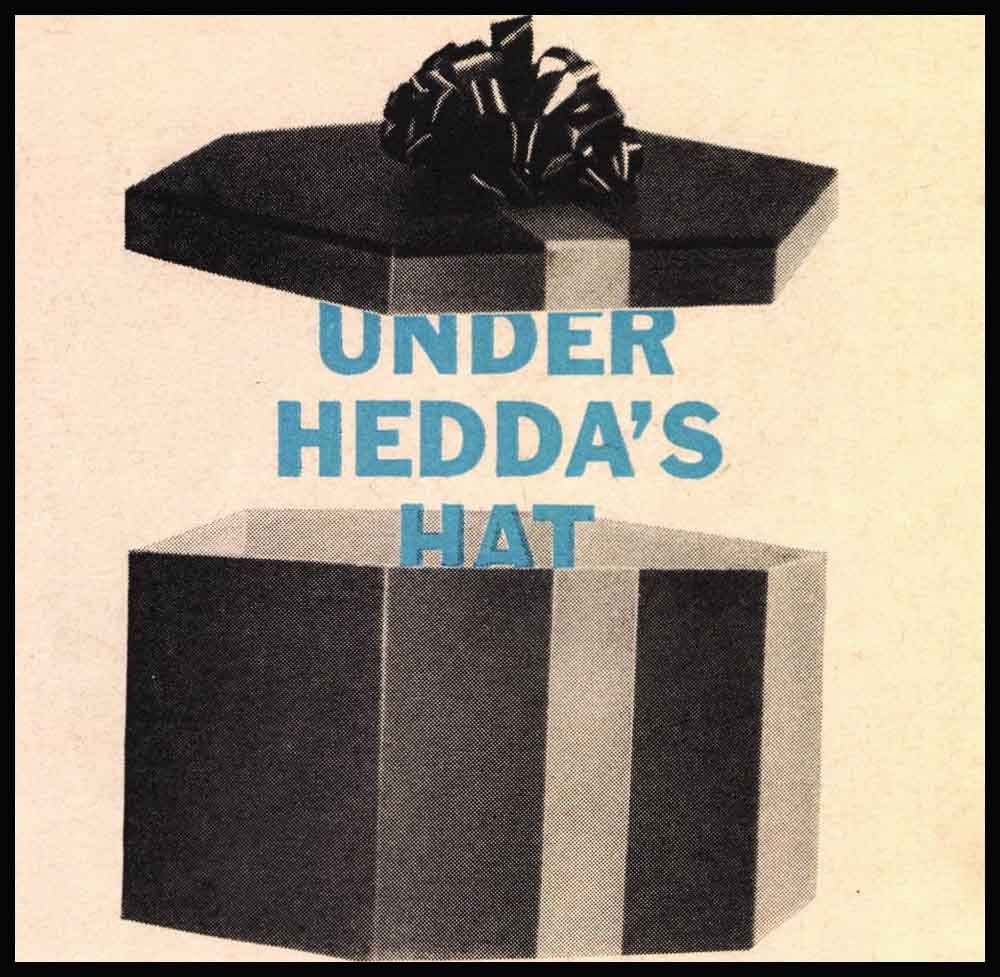 When Montgomery Clift finished his moving seven-and-a-half-minute scene for Judgment At Nuremberg, there wasn’t a dry eye on the sound stage. Old pro Spencer Tracy rushed over, put his arms around him and said, ”That was magnificent!” Monty gets $300,000 a picture, and when producer-director Stanley Kramer told him he couldn’t afford him, Monty said he’d do the role for nothing—and he did. I talked to Kramer about the picture. He said ”It’s the finest script I’ve ever read. I don’t really know if I’m good enough to direct, but I do know actors like Monty, Burt Lancaster, Spencer Tracy, Richard Widmark and Maximilian Schell will make it great.”

By the way, after Frank Sinatra got his Oscar for From Here To Eternity, he told me he couldn’t have done the part without Monty’s help. Said Frankie, ”He really got the Oscar for me.” Clift has never won an Oscar—although he’s been nominated four times. Maybe Judgment At Nuremberg will get him one.

The misunderstanding between Peter Lawford and Frank Sinatra ended quickly. In days gone by, Peter was happy taking orders from Frank. Frank made him a member of the Clan and gave him more publicity than he’d ever had in his life. When Lawford’s brother-in-law be- came President, Peter started to assert himsell. That’s when the misunderstanding started. Let’s face it—everyone knows they need each other and that the feud wouldn’t last.

If at first you don’t succeed try, try again. That’s what Jane Wyman and Freddie Karger did—they remarried after being divorced for seven years. Let’s hope it takes this time.

Laraine Day, former wife of Leo Durocher, is now happy again since her marriage to Michael Grilikhas, a program exec for CBS-TV. They were wed in the beautiful Mormon Temple in West Los Angeles, and postponed the honeymoon until after our Oscar and Emmy shows. It’s her third marriage, and his second.

Bob Hope made appearances at four different universities last month and loved it. When I asked him why, he said, ”I’m in show business, and an actor has to keep acting or he goes stale. College audiences are as responsive as GIs.” A year ago he appeared before 9,000 students at Southern Methodist University at Dallas. ”They gave me such a good time that when I was invited back the next month, I went and told them that one day I was coming back to put on my TV show there.” I made a $5.00 bet with Bob that Alamo would win the Best Picture Award; he picked The Apartment.

Judy Garland’s notices for her Texas visit couldn’t have been more glowing if she’d written them herself. Dallas’ Virgil Miers wrote: ”Miss Garland sweeps you out of your seat when she sings San Francisco. After a 20th bow she was asked to repeat it and did.” Judy took in $40,000 in two nights. It «as a love affair in both Dallas and Houston. When I saw her in Hollywood, she was the same bubbly, bouncing girl I used to see at MGM. Yes, Judy came back with a bang and she’s here to stay.

Sandra Dee wen t to New York with Bobby Darin after she finished U-I’s Tammy, Tell Me True. She sat ringside nightly at the Copa surrounded by his friends, not hers. U-I wanted to set up interviews for her to help sell the film but Bobby said no. Sandra will have to make up her mind whether she wants to be an actress or a full-time wife— or she’ll lose Chalk Garden to Hayley Mills and other good roles U-I has set up for her.

The court denied Dennis Crosby a new court action but did lower his payments from $100 a week to $80 for the child he supposedly fathered out of wedlock.

When Rory Calhoun married Lita Baron his friends said it would last six months. They’re about the happiest couple in town. They were married eight years before they had their first child—now they have three. When they married, Lita gave up her career. She says being a wife is a full-time job. I say she’s as bright as she is pretty.

Peculiar is my word for the situation in the Guy Madison marriage. After three children, Sheila wanted a divorce so she could resume her career. He refuses to give her a divorce. She thinks she has a career ahead of her and managed to persuade 20th to give her a test. I saw it and don’t think she’ll make it. Meantime, Guy is looking after the children. He’s the most tolerant man I know—and Sheila had better think long and hard before she gives him up.

Kathy Crosby campaigned for her father, Delbert Grandstaff, who ran for U.S. Senate in Texas on the Democratic ticket. Bing helped, too—and he’s a Republican. Bing has always donated money to the Republican cause, but I’ve never known him to campaign for any candidate.

Katy Jurado and Ernest Borgnine staged a reconciliation here, then went to Rome and had a knock down, drag ’em out fight. Poor Ernie. He was a beloved actor when he made Marty. The night he got his Oscar he started for the stage, ran back, kissed his wife, then went up to receive his award. That marriage ended when he made a picture with the sexy Mexican wildcat. Ernie divorced his wife, married Katy and they’ve been battling all over the map ever since.

Polly Bergen arrived from New York with husband Freddie Fields, their two children and a French poodle. They’ve rented Tyrone Power’s old home. Polly’s here for Cape Fear with Greg Peck. She hasn’t made a picture in eight years. Polly said she misses her TV show To Tell The Truth because it’s the only time she can truly be herself and say anything that pops into her head.

Vincente Minnelli’s new wife Denise has taken the town by storm. Vincente used to lead the life of a reeluse when directing a picture but now he not only goes to parties but gives ’em once or twice a week. His daughter Liza will spend part of the summer with them either here or in Europe.

Eleanor Powell gave up a weekly salary of 55,000 when she retired from the screen to become Mrs. Glenn Ford. She’s resumed her career now and broke all records at the Sahara Hotel in Las Vegas. She’s been booked into the Huntington Hartford Theater here for a one-woman show. Ross Hunter saw her in Vegas and is looking for a picture in which to star her.

We hear Paul Newman wants the privilege of okaying his co-star in Sweet Bird Of Youth before he accepts the film. He may have outsmarted himself because I hear Elvis Presley is practically signed. Ava Gardner offered to take a salary cut to get the feminine lead. Newman and Geraldine Page did the Broadway play—but Presley and Gardner would be better box office.

There are many beautiful women in this town who are younger than Barbara Stanwyck, but she’s the most envied and most beloved. At any function where she appears she receives the most applause and she deserves it.

I wonder why handsome Gardner McKay takes his big white woolly dog, Pussycat, everywhere he goes. Could it be to protect him from the girls?

Kim Novak and Richard Quine are very cozy again, but it may be just because he’s directing the picture she’s doing.

Tony Curtis and Gina Lollobrigida were put on salary January 5th even though Lady L didn’t start till March 20th. Gina was amazed and said to me: ”These MGM people must be very rich! I have never heard of any company paying money when we do not work to earn it.”

I wonder if you’ll be as surprised as I was to learn that Susan Hayward’s salary is $300,000 per picture plus 7% of profits.

Hope Lange must be playing some kind of game. She and Don Murray haven’t started divorce proceedings, but the house they painted and furnished piece by piece is up for sale. She’s been seen constantly with Glenn Ford, yet the new house Glenn is building has just two bedrooms. Since she has two children and he has one—l don’t think Glenn plans to make Hope Mrs. Ford.

Carol Heiss, who plays Snow White in her first picture, returned from Akron, Ohio, for a kiss, and went home with a black eye. 20th Century decided to reshoot the scene where Prince Charming awakens Snow White with a kiss. In the original take, he kissed her on the cheek and it looked too tame—so Carol came back to Hollywood for a kiss on the lips. On the set she slipped and hit her face against a sharp piece of furniture, getting a eut under her eye.

WHERE ARE THEY NOW? Garbo is still unmarried and lives a lonely life in the same apartment building on New York’s East River that houses Marry Martin. She got an honorary Oscar after she retired from acting.

Francis X. Bushman now hosts a TV show in Hollywood that shows movies of the past.

Charles Farrell sold his famons Racquet Club in Palm Springs but he still works there as host. He and Virginia Valli have been married for thirty years.

Rod LaRocque retired from films many years ago and does well in real estate. His wife Vilma Banky is a golf Champion.

Clara Bow lives in seclusion in Santa Monica with a nurse. She paints when she feels like it. Her husband Rex Bell and their two sons live in Las Vegas.

Lillian Gish is on Broadway in All The Way Home.

Buster Keaton is always in demand on TV and is always good. Recently he toured with the musical Once Upon A Mattress.

Janet Gaynor does a TV series. Her son Robin Adrian will marry this summer.

Colleen Moore is now Mrs. Homer Hargrave, a civic leader of Chicago and member of the firm of Merrill Lynch, Pierce, Fenner and Smith. Her husband has a seat on the stock exchange.

Norma Shearer is divinely happy as Mrs. Martin Arrouge. She’s 56 but doesn’t look it. Her daughter was married and divorced. Her son’s stayed married.

Don Ameche, the father of six, starred on Broadway recently in 13 Daughters.

Jean Arthur has retired from the screen and lives the life of a recluse in Carmel, California.

Gene Autry’s switched from horses to baseball. He formed a new major league ball team, The Angels. We’re all rooting like mad for them. P.S.—They didn’t ask Los Angeles taxpayers to buy them a ball park.

Bette Davis divorced Gary Merrill, her fourth husband, and is coming back to Hollywood for Pocketful Of Miracles with Glenn Ford.

Constance Bennett was the first film player to earn $30.000 a week 25 years ago. She recently played Auntie Mame on stage. In private life, she’s happily married to Col. John Coulter.

James Cagney has been married to the same wife for 40 years, and has two children. He owns a huge ranch in San Francisco and a paving farm in upper New York State.

Dana Andrews has made a killing in real estate by buying low and selling high. He has four children and the same wife he had when he made it big in films.

That’s all the news for now. See you next month.

It is a quote. MOTION PICTURE MAGAZINE JUNE 1961