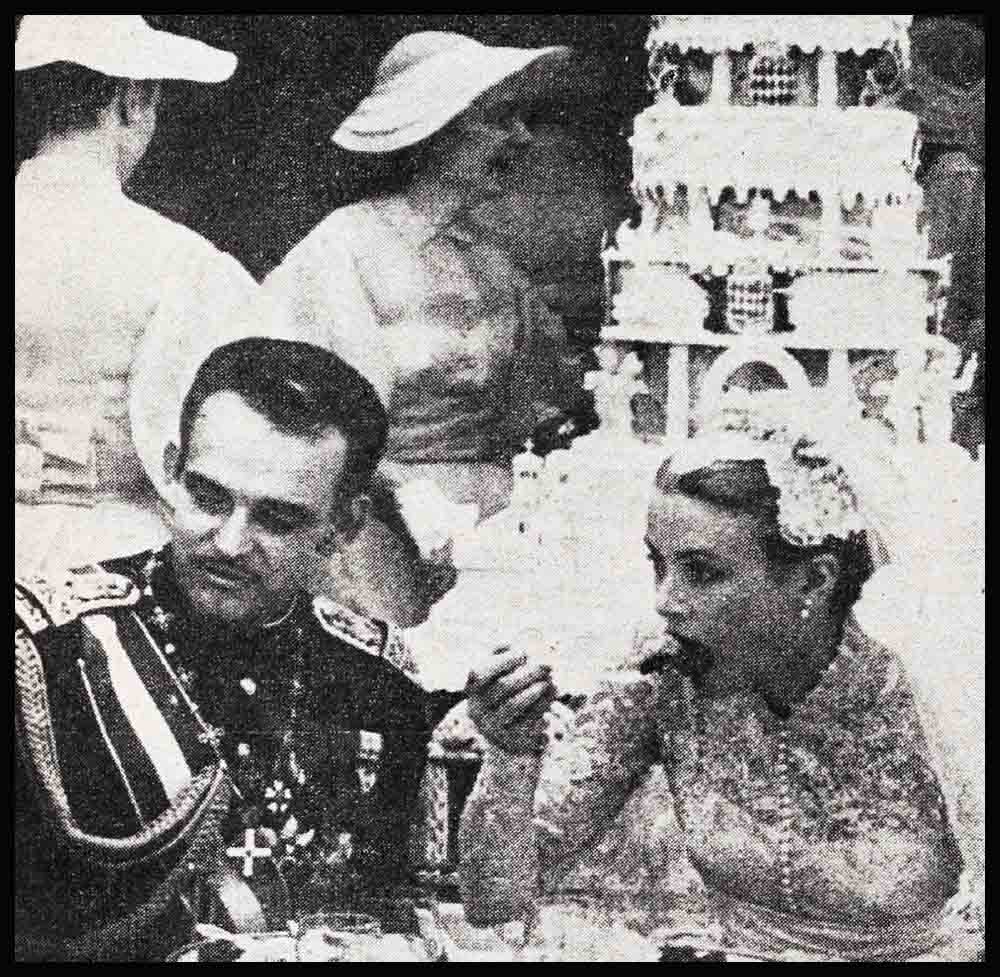 The Story Of Grace Kelly’s Wedding

Two people in love plan to marry. They want their wedding to be sacred and beautiful. This is neither unusual nor unrealistic; it happens every day, everywhere, and it always will. But recently, when the two people in love happened to be Grace Kelly, the movie queen of America, and Rainier Grimaldi, the reigning Prince of Monaco, their marriage became one of the most extraordinary, explosive events of our time—from the astounding fact that an American actress was marrying a foreign ruler, to the fantastic, world-wide news coverage and the frantic attempts to maintain order in the midst of international confusion.

At precisely 10:11 a.m. in Monaco, on Thursday, April 19, Grace Kelly entered the sun-drenched Cathedral of St. Nicholas, situated high above the Mediterranean Sea. In her flowing white and ivory gown of taffeta and lace, and her 125-year-old rose-point lace veil, she was a picture of flawless loveliness as she floated slowly down the aisle on the arm of her father, John B. Kelly, and took her place beside Prince Rainier.

Watching this solemn ceremony in awed silence were some 600 guests of the Kelly and Grimaldi families, the official representatives of 25 nations, plus 100 representatives of the press—reporters, television and newsreel cameramen. Throughout Europe, millions of people were watching via television.

When the ceremony ended, Princess Gracia Patricia gave a little sigh of joy. Then she and the Prince, both unsmiling, walked down the aisle and out of the cathedral, while trumpets blared, drums rolled, cannons boomed and jet planes roared overhead. Outside, thousands upon thousands of well-wishers lined the narrow, winding streets of Monaco and wildly cheered the couple as they drove by. Shouts of “Vive le Prince!” “Vive la Princesse!” thundered across the tiny principality.

Then the grand procession advanced to the palace for a gala reception for the 500 official guests. Delicacies of all kinds were graciously served and consumed, including thousands of bottles of champagne, bushels of caviar, and a gigantic seven-tiered wedding cake.

In contrast to the utter lavishness and grandeur of the wedding and reception. the bride and groom spent the afternoon at a soccer match. Then. shortly after 5 P.M., they boarded their honeymoon yacht, Deo Juvante II, and disappeared into the sunset.

After it was all over, it still seemed hard to believe that Grace Kelly was now Princess Grace of Monaco, wife of the absolute ruler of the smallest State in the world. And, looking back over the events of the preceding weeks, it truly seemed like a fantastic dream.

From the moment Grace disembarked in Monaco. on April 12, the excitement and festivities continued without pause. Without a doubt. the major reverberations were evoked by the press—some 1500 of them—who clawed and clamored with the greatest of uneasiness as they tried to record every motion, every utterance of the celebrated couple.

While editorial tempers rose, and a few over-eager members of the press were forced to cool their heels in the Monaco jail. thousands of other visitors and guests managed to enjoy the round of celebrations, as did the couple—to a certain extent. At all times. Grace remained outwardly calm and unruffled, a stunning picture of regal poise and dignity—and truly a woman in love. As one close observer remarked: “Her eyes follow the Prince at all times. She gives out an aura of love that almost bends to him physically. And when she speaks to him. there is a breathless quality in her voice, a kind of vibration.”

The Prince, however, showed signs of strain, partially because he was kept so busy, running everything from the guest lists at all affairs to the censoring of photographs.

They did manage to have a few moments of peace and privacy. The night after Grace’s arrival in Monaco, she and the Prince dined alone at the I palace. The following night, at a champagne dinner given by Grace’s I father at the Monte Carlo Casino, they enjoyed dancing cheek-to-cheek. That afternoon, along with Grace’s parents, they had driven to the Prince’s villa in near-by Cap Ferrat where, after lunch, they took a stroll in the garden and were seen embracing and kissing. like any devoted sweethearts.

For days, the wedding gifts had been streaming in, faster than they could be opened and registered. Even before the wedding days, the value of gifts received had topped $1.000.000. To add to the significance of it all. M-G-M was filming all the proceedings, while a friend of Grace’s, producer Gant Gaither, had been assigned to document the occasion in book form. And throughout the little land, there was dancing in the streets, champagne parties, fireworks, ballets by Paris and London troupes. Indeed, it was extra, extra extraordinary.

And then it was all over. “The Greatest Wedding Ever” was a thing of the past, and the Prince and Princess. aboard their yacht on the Mediterranean, shared their love in welcome solitude.

What will life be like for Grace, now that she is a reigning sovereign? And what are the true facts behind their meeting and falling in love? Is the Prince still in love with the French actress, Giselle Pascall, as rumored?

The best way to discover the real truth was by talking to Reverend Francis Tucker, the Prince’s chaplain, who brought the two together.

When asked why they married. Father Tucker smiled and said, “They married because they were in love. Although they only had met once, before they saw each other again in the States, they had what I like to call a mental telepathy for each other. They weren’t exchanging letters or anything like that, but they were thinking of each other. All the Prince could talk about from the time they met was Grace.

“I did not know the Kellys,” Father Tucker continued, “but I made some inquiries. The more we learned of Grace, the more the Prince was convinced she was the right girl. As for her, I think she hoped—but, of course, never dared to expect—that the Prince would fall in love with her. She was very much in love with him from the very beginning.”

What about Giselle Pascall? The newspapers had reported that Reverend Tucker had preached a shocking sermon in Monaco the Sunday before the wedding. He was supposed to have said that the Prince had denied his true love for the sake of his people.

“I was misquoted,” said Father Tucker, without rancor. “I had heard a lot of gloomy forecasts about this marriage. There was a general feeling that it wouldn’t last. My sermon was that. instead of gossiping about this royal marriage, the people of Monaco should look into their own hearts and their own marriages. I reminded them that the Prince had given up a young man’s love when he gave up Giselle. He gave her up three years ago.

“I was wrongly credited with breaking them up. This was not so. Once I even asked the Prince, ‘Why don’t you marry the woman you love?’ But he knew he could not because his advisers, as well as the people of Monaco, were against her. Not because she is an actress—for Grace Kelly was an actress—but because her background was too well-known here. The rumor was that she could not have children. Today people are saying Giselle married a few months ago and is now going to have a child. She married, but it is not true that she is going to have a child.

“I don’t think he cast her aside or she gave him up,” said Father Tucker. “I think they just drifted apart.”

How about the rumor that the Prince came to America for a rich wife, and of Grace’s two-million dollar dowry?

“The first thing John Kelly told me said Father Tucker, “was no dowry! But, of course, it was wise for the Prince to marry an American. It will bring new blood to the royal line. I think, too, that the principality will benefit from the attention that has been focused on Monaco.”

It was no secret that the press had felt it had been treated unfairly and had considered the edicts from the palace harsh, to the point of being ridiculous. The Prince had been branded spoiled, pampered.

“None of the bad press was the fault of the Prince,” Father Tucker explained. “He was badly advised, for he is much too shy and gentle a person to give out arbitrary edicts. You see, the trouble is that people don’t get to the Prince, himself. When I first came here as the Prince’s personal chaplain, I wanted to handle a certain matter a certain way. I was told, ‘The Palace doesn’t approve,’ and, of course, by the Palace they meant the Prince. But, one day, I happened to mention this matter to the Prince. ‘Why don’t I you handle it your way?’ he suggested.

“I was startled. ‘Because I was told Your Highness didn’t approve.’ He was furious. You see, he knew nothing of the intrigue around him. He changed the order immediately, and I proceeded with my plans.”

When asked if he thought the engagement of the Prince and Grace happened all too suddenly, Father Tucker replied, “In all, the Prince and Grace had a three-month courtship. I’m an American, you know, but I don’t believe in couples going together for three or four years. This was love at first sight. You have only to see them together to know this. Of course, the Prince must always maintain royal dignity in public.

“He’s a nice boy. Even John Kelly said, ‘You know, he grows on you.’ Mr. and Mrs. Kelly said goodbye to Grace in the castle before the Prince and Grace left on their honeymoon. They trust the Prince and know he will make Grace happy because he loves her.

Father Tucker contemplated a minute. “I won’t be in Monaco any longer,” he said. “I have been recalled to Rome. But I’ll always be the Prince’s chaplain. This is something that is conferred on you and which does not change. I will always be here when they need me.”

Then, this was fact as compared to rumor. It mas a storybook romance, after all. They have truly made a love match.

But there is more to this marriage than that. Now the possessor of some 138 royal titles—such as Duchess of Balentinois, Countess of Carlades, Baroness of Buis—Grace will have to live up to every one of them. Some of her official duties will include running the palace, planning state functions and private parties, entertaining foreign emissaries. Then, of course, there is the all-important matter of her giving the Prince the heir that will keep Monaco tax-free, fancy-free and independent.

And what of her movie career? Will she be able to turn her back forever on the profession that did so much for her, and has meant so much to her?

Will she also be able to adjust to the European, royal way of life? Will she yearn to return to “my beloved country?”

Will she continue to see Rainier as a debonair, romantic Prince Charming? Or will their temperamental and sociological differences dim their love?

Those who are closest to the Prince have said of Grace, “She’s the best thing that ever happened to him.” And what of Grace? Will this be true for her?

Eventually, the answers to all these questions will be known. Meanwhile, the world will be eagerly waiting, watching and wishing Prince Rainier and Princess Grace well, on their regal journey to Paradise.