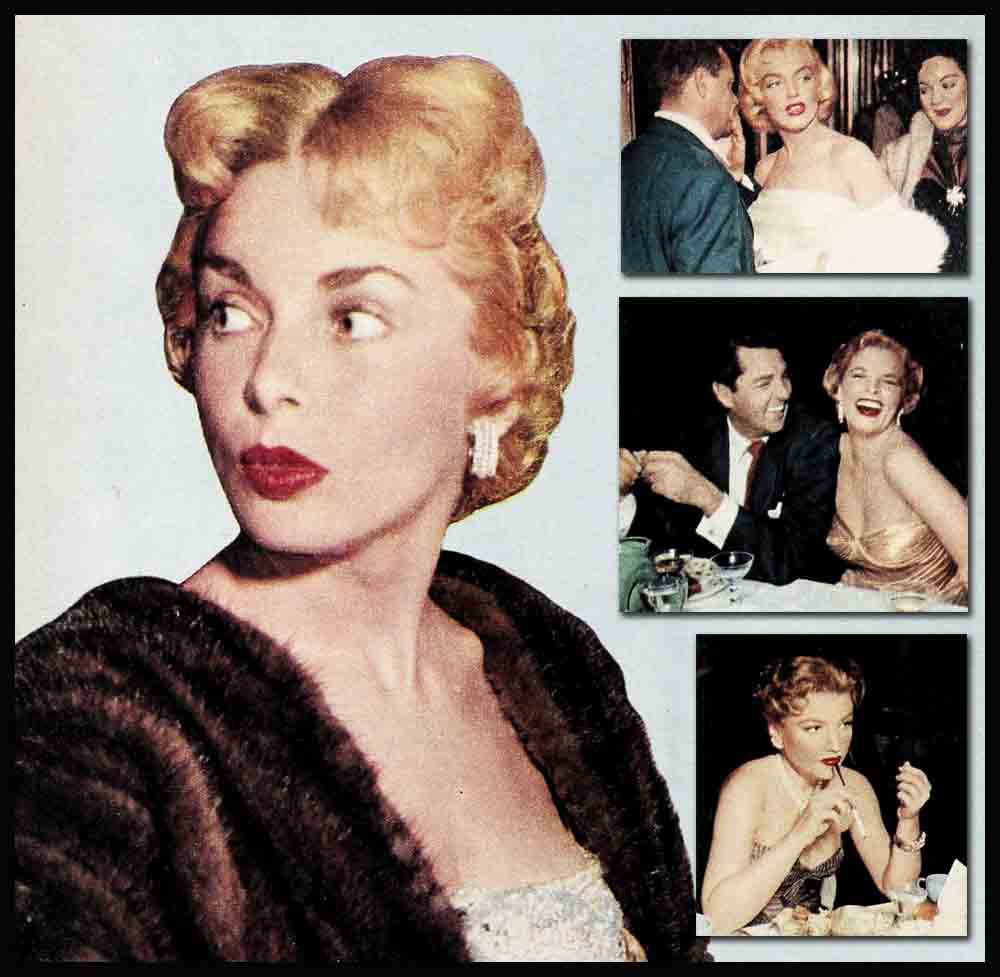 Chuckle of the Month: When Mickey Rooney’s telephone rang recently and he answered it, Bob Hope was on the other end. Cracked the comedian, “Is this the Irish Toulouse-Lautrec?” . . . His long legs encased in green silk tights, Howard Keel, testing for “Kiss Me Kate,” turned to Kathryn Grayson and quietly said, “Now I know how Marilyn Monroe would feel if she had to wear——steel armor!” . . . According to Victor Mature who plays Demetrius in “The Robe”: “This is the fifth role for which my hair has to be curly. I’m beginning to look like a tall Shirley Temple!

War Bride: The warm and tender heart of Leslie Carol was doubly saddened when her Geordie Hormelas activated into the Coast Guard Reserve. He’ll see active duty for the next two years—so a columnist chose this time to announce the little French girl was contemplating divorce: She would get it, the story went, when her husband returned. The truth is, Leslie moved out of their apartment, and, along with her pets, moved in with the senior Hormels to wait for the man she loves.

Hasta la Vista: Before they left on a tour of South American theatres, Debbie Reynolds, Carleton Carpenter and Pier Angeli took daily Spanish lessons from Ricardo Montalban . . . Rock Hudson finally got that badly-needed, three-month vacation, his first in five years. “At last,” he quipped, “I’ll get to finish ‘Gone With the Wind’ ” . . . Doris Day and Marty Melcher celebrated their second wedding anniversary on the train that took them to New York and all the new shows. Then they headed for Massachusetts, where, for the first time, an excited Doris met equally excited in-laws.

Switcheroos: Everyone expected Marilyn Monroe and Betty Grable to get along like a pair of panthers when they worked together. So—they became so friendly; Marilyn bought presents for Betty to take home to the kiddies . . . For seven long weary weeks, Jane Wyman played nineteen-year-old Richard Beymer’s care-worn mother in “So Big.” The day the picture finished, Janie threw a party and won a jitterbug contest dancing with her “son” . . . It used to be Terry Moore and Nicky Hilton. Now it’s Terry and Bob Wagner; Nicky Hilton and Nora Haymes.

Thoughts in Passing: History has a way of repeating itself in filmtown. Twenty-six years ago an unknown, Lucille Le Sueur, walked through the M-G-M studio gates for the first time. This month, as Joan Crawford, she returns to the same studio, scene of her first triumphs, to star in “Torch Song” The perplexing behavior of Gloria Grahame who evidently has been hurt by life and can’t quite overcome her defensive attitude. Since winning an Academy Award, however, she does deserve an E for effort in trying to be cooperative . . . The aura of loneliness surrounding Anne Baxter since parting from John Hodiak. Anne left Hollywood to spend some months in Europe, where she will star in “Carnival.” Her co-star will be lonely Steve Cochran.

Family Style: While Jimmy Stewart devotes every spare second to boosting the cancer drive fund, his Gloria teaches a Beverly Hills Sunday school class . . . Esther Williams and Ben Gage hope their third baby will be a girl, because, they kiddingly crack, “We could use another waitress in our Trails Restaurant!” . . . John Derek and his Pati expect their second child this fall . . . And Virginia Mayo and Mike O’Shea are starry-eyed over the impending arrival of their first . . . Good friends, the Ray Millands and the Randy Scotts, never go near night clubs. They prefer to invest a set sum each month in United States Savings Bonds for their children . . . The William Holdens opened the summer season with a general invitation to the neighborhood kiddies to use their swimming pool. They made only one stipulation: the mothers must take turns at—pool sitting!

Literary Lights: Hollywood has been bit- ten by the writing bug with some of its products already on the national bestseller lists. Dale Evans Rogers’ book about hers and Roy’s daughter, “Angel Unaware,” is the poignant story of their love for a daughter doomed to die. Alyce Canfield, and Mervyn LeRoy one of our town’s best directors, teamed up to write an aptly titled top seller, “It Takes More Than Talent.” Lionel Barrymore is on the bookstalls with a novel, “Mr. Cantonwine: A Moral Tale,” and sister Ethel is finishing her memoirs for publication.

Short Change: Since she became engaged to Dr. James McNulty, Ann Blyth is a new woman. Too serious and sometimes too humorless, she now laughs, talks and even jokes at parties . . . Once upon a time Van Johnson didn’t want his wife to work. When Ann Sothern needed Evie for a role in her television series, not only did Van give his consent, he went one better and bribed a bunch of kids to wait outside the studio and ask Mrs. J for her autograph! . . . Joan Evans looks so natural these days, some people don’t recognize her. For the first time since she was fourteen and starting in pictures, her hair is back to beautiful black again.

Ooops: Cal caught up with lovely Anne Francis recently and congratulated her on her first wedding anniversary. We took to talking about winning awards. Had Annie ever come close to winning one? “Very close,” she laughed. “At the PHOTOPLAY Gold Medal Award dinner, I stood in back of Joan Crawford. Just as I stooped to pick up my glove, Miss Crawford swung around with her framed certificate and let me have it.That’s how close came!” . . Joan Rice, who is Burt Lancaster’s leading lady in “His Majesty O’Keefe,” lost her vaccination certificate. To enter the U. S. from their Fiji Islands location, she had to show immigration officials her vaccination scar—on her hip!

Famous First Words: Apropos of the time Zsa Zsa Gabor refused to broadcast with George Sanders and kid their marriage, she says: “I wasn’t an actress then, so I didn’t understand what was expected of me!” . . . Says June Allyson who practically patrolled the aisles the night Hollywood saw “Split Second” at the Academy Award Theatre: “Dick (Powell) still wasn’t well enough to attend the preview. It’s his first directorial job, he was anxious, I substituted for him. Now I know how he felt waiting for me outside the delivery room in the hospital!”

Predictions: That Bette Davis and Gary Merrill will become the most successful husband and wife team in pictures, when they find that “right” script they want to produce together . . . That John Forsythe will zoom to stardom. M-G-M and U-I now share this stage actor’s contract, and Darryl Zanuck tried twice to borrow him . That the tremendous trouping of Alexis Smith in “Split Second” (it’s the talk of Hollywood) will at long last give her the recognition that’s been due her . . . That Gene Autry, despite those reports, will not forsake movies. He’ll be around in a 3-D picture in the near future . . . That no matter what the gossips try to cook up, Janet Leigh and Tony Curtis will hold on to their marriage. Their trip East with the Jerry Lewises is one more proof—for those who need proof handed to them.