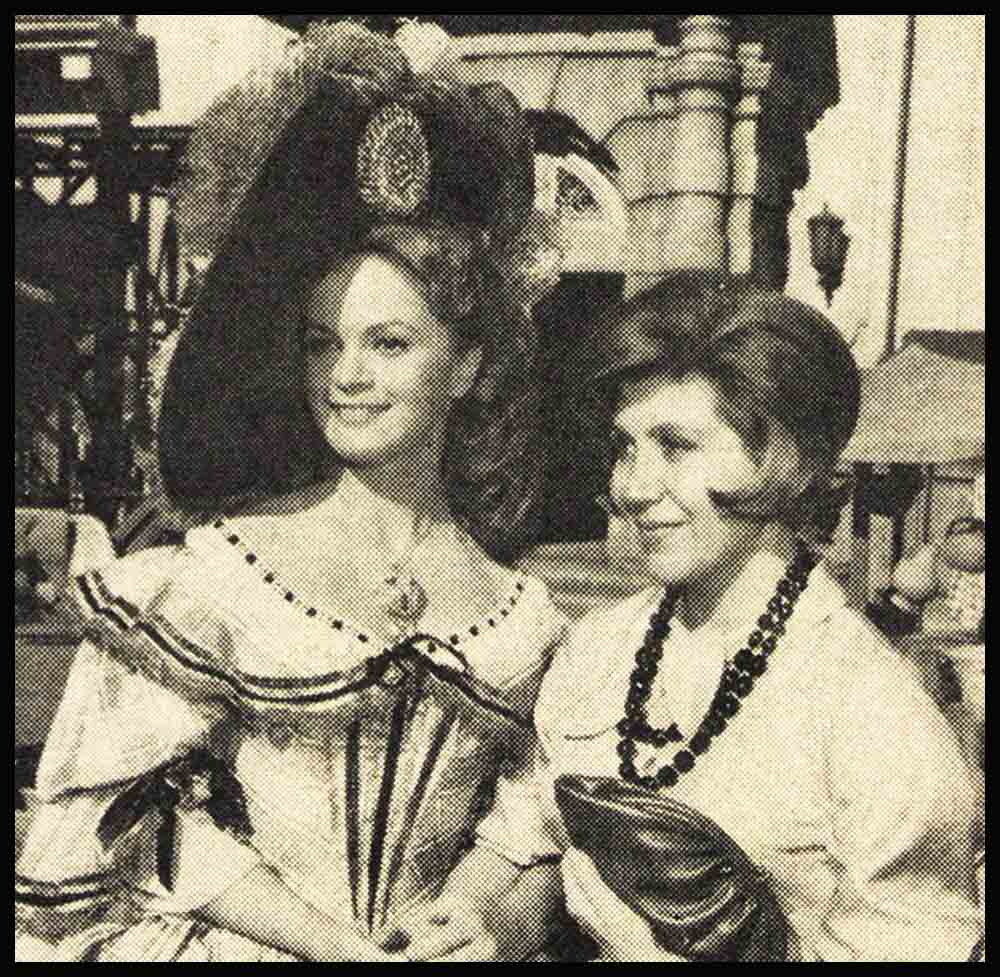 YOUNG HOLLYWOOD, USA . . . The only place in America where the explosion of verbiage is far greater than those nuclear tests made out in the desert or at Cape Canaveral!

A STORYTALE . . . Once upon a time there tvas a boy with curly blond hair, a big smile and huge muscles who looked just like Terry of Terry And The Pirates—only his name was DOUG McCLURE. When Doug became a big boy he decided to become an actor. He also thought it would be nice to have a wife and maybe a baby. So, he got married to a girl from Hawaii named Fay and had a little girl named Tane. He got even luckier when NBC-TV signed him for their series, Overland Trail. But suddenly, London Bridge came falling down—and away went Fay, Tane and Overland Trail. Doug was lost, alone and broke. When it looked as if there were no hope in sight, from out of nowhere a vision appeared. She was a half-Philippino, half-Hungarian girl who called herself BARBARA LUNA. The days became rosier and suddenly Doug was in love again and suddenly there was a show called Checkmate. On the show he had a co-star, TONY GEORGE, a ”helluva fella,” who struggled many years before he became successful. A mutual admiration society was formed; everyone loved everyone. But, alas, the sun went behind a cloud, and rumors started that all was not well between Doug and Tony. So, Fairy Godmother waved her magic wand and went to Revue Studios. Was it true that Doug had told friends, ”If you invite me to a party, make sure you don’t invite Tony”? . . . And was it true that Tony had told his friends, ”This kid’s too good looking. I’ve got to find a way to keep his part small”?

”Isn’t true,” cried Tony. ”Who could have said such a thing? I love Doug like a brother. I’d do anything for him. It was Barbara I didn’t like. In the beginning, I thought she was too hip for Doug. but she’s calmed down now and I like her a lot!”

Then Doug chimed in, “Tony is like an older brother. I’d do anything for him!”

So the Fairy Godmother left. On the way home a little birdie whispered, ”There’s a troublemaker in the house and methinks it’s Barbara! You see, it doesn’t look as if Barb will marry Doug because all of a sudden he feels he doesn’t want to be tied down. Why don’t you look into the NANCY KWAN situation—she may be one of the real reasons Doug doesn’t want to settle down with Barbara. And those rumors about Tony and Doug? Could Barbara have started them? She never liked Tony, and when a girl is out to snag a guy—if she’s hip—she makes sure her field is clear of influential people.”

Flabbergasted by what the little birdie said, the Fairy Godmother went home to ponder this state of affairs and came to the conclusion: “If a girl could only love a guy without trying to run his life, too, how much happier both she and he would be!”—The End.

When YOUNG HOLLYWOOD decides it’s time for a feud—look out! DICK BEYMER is on the warpath. He flares up at the mere mention of FABIAN. And I’m beginning not to blame him—or Fabe! It’s just circumstance—or is it? They both played in High Time—but Fabe had a better role. That situation was aggravated when TUESDAY WELD found Fabian more fascinating than ”Beymy.” So, Dick found KATIE KELLY, who was working as an extra on the set. Needless to say, yon know what happened there. . . . Swapsville! Finally, all was copasetic. Then came word that Dick was practically set for Go Nortlı To Alaska— but Fabe snagged the role. Now we hear 20th is prepping two flicks, Bachelor Flat and Celebration—and guess who’s practically set for both roles? And I’ll give you one more guess what’ll happen if Fabian finally snags the deal!

If you had heard the noises coming from TUESDAY WELD’s house in the hills the other night, you would have thought the roof had fallen. Mama and Too-Too were at it again and not even the ”barefoot contessa’s” new guardian, BLANCHE DAVIS, could do anything about it! ’Twas the same old story: Tuesday wants privacy; Mrs. Weld wants to be part of the private world. I wonder if Tuesday will win when she turns 18 in August, or if she’ll pull a SANDRA DEE and get married. She’s strong these nights on GARY LOCKWOOD and SKIP WARD!

OFF AND RUNNING . . . And MR. DARIN is blowing up more steam than the Fulton Steamer. Bobby couldn’t care less, so he claims, what you say about him as a person, but when you start knocking his talent, that’s more than he can take—especially when the critics give him just two more months in the business. Most likely, these staid critics have never watched Bobby work. If they had, they wouldn’t dare knock him. After all, not every performer in the business can play to SRO crowds and have the people lining up around the Copa.

SHE’D BETTER NOT SHOUT-SHE’D BETTER NOTCRY . .. ’cause if tiny DAWN RACHAEL CALLAN does, you can be sure Poppa MICKEY may be moving out of his home—temporarily, that is, until The Tiger Among Us is finished. It’s one of the acting plums of the season and thanks to Pepe, Mick will get a chance to play opposite ROD STEIGER and ALAN LADD. It’s been two years since Mickey appeared in a dramatic film of this caliber (the last was They Came To Cordura), and he doesn’t want anything to go wrong! After all, there’s his pretty wife Carlyn and baby Dawn to support now and good work in good films like this one can determine their future!

IS IT TRUE . . . that JIM HUTTON. whom we loved in Where The Boys Are, is trying to work out the difficulties of his two-year marriage for the sake of his kids, 17- montlh-old HEIDI TARQUIN, and baby TIMMY, 6 months old? . . . That ABC- Paramount doesn’t know PAUL ANKA is contemplating a switch to RCA Victor? . . . That all is not well on the Babes In Tayland set for ANNETTE FUNICELLO and TOMMY SANDS because director JACK DONAHUE had wanted SHIRLEY JONES and JACK CASSIDY—a combo with operatic tones—for the leads? . . . That the reason Surfside Six’s LEE PATTERSON is always in a depressed and melancholic mood is ’cause he can’t forget the war-time tragedy that took the lives of his wife and two kids? . . . That the real reason FRANKIE AVALON wants his road manager, TONY DESANTIS. around with him all the time is because Tony’s a good looker who helps attract plenty of pretty femmes? . . . And is it also true that 20th execs are so pleased with Frankie’s work in Voyage To The Bottom Of The Sea, that they’re considering him to play opposite TUESDAY WELD in High Heels? Just Askin’?

SURFING ALONG SUNSET . . . Attended MIKE and DODIE LANDON’s fifth anniversary shindig, which turned into a slight tragedy when their business manager told them they couldn’t afford to lay out $3,000 to adopt a pair of baby girl twins. The Landons hope to adopt at least three more kids since they’re so pleased with one-year-old baby JOSH. Also celebrating a Happy, Happy was ALLYSON ADAMS, NICK and CAROL’s dotter—and she is a doll! Visited the Adams’ new abode and met 18-year-old JACK CHAPLAIN, whom Nick signed to a 50-50 contract. Jack, an Illinois lad, who was the black sheep of his family, amazed me with his talent when he did a five-minute scene from Death Of A Salesman . . . PAMELA GARNER, JIMMY’s offspring, died a million deaths when watching her pa sing on the DINAH SHORE Show . . . Tragedy almost struck BOB and MAGGIE DENVER’s house. The horrible wind storms that have plagued Hollywood, knocked a tree onto their house crushing the roof where their two little kids slept . . . DWAYNE HICKMAN has his new dream girl and she’s not an actress but a school marm. What’s more, he’s known her for years! Her name’s LINDA HOPE.

DID YOU KNOW . . . that FABİAN registered for the draft now that he’s 18 and that he bought himself a 31/2-acre farm in Berlin, New Jersey, with apple orchards and all the works? . . . That GEORGE HAMILTON asked his ma, who hasn’t wanted Georgie to get married, if she’d like SUSIE KOHNER for a daughter-in-law and she said, ”Yes”? . . . That come BOB CONRAD’s wife JOAN’s 30th birthday, she’ll inherit 200,000 greenbacks? . . . That ROGER SMITH and his VIKI may refuse all invites to parties ’cause they’re afraid of incompetent baby sitters who forget to close back doors allowing their little dotter’s pussy cat to get run over by a car? . . . That VAN YVILLIAMS’ energetic wife. VICKI, is expecting again? She lost her last baby. . . . That BRENDA LEE came to town for 20th’s The Two Little Bears and is being guarded closely by LAMAR FIKE, ELVIS PRESLEY’s ol’ buddy? . . . That CLU GULAGHER bought a motorcycle and 30 minutes after riding it was on crutches with a broken ankle?

BEHOLD! A FACE TO BE REMEM- BERED! … İf I look at Route 66 one more time and don’t tell you about GEORGE MAHARIS, I’ll bust! If ever an oddball passed in front of a camera lens, George is it! He never wears an overcoat—not even when it’s 10 degrees in his native New York City. And when he has extra money bulging out of his pockets, he gives it away. When George was studying at the Neighborhood Playhouse in New York City with Sandy Meisner, he took on all sorts of odd jobs at night— singing with a group called The Singing Mariners (no, not The Mariners of ARTHUR GODFREY fame!), waiting tables and running an elevator in Radio City Music Hall. It took him quite a few years, but he managed to save up $3,000. Rather than spend it on himself, Maharis, The Greek (as he likes to call himself) gave the money to a girl who lived down the block from his family in Flushing, N. Y., ’cause she was mixed up and needed psychiatric help. Several months later, when George’s tonsils ruptured, he didn’t have any money to go to a doctor. He almost bled to death before he ended up at a clinic where, as George tells it, ”an intern sat me on a chair and without anesthesia, yanked out the damn tonsils and sent me home to my bleak, telephone booth-sized pad.” George also says that he was constantly aggravating his folks—and you can believe him. My only regret about this wonderful newcomer is that his gypsy soul and his Route 66 schedule prevent him from wandering to Hollywood too often. We sure could stand having someone like him around—all the time.

ODDS ’N’ ENDS . . . If you’re thinking of getting into show biz do like TUCKER SMITH, who plays ”Ice” in West Side Story, did. He sang Goodbye Momma, l’m Off To Yokahama For My Country, My Flag And You! on The Children’s Hour . . . BOBBY RYDELL had a ball touring all the major capitols of the continent: Paris, Madrid, London, Copenhagen and Stockholm. That’s what I call living it grand at 17!

NOGGA NOODLING . . . What handsome young actor, about to be divorced from his wife, won’t fight for the custody of his child because when he tried to do so several months back, his wife drank herself under the table and got into an auto accident because she hated the thought of losing her hubby and her baby?

And that’s my YOUNG HOLLYWOOD for now! See ya next month.

It is a quote. MOTION PICTURE MAGAZINE JUNE 1961