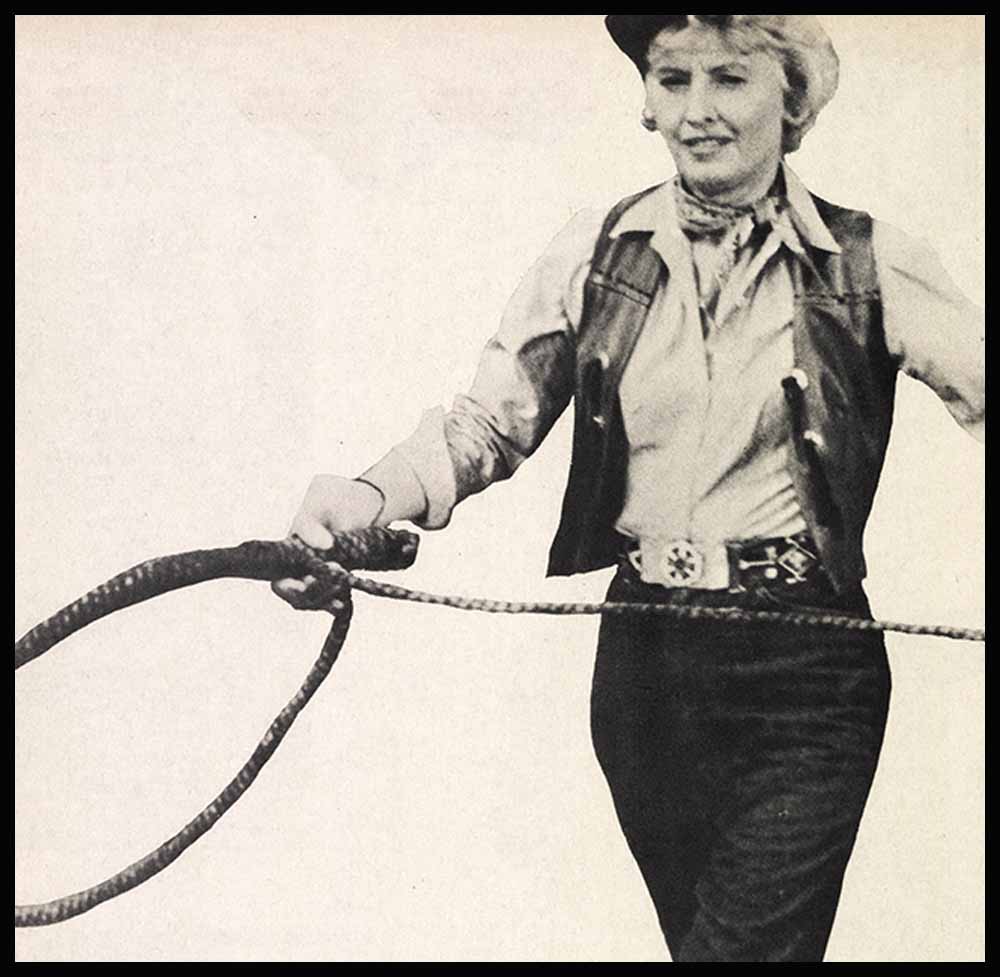 The Bitter Life Of Barbara Stanwyck

Barbara Stanwyck is now 58 and doesn’t hide it; she’s a woman who has covered plenty of mileage but doesn’t show it, who has had some rough breaks but no longer frets about it, and who knows the score and doesn’t forget it. As decisive and determined as ever, outspoken Miss Stanwyck knows what’s best for her, but it took Hollywood seven years to agree with her. Since 1957 she’s wanted to do a western series on TV, but she was told, “Westerns are on the way out.” Now, Barbara’s big dream has come true via ABC’s The Big Valley. As the widowed Victoria Barkley, she rules the family of three sons. Naturally, she’s been compared to a female Lome Greene, who heads the Cartwright elan on NBC’s Bonanza. But the star doesn’t agree. “Our TV family, the Barkleys, is much tougher than the Cartwrights. . . . My sons are men. We behave like any normal family—we fight, argue, discuss things. We’re not at all like any of the families on TV today. I don’t know where the hell these people are. I never see anybody like them in real life.” To Barbara, realism is the key to success. “Realism, being your- self—these are the things stars were made of in the early days of Hollywood.”

In those “early days,” there were few stars bigger than Barbara Stanwyck. Her famous panther walk and figure— 5’4″, 110 lbs.— haven’t changed a bit since she strode across the screen in 1931, but Barbara Stanwyck, the woman, has changed considerably. In her youth she was bitter about the loss of her parents: later she was bitter over the loss of her two husbands. It took years for the dam inside her to break. If it weren’t for her close friends, Nancy Sinatra, Sr., and her press agent, Helen Ferguson, Barbara’s freedom from despair wouldn’t have come so soon. “I figured life is for living and let’s get on with it,” recalls Barbara. The great star is happiest when she’s working—especially doing this new series.

“The chip on my shoulders held my shoulders straight . . . and my eyes were curtained so that no one would know I didn’t believe in anything in the world.”

1- Barbara fell in love with actor Frank Fay in New York; they married in 1928 and she followed him to H’wood. Lonely during the hours Frank was away, she decided to keep busy doing films; in 1933 they adopted a 4-month-old boy she named Dion.

2- “Just as my marriage to Frank Fay was inevitable, so, I guess,was our parting. We divorced in 1936. Once again I knew the world was alien and unfriendly.” But frequent date Gary Cooper helped cheer her.

3- Marian and Zeppo Marx knew Barbara would like Robert Taylor and finally got her to OK a dinner date. Three years later (May 14, 1939) they married; here they return from honeymoon.

4- Love and the Taylors’ 35-acre ranch agreed with them. They took a very active part in the ranch, which had horses, 1100 citrus trees.

5- Besides being ranch buffs, Babs, Bob loved to play tennis, golf. Here the Taylors relaxed after a golf game with Clark Gable. Carole Lombard, then Mrs. Gable, took this picture.

6- Babs and adopted son Anthony Dion Fay, 15 here, were devoted then, but Dion said in ’60, when arrested on a morals charge, that he hadn’t seen Barbara since he joined the Army in ’51.

7- After Bob’s return he got a plane and began taking long trips; eventually Babs became aware she was “losing” her husband. Pic with the Van Johnsons was taken in-’50, yr. she filed for divorce.

8- For years after her divorce was final (’51) Barbara kept a shell around her, but Nancy Sinatra (here w. Geo. Jessel) broke thru barrier.

9- Babs went out, seemed chipper, but it was all a front. Unescorted at ’51 bash, she danced with a recently divorced Dan Dailey.

10- Friend Joan Crawford says “Chin up, Missy.” Babs had sold home, put personal things up for auction, which turned into curiosity spectacle. Ads read: “Buy Robert Taylor’s bed or, if you like, the one Barbara Stanwyck slept in.”

11- Barbara moved into a new apartment with her poodle Missy. “I’ve had plenty of dogs but my namesake was the dog of my life.” Now she has a cat named Tiger.

12- When movie offers stopped pouring in, Barb turned to TV, kept busy on Zane Grey Theatre (a.), other top shows; later had own Barbara Stanwyck Show in 1960-’61.

13- Raymond Burr’s affections seem to have startled Missy the night they won Emmys in ’61 (“Best Actor,” “Best Actress” in a series).

16- Barb and Robert Taylor surprised everyone when they agreed to co-star in The Night Walker. Here they chat at ’64 cast party.

17- Though Barb may have had difficulties with her son, she has always adored children. In ’64 she became co-guardian with Mrs. Danzig (r.) of these three teen-age girls.

2- Ladies of Leisure, 1930. Frank Capra sent for Babs, who got part without a screen test—it made her a star. Co-star Marie Prevost an phone.

3- So Big, ’32. She played woman of various ages opposite George Brent in film of Edna Ferber story. She never wore makeup off-screen.

4- Annie Oakley, 1935. Another hit for Babs with Preston Foster. Same year she varied roles doing Woman In Red. w. Gene Raymond so as not to be typed.

5- Hit Brother’s Wife, 1936. This pic and This Is My Affair, ’37, were two films Babs, R. Taylor did pre-marriage; during marriage they never teamed

6- Stella Dallas, 1937. The sincere mother she played is one of Babs’ favorite roles; it won her 1st Oscar bid. Anne Shirley stands at right.

8- The Lady Eve, ’41. Henry Fonda found “Missy,” what her friends call her, unusually hypnotic. She had red tresses in those days.

9- BalI Of Fire, ’41. She played a strip-tease artist, Gary Cooper a professor in this comedy which won her 2nd Oscar bid (she’s never won).

10- Lady Of Burlesque, 1943. Missy had the experience to rely on when she did the splits, other dances aided by Pinky Lee.

14- Titanic, 1953. Barbara was wife of Clifton Webb in story of historical disaster. In past, producers urged her to dye gray hair blonde, but she believes in being natural.

16- Trooper Hook, ’57. After western w. Joel McCrea, movie offers were few and far between; she turned to TV work.

17- Walk On The Wild Side, ’61. Barb returned to the big screen playing a New Orleans madam—w. Capucine.

19- The Night Walker, ’65. Was Bab’s 81 st film. Reunion w. ex, Robert Taylor (happily wed to Ursula Thiess), ran smoothly in this chiller; bitterness she felt toward Bob, life had turned into wisdom in ’55.