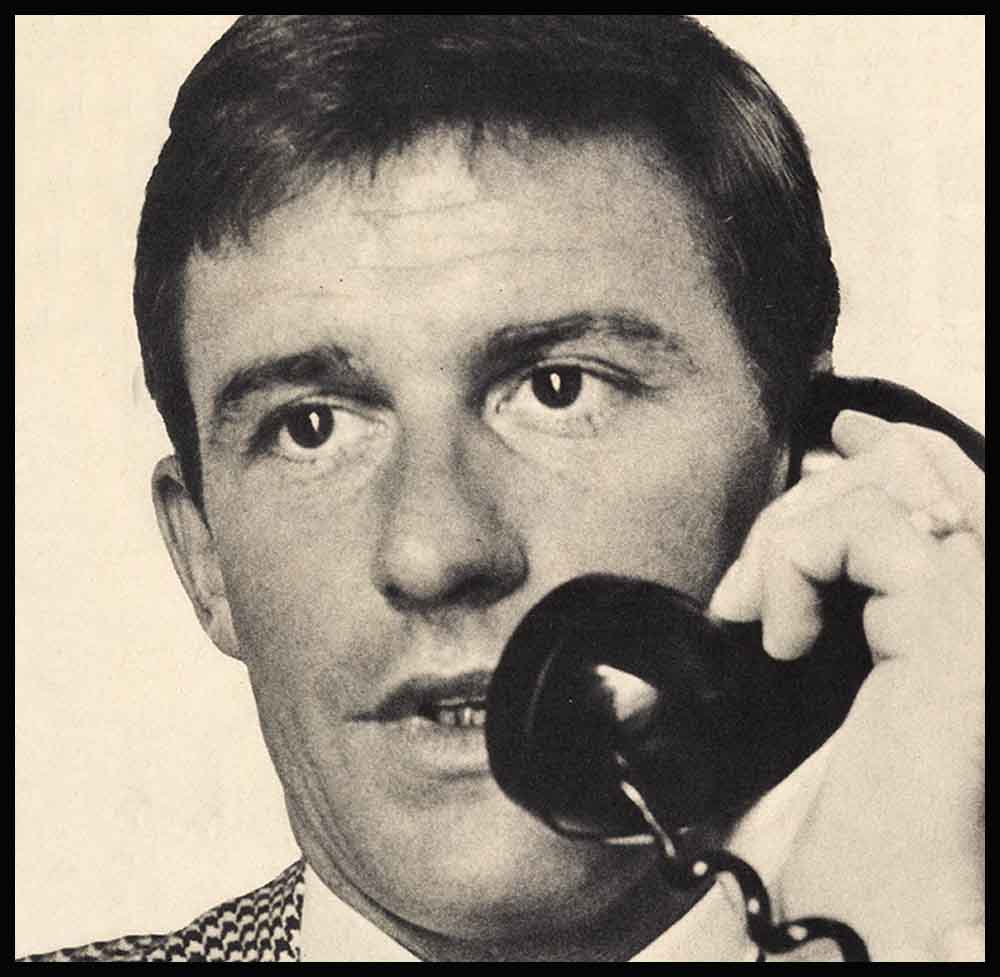 For Roody’s Fantastic Life In Pix

Roddy McDowall knows more about his famous friends and co-stars than anyone-they can’t resist confiding in him. His sudden surge of success is measured by the company he keeps-and these super stars can only trust that he’ll never sell them short.

Roddy doesn’t feel right about going to the movies in the day time, thinks New York should have more statues, and collects strange curios to remind him of his stupidity.

The only things Roddy McDowall selis are his fabulous photographs of the stars and his unlimited talents—his pictures are for the public eye, but how private is his private ear? He could be the biggest gossip with the hottest details if he wanted to reveal what he’s observed and what he’s been told over his 25 years in Hollywood. Elizabeth Taylor, whom he photographed to illustrate her recent biography, considers Roddy about her closest friend; Julie Andrews, another beauty who has posed for him, finds Roddy charming company when hubby Tony Walton is out of town; then there is his life-long friendship with Judy Garland and his companionship with Sybil Burton. Such friendships have frequently thrown him into the eye of many a publicity hurricane. When he returned from Rome after being co-star and confidant to Richard and Liz during the making of Cleopatra, he was inundated with questions about the affair of the fiery twosome. It was then that Roddy formulated a code which he maintains as faithfully as his bachelorhood. “Why should I gossip about my friends? That would be an invasion of our relationship.

Certainly, interviewers are not particularly interested in my telling them, for example, that people are always surprised when they see how tiny Elizabeth is in person; that in a friend’s living room Judy Garland is one of the funniest, most amusing women alive; that I used to tap dance with Marilyn Monroe when she was 17, when her entire facade was different and she was so inarticulate she wouldn’t talk to anyone. Now I put it bluntly: ‘Do you want an interview with them or me?’ ” There’s no question that Roddy is great copy. A former child wonder, Roddy found that he was a hasbeen at 23. Looking back at the mid-forties when he was pigmy in size but promethean as a box office draw, Roddy recalls that “Hollywood magnates had entered into an ‘unwritten conspiracy’ against growing up in child stars. I was playing 14-year-old parts until I was 23.” In 1951, after more than 65 films, Roddy McDowall, convinced he was running at a standstill, came to New York to discover what acting was really about. “I couldn’t get the parts I wanted,” he says. “I just didn’t have the tools.” Backed by people who had faith in him, Roddy soon got a crack at a variety of roles he would not have gotten a chance to do in Hollywood.

For eight years he successfully spread his talents between stage and TV assignments. Returning to Hollywood in ’59 to play the beatnik poet of The Subterraneans, he proved that he had weathered the transition from child actor to adult performer. Amiable, quick-witted and silver-tongued, he never lacked for female companionship. However, at 37, Roddy still looks upon himself as a “professional bachelor . . . you could say that I make a career of being free as a bird.” One of these days some lady may pin him down but now he keeps too busy with his other adventures.

He shares a major interest in Sybil Burton’s New York discotheque—Arthur—on which he’s already seeing a healthy profit. “There are four of us Principal investors in Arthur, plus some minor stockholders (Richard Burton is rumored to be among them). We knew Sybil is an extraordinary woman who would make a success of the place. But we didn’t expect this much this soon.” Roddy is now reported to be investing his Arthur jackpot in a soon-to-be-opened Hollywood a go-go spot called The Other Place. Tommy Sands, Aaron Spelling, among others, are also kicking in on the kicky venture. In the past three years Roddy has become as well-known for his photo layouts as for his acting. Indeed, he has made a handsome profit from his growing love for photography. Roddy considers his photo assignments an important part of his life, but he hopes the day will never come when it would be a full-time occupation. “I love acting too much,” he admits.

3- Barely eight, Roddy is snapped in the garden of his London home midway between surprise and Napoleonic grandeur. The McDowall home’s dangerous location and Rod’s talent brought the family to the U.S. soon after the war broke out.

4- Roddy attended St. Joseph’s College, London (below, 2nd from left, 2nd row) for formal education, but was clapped into Hanover Academy of Art by mom as remedy for his great shyness.

5- Hanover proved to be more than a remedy for self- conscious Roddy; it was a tonic. He was their star pupil (I. as Little Prince) and just 4 mos. after his family’s Stateside arrival in ’40, Roddy was greeted by Alice Faye (above) at 20th Century Fox.

6, 7- Soon there was little privacy for the young movie star on the way up. Photogs shuttering away as Roddy showered away didn’t upset his youthful equilibrium in the least. But as time passed and values changed, Roddy put the lid on such exposure. Privately, he has similar feelings of the sacredness of certain areas of life: “I couldn’t possibly stand anybody sharing such intimate things as a bathroom, bedroom or kitchen,” proclaimed Roddy at a very recent interview.

8, 9- In ’43, an English boy’s dreams came true at White Rock, Utah when an Indian ceremony made him Chief Little White Owl. When not before the cameras, Roddy pursued such hobbies as stamp collecting and the creation of a universe of his own design, named Fidelis, on a huge 18×18 blueprint. During working hours, thoughtful and always a gentleman, Roddy won the respect and admiration of co-workers twice and three times his age. He chats with Betty Grable on the 20th Century Fox lot.

10- Rod escorts mom Winefriede, whose death last May greatly saddened him, and Virginia to Song Of Bernadette, ’44.

11- Roddy is reunited with dad after he spent a year with British Navy. Dad is still proud of his boy.

12- Rod signs cast for ecstatic fan at N.J. Hosp. for Crippled. He wrote to kids all over U.S.

13- Roddy donned cavalier role in ’45 for Jane Powell as he squired her to House On 92nd Street preem.

14- He admitted to big crush on Lurille BalI when he paid visit to her at MGM when she was making Time For Two.

16- He became entrenched New Yorker (Central Park West apt.) in late 50$. He is buddy of another beard, Sal Mineo.

17- A photography buff for past 6 yrs., Rod’s won accolades for his layouts and portraits of the famous.

18- Friend since their days as child start, Rod was first backstage to hug Judy after ’61 Carnegie concert.

19- Nightlife it the ideal way to relax for sociable Roddy. He shared table with Suzanne Pleshette at dub in ’64.

20- Roddy and Liz Taylor have enjoyed warm rapport that dates back to time she played his leading lady in Lassie Come Home in ’43. Here they talk shop w. Paul Newman. Says Rod, “She’s a beautiful subject to photograph.”

1- Murder In The Family, ’37. His career began at 8 with this. Recognize Glynis Johns on rt?

2- How Green Was My Valley, ’41. Maureen O’Hara and others in cast took back seat to Rod’s tender portrayal

3- This England, ’41. “I enjoyed being in movies when I was a boy. As a child you’re not acting. You really believe.”

6- My Friend Flicha, ’43. “Ah, if an adult could only act as a child does, with that insane, playing-soldiers spirit.”

7- Lassie Come Home, ’43. The first of the famous Lassie films. The beginning of a life-long friendship with Liz Taylor.

10- Thunderhead, Son Of Flicka, ’44. Sequel to the first Flicka story. Roddy had a erack at some very dangerous riding.

12- Kidnapped, ’48. The end of Phase I in his career; the studio failed to renew his contract. He was too old.

14- The Tempest, ’60. He played Ariel in TV version of Shakespeare’s comedy; just one of many television endeavors.

15- The Longest Day, ’62. Roddy played a cameo part in this epic. The producer Darryl Zanuck had given him his start.

16- Cleopatra, ’63. Reunited with Liz, he played Octavian in this bonanza. She helped him often.

17- Shock Treatment, ’64. He played a murderer in this thriller. Continued to defend Liz Taylor. He has had “wonderful offers since Cleo.”

19- Inside Daisy Clover, ’65. Roddy’s able to pick and choose, so he picks the best ones, of course. Here he’s seen with Natalie Wood, who plays the title role of a neurotic ingenue who takes her Occidental success with nonchalance.

20- That Darn Cat, ’65. In this Walt Disney Production he joins Hayley Mills, Dorothy Provine, and Dean Jones. Each time Roddy does a movie, he brings along his camera and shoots special features for national mağazines. His hobby has turned into a lucrative profession. Corning up? The Loved One for MGM, and Lord Love A Duck for George Axelrod and U.A.