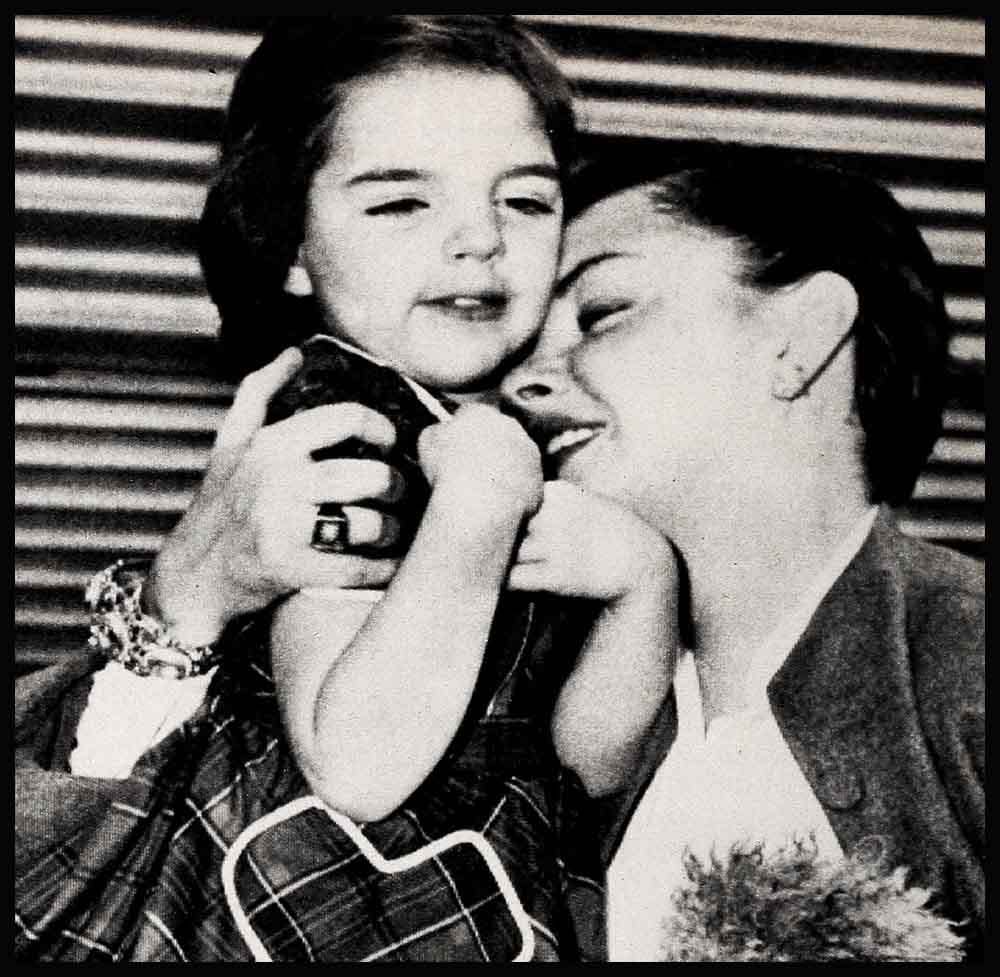 Will Shirley Temple marry Charles Black? Can the Elizabeth Taylor-Nicky Hilton marriage survive? Is there a film future for Judy Garland? How about Peter Lawford and Sharman? What goes with Lana Turner, Bette Davis, Ingrid Bergman and Rita Hayworth? Will Jane Wyman succeed where Ginger Rogers and Joan Crawford failed? Are there wedding bells ringing in Farley Granger’s future?

Come closer, kiddies. It’s time to trot out the annual Graham crystal ball and make with the movie star predictions for the New Year, 1951.

Yes, I see a wedding for Shirley Temple and Charles Black. The date may have been announced by the time you read this. But I’ll be brave and go out on a limb. New Year’s Day? Of course you never know how a marriage is going to be until you live with the guy. But I’ll make another prediction about Shirley. This second mating will take. She’s learned an awful lot about life in general and Shirley Temple in particular since this time last year when she had just divorced John Agar (December 5th) accompanied by the outraged screams of the world’s citizenry. Shirley discovered the editorial way that you can’t have your cake of divorce and eat public approval. Not .f you are Little Miss Marker, that is. But how can you rap a girl who hasn’t been in a night club for one whole year and who spends four days a week as an unpaid nurse with the children in the Los Angelas Orthopedic Hospital. Good luck, Shirley and Charles.

Only a fool would predict more than a day ahead for Elizabeth Taylor and Nicky Hilton. Okay, so I’m an idiot. But I don’t believe they’ll get a divorce in 1951. They’re in love They want to stay married. And now I’ll tie-in some unasked-for advice with my prediction. To Nicky—don’t be quite so bossy To Elizabeth—don’t be quite so sensitive. To the press—let’s give them a chance.

Everyone is predicting that the Bette Davis marriage to Gary Merrill has to end before 1952. I thought so too until I heard Bette’s dialogue in her smash hit picture, “All About Eve.” Remember those speeches from Bette playing an aging star actress, that nothing really matters to any woman even those with a career, except being able to turn around in bed, and there he is—your man. Bette is just that kind of girl in real life. She has to have her man, and she has to be married. I don’t think Gary will be her last husband, but I predict he will last longer than Bette’s dearest friends and enemies expect.

Lana Turner yelled, “It’s a lie,” when a commentator stated one sweet Sunday evening that Lana’s picture with Pinza, “Mr. Imperium,” was the swan song for Hollywood’s sexiest blonde. But I’m going along with the commentator. I predict Lana will retire from the screen. Maybe not this year but very probably next. Lana’s on the lazy side. She likes to eat, drink, be merry, and sleep late in the morning. When and if Bob Topping decides to move back East, that is when Lana will write “Fade-Out” to her glamorous career. I’ll be daring and say I believe they will stay Mr, and Mrs.—at least until I make my predictions for 1952!

What does the crystal ball reveal for Judy Garland? Brother, how I wish I knew. The tragedy clouds are still there. So is the emotional insecurity. So is her wonderful and great talent. The last time I saw Judy—at the Bing Crosby radio show—she said, “Sheilah, I feel fine, but I don’t care if I never make another movie.” I do. And I know you do. I’d give anything to predict that she will.

Rita Hayworth is like Lana Turner—she likes soft living and late hours, night and morning. I predict that Prince Aly, who loves the limelight will almost have to whip his languid wife into wanting to resume the career she wants to forget. Of course she can always postpone the energetic future by having another baby. Rita wanted thirteen children with Orson Welles. I predict she’ll have ’em with her Moslem prince—unless he spends too much time in the Casinos.

Ingrid Bergman will resume her career in 1951—if not before. No one was fooled, not even Ingrid, when she dished out that big slice of baloney about permanent retirement, In the first place Roberto is very mercurial in the love department and a lady would find herself unable to make a career of just being his dutiful wife. From everything I know of his passionate past, he would get very bored with such devotion Besides, Roberto is too commercially artistic to waste Ingrid’s great acting ability in the kitchen. And Ingrid is much too smart to make ravioli when she can be making sweet cinematic triumphs and lire. She has always appreciated money.

Will Sharman Douglas change her name to Mrs. Peter Lawford in 1951? I predict that she will. Peter says no. Sharman says notning. But their actions speak for them. Even during the times they are apart, they are always in touch by telephone. And when a thrifty lad like Law- ford makes phone calls from Hollywood to London and Australia to ditto–Sister, you can write that down as love. I also believe Pete is breaking down the marriage objections of Sharman’s Ambassador father, Lewis Douglas. Or why should he invite Pete to his ranch, both with and without Sharman? And before the blonde charmer came to Hollywood this last time, she herself called Pete from Arizona and asked him to meet her at the airport. She stayed at lawyer Neil McCarthy’s home. But the man she saw, day and evening? The ecstatic, the suave debonair actor, of course.

When “Showboat” is released in 1951, I predict that Howard Keel, who plays Ravenal, will be as big a singing star as Nelson Eddy ever was, perhaps bigger.

The big acting surprises for 1951, female division, will be Janet Leigh and Jane Powell You’ll practically pass out as I did when you see a tough Jane, in tight sweater, tighter skirt, talking out of the side of her mouth and oozing with oodles and oodles of sex appeal in “Royal Wedding” with Fred Astaire. Any resemblance to the sugar and spice of the previous Powell is pure coincidence.

Little Janet Leigh has always been able to give Jane Russell points in the poitrine department (see your French dictionary). But wail until you see what RKO’s boss Howard Hughes has done for and to demure Janet in “Two Tickets to Broadway.” She’s a sophisticated, smart high-steppin’ gal with a future so bright it’s blinding. Move over, Betty Grable—we’re discussing the next pin-up queen.

Claudette Colbert told me when she was forty years old that when she reached the ripe age of forty-five, she would retire as an actress and make way for the younger of the emoting species. Well, Claudette will be forty-six in 1951, but I’m predicting she will continue to act. And why not? She’s still terrific. The screen would be very barren without Claudette’s special brand of brightness.

I predict that John Derek, the big young actor discovery of 1949, will drop heavily in popularity during 1951. Unless his studio comes up with pictures to match John’s debut in “Knock on Any Door.” A star is only as good as his last picture. And John’s last good picture was too long ago.

Jane Wyman and Greg “Beau” Bautzer are the titillating twosome of the late 1950 cycle. What of their romantic possibilities this coming year? Null and void I would say I predict Jane will be no more and no less successful with Greg than were Joan Crawford or Ginger Rogers. I don’t believe the movie star has yet been born who can win from the elusive lawyer an honest-to-goodness request for marriage. It seems you can lead Bautzer to the brink, but you can’t make him propose.

Greg did marry once—she was Buff Cobb the granddaughter of the late humorist, Irvin S. Cobb. It was a very brief marriage. People with long memories here say that Greg was only really in love once in his life—with Lana Turner They were engaged just before Lana eloped with Artie Shaw.

Stewart Granger is the Errol Flynn of 1951, in my predictions book. If he hasn’t swept you off your feet in “King Solomons Mines,” he will in “Scaramouche” and “Ivanhoe.” He’s dashing, debonair, calls you darling the first time he meets you and has a sweet tooth, in every sense of the word. He likes his ladies young. He first wanted to marry Jean Simmons, to whom he is now engaged, when she was a baby of seventeen.

My Academy Award prediction for ‘I March, 1951 is—Gloria Swanson for the girls The boys aren’t as easy. But these will be nominated—Jose Ferrer (“Cyrano”), Spencer Tracy (“Father of the Bride”), Louis Calhern (“Magnificent Yankee”), William Holden (“Sunset Boulevard”), George Sanders (“All About Eve”).

Gloria’s performance as the old and forgotten silent film star in “Sunset Boulevard” was really terrific. So was Gertrude Lawrence in “The Glass Menagerie.” And Bette Davis and Anne Baxter were pretty wonderful in “All About Eve.” But Hollywood is a sentimental town. It makes such a good human interest story for Gloria, the forgotten glamour queen of the silent era, to win our greatest tribute. I can almost hear the thunder of applause as Gloria walks off the stage clutching her golden Oscar. I also predict she will have as many problems getting another good movie as Oscar winners Luise Rainer and Olivia de Havilland.

As for Photoplay’s Gold Medal Awards for the most popular picture and performances for the last year, I predict Olivia de Havilland, who topped the girls at the halfway mark in the September, 1950, issue, will win for her beautiful job in The Heiress.” And I’ll bet “Father of the Bride” will give all the other 1950 pictures a run for first place.

I predict: Roy Rogers will be a television star in 1951. Roy wants some of the Hopalong Cassidy gravy . . . That Joan Fontaine will not divorce Bill Dozier—their financial status is too complicated . . . That Jennifer Jones will stay in Hollywood for all of 1951. Husband David Selznick has dozens of pictures lined up for Jenny in Europe. But she has the stork lined up for a landing in the spring A baby for the Cary Grants—they’re doing everything in the Stork Book . . . The separation of Linda Darnell and Pev Marley will be finalized with a divorce . . . Tony Curtis will be the new number one glamour boy, as big as Van Johnson, Robert Taylor, and John Derek before him That Clark Gable and his Sylvia will not part, as the gossips predict . . . That Hedy Lamarr will give up her career if she finds the wealthy husband of her dreams . . . And that movies will be better than ever . . . Happy New Year!