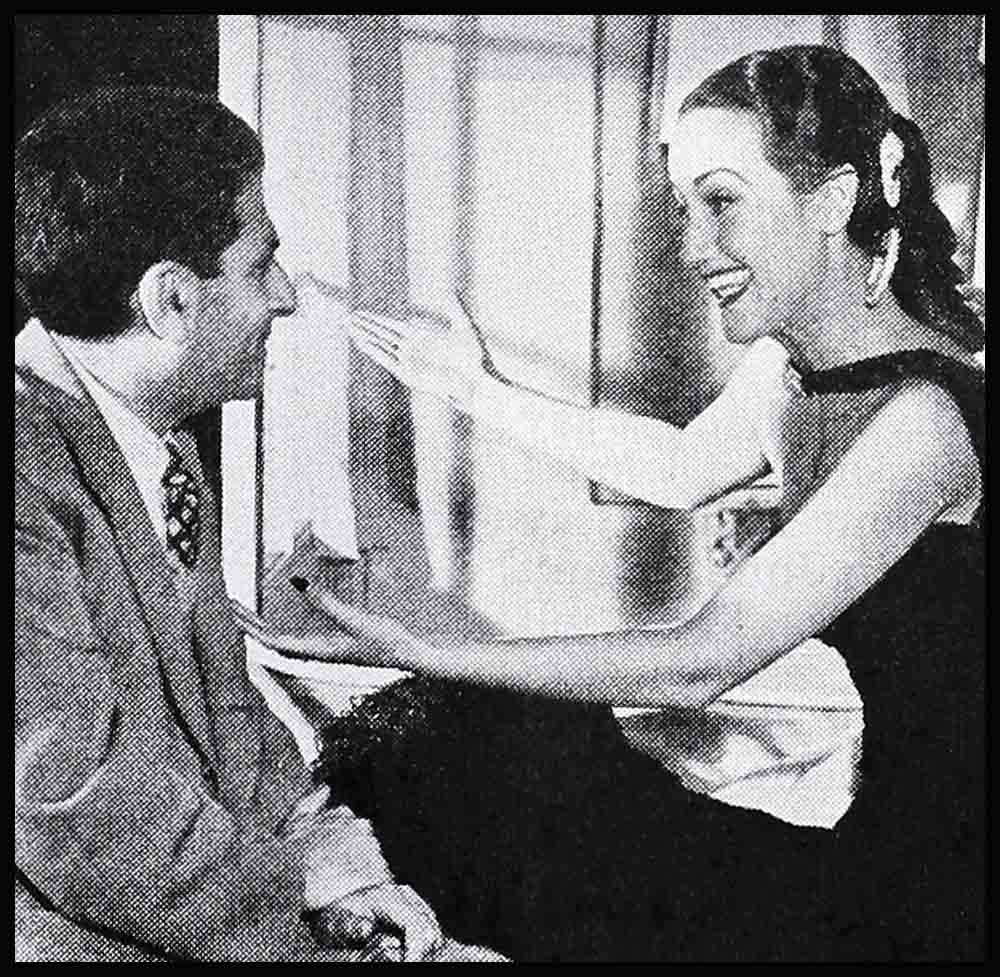 I have been informed that Greer Garson believes that I don’t like her because I once wrote that she is too much of a lady. She has asked me to visit her, but I haven’t done so for I like her so much I might not be a perfect gentleman . . . Lauren Bacall, I want you to know, is influenced so by Humphrey Bogart that off the screen she talks more like Bogie than he does . . . So far as I’m concerned, no singer has come along to even question the supremacy of Judy Garland, in the female department, and as for the males, Bing is still the king—go on, throw your bobby socks at me. The runner-up is Harold Arlen, the songwriter, who should have a radio program. He sings his “Bloomer Girl” songs better than the players in the show . . . I am getting a little tired of Betty Hutton’s display of energy, and I guess Betty’s getting a little tired from displaying it . . . I like Hugo Friedhofer’s remark that any man who marries for the second time doesn’t deserve to lose his first wife.

I can recall when movie audiences were very prissy, and their heroes had to be pure and unmarried. Francis X. Bushman, the Clark Gable of the silents, found himself practically through when his admirers discovered that he was a married man. Now the gals swoon over married men, even going so far as trying to tear the clothing from them. Nothing a movie hero does can affect their love and devotion, as witness Errol Flynn . . . I admire Sam Hoffenstein, the scenario writer, for his excellent poetry. My favorite poem of his, which is not included in any collection of his verse, tells the story of his life. It is: Wherever I go, I go too, and spoil everything.

I believe that the most promising of the younger actresses, regardless of what any poll discloses, is Angela Lansbury, and I predict that she will do great things on the screen . . . I can’t, however, get excited about Carole Landis, who puts up a good front, but is not in a class with, well, say Angela Lansbury . . . I like to go strolling about the streets of Beverly Hills, for the shopping district there has a mark of distinction and a quality all its own. It is fascinating to watch someone like Ingrid Bergman marketing, and see that she is as concerned about points as you and you. It was Tom Jenk, by the way, who, while discussing these modern times, said, “Money isn’t everything. You gotta have points.” . . . There’s a regular wolf Circuit that the pretty young actresses play, and it’s a sure bet that every newcomer will have a date with Peter Lawford. I do wish that, although it is strictly a gag, Peter would remove the following sign from his den: “Do Not Disturb—Wolf At Work.”

I have made it a practice—what do I mean practice, it’s almost a business—to know how Lana Turner, Betty Grable, Rita Hayworth and Ann Sheridan, etc., sleep. I can tell you that Lana wears a nightgown, and that Betty sleeps in pajamas, even to such detail as to whether it’s the top or the bottom. In fact, I will tell you that Betty is the tops . . . As proof, and it is the only proof permissible, I have been photographed on a couch with Ann Sheridan, with Rita Hayworth in a similar setting, and now, as you can see on the opposite page, I have been photographed with Dorothy Lamour on a bed. You can also see it is perfectly harmless and innocent. Honest . . . Marguerite Chapman, who is a cutie, has told me that she is shopping for a suitable nightgown, something different and very attractive, and that when she finds it, she will let me know. It’s all in the line of duty, I repeat, and when Maggie gets that nightgown I’ll be there, and I’ll let you know about it. Gee, the things I do for my readers!

I admire Frank Sinatra for his desire and courage to make speeches about juvenile delinquency, and if there is any person that the youngsters will listen to, it is Frankie-boy . . . I know of no actress who resembles a movie actress more than Joan Crawford. Even to the newcomers in the business, Joan Crawford is their idea of what a movie actress should be, and look like . . . I don’t know, but every time I see Maria Montez all dressed up, she looks like she got all dressed up, if you know what I mean . . . I go for Fred MacMurray’s candor, for, discussing “Double Indemnity” with me, he said, “I wish I weren’t in it, for it’s a good picture and I’d love to see it. But every time I do, I’m so nervous watching myself that I can’t really see and enjoy the picture.”

I always like to wander into the offices and dressing rooms at the studios and look at the pictures and signs on the walls. A man who is connected with what is called “the art” at Paramount has an unusual photograph in his office. It is a picture of a pretty girl, and next to it are listed the various things the Hays Office won’t allow to be shown in a motion picture. They are: Law Defeated. Inside of Thigh. Lace Lingerie. Dead Man. Narcotics. Drinking. Exposed Bosom. Gambling. Pointing Gun. Tommy Gun.

And this photograph shows the girl, Peggy Brooks, in lace lingerie, one leg placed on a chair, and she is pointing a gun at a dead policeman on the floor who has a tommy gun next to him. There is a bottle of whiskey on the table, some narcotics next to it, and a deck of cards is spread out on the floor. This one picture shows everything that the Hays Office won’t allow, but since I saw it I’m telling you about it for I want you to know everything about Hollywood that I know.

I am very fond of Veronica Lake, and although some people insist that she is difficult, I find her very easy to get along with, and an interesting person to be with for dinner and merely gaze across the table and look at . . . I don’t know of any two fellows who have taken their success better than Sonny Tufts and Van Johnson. They sincerely act as if they are surprised by it and grateful for it, and I believe they are . . . I know of no actress who is better fun on a set than Binnie Barnes, and I completely detest those performers who believe that they are giving out with art and must be alone, Generally they discover that audiences leave them alone . . . It is amazing, I say, how Linda Darnell has developed into a glamour lady, and I am using the correct word when I say developed . . . I am especially fond of that story about a certain movie producer who, wanting to get away from it all, bought a ranch and hired experts to plant avocado trees. When this producer checked his orchard over, each tree had a little card on it. And on the card was written a fancy botanical term for each type of avocado. Then one night the wind blew all the cards off the trees. The next morning the producer printed his own cards, naming each avocado after a famous sweater girl, and that’s Hollywood for you!