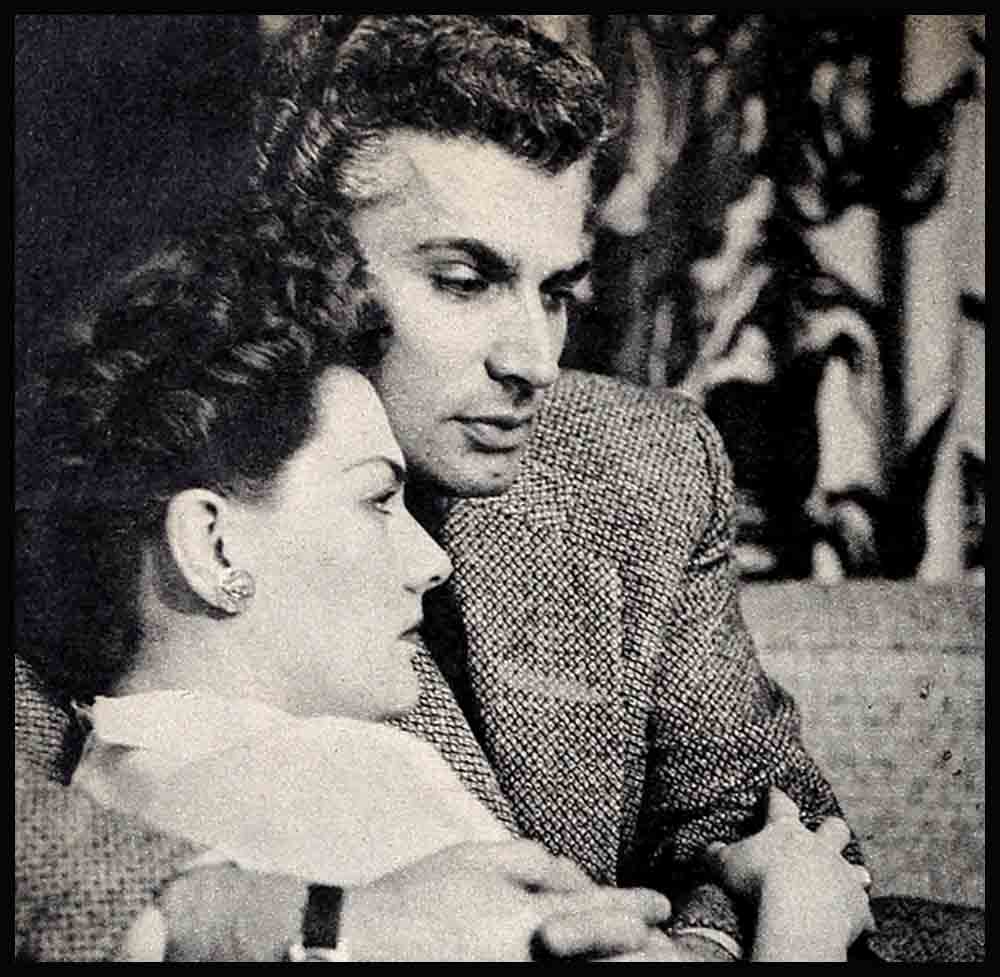 What Hollywood Is Whispering About?

“Really, what?” inquired her escort.

“See? Over there. Jeff Chandler and his wife. He just leaned over and kissed her cheek.”

“But they’re supposed to be fighting. They’re about to separate. Why, everybody knows Marge is practically on her way to Reno.”

Don’t look now, but there goes another rumor. As far as the Jeff Chandlers are currently concerned, it’s going straight out the window. But from time to time, it will crop up again as it has in the past.

Because they are two definite personalities, Jeff and Marge Chandler will always share a difference of opinion upon occasions, and invariably these differences will bring whispered hints of trouble brewing. When it happens, the Chandlers become automatic targets for the gossip columnists, and this they fully realize.

Once, after a quarrel, they went so far as to separate. And when they reconciled, few expected it to last. Since the reconciliation, however, the bond between these two has deepened and strengthened. A vacation at Laguna Beach, away from studio pressure, gave them uninterrupted time to say all the things that should have been said before this. At the present time, they’re behaving like newlyweds. Following a recent party, Jeff and Marge ended up at Judy Garland’s house for scrambled eggs and some of Judy’s special brand of singing. The Chandlers held hands as they listened. Occasionally, when Judy sang a love ballad, the big fellow leaned over and pressed his cheek against his wife’s. A year ago he would have been too self-conscious for such honest demonstration.

When they celebrated their sixth wedding anniversary, Jeff was in Pendleton, Oregon, making “Sioux Uprising.” With two days off, he flew home to Marge to celebrate. Apparently, Jeff’s home to stay.

While all of Hollywood has been discussing the Chandlers, the Tyrone Powers have been giving their intimate circle of friends a great deal to talk about. The general opinion is that Linda Christian secretly enjoys being the cause of those raised eyebrows. A true Continental, with several languages at her command, Mrs. Power makes no bones about saying that Hollywood parties are, for the most part, boring.

There is every indication of the restlessness she feels and, at the Van Johnson party especially, Linda’s attempt to inject a little “life” into the festivities became the talk of the town. Her conversation is startling, and the semi-nude statue she posed for that now graces her garden is still a topic for conversation. Another topic is the verbal battle between Linda and Lita Baron Calhoun. The cause of it was a shocker even to their best friends.

Yet, if Tyrone Power is aware of the all too obvious situation, if he is unhappy about it, or cares at all, not even a mind reader would know it. His eyes are always on Linda and they are adoring. He never loses his temper with her. He smiles with amused acceptance over her antics. At every party, he is always charming, gracious and subdued. When Linda wanted to act again in “The Happy Time,” he voiced no objections. He worships his little daughter, Romina, and to all evidence is a happily married man.

Linda loves foreign countries and the Powers will undoubtedly divide their time between the United States and Europe now that Ty is free to make his own contractual arrangements. There are a few who believe that Linda’s restless nature will end the marriage, despite Ty’s present contentment. There are more who believe that her ego is riding for a fail unless she pulls a few “stoppers.” In the meantime, Hollywood continues to watch—and continues to wonder.

Of all the stars, Martin and Lewis seem to have the most infallible capacity for weathering all the adversities of Hollywood. Lawsuits, studio feuds, gossip, and separation rumors seem to roll off their expensive backs. The boys come up smiling and keep everyone roaring. Both members of the tempestuous team have been occasional targets for the snipers.

Not so long ago, Dean Martin’s name was whispered in connection with a young and beautiful leading lady. Soon after, his name was replaced by Jerry’s. However, if there was truth behind the talk, it was never proved. Dean seems honestly happy in his marriage to blonde and beautiful Jeanne Martin. Being a consistent “relaxed” type, if there was anything wrong, Hollywood would probably be unaware of it until it reached a crisis.

While nothing seems to surprise Hollywood (even trouble in the Dean Martin household, if it ever occurred), everyone would be startled right out of their seven year contracts if anything went wrong between Jerry Lewis and his brown-eyed Patti. As much as Martin and Lewis are dependent on each other professionally, that’s how much Jerry depends upon his adoring wife. Despite the rumors which have touched their doorstep, Patti (he calls her “Mommy”) is actually Jerry’s alter ego. It’s difficult to believe there could be a Jerry Lewis without Patti there to give him love, courage, and guidance.

Ingrid Bergman is perhaps the most tragic figure up for speculation in the rumor-market. Ingrid, who gave up her daughter, her home, her Hollywood career for Roberto Rossellini, has never been able successfully to avoid the spctlight. Before the birth of Isaballa Fiorella and Isotta Ingrid, Ingrid was kept busy denying the stories of how difficult it was to live with Rossellini. With the arrival of the twins, she thought surely that the troublesome talk would stop. But it hasn’t. Now come reports linking the names of Roberto and Anna Magnani, the fiery Italian actress who was once the great love of his life. Letters from Rome say that Ingrid is terribly hurt. It has also been said that In- grid has been seen dining with other men. These, too, have been denied. But Hollywood still whispers—and the whispers grow louder.