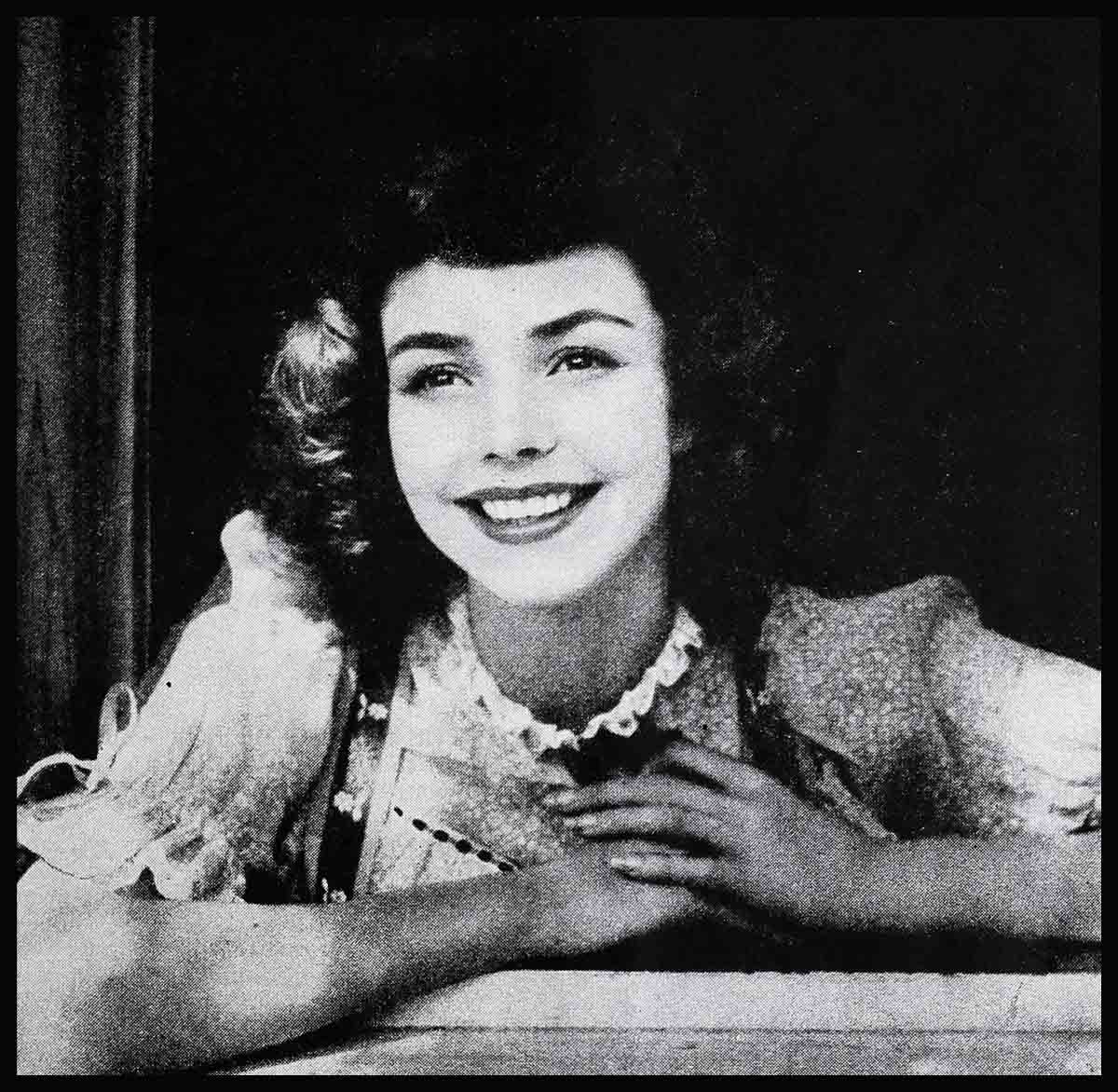 Jennifer Jones Speaks For Herself

Jennifer Jones sat in the Superior Court of the City of Los Angeles on the morning of June 20, 1945, getting her divorce from Robert Walker. Hidden behind her reticent words was the outline of a tragedy of incompatibility of two very nice people.

She and Mr. Walker had separated on November 7, 1943, she said. One of the troubles had been that Mr. Walker wanted her to go into radio, against the advice of her manager.

“You can’t get a divorce on that,” Judge Charles E. Haas interrupted. “Did he stay out all night?”

The Judge asked, “Do you know if he was working?”

“Now we’re getting somewhere,” the Judge promptly informed her “That’s grounds for divorce.”

Thus a marriage ended. Jennifer and Bob got joint custody of the two small Walker sons, Bobbie, five, and Michael, four, but they were to continue living with their mother. There was no alimony or property settlement. “Mr. Walker has been most generous in his care of the children,” Jennifer testified.

So that was that, and the big subject that Jennifer Jones has refused to discuss for more than a year and a half was, safely, a matter of history.

Jennifer Jones has given no interviews during the eighteen months that she has been living alone. You may have seen stories on her, but they have been gathered from other people, not from this beautiful, highly wrought young star who already possesses one Academy Award and who will undoubtedly garner more of them in the future.

When she agreed to talk for publication for Photoplay exclusively, it was with the distinct understanding that the subject of her parting from Bob Walker was not to be brought into the conversation, though naturally it was agreed that Photoplay had every right to publish such testimony as a matter of public record.

Even at that, the interview was hedged about with inevitable reservations. Said her studio, “We can’t guarantee that she will talk at all. Jenny’s like that. Either she talks p so fast you can’t stop her, or she m doesn’t say two words.”

We met at the Savoy, a Beverly Hills restaurant that is quiet and conservative.

The first thing that would have impressed you was how her beauty has increased in the last year. She wore a beautiful beige gabardine suit that was a delightful background for her red-gold hair, which she wears parted in the middle and hanging down fluffily around her face. She is a slim, leggy creature and with her feet shod in low-heeled moccasins she looked as though she had come fresh from classes in Hollywood, rather than from a big impressive place in Bel-Air.

But the moment she started to talk, she dispelled that illusion. And how she did talk! Her mind darts from subject to subject, her eyes flash, her lovely hands make graphic gestures. Perhaps it was because she was under the spell of Pearl Chavez, her newest role, which is a fiery part, but Jennifer that day was not either the spiritual, slow-thinking Bernadette or the wide-eyed ingenue of “Since You Went Away.” She was a girl of such fire, spirit and yet such curiosity that your heart went out to her completely.

She said in her quick, exquisite voice: “I’m not sure that I’m a good mother. I’d like to be, but is a career mother ever as good as the domestic type mother? Do you think that perhaps the vividness we bring into our children’s lives may make up for some of the helter-skelter we bring, too, the having to dash away to the studio in the mornings, the going on location trips, and all that? It is just as important to realize that children can’t have everything as it is to know that adults can’t have everything either. I think it is important for the children to learn that, too. “I want to move when I can. Bobbie, my oldest boy, hasn’t been too well this past winter, mostly colds, but that frets me. Sometimes I feel an evil star hangs over my house. It’s the same house I lived in when I first came to Hollywood. It’s a big old barn of a place. I’d like to find a smaller one, one with a swimming pool, but I won’t have the boys near a pool until they can swim really well. Lately I’ve been thinking I’d like to have Chinese help, if I can find it. Maybe that impulse came from reading a book of Chinese philosophy I found somewhere. It sounded so peaceful and cool. I read it, trying to get myself into the same mood.

“People always apply the word nervous to me. I don’t think it is quite the word for me. Maybe temperamental is. I’m not afraid of the word temperamental when it’s used to mean moody and reacting to things. When it’s used to mean flying off at things, then it’s bad. I’ve not done much of that, but when I have, I’ve found it hurts me, so much, me personally. I suppose it’s a form of discipline you have to learn, to suppress the angry, explosive moments, but to stay sensitive, just the same, to the real emotional ones, to laughter, happiness and such.

“Do you think everybody is interesting? I do. I like to watch people. I like to hear them talk. Right now I’m fascinated by Lillian Gish. She tells me about the silent days in pictures, when you had to depend upon pantomime entirely to get over scenes. After all, there are just so many things you can do with your face! Lillian told me that she began going to insane asylums to see how people reacted there, and in ‘The White Sister’ she borrowed some of these crazy looks and expressions for the scene where she heard that her lover had died. Isn’t that fascinating?

“I hope I can always play people with force. Some people thought Bernadette was dull, almost a victim of fate, but I thought she was always a girl of terrific power, of force within herself. The girl in ‘Since You Went Away’ had less character, but she was not weak. But Pearl Chavez in ‘Duel In The Sun’ is absolutely primitive, and the girl I play in ‘Love Letters’ is perfectly wonderful. I thought Gene Tierney was great in ‘Laura,’ but I’m still glad I didn’t play in it as was originally intended. I really wouldn’t have been good. There was, for me, nothing I could get my teeth into in the part.

“That’s what’s so wonderful to me about Ingrid Bergman. She can take any part and she makes it positively shining. Take her first American picture ‘Intermezzo,’ or even ‘Casablanca.’ That girl in ‘Casablanca’ was not much of a part. She was an almost straight ingenue role. But Ingrid made her a great woman—oh, what shall I say?—lyric and glistening.

“Ingrid and I are seeing all the Garbo pictures together. We saw ‘Camille’ the other evening, and I couldn’t move after it was finished. I just sat and cried and cried. Why, why didn’t Garbo get the Academy Award the season that was released? There simply couldn’t have been a better performance that season. Do you realize Garbo has never been typed?

“People say they hate Hollywood and that it does dreadful things to one. I haven’t anything but praise for it. How could I, when it has done so much for me? I’ve had wonderful parts, played in remarkable casts, had superlative direction.

“Do you know I’m twenty-six years old? I’m not ashamed to tell my correct age, because I consider myself a character actress already. That’s a fine thing. You don’t have to go through the time glamour girls do, when after your first youth is gone, you have to spend years re-educating the public to accept you as an actress.

“I used to be all one-track, all career. Now I’m beginning to broaden out a little, beginning to read. But sometimes I have to be alone, all alone, and I never know how long those alone moods will last. The need for aloneness is hard for other people to understand, I guess. But I think it is important to understand that some people require more of it than others.”

She looked at her watch and gave a quick little gasp. “I’m late,” she said. “I’ve got to go.” She smiled that warm and sweet smile of hers, that has such a quality of little girl-ness about it. “I was late arriving, wasn’t I? It’s awful the way I never get my time straightened out, but someday I will. I’ll have to. There’s so much I want to do, that I have to do, so very much.”

Jennifer stood up and moved rapidly out to the parking lot, and with a swift flash of her long legs got into her little car. She whizzed away.

One of the nicest qualities about Jenny is her warm friendliness. She still greets people just as warmly as when she first arrived in town, and she never forgets a face or name. She is never too rushed to be charming.

Perhaps, considering the Oscar she won for her first big role and her glittering life today, it seems strange to say that Jennifer will bear watching. But that is true. Just as in this interview, when she talked apparently freely, and yet concealed her innermost thoughts, she is both highlighted by fame and her own rich talents, and yet, somehow, shadowed, too. One of these days, however, Jennifer will emerge completely and then the world will see a great, a very great, star.