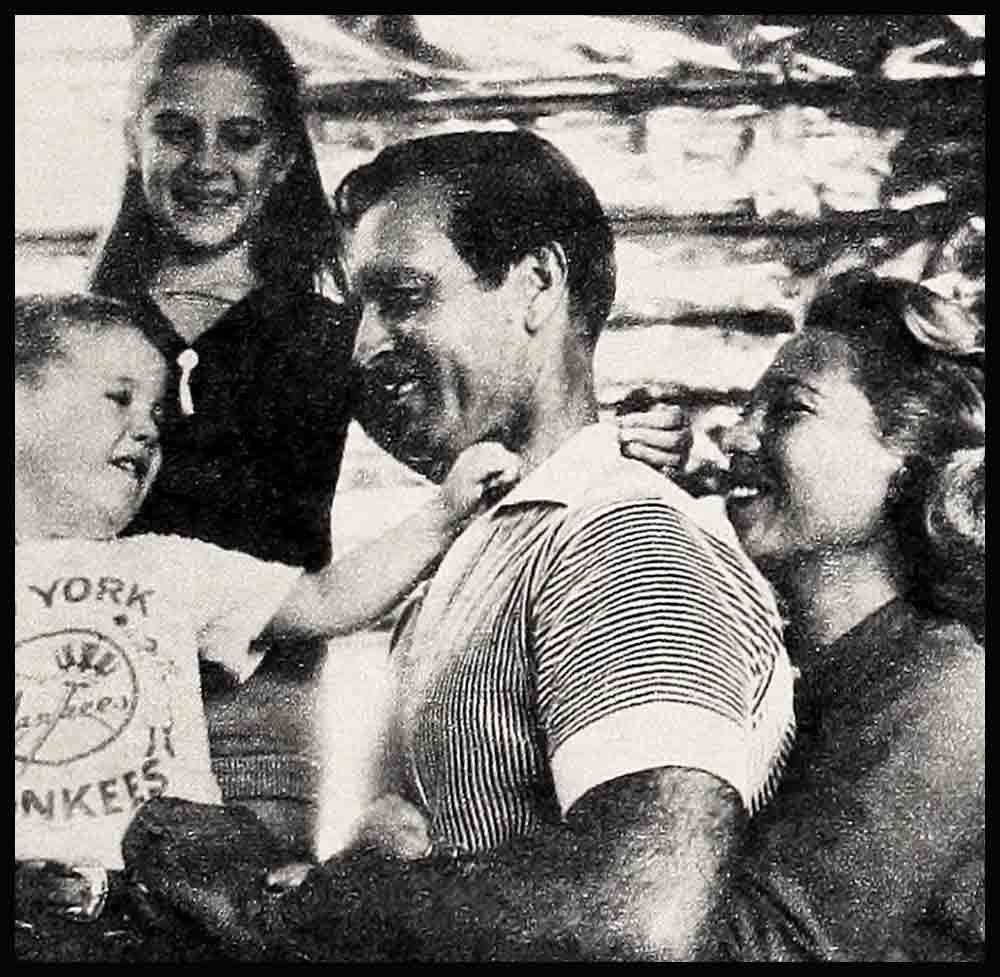 The kid didn’t know. . . . He stood on the sidewalk and gave her his biggest, broadest smile. She looked at him through the car window as she waited for the light to change. She knew he’d do it. All the kids did.

“But not this time,” she begged silently. “Please, little boy, not this minute, this instant. Don’t.”

But he did it. He didn’t know.

He slapped the bundle of newspapers under his arm in glee. His small fingers landed smack on the black headline: “Dinah Shore Divorce Shocks Hollywood.”

Because she knew the kid didn’t understand, Dinah threw him his kiss. It wasn’t easy.

And as the light turned green for go, she knew that it would never again be easy to throw that special, smiling kind of kiss. Not after all the ugly talk.

No one stayed married in Hollywood without suffering the whole routine. It took eighteen years for it to get to the Dinah Shore-George Montgomery marriage. But it got there. And there came a day when the situation had to be explained to the children. And then Dinah watched quietly as her husband picked up his bags and walked out of their house.

“Dinah Shore and George Montgomery have separated. Attorneys are arranging the divorce, for which Mrs. Montgomery will file. . . .”

Most of those close to Dinah tell one and the same story. “It was the Ziva Rodann rumors that really hurt Dinah,” they say. “George was seven thousand miles away. He had neglected to call her as he’d promised, and Dinah cried like a baby. She was dying to hear his voice. Instead, she heard that he’d been traveling with Ziva from the Philippines to Hong Kong to Tokyo, and that an Italian prince had challenged George to a duel over Ziva.

“Once those things made the papers, everybody got going on the marriage. Dinah took it as long as she could. When George came home, they had it out.”

So went the talk—then and now—about Ziva, George’s lushly beautiful leading lady on that far-off safari, and about another beauty nearer to home, Diane McBain. But what few knew was that right up to the bitter end, Dinah wouldn’t listen to any of it. She still insists that what tore down a good marriage after eighteen years was “being apart so long and so often.” The gossip couldn’t do it—not with all their marriage had.

Of all the reasons Dinah poured out her love on George, there was one so tender that her eyes could well with tears at the mere thought. It was what George had done for a girl who never permitted herself to believe in her own glamour.

“I have a big mouth,” she always said, “too big to be that beautiful.”

In 1943, at a time when she was painfully accepting a tough truth—that she just wasn’t a movie beauty—Dinah met George and fell in love with him.

George saw something in Dinah, too—a radiance that put her heart, head and shoulders above the slinkiest glamour girls. She glowed with love for people, kids, animals, flowers—the whole world! She faced every day as a joyful challenge to “do the best with what I’ve got.” She vibrated with a determination to find happiness (“I don’t know where or when, but I’ll find it.”)

Now, like a star unnoticed before, she burned all the brighter. Her smile became irresistible. “There’s something about that girl,” men said. She did something to a song that made them listen. Women liked her, too. In short, the unquenchable Dinah had turned her small-time failure as an actress into an incredible success—success as a singer and, above all, a woman.

She said, “I’d never have made it without George.”

And what had George done to make it possible? The simplest, yet the only thing in the world a man can do for a woman: He told her she was beautiful! That he loved her. And he meant it. He brought her a happiness and joy that she never dreamed was possible.

From that moment on, Dinah the star became Dinah the comet. She soared in a great bright light as a singer on radio. Then in the Fifties she switched to television and starred in a weekly program rarely matched for popularity. Millions knew her face and girlish figure, raved about her glamorous gowns. The kiss she flung happily to the world at the end of each show became the flingingest sign-off in show business.

Meanwhile, in another part of the forest, husband George was trying to make his way. Compared to total obscurity, it might seem he had made it, if not big. He was an actor. He starred in no epic, received no Academy nominations, but he worked. And he reared two beautiful children with Dinah. In general, he came off as a quiet, efficient he-man, but not one to stand the world on its ear. It might have been enough. But he could no longer take being “Dinah’s husband.”

“He fought it all the way,” says a friend. “Believe me, it happened so gradually that neither of them knew—until it was too late. But I guess one morning he woke up and faced the awful truth: that if something didn’t happen, he’d be known the rest of his life only as the husband of Dinah Shore.”

George broke out in a fever of ambition to retain his identity. He put his head, heart and soul into his television series, “Cimmaron.” It died young.

He tried an offbeat jungle movie, “Watusi.” It didn’t do badly, but not great.

This year he traveled to the Philippines to make another off-beat movie on location. That’s when the marriage ran into the rough. Long separation from his wife, a simmering resentment of his role as “Dinah’s husband,” low spirits, and the ever-hovering cloud of failure began to wear him down.

If it wasn’t so sad, it might have been funny . . . George alone and unhappy in the Philippine jungle . . . Dinah alone and unhappy in her TV jungle of vine-like cables and cardboard trees. It might have gone on that way if not for the Ziva Rodann stories in the newspapers. But when George came home, when he and Dinah talked it out, the real truth emerged between them—that their marriage was suffering fatally from career separations. So they announced a divorce, not a trial parting. They knew it was over.

When Ziva Rodann found herself swept up in the muddy river of gossip, she did her best to swim away from it. “We are only good friends,” she said. “Anything more is foolish talk.” . . . One Hollywood insider echoed. “Ziva Rodann? But I understood that George was interested in Diane McBain.” And another echoed, “Diane McBain? I thought it was Madlyn Rhue.”

But at the time of this writing, Ziva’s friends—ac- cording to columnist Earl Wilson—were whispering that George had invited the “Israeli Brigitte Bardot” to Las Vegas for the New Year’s celebrations, and she had accepted. And, said the item, “anything could happen in that marrying town. (George and Dinah are expected to get a Mexican divorce.)”

It isn’t easy for people to accept the statement that something so simple as career trouble can break up a good marriage after eighteen years and two children. False rumors have flourished wildly and died. They even tried to link Dinah with another man.

“No matter what happens,” Dinah used to say, “when the spotlights are gone, when the applause has died down, I’ll have my home, husband and children.” Dinah still has her children. She still has her home, all $500,000 worth of it, although there isn’t any man around it—the man who was so nice to come home to.

And in a room of that house there’s a plaque. It’s a Gallup poll citation. It States simply that according to their poll, “Dinah Shore is one of the ten most admired women in the world.”

But as any one of Dinah’s sisters-under-the-skin could tell you: She’d trade every vote for the love of just one man—George Montgomery.