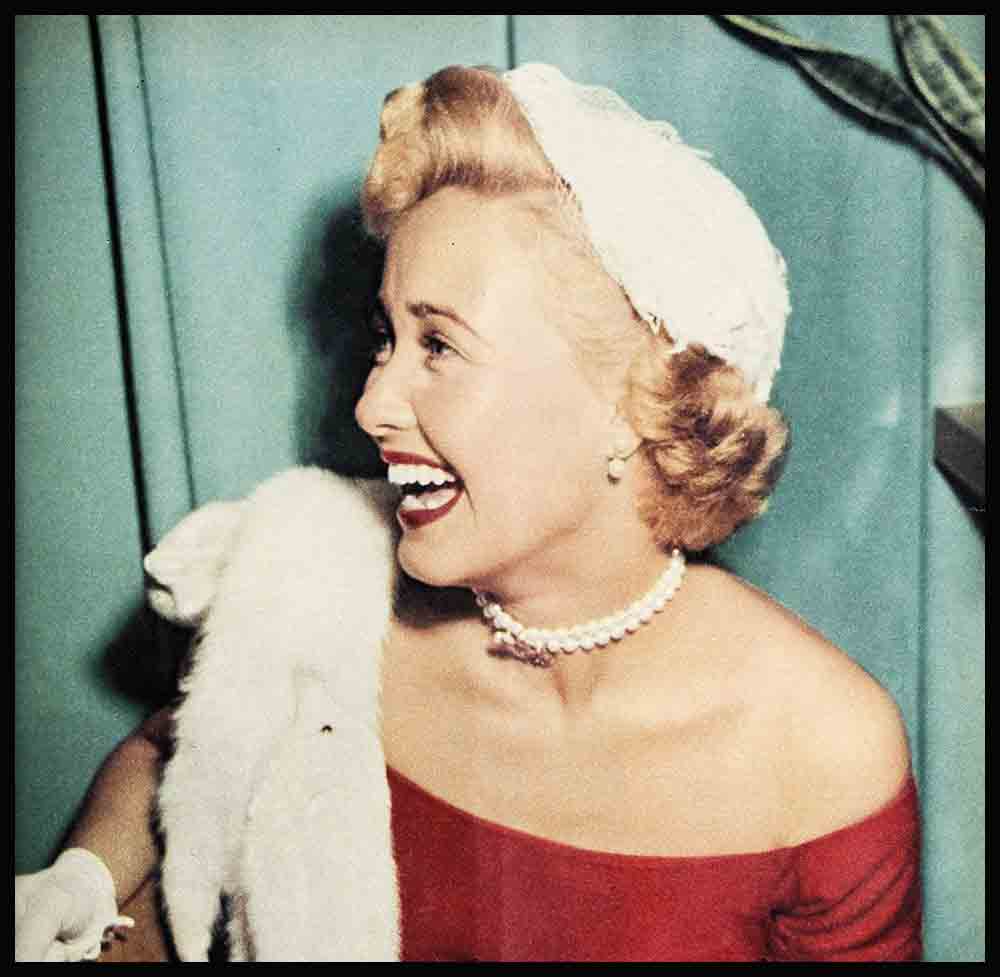 When Jane Powell was nineteen, she remarked that she would dearly love to act her age on the screen. At that time, she was portraying sweet young things approximately three years her junior. “Just my own age, that’s all I’d like to be,” Janie said wistfully. “But since I’m short and I do look young, it’s all right. My day will come.”

Jane’s day has come. And, ironically enough, it may prove a threat to her career with which she never reckoned. The once-dreaded “awkward age” is no longer a problem for child stars. Deanna Durbin shattered the jinx for all when she sailed through adolescence with grace and ease. Both Elizabeth Taylor and Jane have done likewise. However, once Deanna reached maturity, she set out to prove it through her screen roles. And she promptly wrecked her carefully built status as a big-time star.

Liz Taylor has been more fortunate. She has passed the crisis and is now established as a glamorous, exciting woman. It is Jane who must still meet the challenge set by the Durbin downfall. And for Jane it will also be difficult, for she has grown up the same wholesome type.

Deanna Durbin tried glamour and failed. What will happen to Jane Powell? How long can a star play a growing girl when she is a housewife and the mother of two? How long will the public accept her in such parts when aware of her matronly role in private life? And if she should make a change in her screen personality—what then?

Jane had a brief fling at a comparatively “grown up” portrayal as Fred Astaire’s sister in “Royal Wedding.” Her next, “Small Town Girl,” may tell the tale in full.

Her success has never given Jane a worldly, bored-with-it-all attitude on screen or off. Her friends remember the occasion when she was guest of honor at a luncheon given by a number of girls her own age. The sub-deb sophisticates were indulging in table-talk. “Well,” said one in a bored tone, “Dad finally got around to getting me my mink.”

Then Jane spoke up. She had news, too, and she was bursting to tell it. “Daddy’s getting me a suede coat. And he’s getting it wholesale!” she bubbled.

With maturity has come a new dignity. It was apparent when Jane vacationed in a popular resort town, and the local populace was somewhat shocked. “What a shame,” they said. “That horrible Hollywood makes children old before their time.” Children?

It may be equally as difficult for her fans to realize that Jane has grown up. As for Jane, she is grateful for the stardom she has achieved. It came as a surprise. She never meant to be a star. She was Suzanne Burce whose parents managed an apartment house in Portland. She made her first public appearance at the age of four—tap-dancing in a school recital. At eleven, when it became evident that she had a good singing voice, Jane began her lessons. Two years later, she had her own radio show in Portland.

When her parents decided to vacation in Southern California, the station manager suggested that she audition for Janet Gaynor’s “Hollywood Showcase” program. Jane and her family figured that it, by chance, she won, the money would help with expenses.

After her appearance, studio calls poured in. She auditioned at M-G-M for L. B. Mayer and Joe Pasternak. She sang “Il Bacio”—the same aria that won a contract for Deanna Durbin. It was then that Jane Powell began her climb to stardom.

Fortunately, Jane’s private life has been as successful as her career. And, unlike many other stars, when she says that her husband and children come first in her life, she means it. The new baby, Suzanne Ileen, adds to the responsibility at home for Jane, who has never shirked any kind of responsibility.

But soon she will return to the screen to face the maturity that has been the kiss of death for many a child star’s career . . . for Jane Withers, Bonita Granville, Shirley Temple. Now comes the same familiar question. Will Jane continue to be cast as a sweet young thing? Will her public believe her in a different sort of role? Seemingly, that would depend upon her studio. The studio can take a good guess and plan her pictures accordingly. What’s next for Jane Powell? Only you—the fans and moviegoers—can furnish the answer.