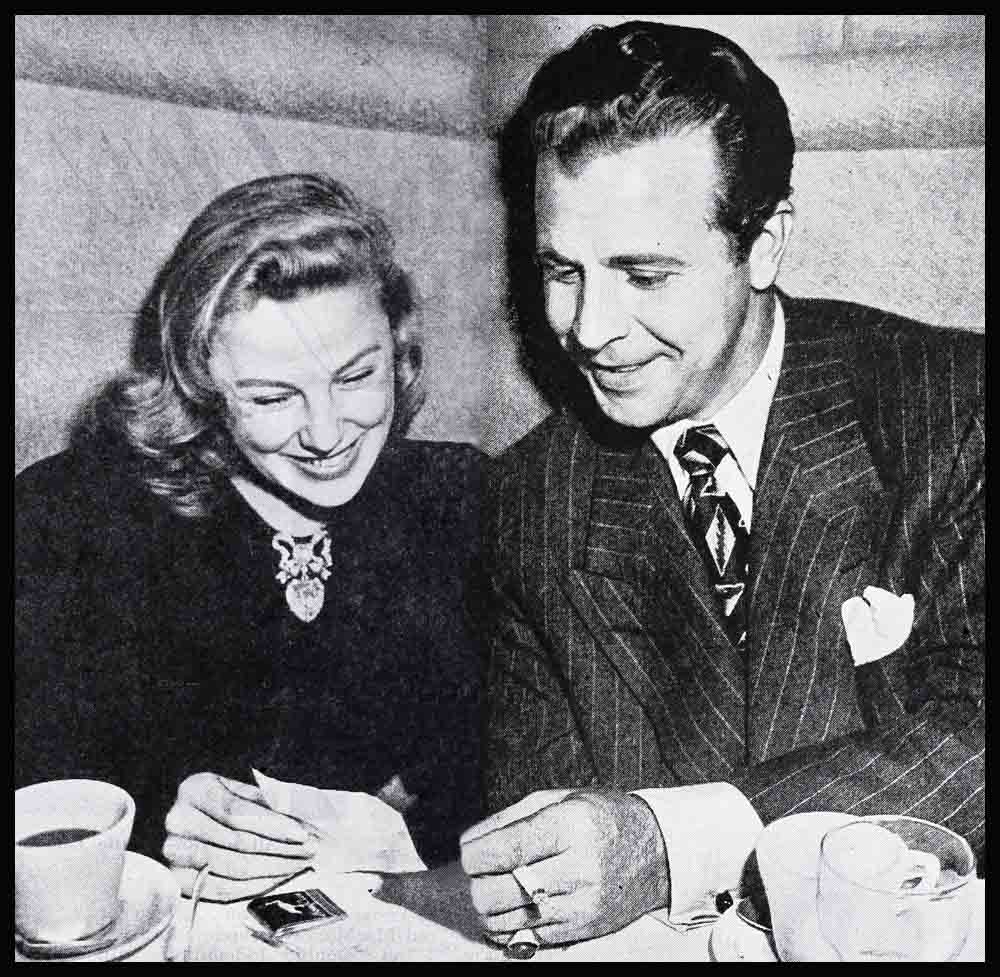 “Ask Me No Questions…”

Before I tell you what June Allyson had to say about Dick Powell, I want to tell you first what I think about the way she feels about him. I say that because I have lived longer than June (I ain’t saying how much longer!) and I think I can tell when a girl is very much in love.

And does June love Dick? Does a spring garden love the sun? It’s in everything about her. In her eyes when she softly speaks his name. In the excited little flush that comes to her face when she mentions his new successes on the radio and the screen. And it is there in the quick alertness of her attention when someone else mentions him.

Ah, yes—I’m convinced our little Junie is in love and because, it seems to me, it is the real thing, she can’t talk about it—much. As I talked with her and watched her, it was very clear to me that this is the first mature, full-blown emotion of June’s life. There have been other beaus, other crushes. There was even the excitement that she was secretly married to her friend, Van Johnson. But that blew up in smoke where it belonged all the time. There wasn’t even a spark between June and Van, except, perhaps, the nice steady glow of a real friendship between a boy and a girl.

She had come over to my house one sunny afternoon during the time Dick was away on a camp, hospital and radio tour. She looked like a school girl in a simple little suit with no make-up except lipstick and a once-over-lightly with the powder puff. After we had talked a little while about the zany new hats and other such “women talk,” I asked her point-blank:

“June—are you going to marry Dick Powell, and when?” She hesitated just a minute and I could sense the inner brace she gave herself. For there is almost a primness about June, rare in a young girl today. She believes in the good old-fashioned conventions of society and practices them.

“I can’t say anything about that,” she answered. “After all, he’s not yet a free man.”

“Let me ask you a hypothetical question, then. Assuming you do marry, what about your career?”

“Assuming I marry,” she mocked, “I can tell you quite frankly that my career would be second. I’ll do what my husband wants me to do. But of course I can hope that he would be sympathetic to my work and would want me to continue on the screen. If he were an actor it is entirely possible he would understand how I feel, isn’t it?”

Suddenly we heard someone approaching. It was Marie McDonald, looking like a million.

“I didn’t catch all that conversation,” said the stunning blonde gal, “but I heard something about marrying an actor. June, don’t ever do it—they don’t make good husbands!”

I like Marie—but I could have spanked her for that when June and I had been getting along so well. That’s the way I felt at first. But later I was glad Marie had shown up. She and June are graduates of Roosevelt High School in Yonkers and when the girls started arguing I could feel Junie relaxing.

“What’s the matter with actors as husbands?” she flared a little. “Those generalities are silly. It’s like saying that postmen aren’t good husbands, or fliers or sign painters. Some of the happiest marriages in Hollywood have been between actors. Look at Lucile and James Gleason and Mildred and Harold Lloyd and Mary Pickford and Buddy Rogers and Jeanette MacDonald and Gene Raymond.

“Actors understand each other. They understand all about the long hours and being tired and getting up at ungodly hours in the morning. And,” Junie was running out of breath, “all sorts of things!”

“Particularly if the actor’s name happens to be Dick Powell,” Marie and I both kidded her.

“I miss him, I admit it,” June said soberly. “We have such wonderful times together. Not just night-clubbing, because neither of us cares for that sort of thing, but just sitting and talking. It’s wonderful to know someone to whom you can really talk without self-consciousness or pretense.”

It was not a case of love at first sight between June and Dick. She didn’t feel her heart go pitapat and apparently he paid little attention to her in the beginning when they were introduced on the set of “Meet The People” at M-G-M.

“During the making of the picture we never played a single scene together,” said little June. “I thought Dick was very nice and cordial and easy to know—but he never asked me for a date. In fact, we discussed only the most impersonal things.”

I asked. “Then when did you first start going out with him?”

“It was a chance meeting in New York after Dick was separated from his wife,” replied June. “I came into Toots Shor’s restaurant and Dick was having lunch alone. He invited me to sit down and we had our first long talk. I got to know him better during that luncheon in New York than I had during all the weeks we had worked on the picture. It ended with his saying that he would like to telephone me when I returned home.

“Our first date was at Romanoff’s. We just sat and talked. I thoroughly enjoyed my evening. He seemed so sensible and intelligent after some of the young men I had gone around with.”

Marie said, “Goodness gracious, I think the girl likes him.”

But Junie wasn’t to be joshed. “He’s a fine person,” she said in that level-headed, sensible little way of hers.

If I hadn’t known how June and Dick feel about each other, I would never have suspected from their actions that they are deeply, deeply in love. I saw them dancing at Mocambo one evening not very long ago. June looked a possible sixteen in her little tailored suit with her blonde hair smoothly combed back from her forehead. There was none of that cheek-to-cheek business nor silly necking on the floor. They danced exactly as if they might have been brother and sister for all the emotion they showed.

I watched them closely, saw them go back to their table, and thought: Oh, well, now they’ll hold hands. But nothing of the sort. There was no flirtatious fluttering of eye lashes on her part, nor surreptitious hand holding under the table. They were engrossed in conversation, and so, so dignified that a stranger at Mocambo would never have suspected their feelings. Only June’s eyes which were frankly adoring when she danced with and talked with him showed how she felt.

June belongs to that great army of young American girls who have saved themselves for the man they love. And, in spite of the isolated cases to the contrary that you read about in the newspapers, these girls outnumber the “experimentalists” ten to one.

June has been living in Hollywood nearly two years now but she is certainly not “of” it in the typical sense of the word. She lives quietly in an apartment with an elderly housekeeper, the mother of one of her friends, who babies her, scolds her and sees that she takes her vitamins. She needs somebody to look after her. She loses weight at an alarming rate unless she has someone to look after her.

She buys her clothes in the better department stores in place of modeling the high styles created by the swankier movie designers. For June has come up the hard way and has learned that it is smart to save her money and to be prepared for the bitter as well as the sweet of movie fame.

When she was eight years old a tree fell on her and for five years she was a cripple and wore a brace.

“I didn’t want to mix with other children,” she told me. “I felt terribly self-conscious. For a time I thought there wasn’t much left for me in life. And then a very wise doctor had me swim and learn to dance. That’s how I became a dancer., I really felt I wanted to be a doctor, I was so grateful to this man who put me back on the road to recovery.”

Her story of how she went to New York, got a job in the chorus of “Panama Hattie” and “Best Foot Forward” and eventually came to Hollywood is well known.

“But I almost didn’t get the job,” said June, “even after I came 3000 miles for it. I made up for the test, put on false eyelashes, frizzed my hair and painted on the biggest mouth you ever saw. When they saw me they said, “No, no, no!”

“It was Joe Pasternak, the producer, who told me to go back to my dressing room and take off the ‘goo’ and start all over again. I’m not a very pretty girl, you know,” she said with amazing candor. “I’m at my best only when I am completely natural.”

And that June is all the time. It was completely natural that as the afternoon wore on she should begin to take a couple of nervous little looks at her wrist watch. That is, it was natural for a girl who is in love and who might be expecting a most interesting long distance telephone call.

“When does Dick get home?” I asked to help her along.

“Nine o’clock,” was her reply as quick as a flash.

So, again, you see, when a girl knows all the answers like June—it isn’t by accident or just a casual friendship. If you ask me—it’s L-O-V-E with all the letters in “caps.”