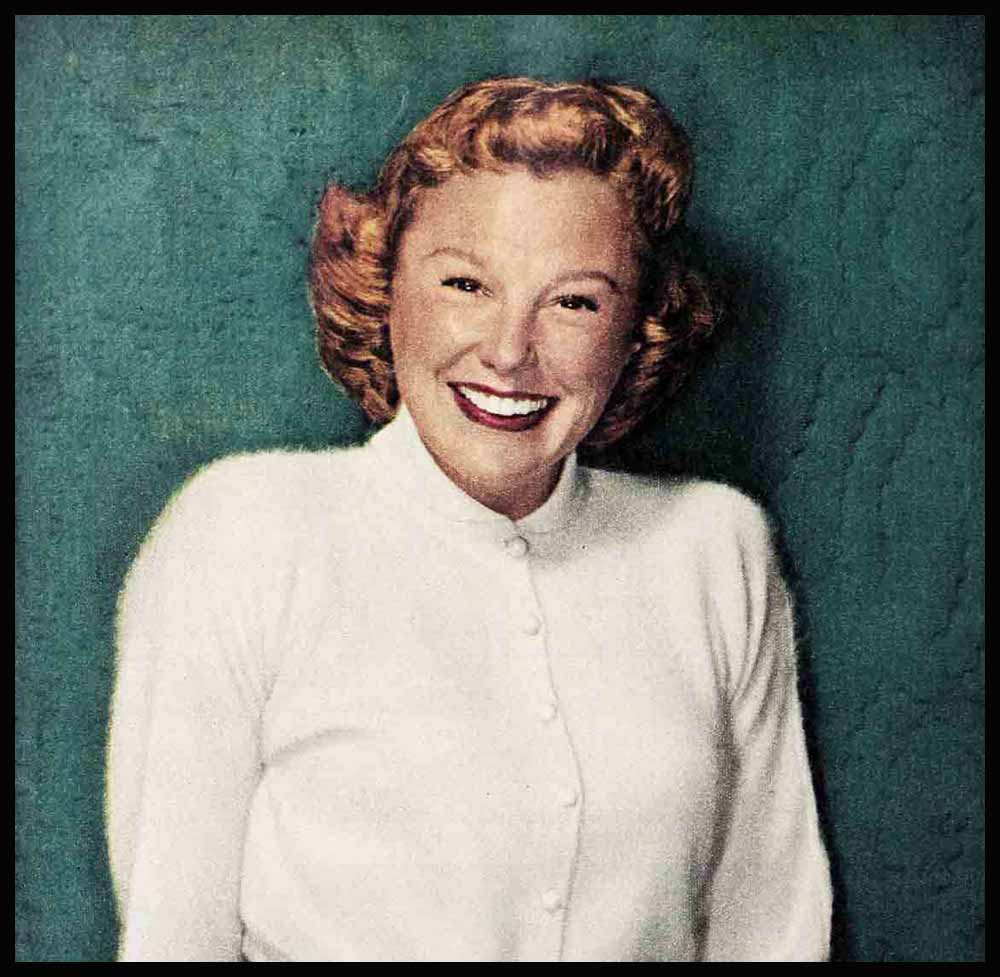 So You Think Vacations Are Fun?

Usually “vacation” is a magic word, suggesting freedom from responsibility and worry, release from ordinary routine and surroundings. It has been lent sparkle by travel posters and resort folders showing glamorous people swimming, dancing, surfing, skiing, and playing various games which require that a stick of some kind be held firmly in hand.

For two people in love, “vacation” means a second, fourth, seventh or tenth honeymoon—which automatically brings us to June Allyson and Dick Powell.

Let’s peel back the calendar to August 1945, when June and Dick were applying for their marriage license. As the documents were signed, June studied her fiance’s signature and chortled “Richard E-wing Powell! What an odd middle name that one is, E-wing!”

“I’ll have a bit of respect from you for a fine old Welsh name,” grinned Dick. “And for your information it is pronounced Youing, not E-wing.”

“E-wing,” mused the bride-to-be. “Sounds like e-gad, meaning zounds, or e-lude, meaning baffle. Must. have some significance. I’ll wait and see.”

Check off an elapse of four years and the Powells are found enjoying a fourth honeymoon at Sun Valley where both are on the ski slopes from sunup until sundown.

For a blissful month they lived, Dick and June, for each other and the fun of sliding the slopes, riding in sleighs, dipping into the glass-enclosed pool, and dancing at night.

Back at the film foundries they were able to console themselves with staring at the snow-covered San Bernardino Mountains glittering above Los Angeles until they read of a three-foot fall of snow in Idaho, whereupon they hookied to Sun Valley for a third stanza of skiing in the same winter.

“You were named E-wing, explained June to the name’s owner, “because you like the sensation of flying somewhere, on a sailboat, on a plane, or on a pair of skis.”

“Right,” admitted E-wing. “We’ll have to make this trip at least once each winter.”

Seems that he was gazing into a frosted crystal ball at the time because not until the pre-spring of 1955, six total years later, were the Powells able to find time for the trip to Idaho. Even then, plans had to be made very carefully.

June, they calculated, would have completed “Strategic Air Command,” “The Shrike” and “The McConnell Story” by the time Dick had finished “The Conqueror” for RKO. Miraculously, both would be free in the midst of the skiing season; even as some people hearken to the sound of meadow larks returning to the California countryside, the Powells could hear the sing of waxed bedslats over the white hills of Idaho.

Because Dick is a shutterbug, June also packed “equipment enough to have filmed a Miss America contest,” and all the paraphernalia necessary for painting the Great American Landscape of Sun Valley. For some months Dick has been trying to interest June in a hobby so engrossing that she will devote her hours to it with the result that she will want to make only one film, at most two, per year.

So into the luggage went a palette, the chromatic scale of color tubes, a set of pastel crayons, brushes representing the major effort of a herd of camels and a copy of Van Gogh’s biography, “Lust for Life.” (Atmosphere.)

June also took along a few afternoon dresses and a glamour number or two in case, in this most rococo of resorts, joy reigned well refined. Dick let out a cry of anguish when he realized that the heap in the entry hall was not a new grand piano in its crate but merely luggage to be loaded into their drawing room on the train.

Twenty-four hours later, shins bruised from running into suitcases and fingernail broken from moving six cases to get the one needed, the Powells checked into the Sun Valley Lodge, had dinner follower by a pair of hot showers and tumble into bed. “I’ll unpack in the morning,” were June’s last words.

Wednesday morning dawned bright an clear. Scanning the scene from the windows, Dick could almost hear the snot melt. “We’d better have breakfast and go onto the slopes right away,” he said. “God skiing isn’t going to last long at this rate.

June said that of course she couldn’t skiing that day. She had to unpack. Every sweater. Every tube of paint. Every roll film. Everything right down to the reserve package of cleansing tissue.

Her husband has learned not to protect against such tidiness. June is June which is to say that order is next to piety in book. Even if she is to remain in a hot room only overnight, she turns the in personal quarters into the Allyson palace. Apparently it s a compulsion of some king.

So, after breakfast, Dick made his way through the lobby, carefully avoiding ex-skiers on crutches, in casts and in sling and assaulted the slopes. Sky blue, bright, snow dazzling—and treacherous. There had been enough melting during each day for nearly a week, followed enough freezing at night to form patch of ice in random pattern all over the hill.

Ice is a hazard of skiing just as kelp is hazard of coastal swimming and the adolescent male is a hazard in highway traffic. One learns to use evasive tactics in coping with such things: sometimes adding to the zest of the sport.

Over the luncheon table, Dick asked the little woman how she was coming along with her unpacking.

She awarded him a glassy stare combined with a question: “How long were we planning to stay here?”

Dick spent most of the afternoon out a the slopes and returned to the hotel ruddy cheeked and replete with the joy of living.

He found June slightly less than bursting with high spirits. She had unpack all of his clothes and trappings. She filled the closets with his wardrobe an camera equipment. She had crammed to chests of drawers with her lord’s sweater shirts and all the rest of the oddment which a man—the casual gender—own and use in order to be fit to be seen. Her ingenuity had been taxed to the link and her nerves were frazzled. “Guess I have to go home,” she said with a glint her eye. “There’s no room here for me my shadow, say nothing of a few pied of luggage and their contents.”

Friday morning a major portion of the hotel staff moved the Powell luggage, and June went to work unpacking for the second time. By Friday night all was well in Home Suite Home, and June—tuckered but—told Dick, “Tomorrow I’m going skiing with you. In the afternoon. You check the slopes in the morning and find but where I’m least likely to break something valuable.”

A dutiful husband, Dick kissed his wife goodbye after Saturday’s breakfast, saying that he would telephone her the news as to which of two cafes would prove most convenient for luncheon followed by an afternoon of Swiss hopscotch.

He called just before noon. “How are you?” he asked conversationally.

June said she hadn’t noticed much change in her health during the two hours they had been apart, how was he?

“I’ve got a flash for you,” confided Dick, clearing his throat. “I’m in the hospital.”

June cried out in a voice heard clearly in Cheyenne, Wyoming, hung up the receiver and set out to locate her wounded man. Sreaking to the elevator she gasped, “Take me down.”

Down she went. On the main floor she curried through one corridor after another, seeking that ominous sign “Hospital.” She knew she had seen it the first may they arrived, but it must have been moved. Perhaps to the roof to take advantage of sun and breeze.

Returning to the elevator, she asked to be taken up.

The top floor yielded no more information than the main floor had. Somewhat steadied by her headlong exercise, June decided to ask the elevator operator where casualties could be found. Same floor on which the Powell suite was located, said the operator.

When June was admitted to the treatment room, Dick was lying under the X-ray machine. His color was poor, perspiration profuse and grin unsteady.

June rushed to him, took his free hand and blinked away tears. “Oh, E-wing!” she said.

X rays indicated that Dick had broken his left arm in two places just below the shoulder joint, involving the complex ball and Socket mechanism.

This is what had happened: Dick had been careening down one of the more precipitous slopes when, in the middle of a turn, his left ski struck a patch of ice and flipped him in a fall that Dick described—in the skiing vernacular—as an eggbeater.

Dick’s doctor was vehement in his denunciation of a man over twenty-two years old who, not having been on skis for six years, would undertake to recapture his fine frenzy with Alpine stocks. “What did you expect?” queried the M.D. acidly. “You could have fractured your skull. You could have broken your back and spent the rest of your days as a helpless invalid. Time you used some common sense, my boy.” There was more, none of it sugared.

When the doctor was called from the treatment room for a moment, the nurse told Dick, “Don’t take him too seriously. Last week he was able to remove the brace he has worn since he broke his ankle early this winter. Skiing. Second time he did it in two years.”

Because there is little point in remaining at a ski resort when circumstances prevent skiing, the Powells packed (Dick directed, June performed), and returned to Los Angeles, then drove to Palm Springs.

Add a cast, bandages and an arm sling, and you have a picture of dependence. And, if there is anything that Miss June Allyson loves, it is to be needed. She is a frustrated nurse, and she could win gold medals for extending aid and comfort to the distressed.

Suddenly, after years of thinking of Dick as the Rock of Gibraltar, impervious, irresistible, immovable, she discovered that a fracture had appeared in the granite Joyously she went to work to repair the damage.

Dick’s diet had to be supervised: plenty of calcium “to heal that arm.” His rest had to be undisturbed, “if the body isn’t bothered with other things, it mends more quickly.

June shaved her husband (electric razor), she toweled him after his reluctant tub baths (he prefers a shower), she dressed him, selecting and tying his ties, buckling his belt and lacing his shoes. At table she cut his steak into bite-sized pieces, broke and buttered his bread.

When he said rebelliously one day, “As far as I’m concerned, vacation is a doubtful word,” she had an answer.

“ ‘Together’ is another word of eight letters. I think it’s one of the loveliest words on earth. Don’t you?”

When two people in love and married have been through an ordeal, they need few words to transmit meanings to one another. A glance, a smile, the swift touching of hands speak a language eloquent and untrammeled.

A vacation can never be judged by the events that appear to have taken place but only by the secret conclusions left in a human heart. That fact makes it possible to say of the Powell adventures in Sun Valley and Palm Springs “Best thing that ever happened to them.”

They went away, two tired, nervous, confused individuals; they came back a partnership.