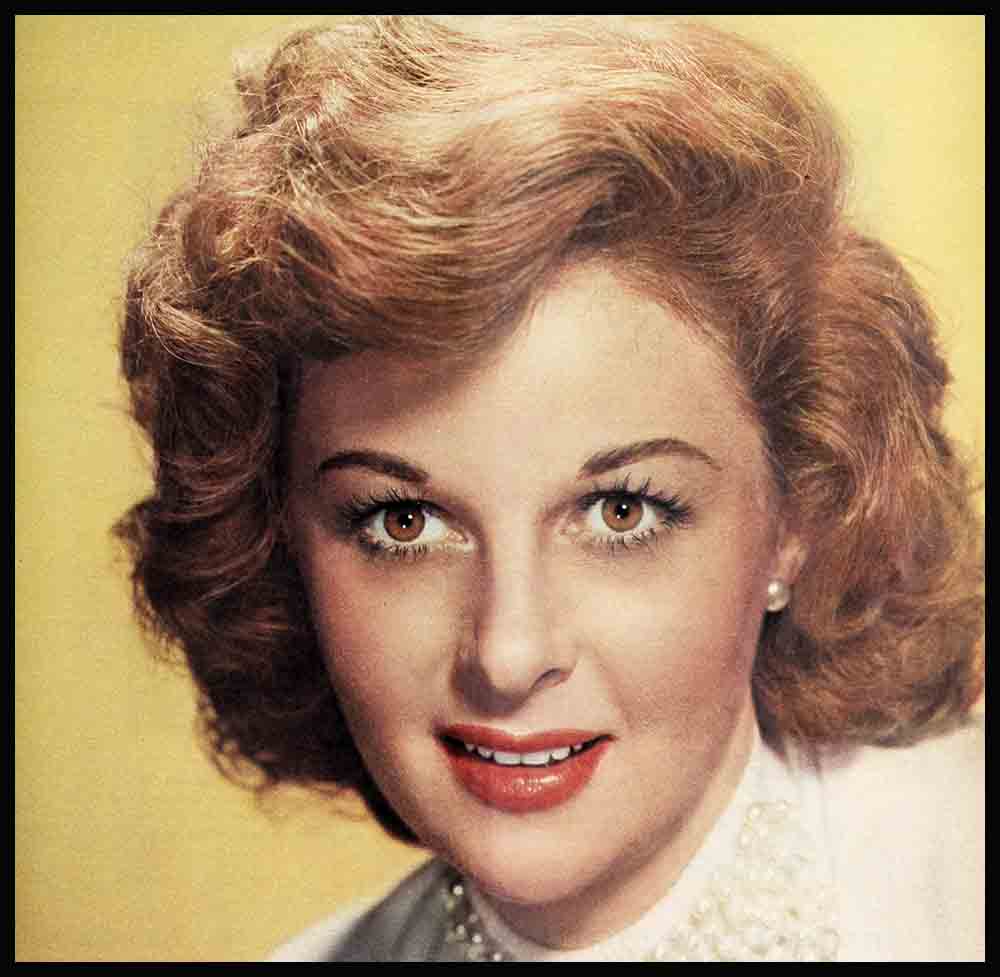 YOUR VOTES ARE IN AND COUNTED, and you—the movie-going public of America—have indicated t o Photoplay your favorite performances and pictures for the year 1952. Once again it is Photoplay Gold Medal time. This year the presentation of the Photoplay Gold Medal Awards takes place February 9 at a dinner in the Crystal Room of the Beverly Hills Hotel, with Paul Douglas as the master of ceremonies. Hollywood’s leading players, producers, directors and writers will be among the hundreds of guests present. Once again, Ralph Staub is filming this gala occasion as one of his popular short subjects in “Screen Snapshots,” to be released to theatres in the coming months. Newsreels are covering the presentation of medals to the winners. And as usual, before the dinner, at 9:00 p.m. EST, Lux Radio Theatre is presenting over the CBS radio network a one-hour dramatization of the most popular picture of the year, as determined by your votes. To the winners—to Susan Hayward, to Darryl F. Zanuck and Twentieth Century-Fox Films, to Gary Cooper, to Jane Froman, to William Goetz, to Dean Martin and Jerry Lewis, to Marilyn Monroe—and to the runners-up who are listed on the following pages, the editors of Photoplay offer their sincere congratulations.

Susan Hayward is the Gold Medal Winner as the Most Popular Actress of 1952. Her performance in the picture, “With a Song in My Heart,” carried an emotional lift to all in the audience. It was a portrayal of depth and appeal

“With a Song in My Heart” is the Gold Medal Picture. Appearing in it with Susan Hayward were Robert Wagner (above, with Susan), Rory Calhoun, David Wayne and Thelma Ritter. In Technicolor, the Twentieth Century-Fox film won praise of all. Jane Froman, left, receives special citation for her contributions to it.

“IVANHOE” was a spectacular version of Scott’s classic brought to vivid reality, with performances of outstanding merit by Elizabeth Taylor and Robert Taylor

“HIGH NOON” was a taut Western thriller, in which Gary Cooper appeared with Katy Jurado and Grace Kelly. It was an unusual example of artistry in film making

“SINGIN’ IN THE RAIN” was a hilarious funfest dealing with the silent-into-talkie era of movie history. Gene Kelly, Debbie Reynolds and Donald O’Connor teamed

“THE QUIET MAN” was a triumph for director John Ford as well as for its stars, John Wayne, Maureen O’Hara and Barry Fitzgerald. Humor mixed with eye appeal

“SAILOR BEWARE” was another in the string of hits for Dean Martin and Jerry Lewis. Based on the stage hit, it was tailored to their special brand of fun

“JUST FOR YOU” repealed the hit teaming of Bing Crosby and Jane Wyman in songs, comedy and a warm human-interest story. Ethel Barrymore and Bob Arthur scored

“BEND OF THE RIVER” had a host of stars to insure quality—James Stewart, Arthur Kennedy, Rock Hudson, Julia Adams, Lori Nelson in romance and adventure

Gary Cooper is the Gold Medal Winner as the Most Popular Actor of 1952, for his performance in “High Noon.” Long a favorite with film fans all over the world, Gary brought sincerity and understanding to his role in one of the “different” Westerns, a film which will place on lists of the all-time bests

MARILYN MONROE receives a special citation for her sensational rise to stardom during 1952. At the beginning of the year Marilyn was known chiefly for her work in supporting roles in two films, “All About Eve” and “The Asphalt Jungle.” By the end of the year, she was one of the best known of Hollywood stars. In rapid succession, she appeared in “Don’t Bother to Knock,” “We’re Not Married,” “Monkey Business” and “O. Henry’s Full House.” By the end of 1952, she was handed one of the plum roles in the top musical, “Gentlemen Prefer Blondes”

DEAN MARTIN AND JERRY LEWIS receive a special citation as a team whose pictures were continually winners at the box offices all over America. Their pictures for 1952 included the hits, “Sailor Beware” and “Jumping Jacks.” In spite of the dire predictions of skeptics that their popularity must decline, the Martin and Lewis team stayed right at the top in the favor of movie-goers, for their special brand of nonsense filled a need with patrons desiring fun and laughter as the basis of entertainment. At the end of the year, they were even more popular than ever before

WILLIAM GOETZ of Universal-International is awarded a special citation for his efforts in the development of new talent in the fields of acting, writing and directing. Many of the current screen favorites received their first encouragement—in the form of important roles in important pictures—from Mr. Goetz. Those he has helped on their way include Jeff Chandler, Piper Laurie, Tony Curtis, Shelley Winters, Rock Hudson and Joyce Holden, as well as Lori Nelson, whom the readers of Photoplay voted the winning actress of the Choose Your Star contest for 1952

Elizabeth Taylor gave haunting loveliness to “Ivanhoe” and her portrayal in this superb production was fully worthy as a follow-up for Liz to last year’s success, “A Place in the Sun.” An actress who has literally grown up in pictures, Liz is yearly gaining stature as a performer worthy of note

Joan Crawford is used to winning honors, for she has, in addition to being an all-time favorite, won many awards and citations throughout her career as a motion-picture star. In 1952, Joan made the suspenseful thriller, “Sudden Fear,” a movie wherein she again proved her prowess as an actress

Debbie Reynolds is a newcomer to the lists of your most popular performers. It was Debbie’s zestful and exuberant portrayal in the musical, “Singin’ in the Rain,” which made her one of the top-ranking actresses. In measure of years she is a newcomer to films, but Debbie has shown her worth

Doris Day won the Photoplay Gold Medal last year for her performance in “Lullaby of Broadway,” and this year she has returned to the list of favorites for her warm and sincere portrayal in “I’ll See You in My Dreams.” A smash hit in song-and-dance roles, Doris also scores in movie drama

John Wayne is among top performers of 1952 for his very real contributions to “The Quiet Man,” one of the best-liked pictures of the year. At home in Westerns and in fast-action adventure movies, John brought a natural and down-to-earth reality to his role of ex-prize fighter returned to Ireland

Robert Taylor followed his triumph in the epic “Quo Vadis” with another excellent portrayal in the Technicolor spectacle, “Ivanhoe.” A long-time favorite, Bob has become known as a capable and adept actor as well as a romantic ideal. His name on a movie marquee is a quality guarantee

James Stewart portrayed a Western hero in the outdoor adventure film, “The Bend of the River,” and his own style of deliberate underplaying was a major reason for the great success of the picture, which landed on the list of the most popular films. He’s a repeat winner from past years, too

Stewart Granger came to America from England with his reputation solid as an actor, and he lived up to everyone’s expectations with his performance in “Scaramouche,” a movie in which he combined a devil-may-care gallantry with just the right touch of romance. He performs with wit and warmth