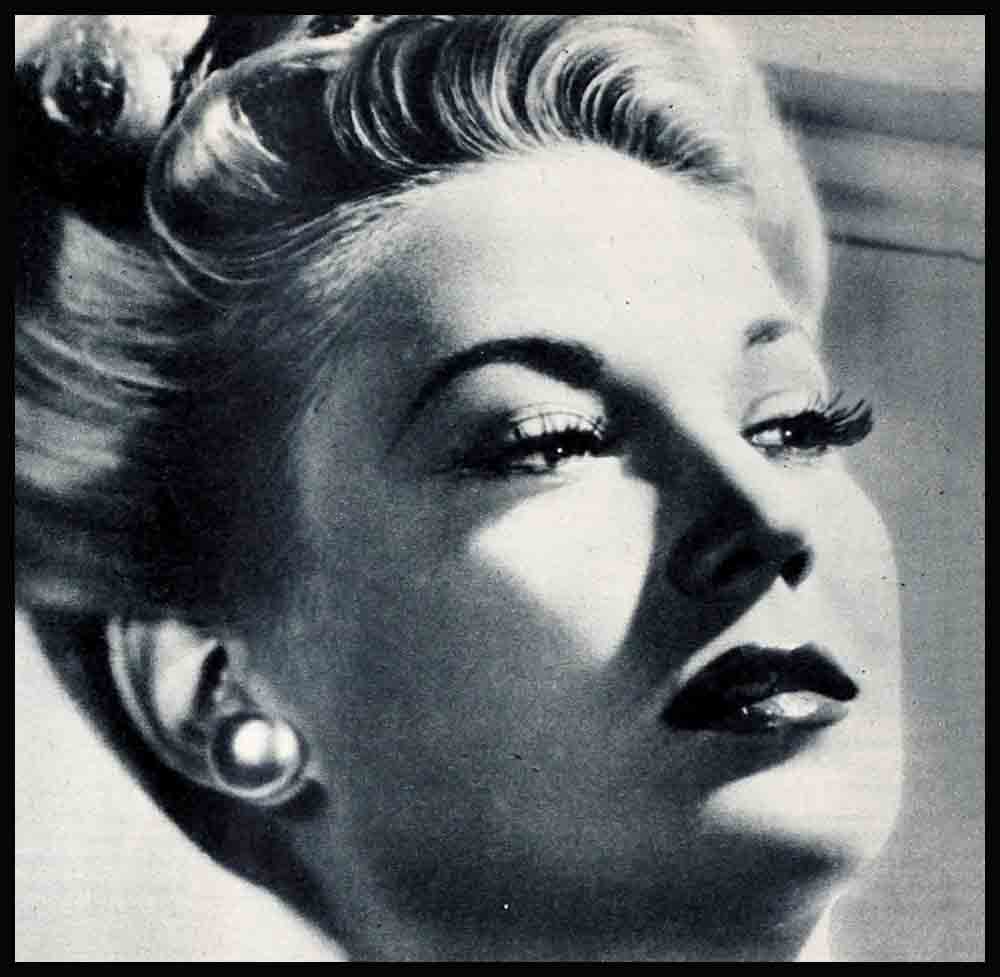 TIME was when the ability to look entrancing behind the ribbon counter or at a Hollywood soda fountain was the sure road to motion-picture success. But nowadays, a gal has to know how to act.

Thus, with a minimum of effort, we come to Louise Allbritton. And, as you can see by the accompanying portrait, the prospect is delightful.

Miss Allbritton is part of Hollywood’s “you-gotta-show-’em” or “the industry has become adult” phase. Though she is stately, blonde, and possesses a lovely face and a fine frame, her main attraction to the boys in the back room is that she can handle any part from a beat-up grandmother to a lisping ingenue. At present, due to some unexpected dynamite on celluloid called “San Diego, I Love You,” she is being touted as the logical successor to the comedy crown of the late Carole Lombard.

It all began in Texas, where her father is a mogul of sorts, owning the entire traction system of Wichita Falls and a healthy interest in a nationwide bus outfit. The immediate result was that Louise’s mother shuddered when she heard her daughter lapsing into the drawn-out diction of the plains.

The treatment for the malady was a public speaking course, in the study of which the girl met up with one Wm. Shakespeare, a wordy individual but good. So good, in fact, that Louise not only lost her accent but acquired a passion for biting a backdrop.

High school and two years at the University of Oklahoma followed. For Allbritton, they were a procession of dirty stages, flats which wouldn’t stay where you put them, make-up and the learning of lines. Then, in due and natural course, she enrolled in the Pasadena Playhouse, where she took the usual two-year regimen and spent another twelve months in post-graduate work. Last spring the head men of Pasadena proved how highly they thought of her by naming her the outstanding alumna of the institution and awarding her the plaque which goes with the kudos. This, incidentally, is the first time the august body has deigned thus to honor a woman.

When she was an undergraduate at the school, however, she worked like a dog. And Hollywood was not exactly idle. Hollywood made overtures, begged and pleaded for Allbritton to test, at least. But she would have none of it. She was learning her trade—and father was conveniently sending a check the first of every month.

Finally, though, she decided the time had come. She charged across the bridge from Pasadena, found herself an agent and began to make the rounds. It was then that her height, which had previously not bothered her, became a question of some interest. She was five-seven. Her agent was five-four. When they entered an office, it was as if she were bringing her baby brother to see about a part.

The difficulty was solved by Louise’s wearing flat heels and looking delicate and the ten-percenter acquiring a pair of built-up brogues. A role in a B picture immediately came about, followed by a contract at Universal. There she at first managed to hold her own opposite Abbott and Costello and, in an unprecedented move by the studio script writers, won John Wayne from Marlene Dietrich in “Pittsburgh.” After this triumph—true to Hollywood tradition—the Universalites threw her into two also-rans “Fired Wife” and “Her Primitive Man” with Robert Paige. Much to everyone’s surprise, however, Miss A. and Mr. P. did such a pleasant job of footage-rescuing that the public was enchanted and the coffers rang gaily. It was this happy condition which caused the front office to take another look and toss Louise into the aforementioned “San Diego, I Love You” and the Lillian Russell part in “Bowery To Broadway.” And they do say that in the latter she makes Russell herself look like a piker.

Louise has what is known in the trade as “flair.” What she does she does dramatically, whether an audience is present or not. At one point in her career, for example, she decided that she had not the proper attitude towards her art. She should starve a little, learn what the garret was like, feel the pangs. Therefore, she conscientiously spent every sou when it arrived from home, so that she, too, could know the delicious sensation of being broke.

Off-screen, she is either the essence of patrician dignity or the Texas tornado she was in her childhood. Then, her delight in whooping it up with a bunch of the boys resulted in having her nose broken three times. The first of these abrasions occurred when she was tackled going around right end and landed against a fire hydrant. The second happened when she did all the approved things on a jackknife but failed to notice that the diving board was also sticking its neck out. The third took place when she achieved such power on a high dive that she ploughed up the bottom of the pool. As an adult, she stopped breaking things but she’s still the left half of the neighborhood team.

In her home-on-the-range mood she wears dungarees that would shock Crosby. She has a temper which flares like thermite for five minutes, accompanied by a voice reaching the last row in the balcony with ease. She has a childlike impatience and hates to wait for men, women or small children. She can ride a horse as only a Texan can and swim as if there had been a lake in her own back yard.

Due to her upbringing, she has very little idea of the value of money. She will see a hat she likes, buy it and discover that she has nothing to wear it with. This results in her investing in a new outfit. It also results in such pangs of conscience that she buy s War Bonds like crazy to soothe it.

When she is being patrician, there isn’t a more striking woman in town. Then Allbritton’s fly-away hair goes into smooth rolls and pomps. Her clothes become perfectly fitting suits and fantastic, wonderful hats. She wears superb jewelry. She glides into restaurants and the wolf pack howls. Whatever she does—she does with “flair.”

With this more mature attitude, she realizes that all she needs to be a great star is one role which will bring to the public attention that she has both ability and training.

Then, too, she exhibits the qualities which make her one of the most likable people on the screen. She refuses to let a friend who works late in a broadcasting studio come home alone in the rain. She drives up and waits outside until the gal is through. She takes time out to coach a girl who is auditioning for a part. Any present she receives must be shared with her group of intimate friends.

Of greatest importance to her right now is the plight of our soldiers overseas. For Louise, last spring, took a tour of the Mediterranean theater of war. She saw things there which both thrilled and revolted her. Among the latter was the evidence that many American women are not holding up their end of the fight, keeping their promises to men in uniform and waiting loyally for their return.

Louise heard innumerable stories of broken engagements and marriages and so on while at the fighting fronts; she encountered even more of them when she sat at a phone in New York, calling personal messages from the boys to their women at home.

Having seen with her own eyes what the men themselves were doing at Cassino, for instance (she was closer to the actual hand-to-hand fighting there than any of the other entertainers), Louise was definitely worried.

The tour as a whole had the unforeseen effect of sobering her immensely. She saw soldiers die while she was holding their hands. She watched their faces light up when she appeared—as if she were a Vision of what they had left behind. She saw the tremendous respect the men in uniform had for a little guy named Ernie Pyle, met him herself and was honored by being mentioned in one of his newspaper dispatches.

She lived with the courage and humor and valiant spirit of America overseas for months and she returned with some of her own laughter quieted. She knows the soldiers want to laugh; that’s one of the reasons why she’s playing comedies at this point.

But, she knows, too, that what they are doing is no laughing matter and she wants desperately to go abroad again, to do what little she can to make their lot more livable.

Most Texas tornadoes have a way of getting where they want to go. Don’t place any bets that this one with the initials L. A. written in the clouds won’t do likewise, be it in the Hollywood heavens or over a lonely jungle swamp.