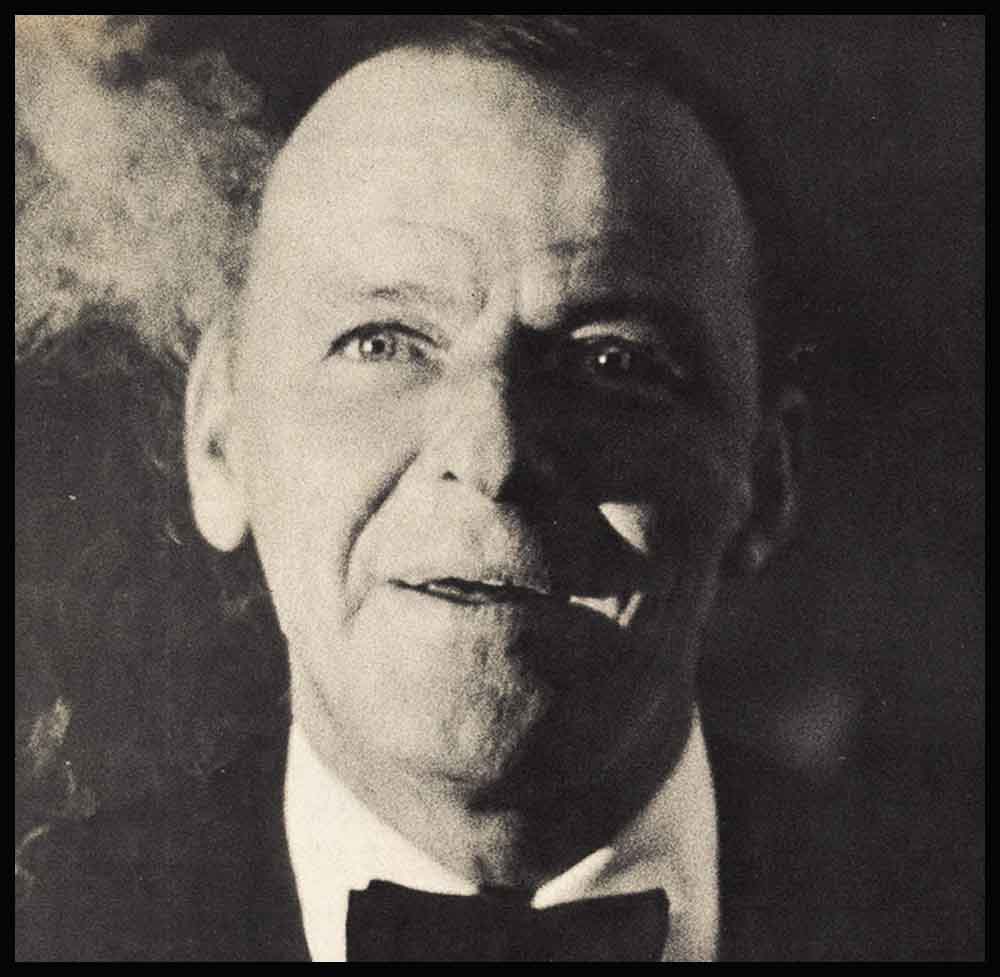 The Frantic Life Of Frank Sinatra

MIA MUST MERGE OR FRANK WILL LOSE THE URGE

There is a desperate urgency in the speed of his movements—a frenzy which causes his friends to sometimes halt—just to catch their breaths. Frank Sinatra slowed down once; it cost him professional oblivion. Since then, he moves and thinks and acts all in the same few seconds. And he loves with this same ferocity. Mia Farrow was never a girl to dawdle over things that had to be done. Still, she had never been pushed. Two years ago she was introduced to Frank Sinatra . . . they began dating, and before long the public and Frank clamored to know what Mia was thinking. When they sailed off on that much publicized and criticized cruise, Mia probably was contemplating her decision … but there is still no word, Now, Sinatra is not a man to sit still. After his quickie divorce from Nancy in ’51, and his feet-first marriage to Ava Gardner which lasted only a couple of stormy years,

Sinatra “chased the skirts,” as his songs often say. He did the “Pal Joey” bit to the hilt. In ’59 he slowed for a while to woo Juliet Prowse—but she wouldn’t abandon her career, so he gave her notice and moved on.

Now he’s slowed to court Mia, but that old restlessness is not about to be abated for very long.

If Mia doesn’t hook him now . . . when she finally tums to say “yes” Sinatra may have continued on his frantic way.

“Frank is his own man,” one friend has said; “no gal ever tells him what to do.”

2- An only child, was already spoiled at 3; folks saw him as future engineer.

7- His top physical condition, enunciation, feel for meaning of lyrics earned him “The Voice” tag.

8- In ’43 he hit Hollywood where he did p. a.‘ s, below with Louella Parsons, 2 regular radio shows—Hit Parade, B’way Band Box—plus making movies.

9- More and more he became involved in the glamour worlds of H‘w‘d and N Y. Here he clowns with Bing Crosby, Bob Hope at a golf tournament.

11- In ‘46 he had whirl with Lana Turner after trouble at home; but rift mended same yr. when he spotted Nancy in night dub and sang to her.

12- Frank’s flings with Lana, Marilyn Maxwell, others were “embarrassing” for Nancy but when he flipped for Ava Gardner in ’49, began traveling with her, Nancy knew she could never get him to settle down and finally conceded to a divorce.

13- Seven days after Frank’s Vegas divorce, he and Ava wed in Philadelphia, Nov. 7, 1951. “Secret wedding” turned into brawl, with cops unable to control mob. “We finally made it,” said Frank.

14- After 2nd marriage, career had faltered, but he got most mileage out of ‘53 Oscar for “Best Supporting Actor” in Hollywood history. (W. Donna Reed.)

15- Humphrey Bogart, Lauren Bacall, Frank were pals. After Bogey’s death, Sinatra dated Lauren until he read they planned to wed.

16- The yrs. after split w. Ava were unhappy, but he created clan, spent time with his kids (he, S. Davis took them to Disneyland) to fill days.

17- Frank has always looked out for his parents. He recently took Mia Farrow to their N. J. home, which he bought for them, to try mom’s cooking.

18- In ’60 he had his own TV show on CBS, which proved to be a failure. Here he portrayed an old Italian immigrant in one of his various skits.

19- When Frank likes someone, he can’t do enough for them. He does his share of charity work, too—at ’62 preem he played host to handicapped kids.

21- Just two months after Frank, Jr. made singing debut (below) he was kidnapped (Oct. ’63). Trial proved it wasn’t a planned publicity stunt.

22-1965 showed Frankie boy is bigger than ever. His stint w. Davis on NBC’s Carson Show was hit; 3 NY concerts proved he out-sells the Beatles.

3- The House I Live In, ’45. He won special Oscar for this short on social and religious tolerance.

6-. From Here To Eternity, ’53. Frank begged for part of Maggio, his great comeback.

7- Young At Heart, ’54. Frank, a “lost” song writer, gets moral support from Doris Day, who proves her love true.

8 Not As A Stranger, ’55. Offers began pouring in after dramatic role w. Bob Mitchum.

10- The Man With The Golden Arm, ’55. Frank goes through withdrawal pains as he tries to give up dope. Kim Novak also stars.

12- The Pride And The Passion, ’56. He hauled cannon around Spain with Sophia Loren; Around World in 80 Days followed.

15- Con-Can, ’60. Shirley MacLaine, Frank were riot in this musical. (Shirley was adopted by the clan.)

23- WB’s None But The Brave, ’65. This marked his debut as movie director (critics panned film). As a pharmacist’s mate, he had to amputate Jap’s leg.

25- WB’s Marriage On The Rocks, ’65. He learns jerk from Davey Davison after divorcing Deborah Kerr. His next: Para.’s Assault On The Queen.